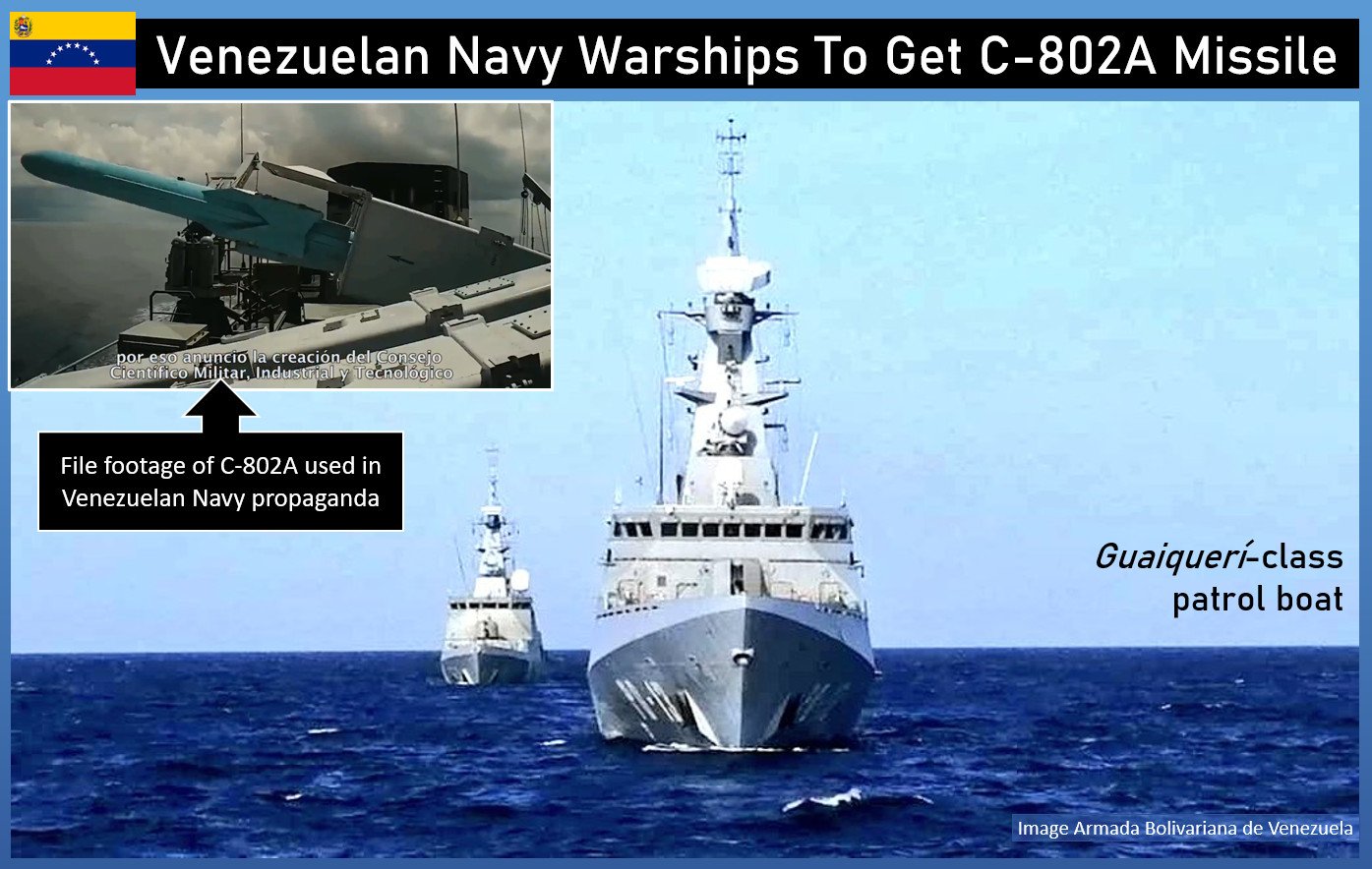 Venezuela’s propaganda videos are showing off warships armed with new Chinese-made anti-ship missiles. The C-802A missile, supplied by Beijing to the Venezuelan Navy, is designed to take out surface ships at extended ranges. The sea-skimming missile is generally analogous to the Harpoon. This arms deal should greatly increase the reach and potency of President Nicolás Maduro’s navy.

The acquisition was revealed on Sept. 25 by the Venezuelan Navy (formally known as the Armada Bolivariana de Venezuela). Footage of one test firing is now being used in propaganda videos posted online, including by Maduro’s official Twitter account (in Spanish).

The video footage is not actually of a Venezuelan Navy ship. It is taken from a Royal Thai Navy test launch of the C-802A missile. That launch, from the Thai Navy’s frigate HTMS Kraburi, can be viewed on YouTube.

But this does not mean that China has not supplied the system. Misleading images are part and parcel of Venezuelan Navy propaganda. For example, the same video shows a Venezuelan Type-209 submarine, when in fact their boats have not been to sea in years. But the lack of images of it aboard a Venezuelan Navy ship does suggest that they have not yet equipped their own ships with the missile.

According to open sources, the missiles are likely to equip Venezuela’s Guaiquerí-class patrol boats. These are Spanish built Avante 2200 combatants and were delivered without anti-ship missiles. This makes sense because in June 2017 the Venezuelan Navy was taking steps to equip two unspecified offshore patrol vessels with the missile at the sum of $2.9 million. The Venezuelan Navy has three Guaiquerí class ships, so it is possible that one will be left without missiles.

Meanwhile, Venezuela’s two remaining Italian built Lupo-class frigates are fitted for Otomat Mk 2 missiles, as are some missile boats. The Lupos are the most capable warships in the Venezuelan lineup, but are increasingly dated. The other modern warship, the Guaicamacuto-class patrol boats, are optimized for littoral operations and do not have a missile armament. It was one of these ships, Naiguatá (GC-23), which was lost on March 23, 2020. She was attempting to stop the ice-hardened cruise liner RCGS Resolute when the two ships collided. The warship lost the encounter and sank. RCGS Resolute suffered some scratches.

Venezuela’s armed forces have been hit hard by the country’s economic woes, and by international sanctions. They have, however, been able to source advanced weapons from Russia and now China. As well as the C-802A anti-ship missiles, China has been supplying small arms and general equipment. This acquisition is a reminder that despite their economic and internal challenges, they are still focusing on weapons to take on external adversaries.