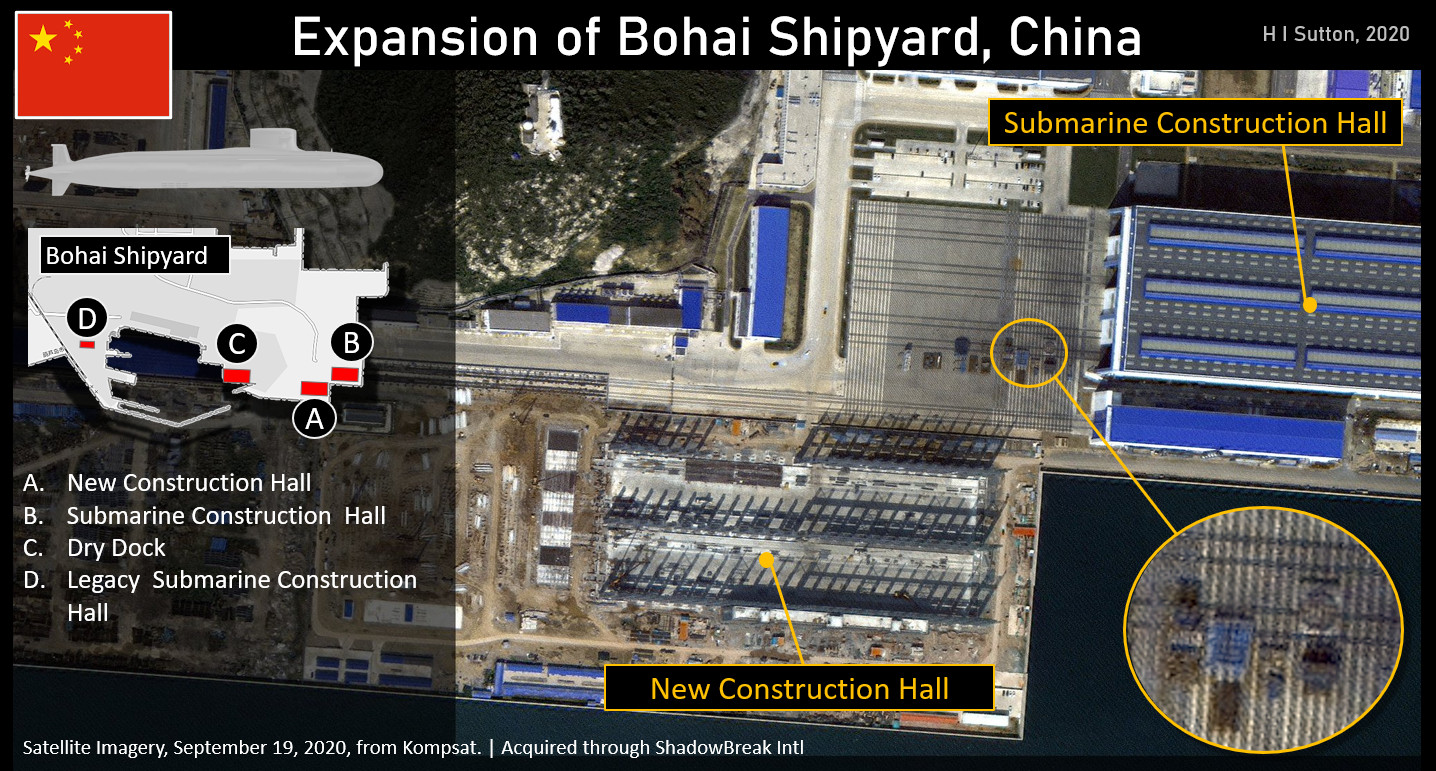 As China pushes to become a blue-water power, nuclear-powered submarines are critically important to Beijing’s plan. Historically the Chinese Navy’s (PLAN) nuclear-powered submarine fleet has been constrained by its limited construction capacity. There is only one shipyard in the country up to the task. But that yard has been undergoing a massive enlargement. And now, recent satellite imagery suggests an additional capacity expansion.

China’s nuclear-powered submarine fleet was already expected to get much larger in the coming years. This latest development suggests that China could pump out submarines at an even greater rate.

Just how many nuclear submarines China will build over the next ten years is a hot topic. The Office of Naval Intelligence (ONI) recently forecast China’s submarine fleet to grow by six nuclear-powered attack submarines by 2030. Other observers, such as retired Capt. James Fanell who was Director of Intelligence and Information Operations for the U.S. Navy’s Pacific Fleet, place their estimates even higher. What seems clear is that the number of nuclear submarines will increase.

Analysis of commercial satellite imagery reveals work on a new construction hall at the Bohai Shipyard at Huludao. The building appears to be essentially identical to the one built there in 2015. That is widely believed to be for the construction of a new generation of nuclear submarines.

The new hall is estimated to be large enough to allow construction of two submarines simultaneously. When added to the other hall recently constructed, that would allow four boats to be in the sheds at once. And there is another much older construction hall at the other end of the site which, if still active, could add another. So four or five boats at once.

China’s naval growth has not gone unnoticed in Washington. In response, the U.S. Navy will have to adjust. Outlining the proposed Battle Force 2045, Defense Secretary Mark Esper said that the U.S. must begin building three Virginia Class submarines per year as soon as possible. This would build a “larger and more capable submarine force”. The proposed force will include 70-80 attack submarines, described as “the most survival strike platform in a future great powers conflict”.

There are three new classes of submarine which might be built at Bohai. The most straightforward is the Type-09IIIB (also written Type-093B). This is an iterative improvement on the current Type-09IIIA Shang-II Class submarine. The main improvement expected is the inclusion of cruise missiles in vertical launch tubes. These will allow it to carry an increased load of cruise missiles, improving its strategic strike capability. The YJ-18 cruise missiles are generally analogous to the Russian Kalibr family of missiles. China already operates Kalibr from some of its submarines.

More advanced than the Type-09III family is the next-generation Type-09V Tang Class (aka Type -095). This is expected to be everything the Type-09IIIB is, and also stealthier.

The third projected type is a next-generation ballistic missile submarine (SSBN). the Type-09VI (Type-096) will follow the current generation Type-09IV Jin Class (Type-094). They are expected to augment the six Type-09IV instead of replacing them, leading to a net increase in China’s SSBN fleet. The 2020 China Military Power Report to Congress projected an increase to eight SSBNs by 2030.

At this stage we are still learning new details of the Bohai shipyard expansion. We have yet to see any submarines roll out of the new halls. And it is possible that the newest shed may be intended for some other purpose. But the takeaway is that China is transforming its submarine construction capabilities. The work at Huludao will remove the physical constraint which previously limited their nuclear navy.