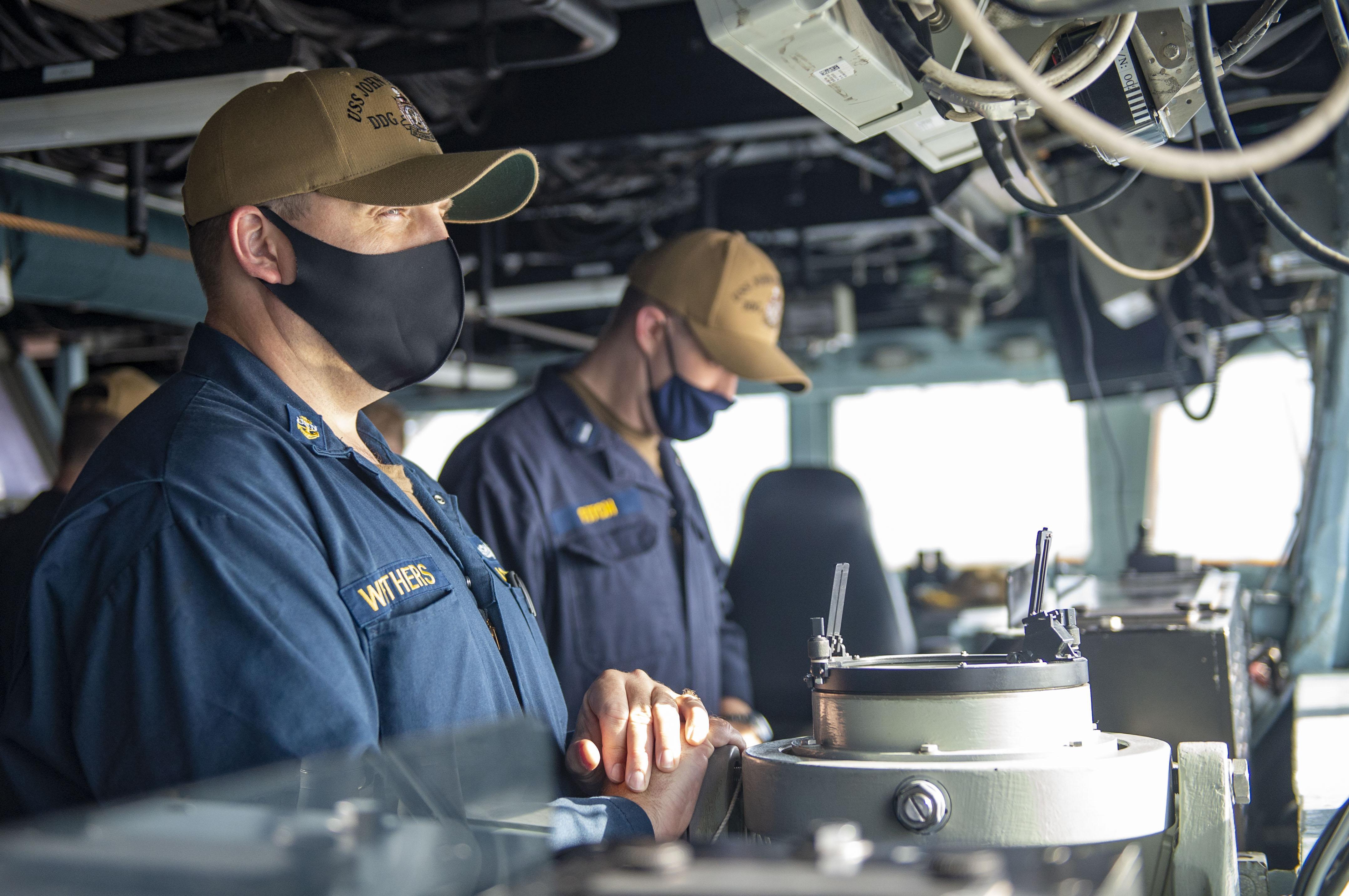 Chief Quartermaster David Weathers from Hines, Ore., assigned to the guided-missile destroyer USS John Paul Jones (DDG-53), stands watch in the pilothouse during a replenishment-at-sea on Sept. 29, 2020. US Navy Photo

The Navy released the third iteration of its guidance on how to continue operating a global navy in the midst of a global pandemic.

Vice Adm. Phillip Sawyer, the deputy chief of naval operations for operations, plans and strategy on the chief of naval operation’s staff (OPNAV N3/N5), told reporters today that the Navy had come a long way since the pandemic first hit USS Theodore Roosevelt (CVN-71) in March and that the latest updates to the Standardized Operational Guidance, published Wednesday, were based on all the scientific and operational lessons learned gained in the last seven months.

“Though the pandemic has changed much of our daily lives, what’s not changed is the Navy’s mission to protect America at sea. We can’t do our mission unless we protect our people, and we must and we can do both,” he said.

The update to the guidance notes the great importance of personal responsibility, noting that one person’s bad judgment can put an entire crew and their entire mission at risk. It also clarifies restriction of movement (ROM) sequester procedures, which are used ahead of deployments and in other situations where personnel are being moved around in a COVID-free bubble; incorporates operational lessons learned related to operating in a COVID environment; and adds a section on how to conduct contact tracing on a ship.

Sawyer said the Navy has learned how to keep doing its mission in this pandemic, but it “is a challenge and comes at a cost.” Rather than sailors being away from their families for just the length of a deployment, they’re now away for extra weeks or months as the sailor conducts a 14-day ROM sequester, then reports for final pre-deployment training and certification, and then conducts the deployment. Additionally, some sailors aren’t able to go on any port calls, and those who do are limited to safe haven port call locations for short durations.

“It’s a challenge, there’s no way around it. To protect our people, to make them as safe as possible and to conduct the mission that the nation expects of the Navy, we have had to put that additional time away from families onto our sailors. And so that’s why [Navy Surgeon General Rear Adm. Bruce Gillingham] was talking about mental health and the resiliency, as was [Chief of Naval Personnel Vice Adm. John Nowell], and all the things we’re trying to do to mitigate the impact on the crew and the families. We know we can’t get it down to zero, and that’s why leadership at the deckplate level and throughout all chains, on the ship, at the squadron, at the fleet commander, and here up to the CNO keep a very, very watchful eye and are asking a lot of questions” to make sure sailors and their families are doing alright during this time.

Still, Sawyer made clear that, despite the cost, the procedures work. 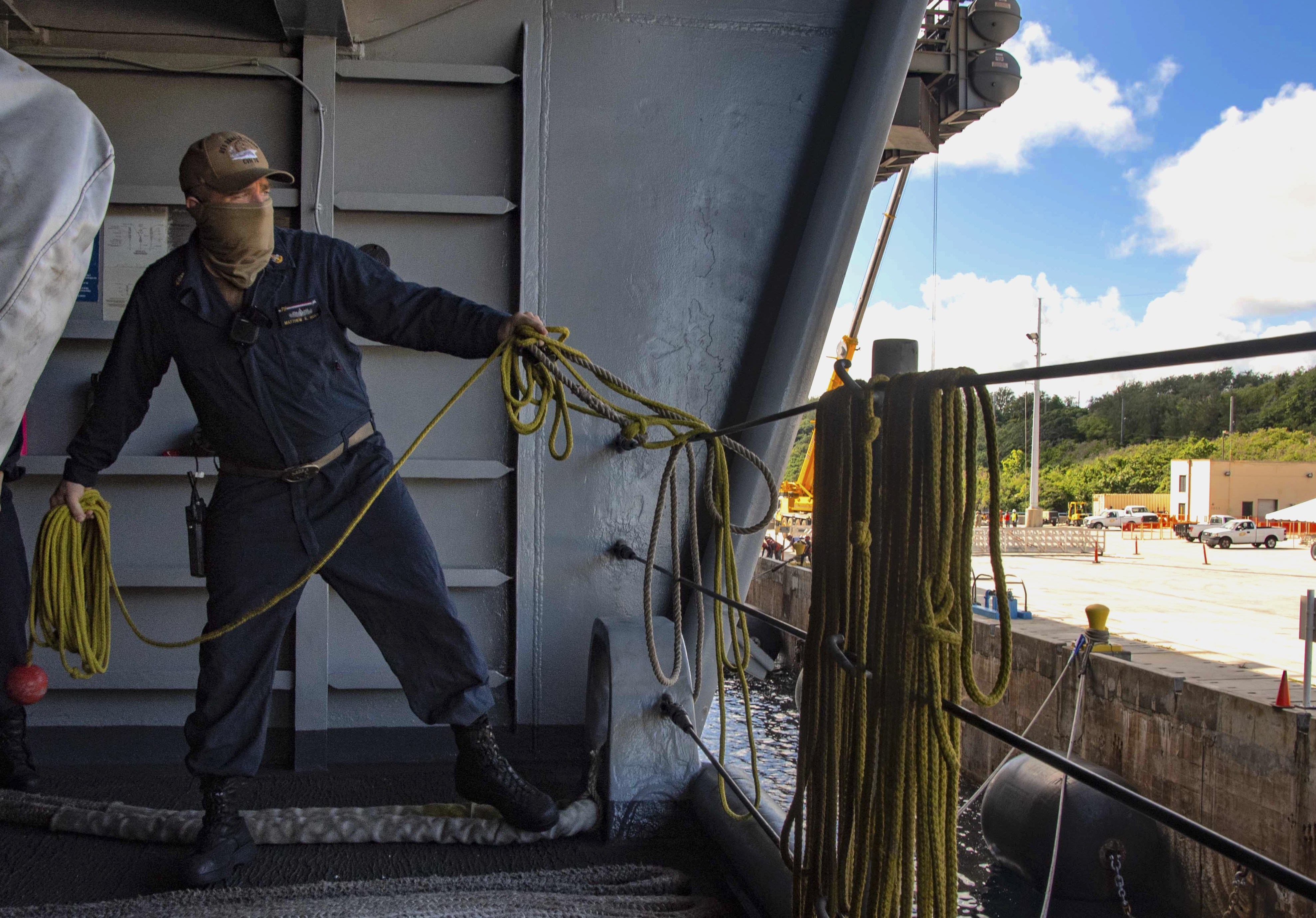 Senior Chief Boatswain’s Mate Matthew Ross prepares to throw line from the aft sponson of USS Ronald Reagan (CVN-76) as it pulls in to Guam on Aug. 22, 2020. US Navy Photo

“You saw not too long ago a press report where [USS Ronald Reagan (CVN-76)] had some COVID positives onboard. And our procedures, our mitigation, our process changes, everything we’ve learned since TR allowed Reagan to contain that number of COVID people, positive, onboard to a handful of people. And they continued operations,” Sawyer said.
“My point about that is that what we have learned about COVID and have made into operational guidance for our units works. It’s not easy, but it works.”

Sawyer noted that the updated guidance outlines four aspects of a good ROM sequester to get the deployment started off COVID-free: everyone needs to be tested on the way in, so any asymptomatic or pre-symptomatic sailors can be pulled for proper isolation; the ROM needs to last 14 days; the ROM needs to be a quality isolation, meaning the sailors take it seriously and don’t put themselves or others at risk; and they need to be tested on the way out.

“Those four aspects enable us to have the most confidence we can in that our sailors, as they start on their deployment, are COVID free.”

Once on deployment, the guidance helps outline how to stay free of the virus based on lessons learned in the Navy and in the world more generally since the pandemic started.

For example, Sawyer told USNI News during the call that they’ve learned a lot about asymptomatic spread of the virus, which informed some of the updates to the Standardized Operational Guidance.

“Our knowledge of COVID, significantly more now – particularly that asymptomatic transfer vector. We really didn’t understand that when we had the Kidd and the TR, which was March and April. We really understand it now.”

As a result, all kinds of shipboard processes have been changed. Personal protective equipment such as facemasks are required on the ship, even after everyone conducts a ROM and takes a COVID test prior to deployment. Social distancing is enforced, with the crew segregated into cohorts and watch teams that have little interaction with each other, so that an outbreak among one watch team could, through separation and good cleaning practices, avoid infecting other watch teams. Meal hours are staggered and limitations are placed on how many people can be at the gym at once.

Even little things are helping, Sawyer said, such as one-way passageways where sailors walk up on the port side and down on the starboard side, and a requirement for sailors in large berthing areas to sleep head to toe to avoid any asymptomatic spread.

As for contact tracing, he said, it’s “as much art as it is science, and you need to train people how to do it.” But the more trained contact tracers there are on a ship, the more mindful the crew tends to be about following COVID mitigation measures and self-reporting potential symptoms, which Sawyer said is important for avoiding any further outbreaks.

“While we have had outbreaks underway, they have been very small numbers and they’ve been identified very early. And as Adm. Sawyer pointed out, contact tracing has been carried out and so those really have not had a significant outbreak really since USS Kidd,” Gillingham, the surgeon general, said during the call.

Gillingham noted that these mitigation efforts are keeping sailors physically healthy but can take a toll mentally, so the Navy is beefing up its mental health services and making them more accessible to sailors in the fleet.

“Currently, of all of our mental health professionals, about 30 percent are actually with fleet units and not working directly in one of our medical treatment facilities. And we have found that this has had significant benefit in the sense that it lowers barriers to access, it decreases stigma, and we’re seeing that sailors are now more comfortable coming forward – they know these professionals, they know that they live and work with them, and so they’re coming forward earlier. Obviously the goal is to, for those who are experiencing stress, to have them come before things really require significant medical intervention or even medevac from the ship. So really shifting that continuum of care to the left, emphasizing resilience,” he said. 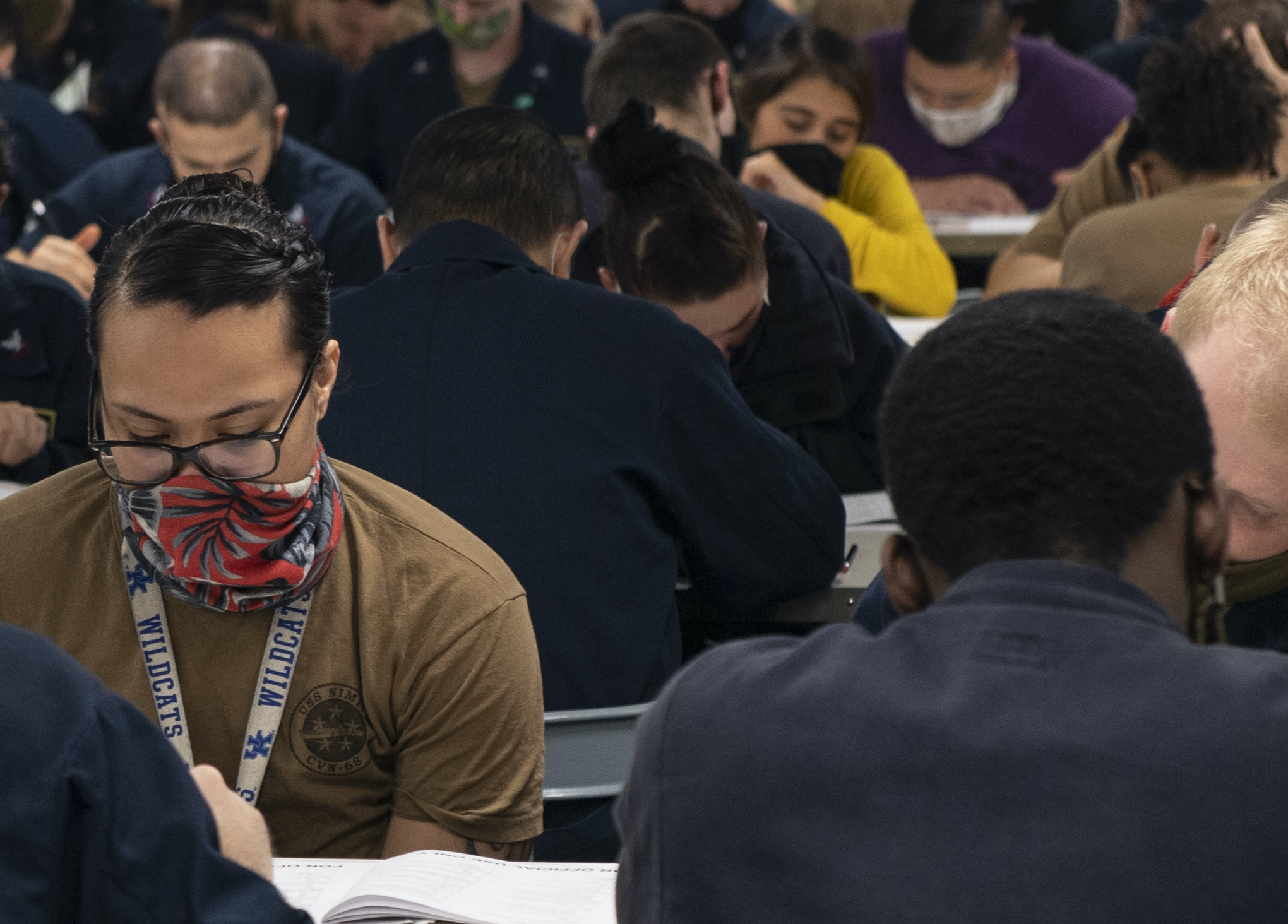 Gillingham said that deployments — and especially extended deployments — were always stressful, but COVID adds another layer of stress to the situation, and the Navy is trying to respond by adding more mental health services in different formats, including additional opportunities for more peer-to-peer types of interactions that focus on mental health and resiliency.

CNP Nowell said during the call that the Navy is also looking for other ways to do right by sailors and their families during this time – including working with the Pentagon and Congress to address a pay issue.

Sailors can get a family separation allowance once they deploy from their homeport and are gone for 30 days, he said.

“It’s not a lot, it’s $250 per month, but it’s still extra money in the pocketbook,” Nowell told reporters.

Still, by law, the 30-day clock didn’t start until the deployment started – even though sailors are having to leave weeks early to conduct their ROM and to conduct local training and certification activities.

“That was a real gripe for the sailors, so we worked with the secretary of the Navy, with [the Office of the Secretary of Defense], and with the Hill, and we’re very hopeful that a legislative proposal that we put in to allow us to start that 30-day clock beginning at the start of any pre-deployment ROM is going to be in the [National Defense Authorization Act] once that goes to conference and gets passed. So that’s just an example: we’re listening, we’re taking action,” Nowell said.
“We think that’s fair enough: they’re not with their families, it’s family separation allowance, so we’re hopeful that that will be in the NDAA.”