The first of three inputs to the Pentagon’s Future Naval Force Study was released this week, the Hudson Institute is calling for a future U.S. Navy fleet of 581 battle force ships through the addition of 80 corvettes, 99 unmanned surface vessels, 40 unmanned submarines and 27 new small amphibious ships

The Hudson Institute was asked to design a future fleet that adheres to today’s budget limitations but better meets the Navy and Marine Corps’ future needs: to operate more distributedly, to have better sensing and communication between all domains, to create better maneuver opportunities in complex environments, and to complicate an enemy trying to target or block U.S. naval forces.

This report, plus similar plans developed by the Navy and Marine Corps and by the Pentagon’s Cost Assessment and Program Evaluation (CAPE) office, will together inform a final decision on the Navy’s path forward by Deputy Secretary of Defense David Norquist, expected to be announced next week.

The Hudson plan – written by Bryan Clark, Timothy Walton and Seth Cropsey – calls for today’s 11-carrier fleet to be trimmed to nine aircraft carriers, by moving new construction to six-year centers instead of today’s four or five. It also trims the requirement for large surface combatants to 64 – down from the requirement of 104 laid out in the 2016 Force Structure Assessment – in a nod to the vulnerability and rigidness they represent by amassing so much firepower in a single location.

Aside from those largest platforms, the plan calls for increases in most other categories: it keeps the requirement for 52 small combatants like Littoral Combat Ships and frigates, the same as the 2016 FSA, and adds a requirement for 80 corvettes and 99 Medium Unmanned Surface Vessels to supplement them.

Under the sea, it keeps the requirement for 12 ballistic missile submarines and slightly reduces the requirement for attack submarines, from 66 in the 2016 FSA to 60 in this plan, but supplements them with 40 Extra Large Unmanned Undersea Vessels that are pier-launched and can conduct many missions similar to an SSN.

On the amphibious side of the portfolio, the Hudson team calls for just 30 traditional amphibs compared to the 2016 requirement for 38 – with eight amphibious assault ships to focus on supporting the F-35B Joint Strike Fighter and 22 amphibious transport docks and dock landing ships – but adds a requirement for 26 Light Amphibious Warships that the Marines have proposed as a way to maneuver small units of Marines around littoral battlespaces with less likelihood of detection.

“The Navy will need a new fleet design to affordably address its challenges and exploit its opportunities while maintaining today’s operational tempo. Unfortunately, its current plans fail to deliver on these goals. The force structure reflected in the [President’s Budget] 2020 Shipbuilding Plan and [Fiscal Year] 2021 budget, by continuing to emphasize large multimission combatant ships, includes too few ships to distribute the fleet or create sufficient complexity to slow or confuse an enemy’s attacks. Moreover, the fleet’s weighting toward large manned platforms creates unsustainable [operations and sustainment] costs that the Navy is even now struggling to pay,” the authors wrote in the executive summary.

The Navy’s contribution to the FNFS effort, its Integrated Naval Force Structure Assessment, was never released publicly because Defense Secretary Mark Esper had concerns about the content and the cost of the plan.

Bryan Clark, a senior fellow and director for the Center for Defense Concepts and Technology at Hudson, told USNI News that a noticeable difference between his plan and the Navy’s is the Large Unmanned Surface Vessel idea in the Navy versus the corvette idea in the Hudson plan. He said the Navy’s vision of LUSV was tailored around a specific idea of facing off against China in a high-end fight and wanting to distribute additional offensive and defensive missiles around the battlespace, potentially putting them so far forward that it would be dangerous to send a manned ship there. The Hudson plan instead has a lightly manned corvette that he said would be useful in presence missions and training with allies and partners during peacetime but that, if a conflict broke out, could be operated in an autonomous mode if the crew needed to leave the ship to serve as a forward unmanned missile ship. Clark said the cost of building corvettes instead of LUSVs was not much more and that in return the Navy gets “operational utility throughout peacetime.”

When the 2016 FSA was being drafted, the focus was making the Navy bigger. Despite sequestration earlier in the decade, Navy Secretary Ray Mabus had prioritized shipbuilding during his eight-year tenure and ensured that hot production lines stayed funded despite cuts elsewhere in the budget. After the initial shock of across-the-board sequester cuts in FY 2013, Congress had showed a willingness to provide some budgetary relief, and the Navy was looking forward to seeing continued increases in its budget.

Now, with the FNFS, the calculus is completely different. There’s a general consensus that flat budgets are the best the Pentagon can hope for, with declining toplines a real possibility into the mid 2020s. There’s also an increased focus on the cost of manning, operating and sustaining the fleet, which poses a danger to the Navy in the future. Increasing per-sailor costs, plus the need to bring in thousands more sailors to man the bigger fleet, could start to elbow other priorities out of the budget. Ship maintenance has similarly proven to be a weakness, with not enough capacity at private or public yards to meet the Navy’s needs and the service working hard to contain cost and schedule growth during ship availabilities.

There’s also less focus on a bigger fleet this time around, and more of a focus on a distributed fleet. Many experts inside and outside the Navy have concluded they’d rather have the same number of missile launchers from one large cruiser split among two or three smaller ships – allowing them to be more places from a lethality standpoint, allowing them to be smaller targets from a survivability standpoint, and creating a hedge in case one were sunk by an enemy from an attrition standpoint.

On the issue of cost constraints – both on the procurement side and the manpower and operations and sustainment (O&S) side – the Hudson report compares its projected costs to the 30-year plan developed to accompany the PB 2021 budget request. The FY 2021 30-year ship plan was never released publicly because Esper had more foundational concerns about it that the Navy could not immediately address, leading to the kickoff of the FNFS effort in February. 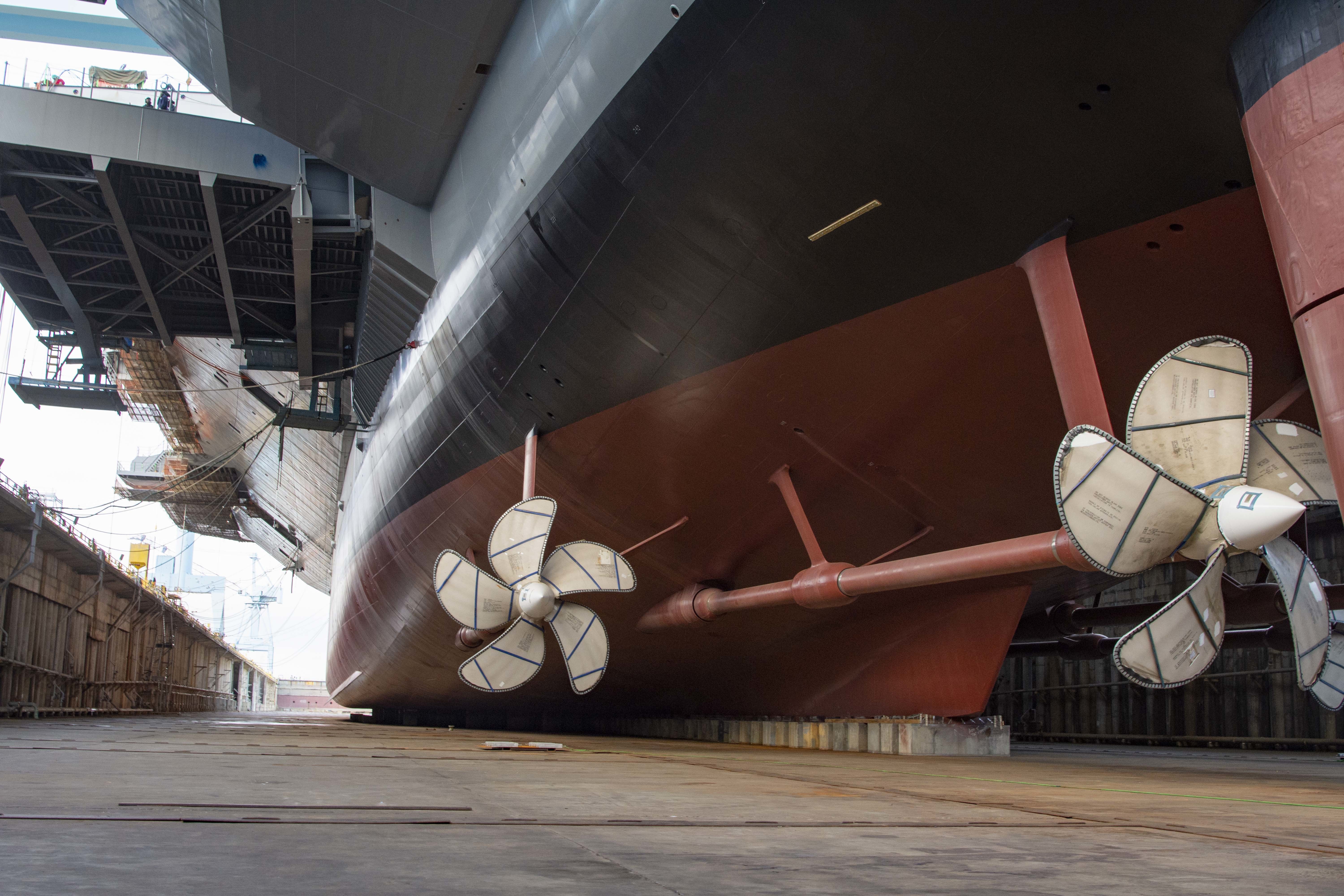 “The shipbuilding plan supports [a deployed posture] with a fleet that is larger, more operationally effective, and significantly less expensive to procure and sustain than the Navy’s planned force. The proposed plan balances the need for a new fleet architecture with the imperative to manage costs and takes an evolutionary approach to developing and fielding new platforms and associated technologies. Over thirty years, the shipbuilding plan costs $31.7 billion less to buy in FY 2020 dollars than the PB21 [shipbuilding] budget plus inflation. It includes an affordable mix of platforms, such as a $2.3 billion DDG(X) that has the same [vertical launch system] capacity as a current DDG, rather than the Navy’s planned cruiser-like $3.3 billion future large surface combatant. The plan also includes a $4 billion SSN(X) that is designed for stealth, survivability, and speed rather than a large, undersea mothership with significant missile and UUV capacity that could cost more than $5.5 billion. By keeping total shipbuilding costs lower than the PB21-plus-inflation limit throughout the plan, the Navy can preserve funding for research, development, testing, and evaluation of future technologies and procurement of key enablers, without having [shipbuilding] costs crowd out necessary investments in these areas,” the authors wrote.

“The proposed fleet architecture costs, on average, approximately $1.3 billion more per year —4.9 percent—than the PB21-plus inflation O&S limit. By slightly reducing the number of CVNs in the fleet, fielding fewer large surface combatants with fewer personnel, and not extending ships past their original service lives, it would be possible to lower O&S costs for existing ship classes. However, introducing small surface combatants, unmanned vessels, and auxiliaries to create a fleet with more than twice the number of ships as today’s force leads to a net increase in O&S costs. … Over the next thirty years, Hudson’s proposed fleet would cost a total of $8.6 billion more to procure, operate, and sustain than the sum of the SCN and O&S PB21-plus-inflation limits. The Hudson fleet would cost $165 billion less to procure, operate, and sustain than the fleet proposed by the Navy in its FY 2020 thirty-year shipbuilding plan, as shown in figure 19. This is true even though the Hudson plan has nearly twice as many vessels. The Navy plan would require $174 billion more than the established limit. In terms of personnel, even when the proposed plan robustly crews each vessel, it would require 27 percent fewer personnel to crew the fleet by FY 2045 than the Navy’s FY 2020 thirty-year shipbuilding plan, as shown in figure 20. This is mostly a result of shifting to smaller designs and adopting greater automation.”

The Hudson team notes in their executive summary: “The US fleet is at an important crossroads. Nearly twenty years after the drive for transformation led to costly and problematic programs such as the littoral combat ship (LCS), Gerald R. Ford-class aircraft carrier, and Zumwalt-class destroyer, the Navy is again starting work on new ships in every vessel category. It is essential to make smart decisions on the design of these ships, and of the fleet as a whole, to create a force that affordably supports future defense strategy and avoids mistakes of the past.”

The report notes sufficient time between ship design and ship construction for new classes, stating that “the proposed fleet, like that which the Navy is considering, incorporates several new ship classes. The proposed shipbuilding plan mitigates the risk associated with new platforms by using derivative vessel designs where appropriate and providing, on average, more than seven years between initial ship concept and construction. This allows technologies to mature and provides sufficient time for detailed design work. During this time, the Navy should implement a technology development roadmap for each new ship to enable the development of essential hull, mechanical, and electrical systems or the evolution of the vessel’s concept to accommodate expected technological limitations.”