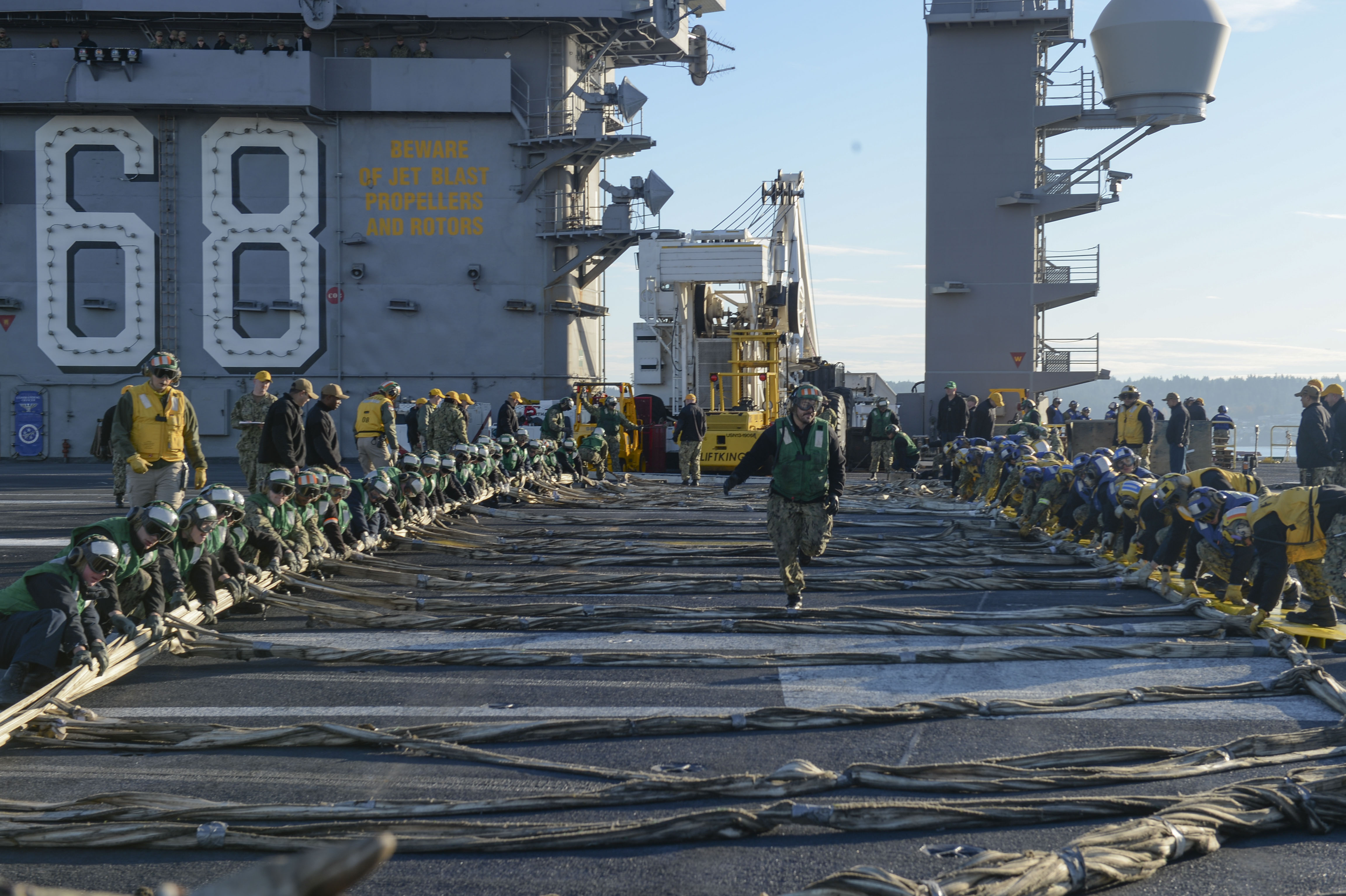 The Navy is considering an extension of the service lives of the first few aircraft carriers in the Nimitz-class, the head of the service’s carrier program said on Thursday.

The Navy is assessing whether to delay decommissioning timelines for the first few ships in the Nimitz-class, Program Executive Officer for Carriers Rear Adm. James Downey said at a symposium hosted by the American Society for Naval Engineers.

Specifically, the Navy is evaluating the timeline for USS Nimitz (CVN-68), with an eye toward coming to a conclusion about the first-in-class ship within the next one to two years, he said.

“You have 40 more years of Nimitz life, but Nimitz herself is coming up to potentially an end-of-life-cycle at the end of this [future years defense program]. But she has capability beyond that point,” Downey said. “So we’re looking at where that capability sits from a timeframe perspective. It’s — generally the math takes you to the 52 or 55 years, so we have that issue that we’re going through.”

Downey said the Navy is analyzing its upcoming refueling and complex overhauls (RCOH) and docking availabilities as it assesses whether or not to delay Nimitz’s decommissioning.

According to the Navy’s latest budget submission, USS Harry S. Truman (CVN-75), which the service last year attempted to retire at its mid-life point but ultimately rescinded the proposal due to an outcry from lawmakers, is scheduled for the next refueling and complex overhaul in 2025.

“We have the issue that there’s certain places where we do this work and there’s certain docks available to do it in. We’re going through our scheduled RCOHs and dockings and we’re looking to deconflict that at the beginning of the next FYDP as well,” Downey said. “So we have significant discussions going on on [CVN]-68 herself and we’ll see what we work out through the Navy and Department of Defense here in the coming year or two. We would potentially see some adjustments there.”

While the Navy has yet to present its legally-mandated 30-year shipbuilding outlook for FY 2021 to Congress, the FY 2020 blueprint showed the carrier inventory dropping from 11 carriers in 2024 to 10 in 2025, around the time Nimitz is slated to retire.

Still, Downey said the Navy needs to analyze a host of factors ranging from maintenance availabilities to how an extension could affect other ships in the fleet, as it weighs delaying the decommissioning date.

“These ships don’t go by themselves, so that also affects another 30-plus ships on each side of that – the ships with her, the ships with the next [carrier] strike group,” he said. “So some pretty significant considerations there. And then it also affects how many – when we pull the sailors off and how we affect that manning profile for the whole ship and certainly the nuclear plant.”

The Nimitz-class carriers are currently projected to have a 50 to 55-year service life despite the design intending the carriers to be in service for 30 years, Downey said.

“That is not at a diminished rate whatsoever. And for those of you directly involved in modernization, we’ve got significant network efforts going on — self-defense systems going on, missile systems going on — it’s interesting to look at the increased modernization including [Joint Strike Fighter] and others and see that that design has succeeded without significant hull, mechanical, electrical modifications over those 50 years, other than the overhaul,” he said.