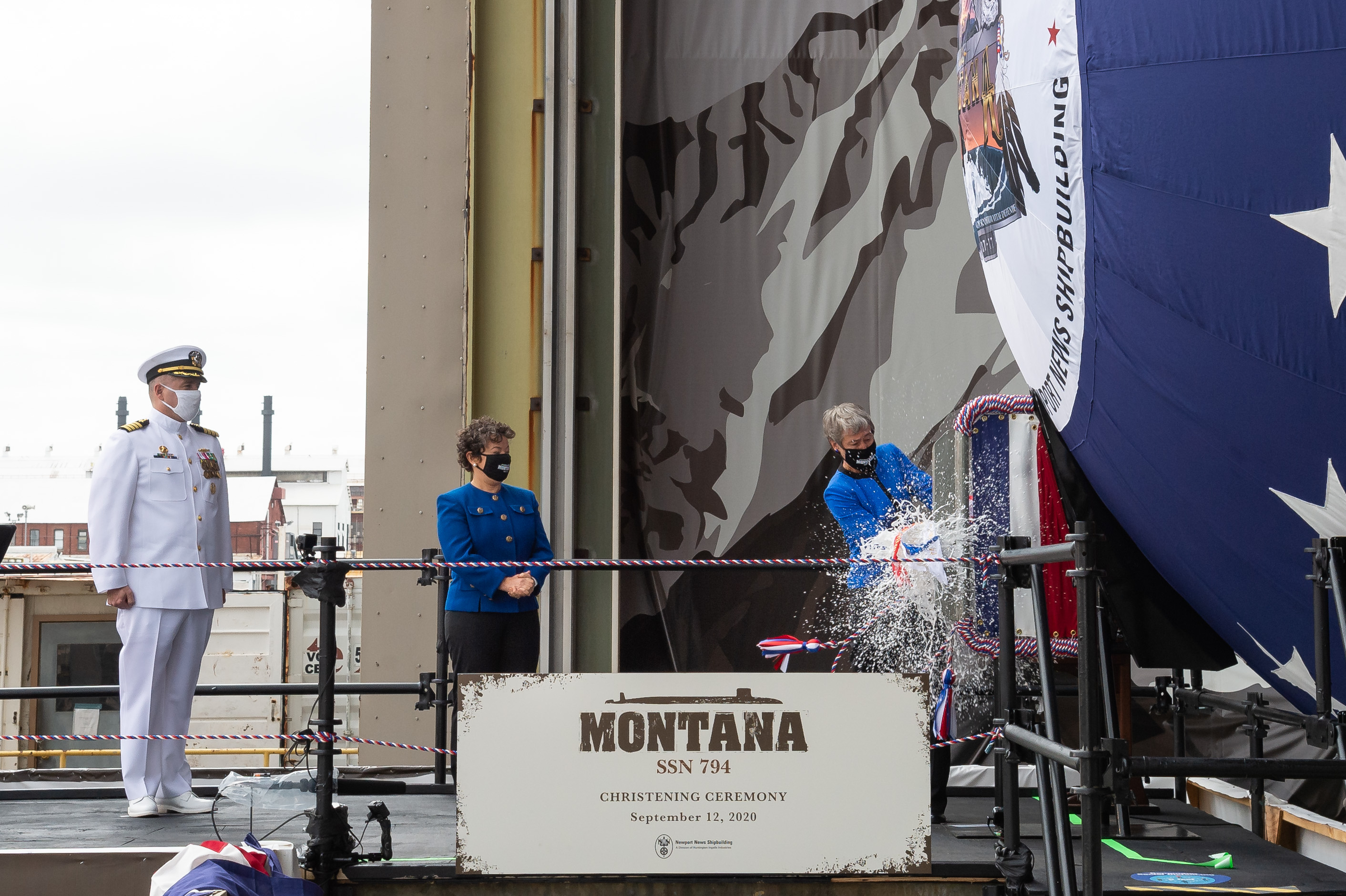 Despite the coronavirus pandemic taking its toll on submarine construction at Newport News Shipbuilding, as the company president announced last month, the shipyard and the crew of the future Montana (SSN-794) have been working hard to keep the Virginia-class attack sub on track to deliver to the fleet next year.

The Navy christened Montana over the weekend in the first-ever all-virtual christening ceremony at Newport News Shipbuilding, where ship sponsor and former Interior Secretary Sally Jewell was among the only people by the boat when she bashed a bottle of sparkling wine against the hull to christen it.

Montana began construction in April 2015 and is expected to deliver to the Navy late next year. After its christening over the weekend, the boat will be moved into the water in the coming weeks for final construction activities and to eventually conduct testing and trials. Due to delays in SSN construction, this float-off is taking place a few months later than originally planned – though a company official told USNI News they are confident they can keep to the late 2021 planned delivery.

Last month, Mike Petters, the CEO of parent company Huntington Ingalls Industries, told investors that the Virginia-class submarine construction line was bearing a disproportionate amount of the impact of COVID-19-related delays and disruptions at the Virginia shipyard, due to how the Navy asked the yard to prioritize resources.

“What happens is, when you’re at less than full attendance, you start moving people from one area to another, and you start trying to make sure that you are focused on getting the right skills onto the right place. And so I think that’s unique to Newport News, I think that dealing with commissioned ships and deployable assets is a unique challenge for them in this environment,” he said, referencing the fact that Newport News Shipbuilding is also conducting repairs and mid-life overhauls on aircraft carriers and submarines in addition to building new ones.
“At the beginning of this process, working with the Navy to try to make sure we prioritized deployable ships, and then unit deliveries, that starts to move around the priorities in the business a little bit,” he said about how resources were being applied to keep some programs on schedule and choose where delays are more acceptable.

During a pre-christening media day, Vice President of Virginia-Class Submarine Construction Jason Ward told USNI News that the next SSN behind Montana, the future New Jersey, is where the yard is seeing the effects of COVID and reprioritizing people and materials that may be in short supply due to the pandemic.

“Montana is being prepared to move towards the next milestone of construction, which is launch. So after the (christening) ceremony, we will continue to wrap up the addition of external hull treatment and we’ll transfer her out of this facility and to the water to start the waterboard test program and ultimately work towards delivering Montana to the Navy next year,” Ward told USNI News during the media event.
“Right behind that, Newport News is working on New Jersey, where the next major milestone is focused on pressure hull complete. And that’s where we’re focused on making sure we are working within the confines of our new environment with COVID. I’m really pleased to report that the number of shipbuilders that have supported this construction production line has continued to understand their essential working criteria and have adapted very strongly to the new protocols that we’ve put in place to socially distance and to keep our shipbuilders safe, which is really the first and primary objective when the pandemic came upon us in March.”

Ward acknowledged what Petters did before him – that the yard and its partner, General Dynamics Electric Boat, had been seeing the SSN deliveries slip as construction ramped up at the yards, and that COVID exacerbated the strain that suppliers and shipbuilders were feeling.

“As Newport News started transitioning from a one-per-year pace to a two-per-year pace, we did see stress on some of the supply base and infrastructure here, and most recently the pandemic had added additional stress to the available workforce to support Montana,” Ward told USNI News.
“We’ve partnered with the Navy and with our shipbuilding partner General Dynamics Electric Boat to ensure that we are delivering the highest-quality submarines to the Navy.”

During the media event, marine painter Sheniqua Johnson said all employees were required to wear masks and social distance when they could, and that the shipyard had been generous in providing hand sanitizer, cleaning wipes and disinfectant sprays so that everyone could keep their workplaces germ-free.

Richard Mattheisen, a pipefitter foreman, said during the event that COVID “slowed us down, just like it slowed everybody else down; just like always, we found a way to come through it here.”

“Submarines are tight quarters, so it’s so hard to social distance here. So we started doing things like on top of the masks we also wear a plastic shield over our face, almost like we use double eye protection when we grind. So we started doing that, and hanging curtains between people working together, just because it’s such tight quarters on submarines,” he said, noting that there were slowdowns in the beginning of the pandemic but that his team has picked up the pace once they found the right workarounds to get the job done while keeping everyone safe and healthy. 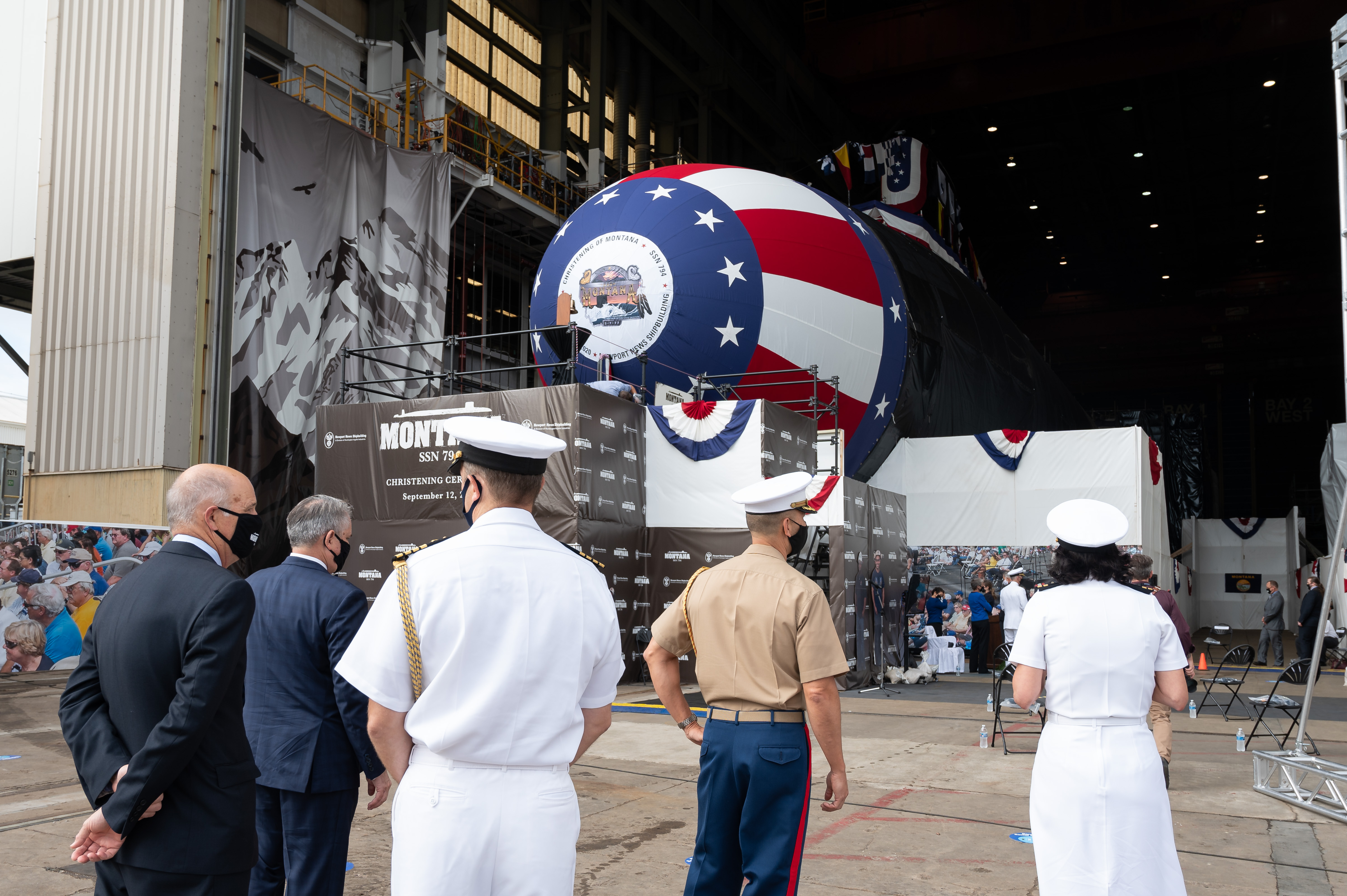 The Montana crew also participated in the media day, with Lt. Stjohn Richardson telling USNI News that the crew has been particularly focused on taking on greater responsibility for the boat once it gets in the water. Richardson, who serves as the damage control assistant and operational safety officer, among other collateral duties, said once the boat is in the water, the Navy crew will be the primary damage control team, rather than having to evacuate and allow the shipyard to put out any fires or handle any other emergencies – so he said recent training events have focused on damage control. The team is also preparing to get the engine room and reactor fully certified and ready to conduct sea trials next year.

Commanding Officer Capt. Michael Delaney said his crew of 135 is hard at work training in simulators, on other fleet submarines and more in preparation to take delivery of the boat in late 2021.

He told USNI News that “for a short period of time” they had to slow training due to COVID, but “then as we kind of figured out ways to execute the training and modify it slightly – in some cases we would have to use smaller groups – but we were able to figure our way around and have minimal effect on our ability to conduct training.”

“While different, my training regimen is much like it was pre-COVID,” he added.

Asked what it was like to be caught between the fleet, which always wants more submarines as fast as it can get them, and the shipyard, which is balancing delays at the yard due to suppliers running behind and employees being out on leave due to the pandemic, Delaney said, “I would be lying to say that we’re full-throttle here amidst COVID. I have actually been very impressed [with] how the shipyard and ship’s force and the Navy in general has dealt with the COVID pandemic here. We’ve had to take lots of measures to mitigate that, between temperature checks, we’ve divided our training times so that we’re in smaller groups throughout the day. So while there have been some challenges that we’ve had to work around, the resiliency of our sailors and our shipyard workers have pretty much weathered the storm and been able to continue to make progress and successfully as close as we can drive towards the schedule of getting this ship ready for sea.”