It’s no secret that the Navy’s four public shipyards have prioritized attack submarines last, instead of focusing the yards’ limited resources on aircraft carrier maintenance and ballistic missile submarine refuelings. But even though the SSBN refuelings are drawing to an end, which should free up resources for SSN maintenance, a Government Accountability Office report released today states the time SSNs will sit idle waiting for maintenance work to begin will actually continue to increase for the next two years.

“We found that idle time increased each year from 100 days in fiscal year 2015 to 1,019 days in fiscal year 2019—a 919 percent increase,” reads the GAO report, Navy Shipyards: Actions Needed to Address the Main Factors Causing Maintenance Delays for Aircraft Carriers and Submarines.
“According to Navy officials, they expect the number of days of idle time to continue to increase for the next 2 fiscal years,” it adds, noting that the increase has been in both the number of subs sitting idly and the duration that each sub is waiting for its turn in the repair yard.

The discussion of idle time was just one of several issues the report addressed in discussing the four public yards and their challenges that ultimately hurt the operational submarine and aircraft carrier fleets.

Two primary factors for the delays were unplanned work arising during the maintenance availability, and workforce challenges such as not having enough people or having too many inexperienced workers. Though neither would come as a surprise to those following public yard maintenance – GAO notes that it has written more than 20 reports since 2015 on the topic – this report still sheds new light on the topic through interviews with Navy officials and survey results from the shipyards themselves. 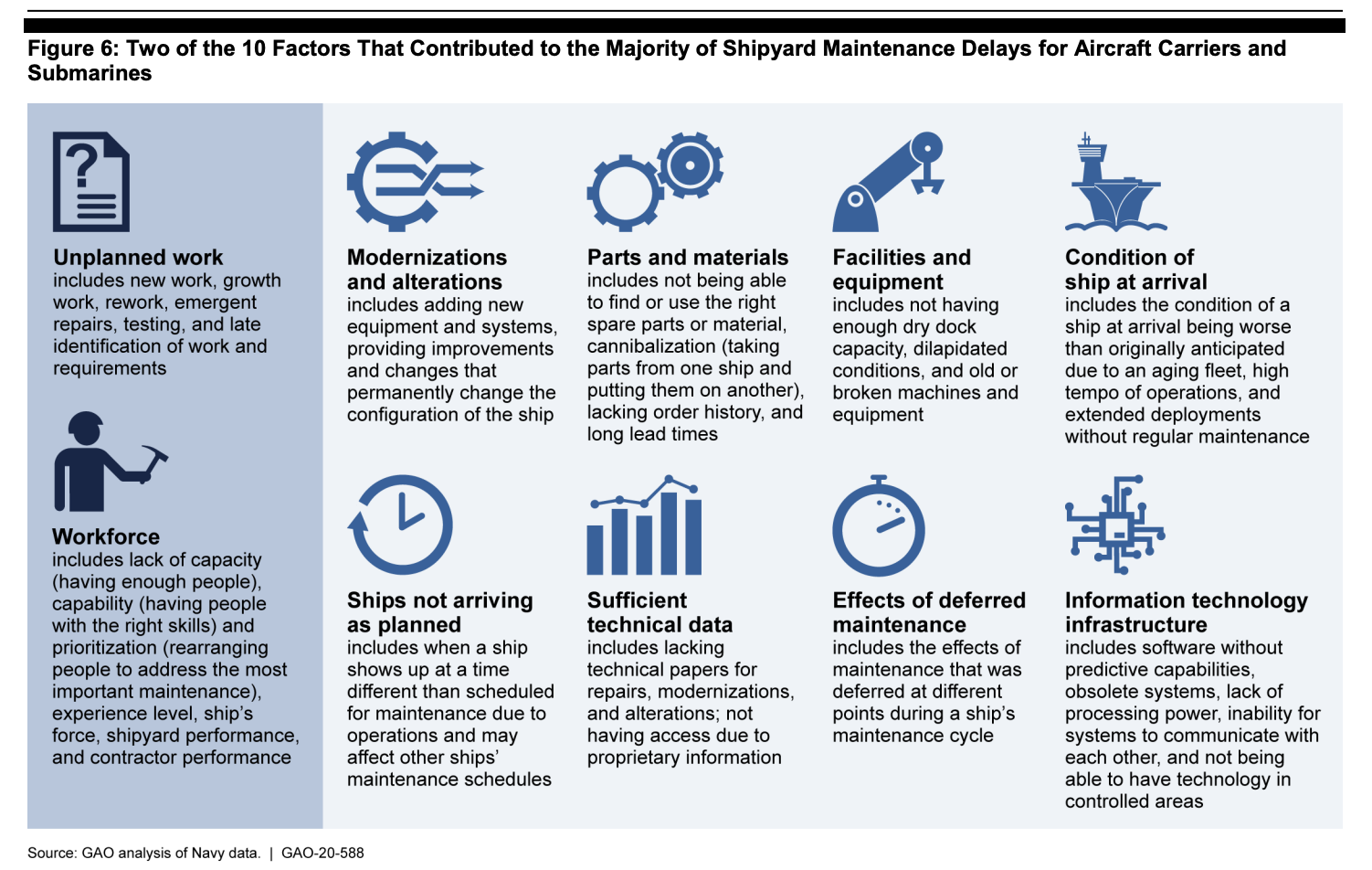 According to the report, many shops across all four yards rely heavily on overtime to accomplish planned work alone; when unplanned work comes up – either due to the scope of work expanding as maintainers get into spaces and see the extent of damage, or as the Navy adds items to the to-do list mid-availability – some shops are counting on employees working nearly 60-hour workweeks.

So much overtime actually leads to a decline in worker productivity and leads to more mistakes being made, the report notes.

The yards are so reliant on overtime in part because of a mismatch between how many hours of work they forecast they’ll have versus how many hours it takes to actually do the work. Manpower levels at the yards are decided based on projected workloads, and when there ends up being more work than expected, both due to the incorrect projects and due to unplanned work arising, the workers at the yards have to put in extra hours to get the job done.

GAO notes that efforts are ongoing to better plan future submarine and carrier maintenance activities, but the organization criticizes the Navy for not being able to measure the outcomes of this work.

“While NAVSEA has begun its Shipyard Performance to Plan initiative to help address both the unplanned work and workforce factors, the initiative does not include key elements of a results-oriented management approach such as fully-developed quantitative metrics, goals, and milestones,” the report reads. 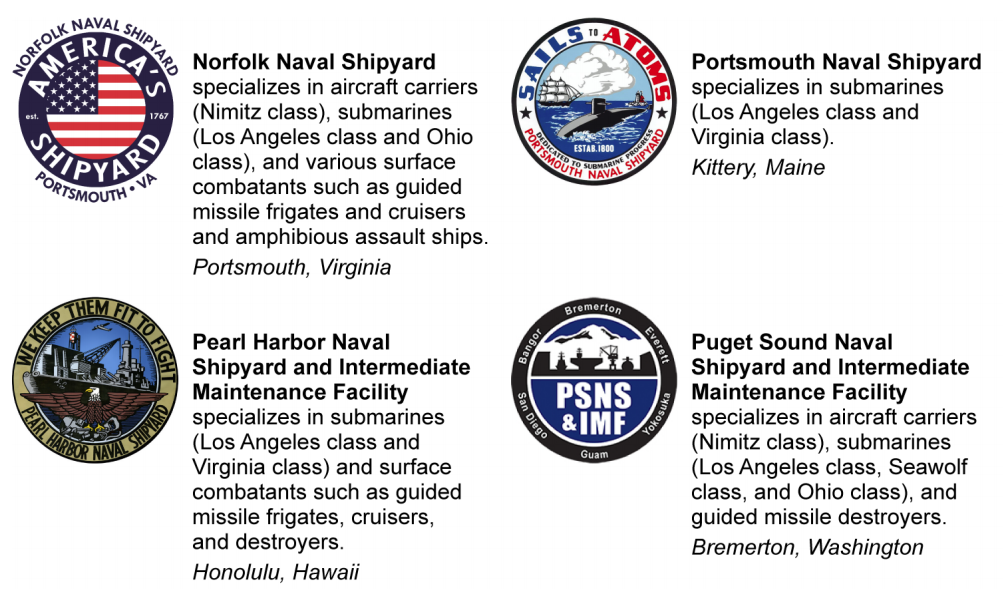 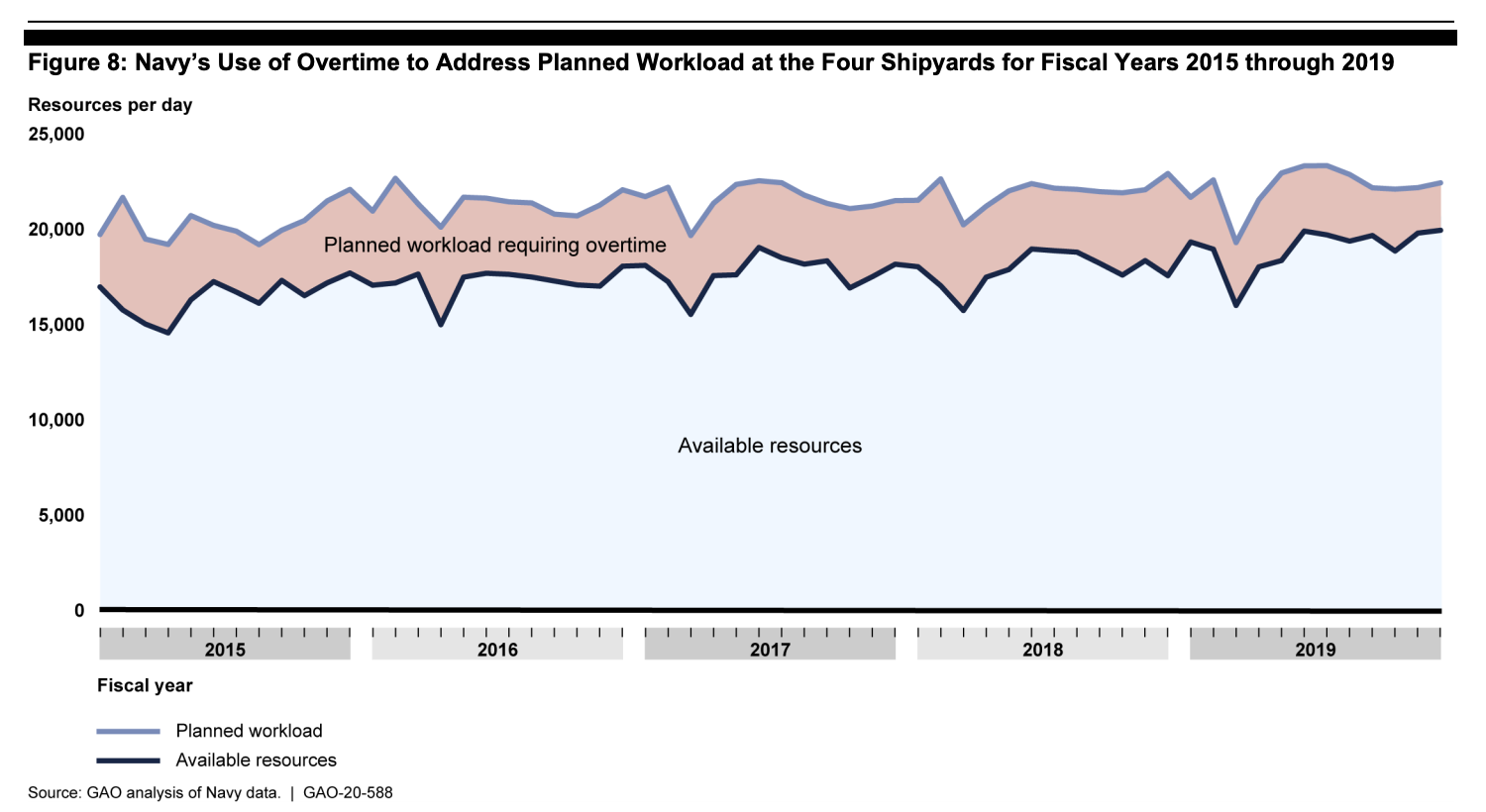 During fiscal years 2015 through 2019, the Navy’s four shipyards increased their workforce from 33,501 to 37,368 people by hiring engineers, naval architects, supervisors, and apprentices, among other occupations. In December 2018, we reported that it is challenging to recruit, train, and retain personnel for skilled occupations such as engineers and technicians, contracting specialists, and apprentices for the production trades (i.e., welders, machinists, etc.). Although the overall shipyard workforce has grown by 3,867 people, officials from all four shipyards told us the shipyards are working beyond their capacity and do not have enough fully trained production personnel to perform work in a timely manner. …

We also found that the amount of workload planned for the shipyards for fiscal years 2015 through 2019 consistently exceeded shipyards’ capacity in terms of the workforce available to perform the work without using overtime. Specifically, we found that planned work was 23 percent more than might be expected to be completed without the use of overtime. According to the Navy, completing the daily workload without the use of overtime would require 4,160 more shipyard personnel per day. For fiscal years 2015 through 2019, NAVSEA guidance acknowledged a mismatch between the shipyards’ workforce capacity and their planned workload, and required shipyards to use overtime to bridge the gap. … 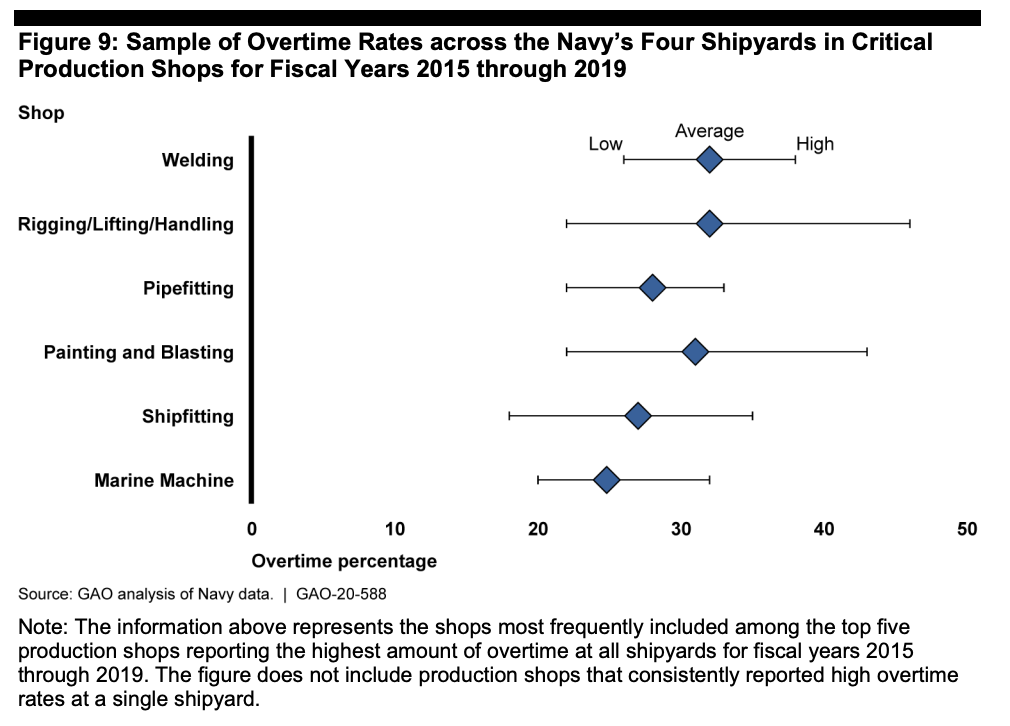 The Navy has consistently relied on high levels of overtime to carry out planned work. GAO’s analysis found that high overtime among certain production shops, such as painting or welding, averaged from 25 to 32 percent for fiscal years 2015 through 2019, with peak overtime as high as 45 percent. Furthermore, shipyard officials told us that production shops at all four shipyards are working beyond their capacity. Overtime at such rates has been noted as resulting in diminished productivity. …

The consistent use of high levels of overtime to meet planned workloads at the Navy’s four shipyards has not alleviated the persistent and ongoing maintenance delays and may, instead, be contributing to these delays. We have reported that working overtime can make staff less efficient. Shipyard officials stated that too much overtime can also increase the likelihood of accidents and rework, among other things. We found that the concentration of inefficient work in production shops correlates with production shops that have consistently experienced high rates of overtime use such as at the machine, shipfitting, and painting and blasting shops. For example, the shipfitting shop at Puget Sound—which experienced overtime of 25 percent in fiscal year 2019—was cited by the Navy as a source of inefficiencies that could be resolved by providing additional staff. In addition, marine machine shops—which averaged 25 percent overtime for fiscal years 2015 through 2019—were cited as among the top shops degrading performance across all four shipyards due to systematic planning problems and poor execution. …

Officials from NAVSEA and the shipyards confirmed that unplanned work continues to cause maintenance delays and contributes to the Navy’s inability to present accurate estimates for shipyard maintenance in Navy budgets. Further, NAVSEA officials stated that accurately planning workload requirements and the cost for maintenance periods to support Navy budgets is difficult because the Navy relies on estimates that are developed as much as 2 1/2 years prior to the actual beginning of work on the maintenance period. The Navy has reported in its annual risk and internal control assessments its inability to accurately plan for shipyard maintenance. Beginning in 2016, the Navy reported a trend in underestimating the overall cost of ship maintenance in annual risk and internal control assessments. The assessments stated that the Navy’s policies for defining work requirements, developing cost estimates, and executing shipyard maintenance resulted in inaccurate cost and duration estimates. Specifically, an August 2016 Navy report stated that material weaknesses in planning for ship maintenance led to the Navy spending more than the enacted ship maintenance budgeted amounts for 7 consecutive years by a total of $5.7 billion. According to the Navy, shortfalls in the Navy’s shipyards accounted for approximately 50 percent of the $5.7 billion, which led to transfers from other DOD accounts and requests for supplemental appropriations from Congress to support continued shipyard operations. The Navy’s 2019 risk and internal control assessment indicates that these issues have persisted, stating that shipyards have had longer depot maintenance durations than expected, increased overhead costs, and reduced operational availability of Navy ships. 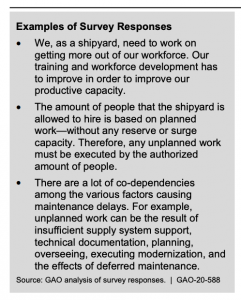 For example, within the workforce factor: 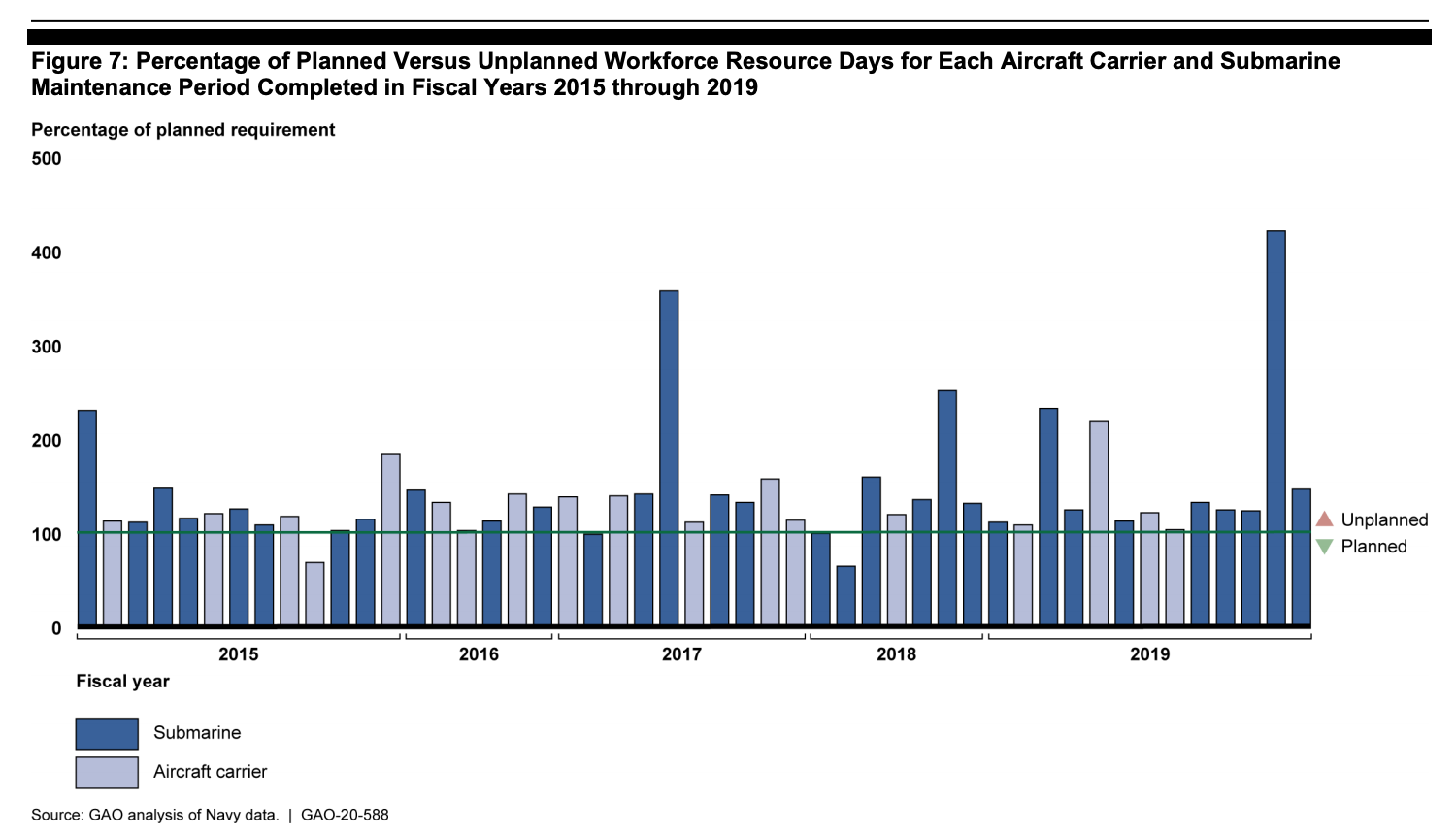 According to shipyard and fleet officials, aircraft carriers and submarines undergoing maintenance had longer planned durations than similar previous maintenance periods. For example, shipyard officials stated that they recently updated workload requirements estimates to extend the duration of a certain type of planned maintenance for submarines from 27 months to 31.2 months. In addition, NAVSEA officials stated that they revised planning factors for ship maintenance to improve estimated workload requirements and cost factors. NAVSEA officials stated they plan to analyze the results from the revised planning factors annually to monitor whether the changes improve estimates and to make adjustments as needed. According to NAVSEA officials, they will not know whether the changes they are making result in improved estimates until work on ship maintenance periods using the revised planning documents and planning factors is complete—a process that may take several years.