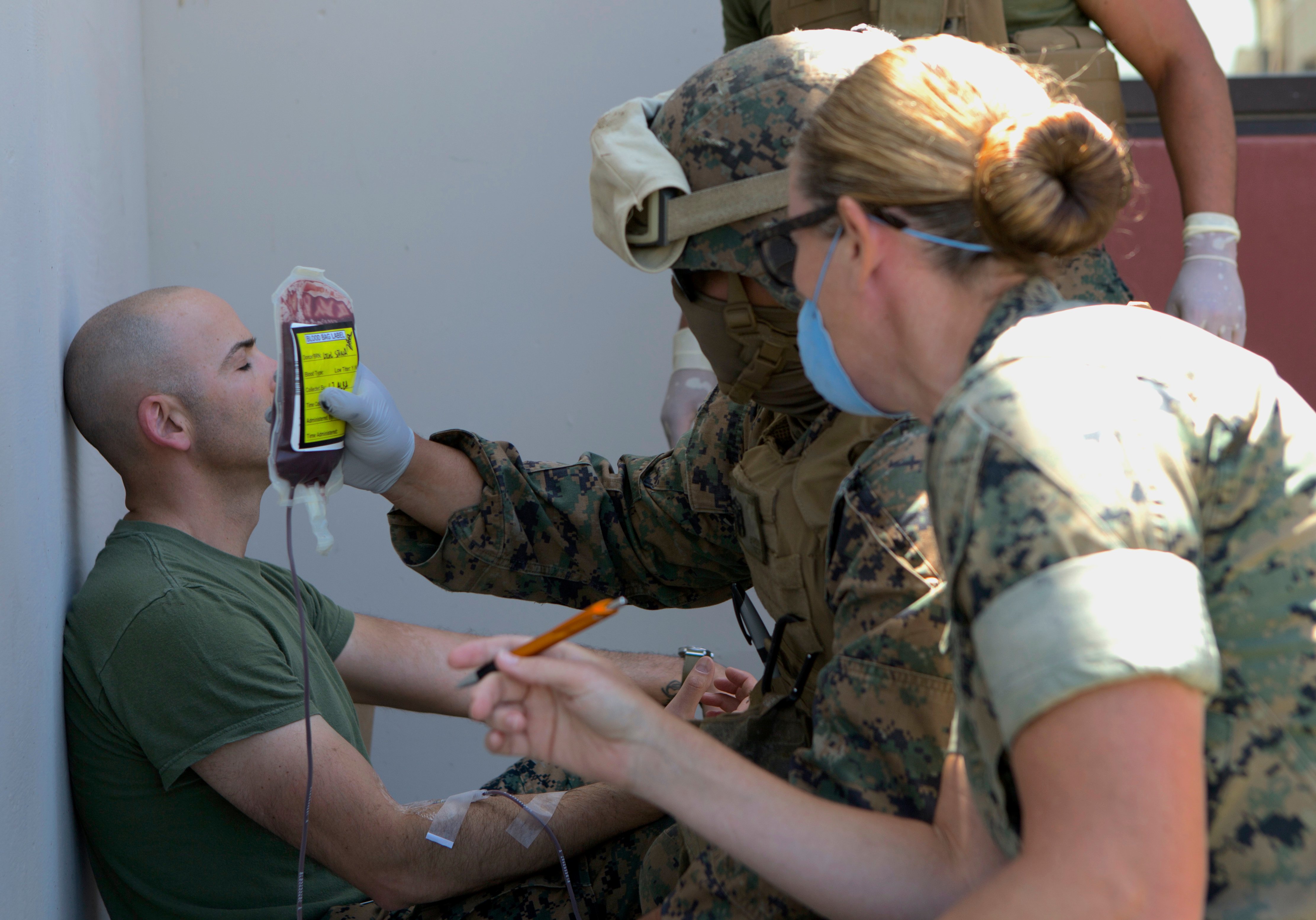 Front-line expeditionary forces are getting a new capability that officials say will save lives by enabling small units to have an emergency, on-demand, fresh blood supply to treat battlefield casualties.

The new capability – the Emergency Fresh Whole Blood program, or “Valkyrie,” as it’s known by Marines and sailors with the task force – is being used for the first time this year by conventional forces in the Middle East, according to the Marine Corps. Army units began using a similar program for the first time in Afghanistan earlier this year.

The idea behind Valkyrie “is to provide whole blood as a resuscitation fluid” and boost the chances of survival for casualties that are hemorrhaging, Lt. Lauren Murray, battalion surgeon with 2nd Battalion, 5th Marines and a doctor of osteopathic medicine, told USNI News by phone from Kuwait. “It’s been used in the special operations community before, but this is the first time that we brought it out here as part of the conventional forces.”

“It’s a great tool to have in the toolbox, especially given the mission of the Special Purpose [Marine Air-Ground Task Force]-Crisis Response-Central Command, where they can deploy anywhere, anytime, and sometimes not knowing what their evacuation times is going to be,” Murray said. Her battalion, 2/5, is the ground combat element for the current SPMAGTF-CR-CC 20.2 rotation.

The lightweight kit puts life-delivering blood transfusion capability in the hands of “Platoon Docs” and trained Marines with small units that suffer casualties but aren’t near higher-echelon trauma care equipped with larger blood and plasma supplies. So a rifle squad caught in a remote mountain ambush, a refueling team on an island airstrip or an expeditionary fires crew in a remote desert – much in line with the Marine Corps’ vision of future missions in an Expeditionary Air Base Operations environment – can collect and transfuse blood to a wounded Marine or sailor quickly, helping stabilize the casualty before a truck or helicopter arrives to evacuate to a battalion aid station or surgical team.

Hospital Corpsman 3rd Class (FMF) James Madigan, lead instructor and program coordinator with Special Purpose MAGTF-Crisis Response-Central Command, said Valkyrie “is such an incredible life-saving tool. It’s beneficial to everyone, especially CENTCOM and the Special-Purpose MAGTF, that we have this capability to deploy wherever we have to provide life-saving care to the best of our abilities.”

Until now, frontline medical teams had to bring their own blood supplies into the combat theater or rely on donations from troops at walk-in blood banks to supplement those supplies.

Now, Navy corpsmen equipped with the kit “can call somebody on the pre-screened donor pool, and they will draw a unit off that person,” Murray said. “Then they will transfuse it to the other person. So it’s done right then and there. They can store the blood for up to four hours safely.”

The blood draw and transfusion directly from the donor to the patient can be done “at the point of injury, so where the injury actually occurs,” she added, noting that can save valuable time before the patient is evacuated to higher-level care.

As a precaution before a mission kicks off that might lead to casualties, units “could pull off a unit of blood from one of their prescreened donors and have that readily available,” added Lt. Cmdr. Sean Nardi, an emergency medicine surgeon and force surgeon for SPMAGTF-CR-CC.

Providing blood quickly and easily to wounded troops can be lifesaving.

Many combat casualties suffer from hemorrhaging, or massive blood loss, which can be fatal if they aren’t transported to advanced trauma care in time. About 887 troops who died in the wars in Afghanistan and in Iraq over the 10-year-period from 2001 to 2011 – many wounded by improvised explosive devices that often damaged or destroyed vital organs and limbs and led to massive arterial bleeding – might have been saved if front-line first responders had transfusable blood available to treat them more immediately, before they arrived at an expeditionary surgical suite, according to I Marine Expeditionary Force.

Among options for resuscitative fluids, “whole blood is the best product we can give to save lives on the battlefield, and it is very easy,” Madigan said. “It’s a great program now that we are reimplementing it back into our expeditionary forces.” 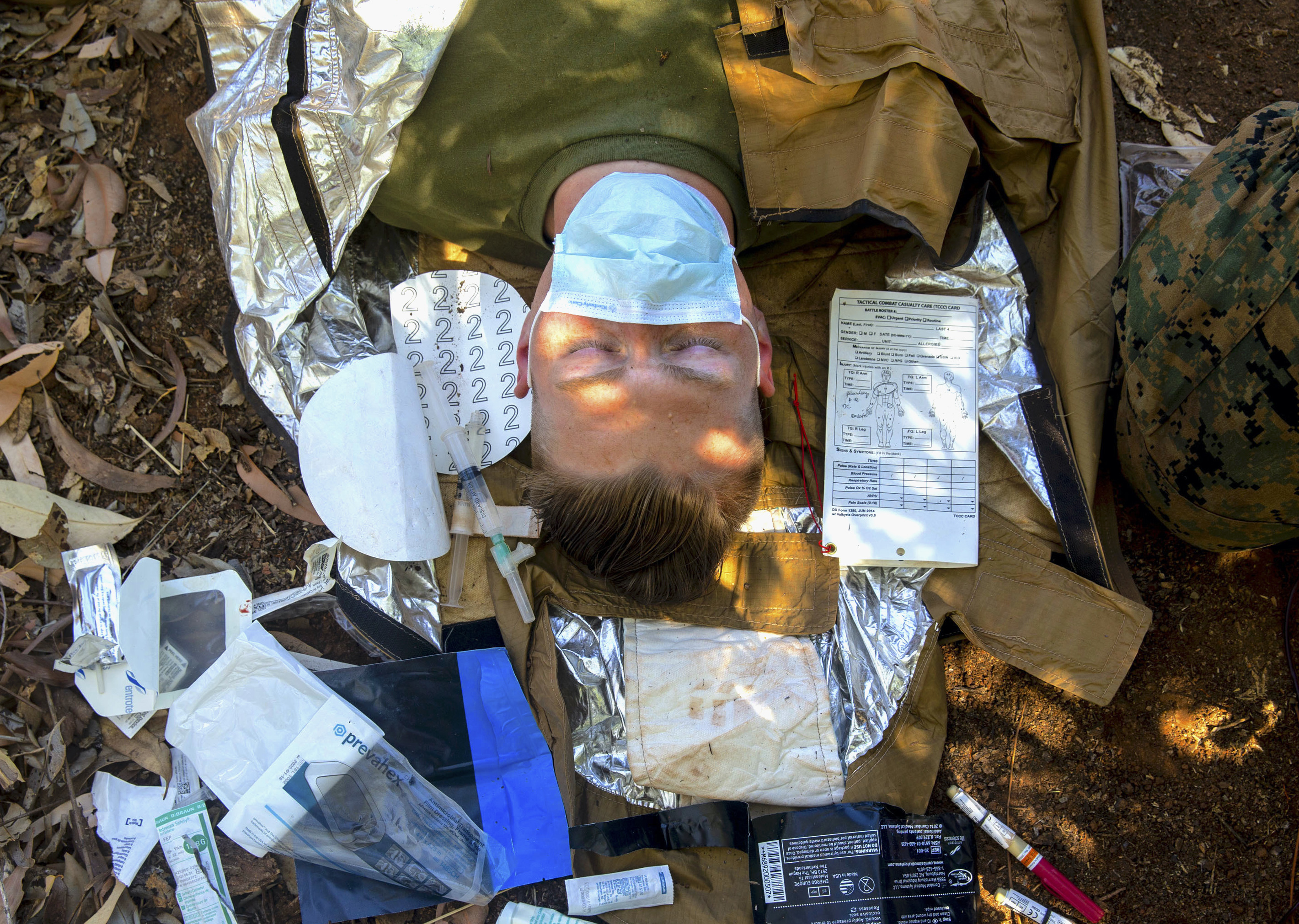 The SPMAGTF’s pool of donors first formed after a blood drive at Camp Pendleton, Calif., before the infantry battalion deployed. “It was voluntary; the Marines and sailors had to consent to partake in it,” Murray said. Blood was draw, tested for any transmissible diseases, and validated by type, with O-positive or O-negative donors joining the pool. “Once we got the type back, we were able to have a sufficient donor pool,” in place before they deployed overseas, she added.

About 30 percent of the population have type-O blood and are considered universal donors. So SPMAGTF-CR-CC had a pool of about 750 potential donors among the 2,500-member force. “The response has still continued to be great,” Murray said, noting that many Marines have sat through classes and lectures. “So it’s increased their interest even more.”

Unit corpsmen manage and maintain their pool of donors, Madigan said. Each donor carries a card identifying themselves as a donor and with blood type.

Needles aside, the simplicity of the program – and seemingly ease of use and relevance – has been embraced by Marines and sailors. “We can’t believe it’s something that hasn’t been standard operating procedures for years,” said Capt. Joshua Hays, a SPMAGTF-CR-CC spokesman, “so this is an incredible program that they’re working on.”

The idea for the “walking blood bank” came several years ago from Lt. Cmdr. Russell Wier, a physician assigned to 1st Marine Division.

Corpsman and Marines interested in the program go through a weeklong program, Madigan said. They get about 12 hours of classroom instruction and intravenous practice, and the rest of the week is spent practicing by actually taking blood from donors. “Then we’ll put the same blood right back into the same donor,” he said. “So we can practice everything, the entire process, safely and easy.”

Each kit costs about $135 and has two parts: One kit to obtain the blood from the donor, and one kit to transfuse the blood into the casualty. It includes a blood collection bag, label, IV access, alcohol wipes, needles, tubing, gloves and ways to measure the blood bag is full, Madigan said. “It weighs roughly about two pounds, and it’s pretty slim – about the size of a laptop, and it’s flat. So you can store it pretty much anywhere.” 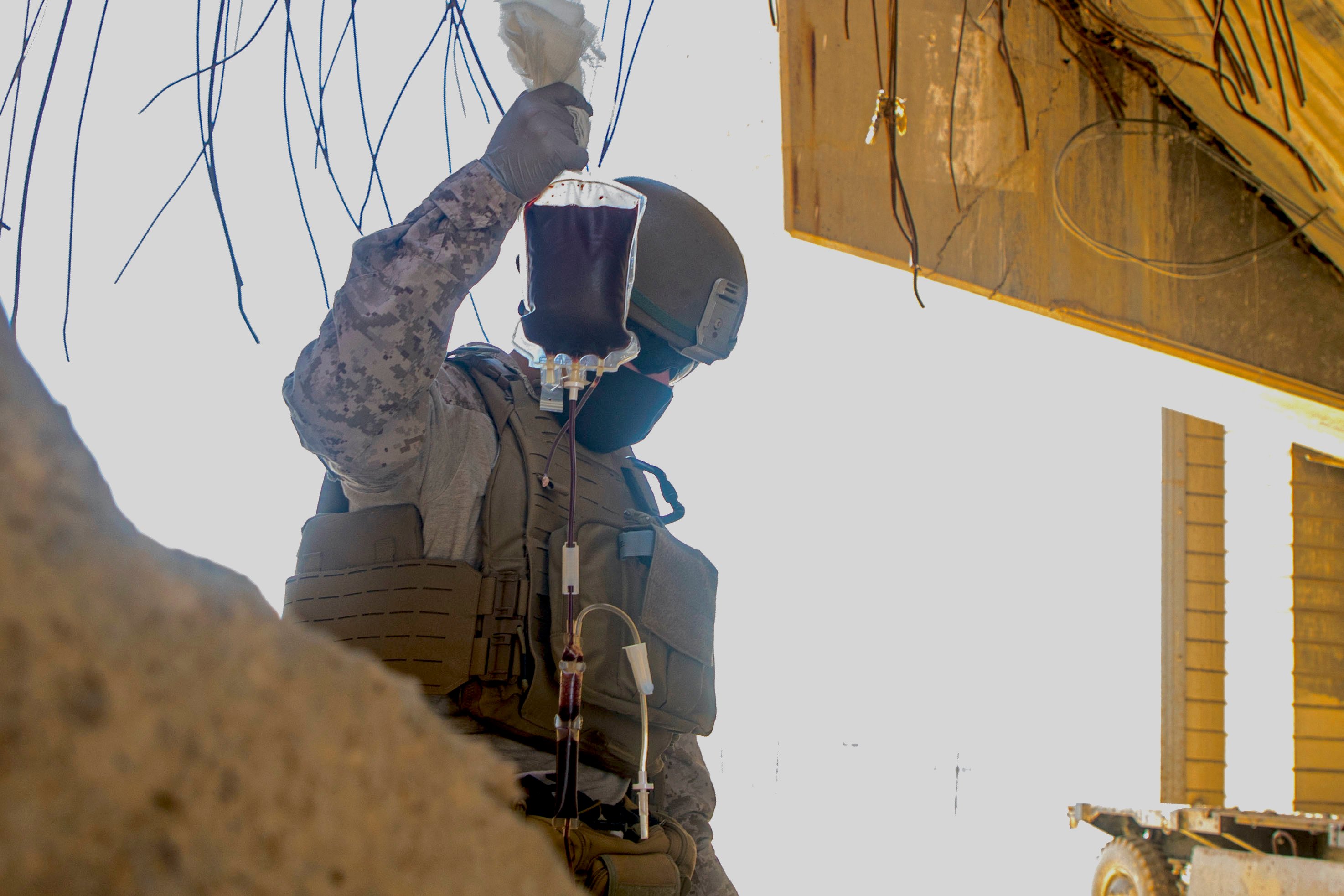 Every unit in the 1st Marine Division has had corpsmen trained in the whole-blood program, Peterson said, including about 40 sailors supporting SPMAGTF-CR-CC’s four elements. “We are the first MAGTF to deploy to the Middle East and CENTCOM with the capability,” he said.

The kits are also getting fielded to other Marine Corps units, Peterson said. “We want this to become a program of record, and not just done within 1st Marine Division.”

Peterson, who enlisted in 2002 and made multiple deployments for operations Iraqi Freedom and Enduring Freedom, noted that he himself had been wounded. “We had a 97 percent hemorrhage survivability rate during OIF/OEF. The problem with that number is – as great as it is – there is still that 3 percent,” he said. Some of that 3 percent “could have survived if we had the capability” to provide fresh whole blood.

“This asset shortens that gap – that 3 percent – to make that even smaller for the next war or conflict that we may have that we see trauma,” he added.

The new kits have universal appeal to units regardless of their operational environment or mission. The Special Purpose MAGTF is CENTCOM’s quick-reaction force that would be called upon when needed to conduct a wide range of missions, any which could potentially require such lifesaving, front-line treatment for a casualty.

“We could be responding to potential firefights or maybe a humanitarian mission or some other potential action … so having corpsmen with this ability to respond to an incident is definitely a huge asset for us,” Nardi said.

“Marines are always there for each other, and [the EFWB program] is one more way they demonstrate that,” 2/5’s battalion commander, Lt. Col. Isaac Moore, said in a statement. “One individual literally giving his own blood to save a fellow Marine increases cohesion. In a sense, the unit can use the healthy life-blood of one Marine to sustain another. That’s a pretty powerful idea that makes a unit incredibly resilient.”