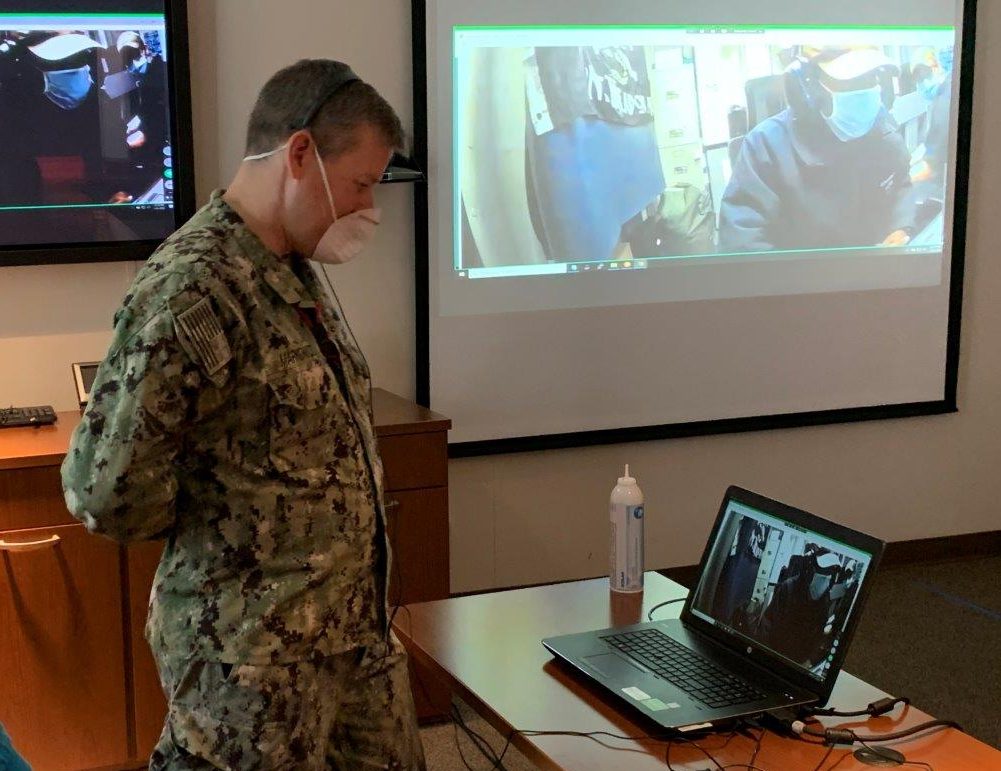 Capt. John Markowicz, assistant chief of staff for ship maintenance and material readiness, Commander, Naval Air Forces, observes the Distance Communications Maintenance System (DCoMS) ship-to-shore test between the Naval Information Warfare Center Pacific and USS Ronald Reagan (CVN 76), while the aircraft carrier was underway in the Indo-Pacific region. DCoMS allows shore-based technical experts to remotely walk shipboard technicians through a higher level of maintenance or troubleshooting than the technician would normally have the capability to perform. US Navy photo.

If the COVID-19 pandemic has forced people to get comfortable with the idea of teleworking and telehealth doctor visits, it may have also pushed the Navy to embrace the concept of telemaintenance for ships at sea.

The Navy is testing out a distance maintenance tool on two aircraft carriers that has been in the works for the last couple years but was fast-tracked to the fleet due to pandemic-related travel restrictions that make it difficult to move technical experts around the globe to support deployed ships at sea.

Though carrier strike groups deploy with a significant amount of in-house repair and troubleshooting expertise on staff, sometimes problems come up that can’t be fixed without the help of experts back at Navy warfare centers, fleet headquarters or other ashore commands. Distance Communications Maintenance System (DCoMS) would allow a maintainer on a carrier at sea to have a secure video chat with an expert and try to make the repair with virtual assistance, rather than keeping the system down until an expert can be flown into the region – and, with COVID restrictions, quarantined for 14 days before being brought aboard the carrier.

The DCoMS idea dates back to 2014 and has been trying to make the leap from ground-based testing to an at-sea demo on an aircraft carrier since 2018. The DCoMS is a “lightweight, transportable kit comprised of two 25-pound backpacks holding a compact, stand-alone server; laptop and/or tablet; mountable cameras; and noise-canceling headphones for use in otherwise high-noise-level situations,” according to a Navy description.

Capt. John Markowicz, the assistant chief of staff for ship maintenance and material readiness at Naval Air Force Pacific, and Capt. Charles Ehnes, the in-service carriers program manager at the Program Executive Office for Aircraft Carriers, told USNI News that DCoMS is being tested on both USS Ronald Reagan (CVN-76) and USS Nimitz (CVN-68) today as part of an accelerated research and development effort that Navy leadership backed due to the great need to keep readiness of deployed ships up regardless of whatever challenges COVID brings.

Markowicz said he was thinking one morning in April about how AIRPAC would get technical experts out to Reagan, the Japan-based forward-deployed carrier, if there was a maintenance emergency. Japan had instituted a two-week required quarantine for anyone coming into the country, which presented an additional layer of complexity.

“Why don’t we get this DCoMS system up and running? Let’s make the most of this and use this crisis as an opportunity to do something more for the fleet,” he said of a conversation he had with a colleague that morning.
“Now we have a daily drumbeat where we’re trying to figure out how to best employ this.”

Prior to this spring, DCoMS had done land-based testing, where a person in a mock carrier machinery space used the equipment to connect to a person at another location to ensure it worked. The system was later taken out on a Self-Defense Test Ship out of Port Hueneme and used DCoMS to call back ashore, further increasing the confidence it in. But the fleet and the program office hadn’t gotten to the point of testing it at sea on a carrier – something that was planned for late March but was scrapped when the COVID pandemic first hit the U.S. Markowicz and Ehnes explained that they were able to get an interim authority to use DCoMS on Reagan first, and then Nimitz, using a research and development-focused communications network to connect DCoMS on the ship, through satellites in space, to Naval Information Warfare Center Pacific (NIWC PAC)at Point Loma, Calif., to kick off this first at-sea demonstration of the capability.

Ehnes said during the call that the hardest part was mapping the network of how the camera images and voice communication would get from the sailor on a carrier to the engineer on the other end, and ensuring that each node along the way was reliable and also safe from a cybersecurity and information assurance standpoint.

By May, just a month after Markowicz’s conversation about how to support Reagan during the pandemic, the group had – “with a sense of purpose due to the COVID crisis,” he said – gotten interim authority to operate with the Defense Research and Engineering Network (DREN) on Reagan.

“Extra work was done and midnight oil burned” to move so fast, Ehnes said, but Navy leadership up the chain of command realized with this could improve deployed carrier readiness despite COVID.

The need to support deployed ships “moved it up the queue, not only within the program office, which really had the right sense of motivation, but all the people along the way that need to validate we’ve done things properly and we’ve done all the proper engineering and authorities. Rather than us starting at the bottom of the queue and slowly waiting our turn, they understood the opportunity that this provided to the fleet to improve readiness, and also great support from the Navy flag community and all the up through a positive endorsement from [the assistant secretary of the navy for research, development and acquisition]. That really helped get this thing prioritized to get it through all the wickets,” Ehnes continued. 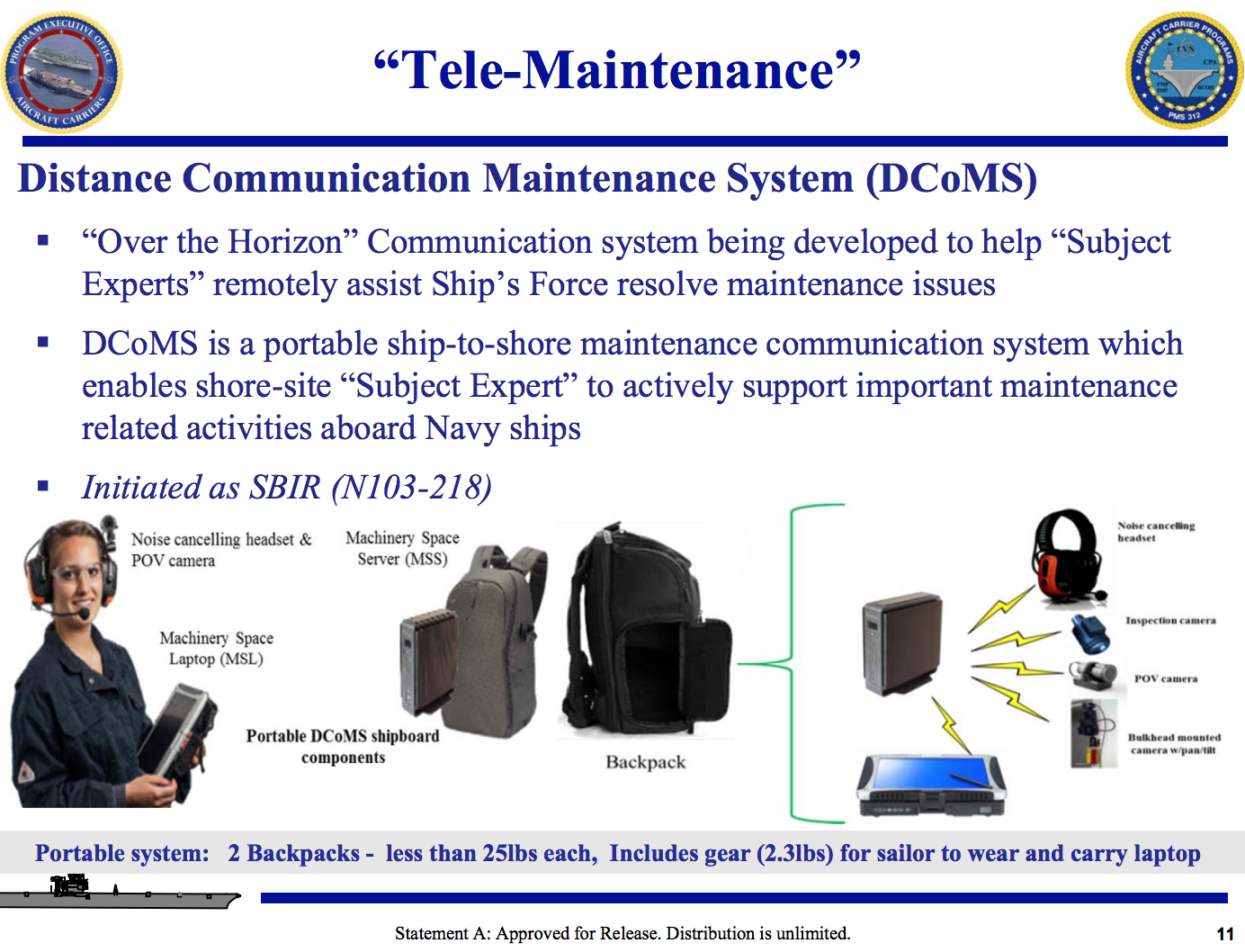 Markowicz said the DCoMS gear was sent to Reagan, where Information Systems Technician 1st Class James Davis “plugged it into the wall, and off he went.” The portable system was set up with a camera on the sailor’s helmet and other cameras in the room pointed at what he was working on, and the audio was “surprisingly very clear” given how it gets compressed and sent through satellite communication.

Ehnes and Markowicz said the Reagan and Nimitz teams would go through a testing plan to see how the system works in various parts of the ship, if there are any dead zones not near enough to a network connection, and more. The teams can also use the system for actual maintenance challenges that arise, too, putting the system to its intended use.

Markowicz said that, from the fleet perspective, a next step would be getting the back end of DCoMS set up in additional ashore locations beyond just Port Hueneme. Philadelphia would be the next location he’s eyeing.

“That brings in additional technical expertise, where Port Hueneme is strong on combat systems support there, and then Philadelphia is more of experts on hull, mechanical and electrical systems. So the more sites we can get up and tested with Reagan or Nimitz, the more capability we can bring to trouble-shooting,” he said.

Having more ashore experts available means that more departments on a carrier would have access to remote maintenance help, which Markowicz said would be great for readiness. There would be some issues that arise – talking about how to fix a combat system has more classification issues than talking about how to fix a mechanical system on the ship – but he said the next phase, from his perspective, would focus on expanding who on the ship can reach back to their experts ashore remotely. 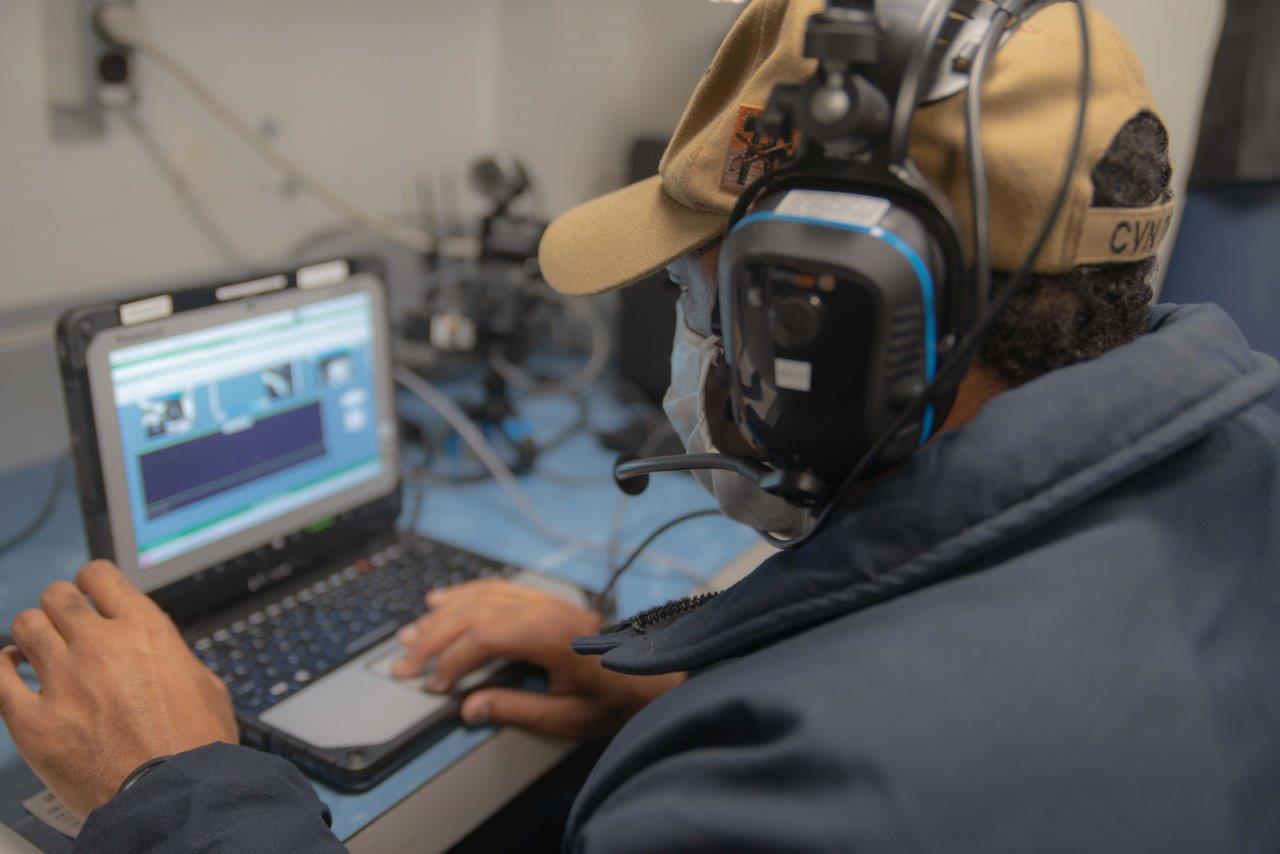 From the program office perspective, Ehnes said he hopes to get the connection moved off the DREN network and onto the main Navy and Marine Corps Internet (NMCI) connection. He said he also wants to see some minor upgrades to the kit included in DCoMS – but mostly, he just wants to see more DCoMS units fielded.

If the Reagan and Nimitz demonstrations prove successful, the benefits could spread well beyond the aircraft carrier fleet. Markowicz said the aviators are already interested in being able to connect squadrons deployed on carriers to jet maintainers ashore, and the surface ship community too has noted the need to connect ships with experts at centers of excellence without having to fly personnel onto ships and break the COVID-free “bubble” that the Navy was working so hard to maintain to keep deployed sailors safe.

On the surface ship side, “the interest is absolutely there. My boss, in his run-up to briefing senior leadership to answer the question, hey, what are you doing to respond to the COVID crisis, brought this system into the mix. The Pacific Fleet commander and the PACFLT staff is well aware of it and looking forward to opportunities to get the surface and submarine navy on it. This is not something that I think needs to be unique to the carrier. Certainly, the communications paths on the carrier are very robust, being a strike group staff ship, but there isn’t any reason we couldn’t work this with the [expeditionary strike group], the large-deck amphibs, and other platforms as well,” he continued.

Ehnes added that “I don’t know what the topology on a destroyer is and what differences would be necessary to accommodate DCoMS on a cruiser or destroyer (from an IT standpoint). But we already have as part of a deployed carrier strike group indigenous strike force intermediate maintenance activity capability, where you have sailors on various ships with specialized skills, and they keep a catalog of people who have picked up skills throughout their years, and sailors are flown from one ship to another to assist each other in troubleshooting repairs. Adding a DCoMS kit to the mix to help make that capability even stronger is definitely one of the things that we’re going to go after.”

Markowicz said the Pacific Fleet has had more exposure to DCoMS than has U.S. Fleet Forces Command on the Atlantic side, “but it won’t be long before this takes off like wildfire, I’m sure of it.”

Though already a promising technology before, COVID “definitely helped inspire a sense of urgency and a sense of purpose for something that really could be a benefit to the fleet.”