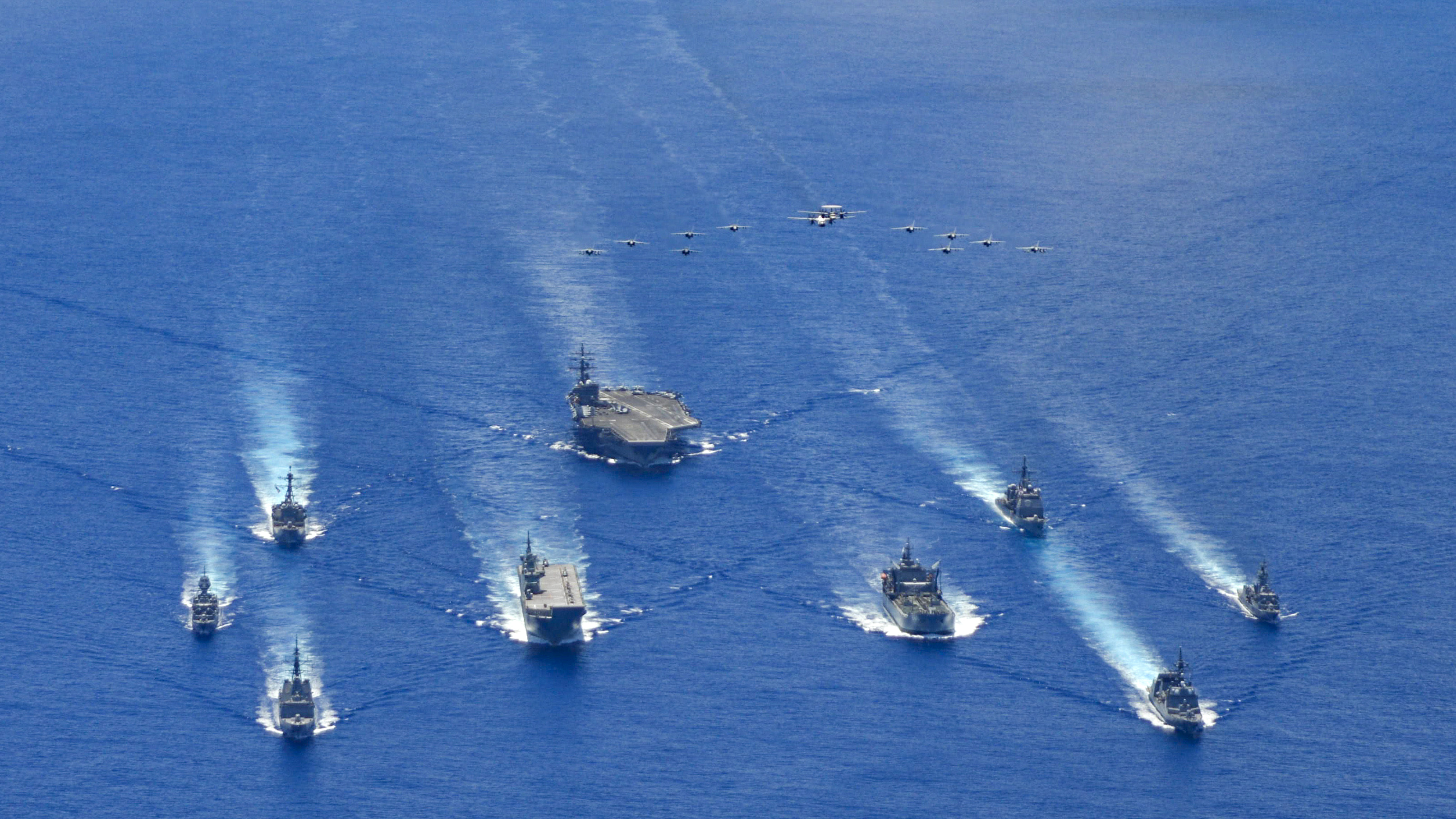 The Ronald Reagan Carrier Strike Group is now operating alongside Australian and Japanese forces in the Philippine Sea in a large trilateral exercise involving nine ships, a carrier air wing and other aircraft, the Navy announced on Tuesday.

The Reagan CSG had been operating with the Nimitz CSG in a series of American dual-carrier exercises in the Philippine Sea and South China Sea, and is now working with a Japanese destroyer and an Australian task force led by one of its two amphibious assault ships.

“The opportunity to work alongside the U.S. and Japanese is invaluable,” Commodore Michael Harris, commander of the Australian Joint Task Group, said in a Navy news release.
“Maintaining security and safety at sea requires navies to be able to cooperate seamlessly. The combined tasking between our navies demonstrates a high degree of interoperability and capability between Australia, the U.S. and Japan.”

“I believe strengthening cooperation with the U.S. Navy and Royal Australian Navy is vitally important for Japan, and also contributes to a free and open Indo-Pacific in the region,” Capt. Sakano Yusuke, the Escort Division 4 commander, said in the news release.
“The experience in this exercise will give us tactical and operational advantages and make our friendships stronger, in addition to our regular joint exercises with both like-minded navies.”

The exercise began July 19, and though the Navy did not list what activities will take place, the news release notes this reflects “an all-domain warfighting environment” and allows the forces to increase their readiness and interoperability.

“The high-end interoperability we enjoy with the JSMDF and ADF provides us the unique ability to meet at sea and immediately operate at an advanced level. This highlights the enduring nature of our alliances with Japan and Australia,” Capt. Russ Caldwell, the commanding officer of Antietam, said in the news release.
“The United States is fortunate to routinely operate alongside its allies across the Indo-Pacific, and coordinated operations like these reinforce our mutual commitments to international maritime norms and promoting regional stability.” 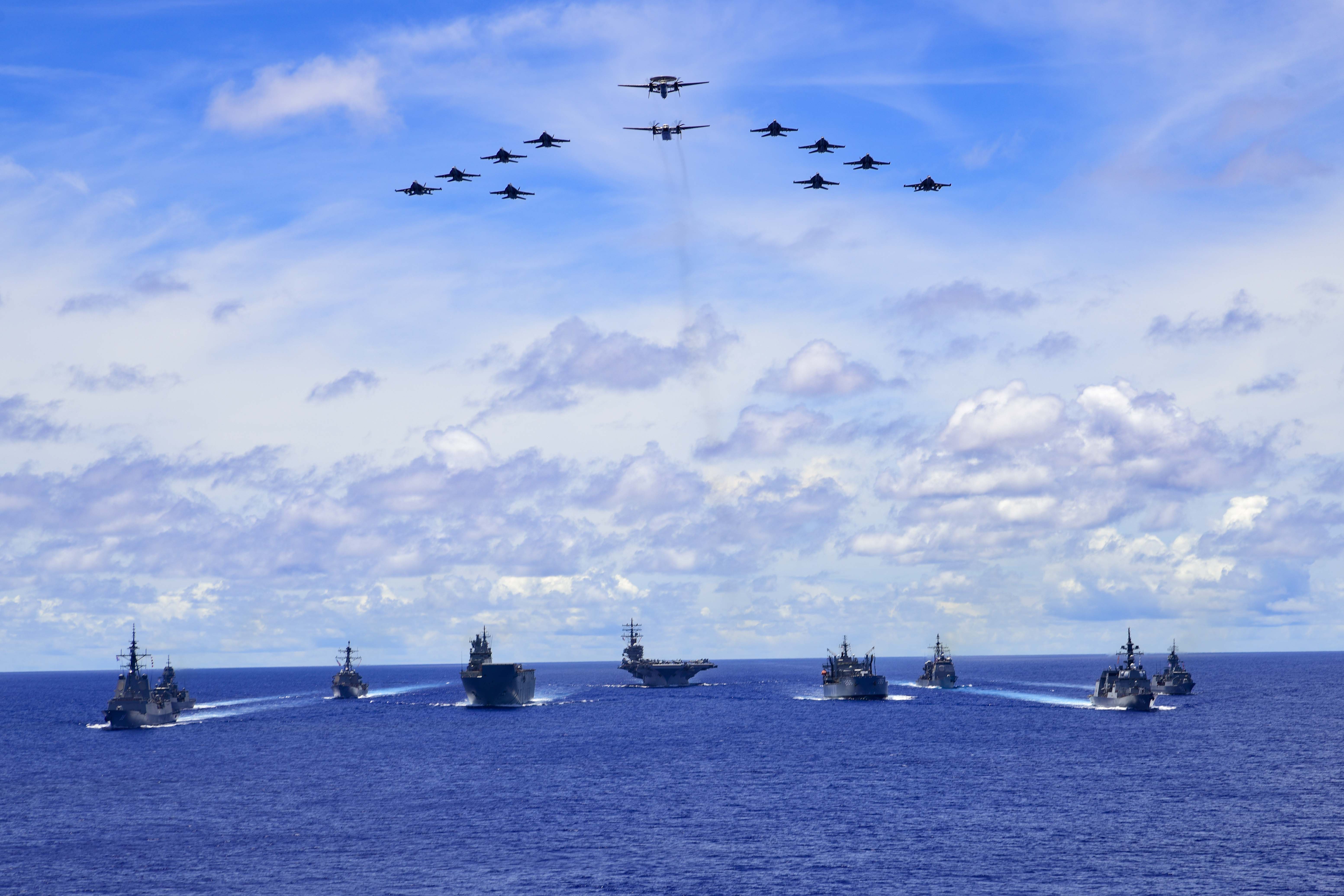 The Ronald Reagan Carrier Strike Group and units from the Japan Maritime Self-Defense Force (JSMDF) and Australian Defense Force (ADF) participate in trilateral exercises supporting shared goals of peace and stability, while enhancing regional security and the right of all nations to trade, communicate, and choose their destiny in a free and open Indo-Pacific. US Navy photo.

Separately, Navy and JMSDF forces are conducting a mine warfare exercise off the coast of Northern Japan this week.

Mine Warfare Exercise (MIWEX) 2JA 2020 kicked off on July 20 and is the 39th U.S.-Japan bilateral minesweeping exercise the two navies have conducted.

“Working with our JMSDF allies to keep our mine countermeasure skills sharp is absolutely essential,” Rear Adm. Fred Kacher, commander of Expeditionary Strike Group 7, said in a news release on the exercise.
“Maintaining open sea lanes for both military and civilian shipping in this important region is paramount for the free flow of trade and this exercise provides the experience our teams need to keep waterways safe for mariners throughout the Indo-Pacific.”

“I feel very grateful that, despite the influence of COVID 19, mine warfare forces of both Japan and U.S. have conducted exercise as scheduled together, which demonstrates strong bonds between the JMSDF and the U.S. Navy as well as our readiness even under this difficult situation,” Rear Adm. Fukuda Tatsuya, commander of the JMSDF Mine Warfare Force, said in the release.
“The aim of this exercise is to enhance the interoperability among all participating assets on both sides and to improve the mine countermeasure skill as well.”

The exercise includes mine detection, hunting and sweeping and also works on the ability for the two navies to coordinate and share information during these activities.

The U.S. Navy sent Avenger-class mine countermeasures ships USS Patriot (MCM-7) and USS Pioneer (MCM-9) – two of the four MCMs based in Sasebo, Japan – and the staff from Mine Countermeasures Squadron 7.