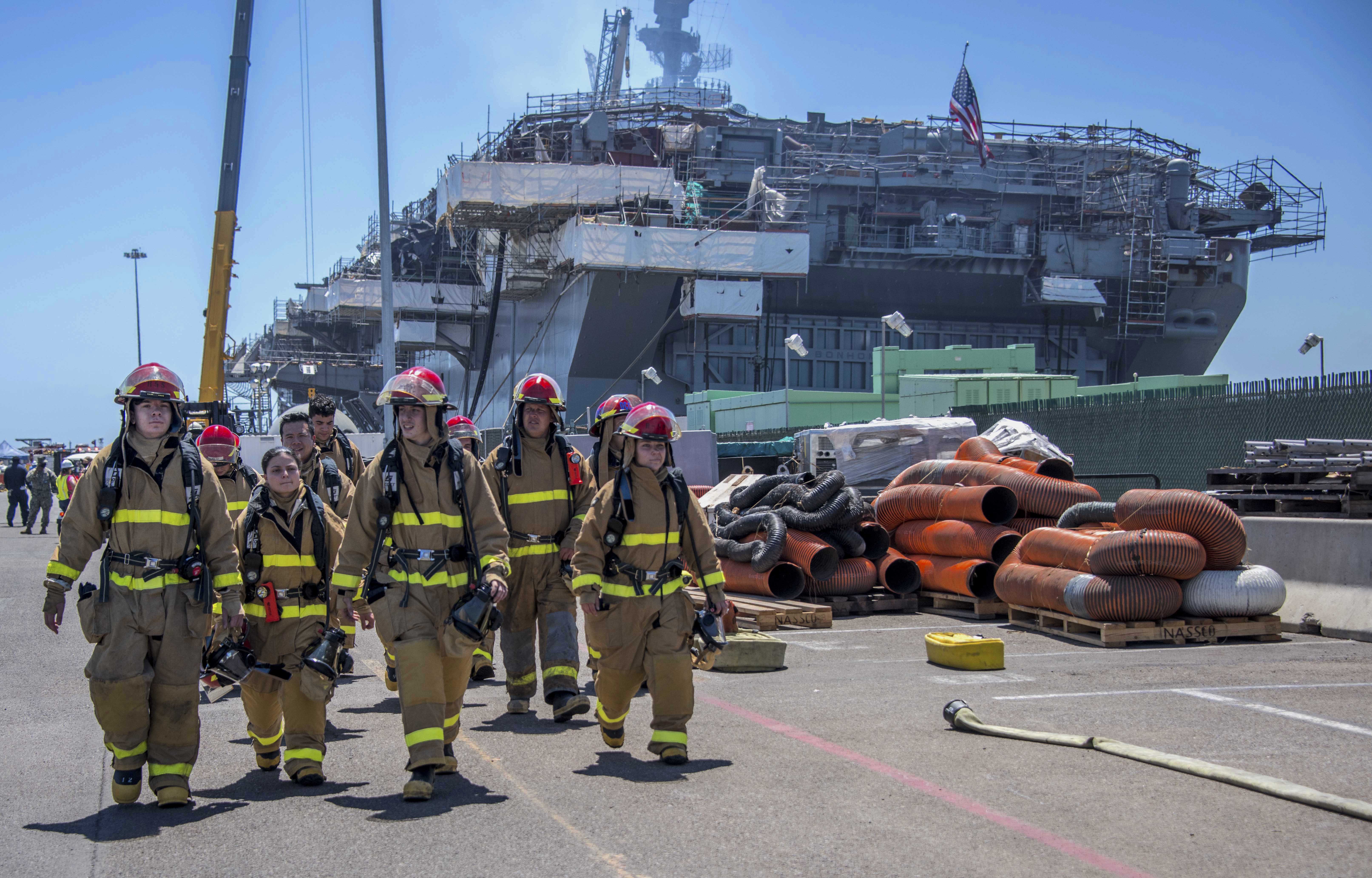 This post has been updated with more information from the Navy.

SAN DIEGO, Calif. – Navy officials declared all active fires aboard USS Bonhomme Richard out after more than four days of battling the blaze.

“Our fire teams are investigating every space to verify the absence of fire. Until every space is checked and there are no active fires we will not be able to commence any official investigations,” Rear Admiral Philip E. Sobeck, the commander of Expeditionary Strike Group 3 said in a Thursday statement.
“We did not know the origin of the fire. We do not know the extent of the damage. It is too early to make any predictions or promises of what the future of the ship will be. We cannot make any conclusions until the investigation is complete.”

The Navy pulled off all firefighting crews and personnel aboard USS Bonhomme Richard (LHD-6) and on Pier 2 late Wednesday, after the blackened and still-smoking amphibious assault ship shifted and listed further, officials said.

Crews were back aboard by dawn Thursday, however, and in a morning update Naval Surface Force Pacific announced no additional injuries as the firefighting effort entered the fifth day. Water drops from helicopters had continued through Wednesday as 300 sailors and firefighters inside the ship worked to put out hot spots and respond to any flareups that could cause more damage and spread.

In a photo released and posted on SURFPAC’s “Surface Warriors” official Facebook page, the ship had an obvious tilt, or list, to the port side. On Thursday morning, white smoke still poured out from the forward part of Bonhomme Richard, but far less than in the first two days after the fire began at 8:30 a.m. Sunday.

Investigations into the cause of the fire and resulting damage and assessments are in their early stages.

“We had 63 personnel, 40 U.S. Navy Sailors and 23 civilians, treated for minor injuries including heat exhaustion and smoke inhalation. We have no personnel hospitalized,” Sobeck said.
“The Navy continues to work together with regulators, county and state in protecting our environment and preparing to address the community’s concerns as we move forward to the next phase.”

“I want to express the utmost appreciation for all of the help and support provided to our team during the recent crisis we are facing on board USS Bonhomme Richard,” Thoroman wrote. “I am beyond grateful for the countless professionals who contributed to our efforts to save our Ship. Lives were saved!

“The overwhelming support we received from all waterfront commands, Federal Fire Department, Naval Base San Diego, tenant shore commands, and myriad of other entities have been nothing short of inspiring. The facilities, food, water and prayers were critical to the operation and sailors’ morale. Because of the comfort that you all have provided, USS Bonhomme Richard remains afloat. 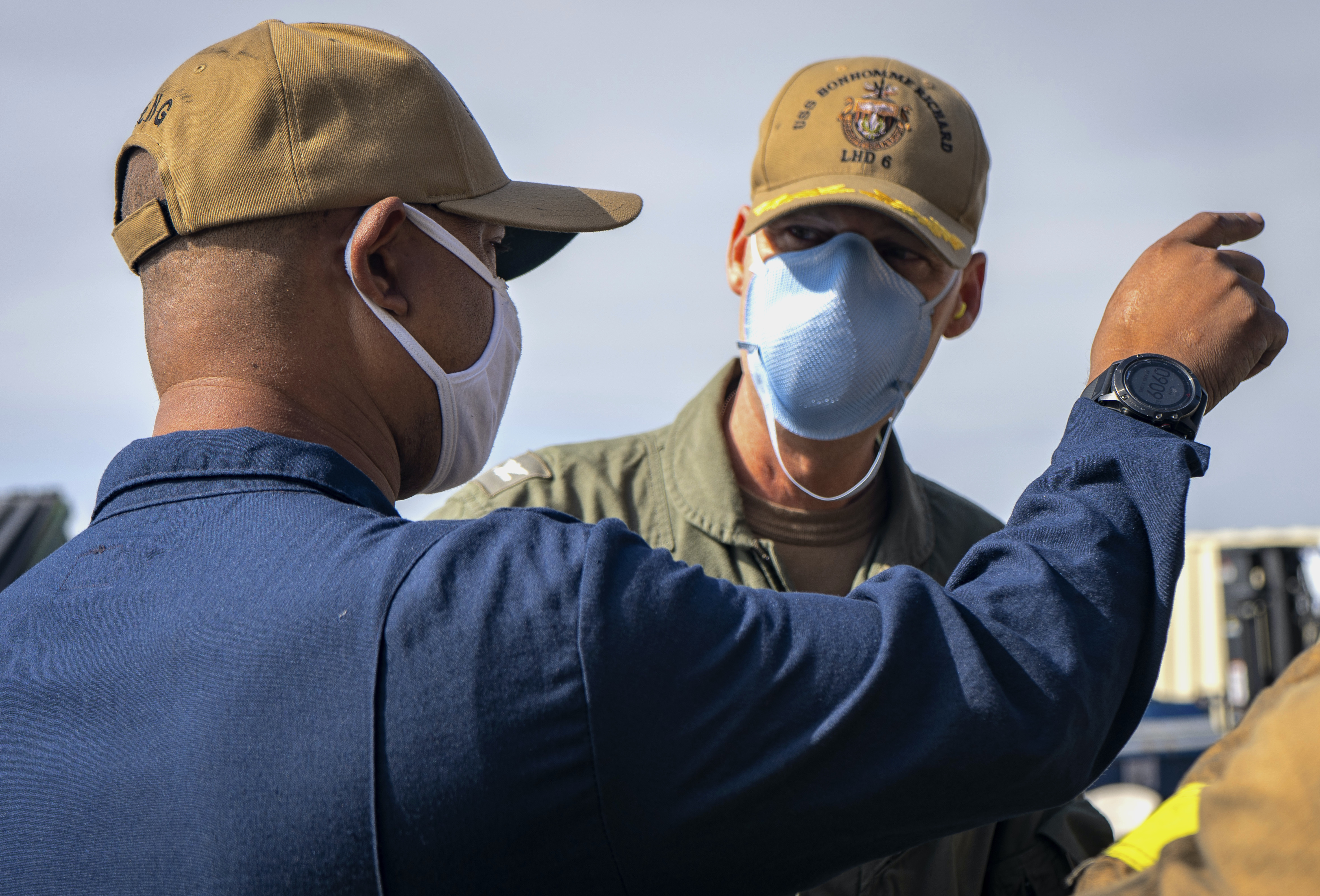 “The sailors of the USS Bonhomme Richard have demonstrated courage in the face of the fire. Their strength and resilience has been eye-watering. Their community, especially individuals such as you and your team, have shown them overwhelming support and kindness. I want you to know that over the past few days, I have seen it in every Sailor and have heard them say John Paul Jones famous quote, ‘I have not yet begun to fight’.

“Thank you again for all your help and support you have provided. Please pass along my sincerest gratitude to your team.”

Thoroman, a former aviation electronics technician and veteran helicopter pilot, took command in November after a 14-month tour as the ship’s executive officer.