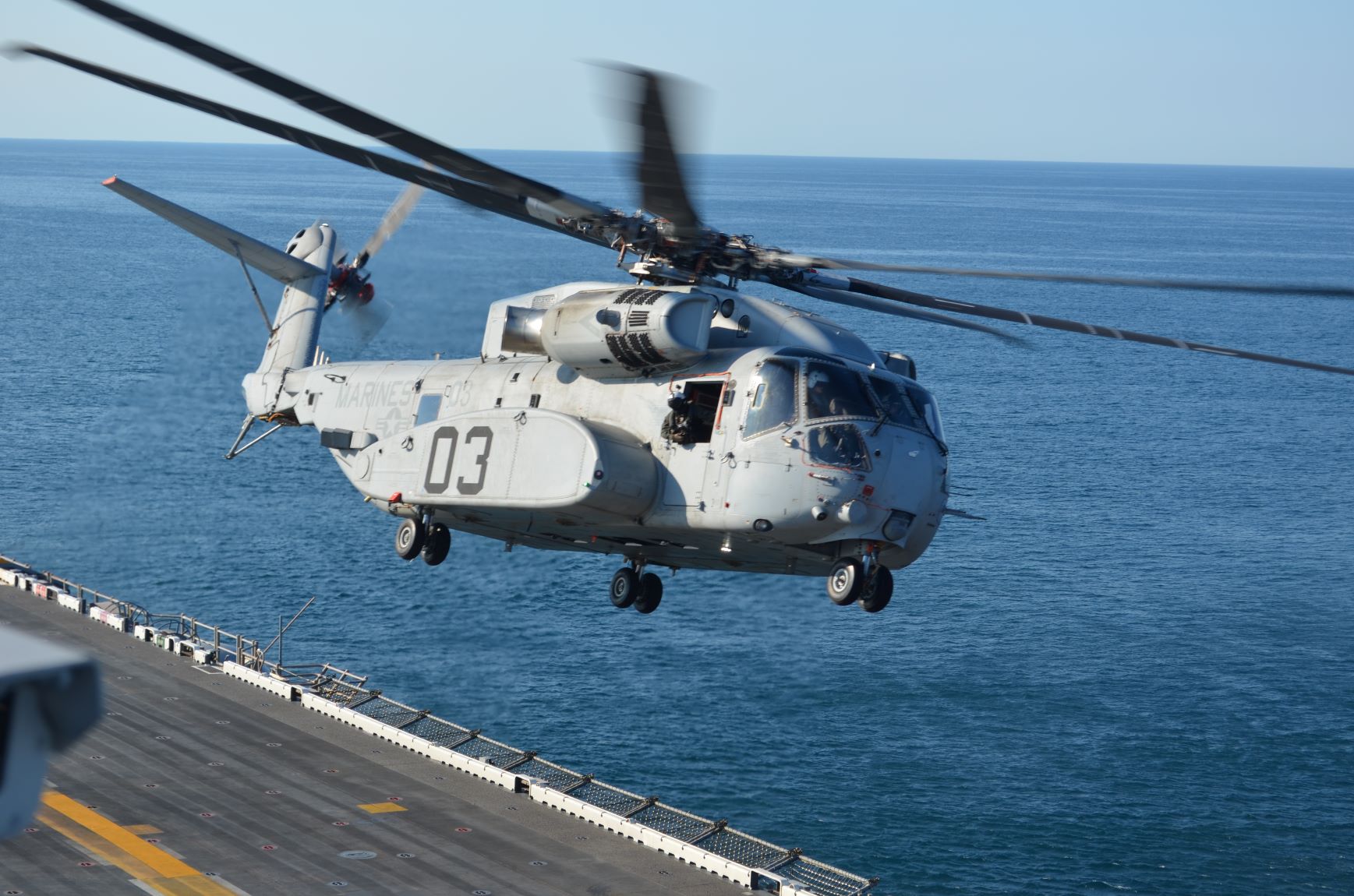 The Marine Corps wrapped up its first sea trials with the new CH-53K King Stallion, crossing off one of the last big items on the to-do list before the heavy lift helicopter program can turn the aircraft over to the fleet for operational tests and a 2023 first deployment.

The 53K operated from USS Wasp (LHD-1) at sea from June 8 to 21, conducting more than 360 landings and takeoffs during that time in all kinds of wind conditions to prove that the helicopter was able to operate from a ship on deployment.

The helicopter conducted two flight periods a day, one in daylight and one at night – taking off, with the pilots recording notes on the difficulty and safety of that particular evolution; flying a mile or so from the ship; flying back in the traditional landing pattern to attempt a landing; recording notes on that landing; and then the ship turning into a new wind condition for the process to start over again.

Though sea trials with some other programs have exposed problems that needed to be addressed through technical or procedural changes, “we were very fortunate; we did not find that big thing that was going to cause us risk or delay or a big technical issue. With this, we have now gone through this program and hit pretty much everything that they aircraft needs to do in order to deploy. We still have some more data to take, we have some tests to finish up, but we’ve been to every big thing,” Perrin said.

“We’ve done the external loads, done the internal loads, we went out and did helicopter aerial refueling, and now we’ve gone to the ship and been out there and seen that. Our risk on this program, for the 53K not being able to go out and support that first deployment and get through [operational testing], is greatly reduced now because of the success we’ve had and the performance the aircraft has shown during this test and the test previous. So we’re pretty happy as a program.”

Perrin said that, having just come back ashore this week, the final report from testing wasn’t complete yet. There were likely some little ways where the program can make improvements ahead of handing the aircraft over to Marine Corps operational testers this fall, he said, but there were no “show-stoppers” that caused him concern.

About 98 people flew out to Wasp for the sea trials, with the integrated test team including representatives from the NAVAIR program office, manufacturer Sikorsky and the Marine Corps’ operational test community.

A key feature of the King Stallion compared to the CH-53E Super Stallion – aside from being able to lift more – is that it’s much easier to operate due to the fly-by-wire flight control system.

Perrin noted the ease of operations during the April 6 aerial refueling test with a KC-130 tanker, saying, “it’s usually a pretty difficult, demanding task, but the 53K handled that extremely well and we had very good handling qualities out of that.”

During sea trials, the colonel added, “the handling qualities of the aircraft at the ship were excellent. All the initial pilot feedback has been that the handling qualities of the 53K on all spots, day, night, in [night vision goggles], was very very good. They were all very impressed … (with) how much easier it was for the pilot to actually come back and land on the ship because of the flight control system, because of the fly-by-wire system on the 53K, which is very good.”

Maj. Joshua Foxton, a test pilot with Air Test and Evaluation Squadron (HX) 21, served as a project pilot during the sea trial flights. Foxton is an experienced CH-53E pilot and has been a flight instructor, having to sit in that non-flying pilot seat during training in difficult environments and be ready to grab the controls if something went awry. He described to USNI News in a statement the difference between the legacy 53E and the new 53K.

“A low light level landing to a ship is one of the hardest things we do in Marine Corps aviation. You have little to no horizon, and poor visual cues for closure rate to the vessel. In the 53E, we train for months to achieve a safe and combat ready crew. With the 53K, the flight controls and overall stability of the platform allow for a near hands-off approach and landing. I have never felt this comfortable and confident while operating around the boat, and the capability it gave me to simultaneously engage in other tasks was truly inspiring,” he said.
“This aircraft will give our 53 warfighters an opportunity to safely and effectively fly the aircraft, while also maintaining global situation awareness, around the complicated environment that inherently follows [Marine Expeditionary Unit/Amphibious Ready Group] operations.” 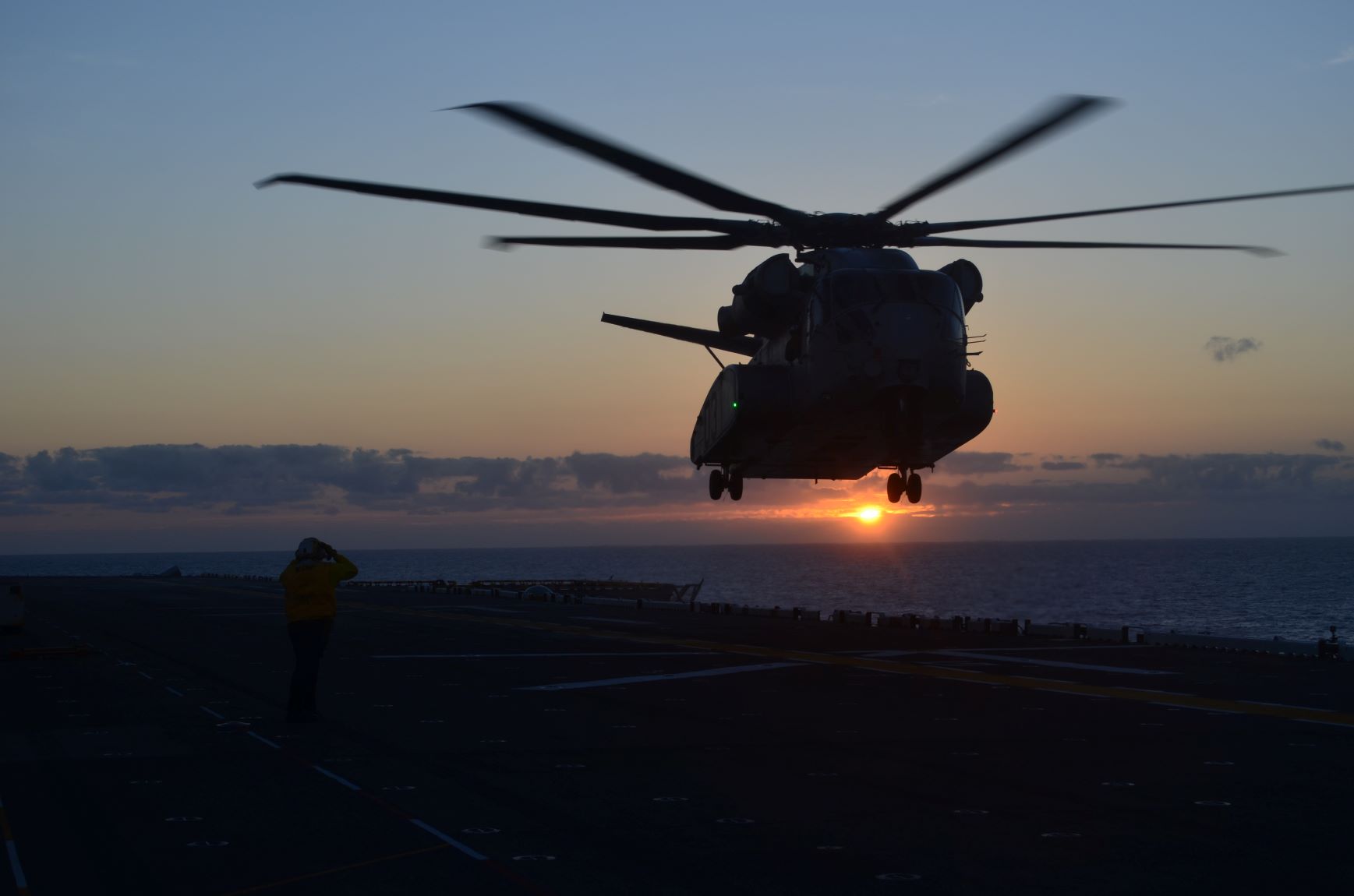 Perrin said one of the highlights of sea trials was having Foxton and a dozen other operational test Marines out on the ship, with pilots in the cockpit, crew chiefs in the back of the helo and maintainers on the ship – all getting a sneak peak at how this helicopter compares to its predecessor.

“They now understand what it can do and what tactics, techniques and procedures, or TTPs, that they’re going to need to adjust from what we do with the 53E to how the 53K operates. So they are getting a complete heads start on having those tactics, techniques and procedures developed, so that when they go to the official IOT&E or initial operational test and evaluation, they’ve already been on the aircraft, they’ve already been flying the aircraft, they’ve already seen this,” he said.
“When they go out to the ship as part of the test – and they will go out to a ship as part of the IOT&E – they’re going to be running instead of learning at that time. They’re going to be executing. And that’s the key of an ITT or integrated test team, is that everybody gets to learn together.”