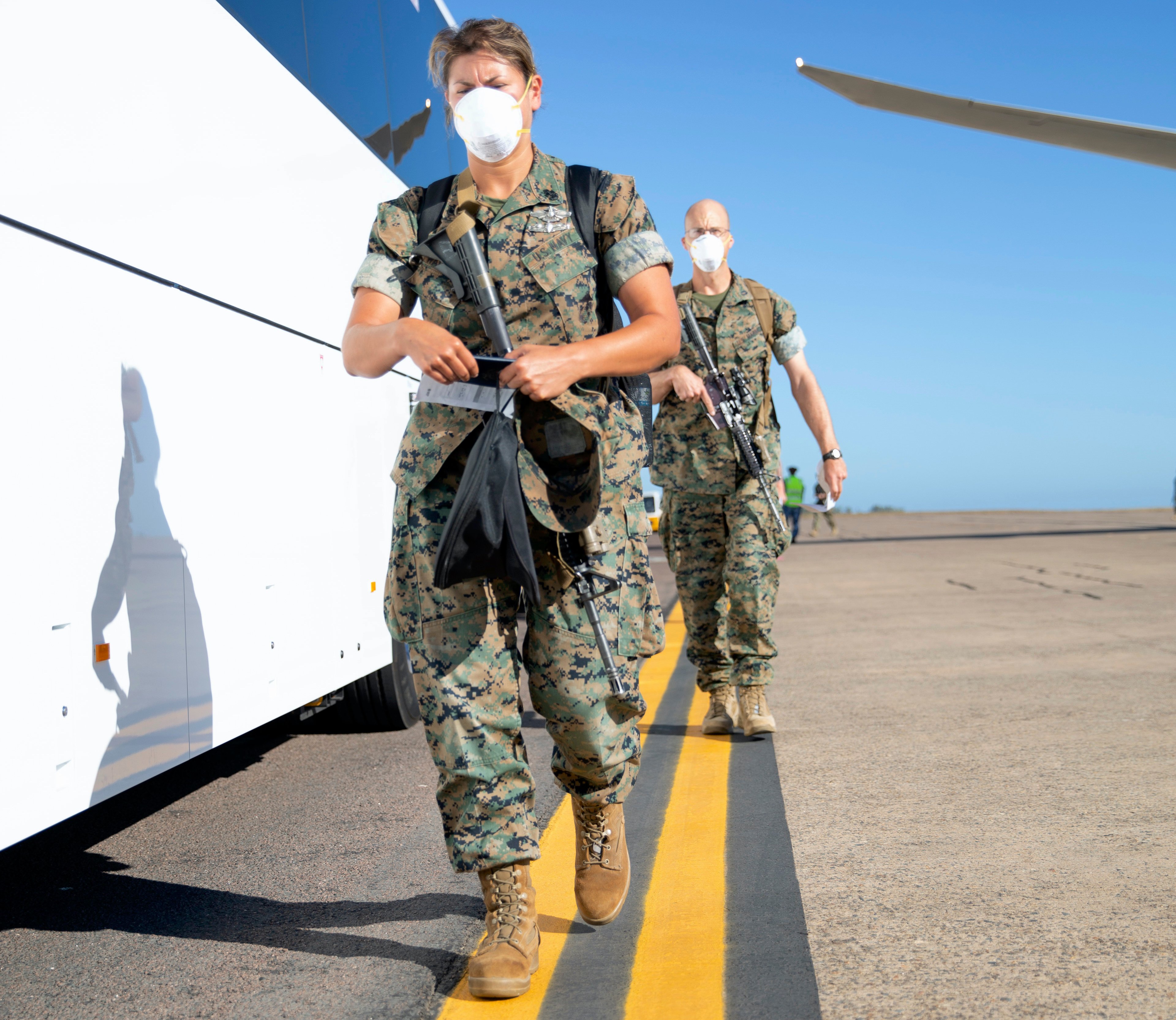 This year’s deployment to Darwin, in Australia’s Northern Territory, hasn’t gone as initially planned. Travel restrictions and quarantining requirements due to the novel coronavirus drove the Marine Corps to send a smaller, 1,200-member force for the rotational deployment program, now in its ninth year. That’s less than half the size that deployed in 2019, the first time Marine Rotational Force-Darwin reached its 2,500-personnel maximum.

Once the last group of Marines and sailors arriving in Australia gets cleared from a mandated 14-day quarantine, the training tempo will pick up quickly ahead of an annual exercise aimed at improving bilateral interoperability, senior commanders said this week.

The MRF-Darwin commander is optimistic the deployment will be valuable for his force and their Australian counterparts as they train together and build on bilateral military ties.

“The COVID thing definitely threw a wrench in the works here,” Col. David Banning said in a conference call with reporters last week from Darwin.
“But I think it definitely demonstrates the strength of the Australian-U.S. relationship that – even in spite of that and all of the uncertainty surrounding that – we’re still able to deploy a force this size, literally from across the Pacific, and still consolidate them down here and still get after these bilateral training goals and interoperability demonstrations that we have.”

Training will ramp up when everyone is out of the 14-day quarantine. “We already have range time scheduled for them, and they’ll be moving to the field to begin training,” Banning said. “The training is going to begin here in the next couple of weeks.”

The deployment will culminate in exercise Koolendong in September with Australian Defence Force units.

The MRF-Darwin force training will chip at some broader concepts the Marine Corps has experimented with in giving small units operating over dispersed areas more firepower, maneuver capabilities and sustainment from afar, whether they’re on a desolate battlefield or an island-chain battlespace. That includes working on a lot of integrated command-and-control connectivity issues, Banning said.

“We’re looking to integrate” the training, tactics and procedures that tie into broader training and strategic goals set by the commandant, Gen. David Berger, in his planning guidance and future Force Design 2030 plan, he said. “We’re going to be working on incorporating as many of the goals that he has established for the Marine Corps as a whole … (and) doing what we can to advance the Marine Corps’ modernization within the construct of MRF-D with our ADF partners,” a long-time U.S. strategic ally.

Coordination and integration of those units, “both unilaterally and bilaterally, are key focus areas for this MRF-D deployment,” Banning said. “We’re really looking forward to the opportunity, now that we’re starting to get forces out of the quarantine… and get them ready to get out in the field and start getting down to brass tacks with how we’re going to do these things.”

Their ADF counterparts have trained with prior years’ rotational units, said Royal Australian Air Force Group Capt. Stewart Dowrie, who commands the ADF Northern Command based in Darwin. “It’s great to be able… to innovate and get the people together in the field and work through the problem and the new technologies and the new concepts that are being rolled out.”

Limited air but no ship 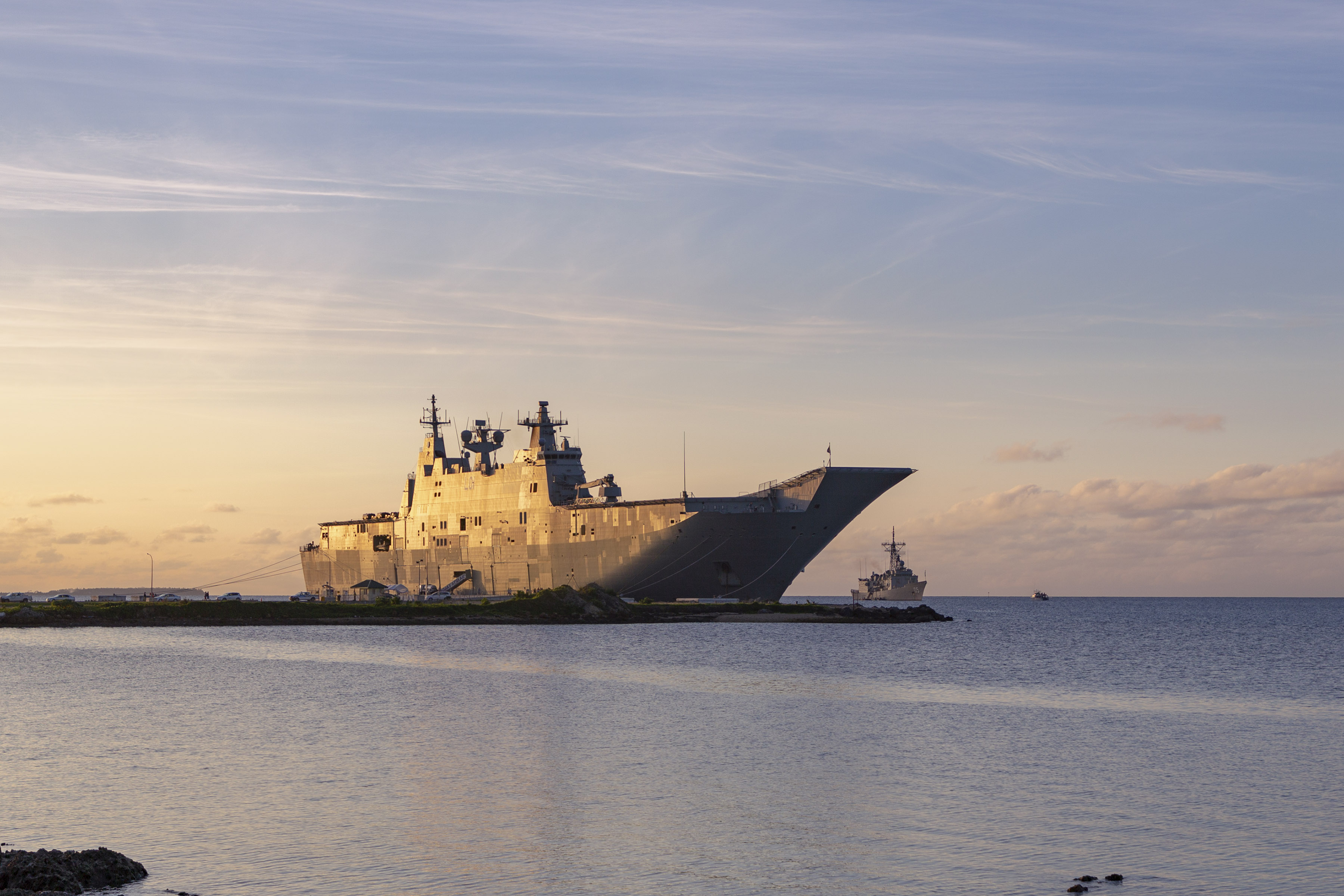 But it’s not the larger MAGTF originally expected. The Marine Corps didn’t send aviation units this year, unlike last year when MV-22 Osprey tiltrotors and helicopters joined the force. But new this year, a RQ-21 Blackjack drone detachment from Marine Unmanned Aerial Vehicle Squadron 3 from Hawaii will soon will join the force, Banning said Thursday.

The initial plan “had included a more robust aviation capability,” he noted. But it’s “still a very capable force, still very capable of achieving the goals that we established for MRF-D and the bilateral operations with our Australian partners.”

The RQ-21 will give the ADF a chance to learn more about the system and its capabilities. The Royal Australian Air Force already is getting the MQ-4C Triton, a high-altitude and long-endurance maritime-capable UAV, and plans to get the MQ-9 Reaper drone, Dowrie said.

With the Blackjack’s capability to monitor remote battlespace and areas, “we’re going to work on our capability to integrate that type of information feed … and then use that to inform command decision-making, pass that information down to the units that are going to be actually executing the operation and using it,” Banning said. “It’s just the challenge of figuring out how to make those connections most effectively and efficiently to help speed staff and commanders’ decision-making.”

“In the bilateral environment, we’re going to be working on sharing those information feeds with our Australian counterparts so we can increase the speed of our ability to operate in a bilateral environment,” he said. “We’re really looking forward to maximizing this capability down here.”

This year’s deployment will involve training at Kangaroo Flats and Mount Bundey training areas near Darwin but won’t include time at sea. Officials nixed what would have been the deployment of an ADF dock landing ship. “That was the plan, up until the COVID situation,” Dowrie said. Marines would have embarked it for the Rim of the Pacific (RIMPAC) 2020 exercise in Hawaii, which U.S. Pacific Fleet has since scaled down due to the pandemic.

“We’re already planning for next year’s rotation,” Banning noted, “and making sure the things we planned on doing and weren’t able to get to this year because of those changes are included in the next year’s plan. so that we’ll stay where we need to be in our overall, longer-term plan.”

The MRF-Darwin rotations have helped the ADF continue to build its amphibious capabilities.

“The (Royal Australian) Army is re-rolling certain elements to be able to undertake amphibious operations, particularly off our two recently acquired landing helicopter docks, the HMAS Canberra and the HMA Adelaide,” Dowrie said. “That has been a journey that the U.S. Marine Corps and the MRF-D, in particular, have enabled,” he added, noting recent years’ training included shipboard operations “to help us under that transformation.”

“We’ll have to have a lot of elements of our Army come to the understanding of how to operate off of ships, so that’s a work in progress,” he said. “The Australian Defence Force is moving through – like the U.S. military is – the need to review its force structure and its design to be able to meet current military challenges but also foreseeable military challenges.” 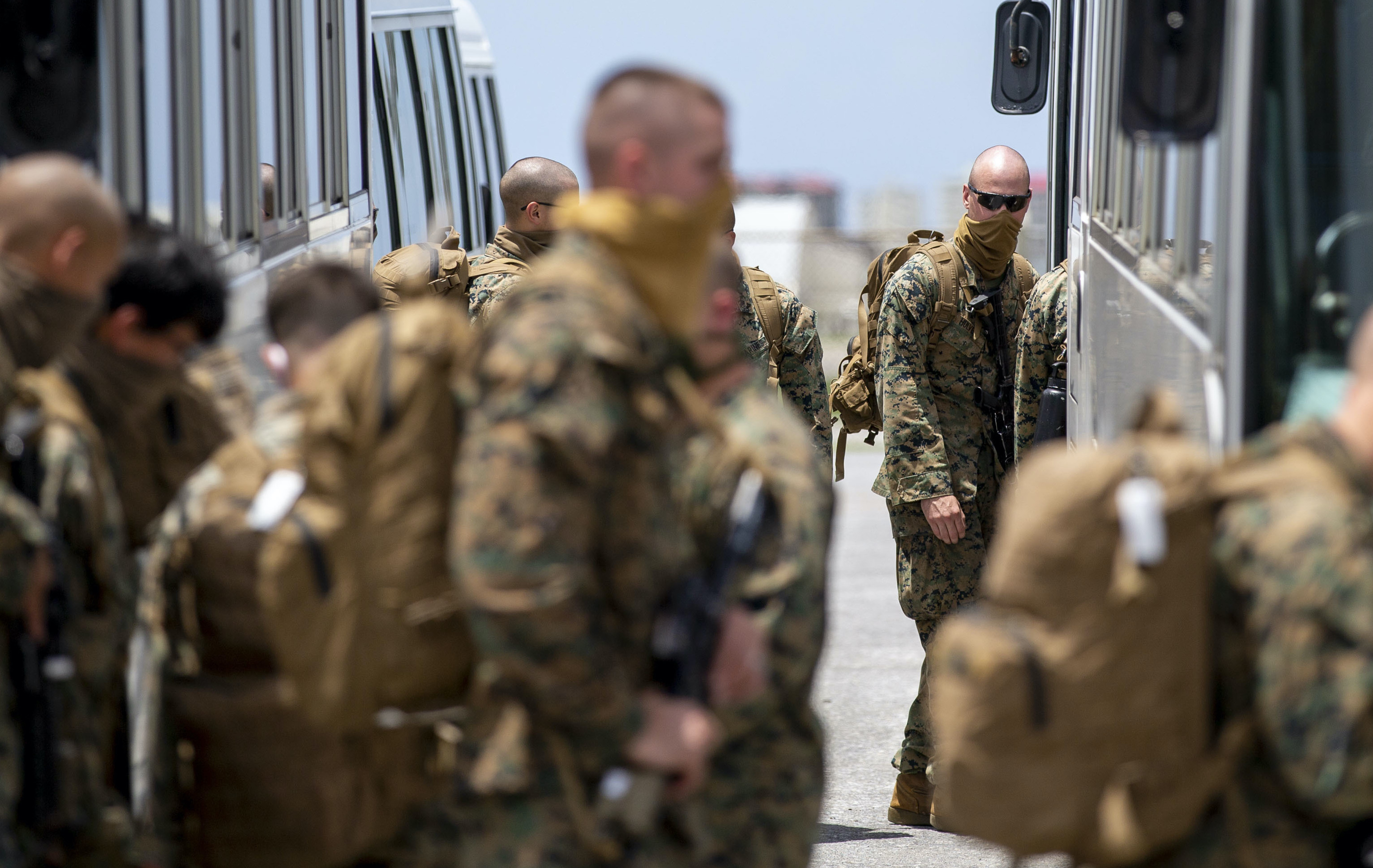 U.S. Marines with 3rd Battalion, 7th Marine Regiment load buses at Kadena Air Base, Okinawa, Japan, May 15, 2020. The battalion arrived from California and were screened for COVID-19 symptoms. They will join Marine Rotational Force – Darwin on an upcoming deployment to Australia’s Northern Territory. US Marine Corps Photo

Marines will spend a month or two doing small-unit training exercises, some with ADF units, “to make sure that we have done all of the background work to be able to operate successfully at a MAGTF level,” Banning said. In early September, exercise Koolendong “is going to demonstrate and validate a lot of the interoperability goals that we have … particularly on the command-and-control, fire support coordination, aviation planning. These are all things we are going to be focused very, very heavily on.”

The Northern Territory is the proving ground to test out those concepts and tactics. “The training areas out here are very dispersed,” he said, “so the principle between deploying a force to a remote set of islands somewhere or deploying them to a remote training objective or remote training area inland is a very, very similar problem set. This is going to give us a great opportunity to continue to advance those issues.”

Dowrie, a veteran pilot who previously served as RAAF liaison to U.S. Pacific Air Forces, recalled how last year, Marines and ADF soldiers “sat down and figured out, at the most junior levels, how to actually work around a problem we had in terms of our guns being able to talk together. The outcome of that innovation from those young soldiers and Marines we were able to, for the first time, be able to coordinate those gun lines to a high degree of efficiency in a fast fire support coordination exercise.”

“The journey of the MRF-D, year on year, has been great to watch,” he added. 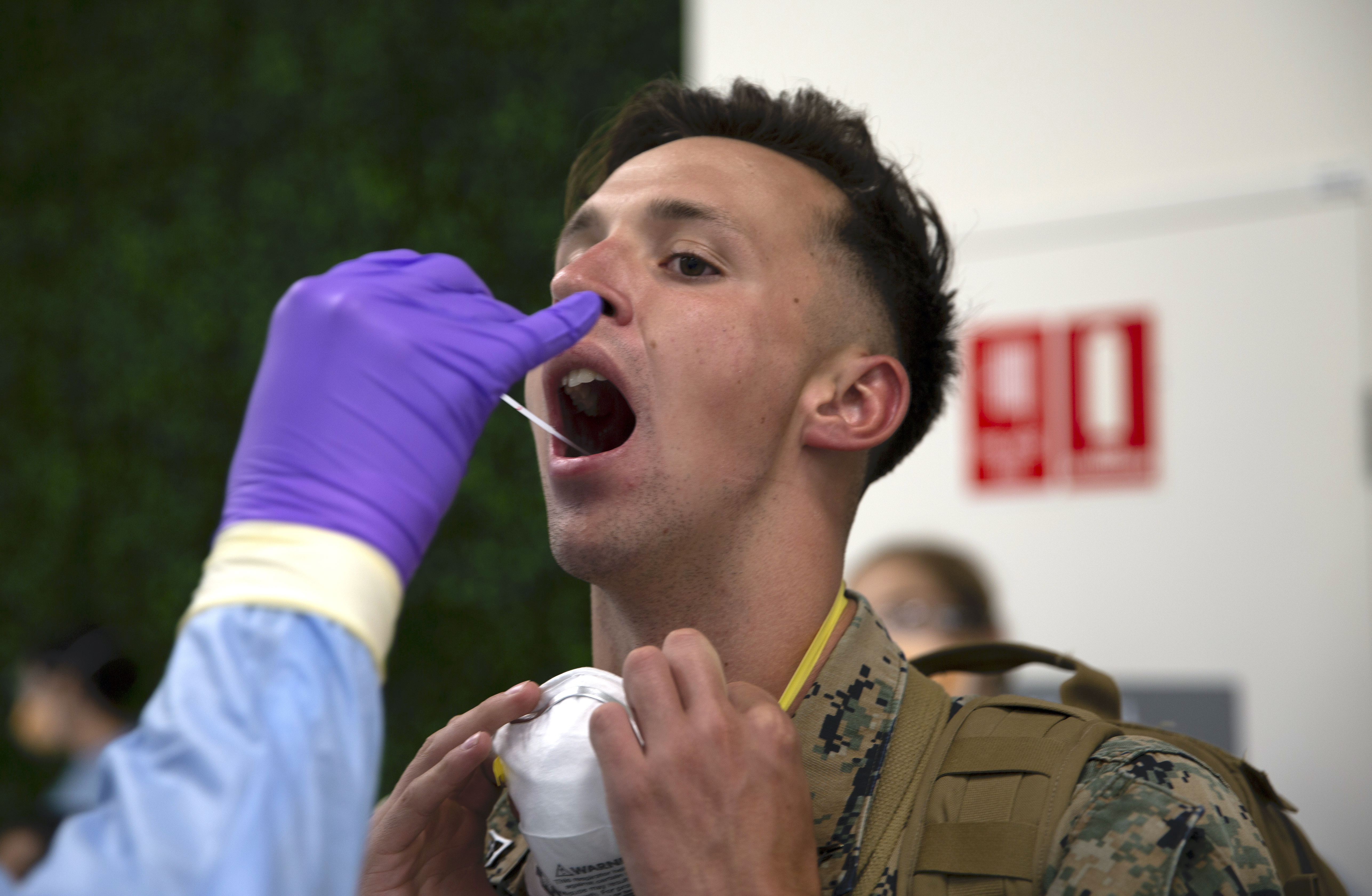 Before they left for Australia, each Marine and sailor with MRF-Darwin was screened with questionnaires and temperature checks. They are re-screened by Australian health teams in Darwin.

“One hundred percent of the force was tested,” Banning said, and everyone got a kit of protective equipment, including mask and gloves. “Knock on wood, we’ve had nobody test positive for COVID, so far, and all the protocols seem to be very effective.”

Marines are retested at the quarantine end, and if tests are negative, they’re released from quarantine and taken to their billeted facilities, he said. Contracted crews have cleaned and sanitized those facilities for the second wave of Marines, as “we actually have people flowing in as we speak right now.”

Banning said MRF-Darwin had beefed up medical capabilities before the pandemic, and “we made some adjustments to the plan, to make sure we had a COVID monitoring and response capability kind of embedded within that.” On Wednesday, MRF-Darwin’s medical teams had met up with their Australian counterparts and joint health command and the Northern Territory’s Center for Disease Control, Dowrie said, “to have a discussion and talk about how they can all work together,” not just for COVID-19.