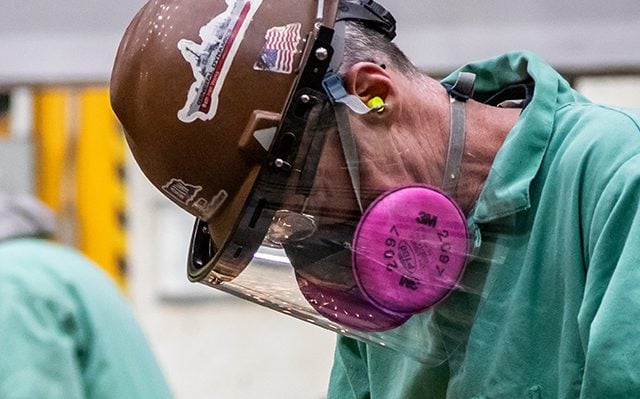 The unionized workforce at General Dynamics Bath Iron Works began its strike today, further delaying work on two destroyer programs when many of the issues the yard and the local union are fighting over are actually related to shipbuilding delays and trying to dig out of a backlog of work.

Though the Local S6 chapter of the International Association of Machinists and Aerospace Workers cited concerns over more traditional pay and benefits issues, too, the crux of the disagreement seems to be around the Maine yard’s use of subcontractors to supplement the union shipbuilders and mechanisms to get the right number of bodies doing the most needed work, even if it’s outside of their primary job or skillset.

“A mechanic may be assigned to do any of the efficiency tasks (22 of them) in the course of his/her ‘core trades work’ to make ‘work’ more efficient,” reads a June 15 union summary sheet.
“You could be doing work normally performed by another trade for eight (8) hours every day, including overtime,” the document warns, adding that “this basically creates ‘shipyard mechanics’” that reduce opportunity for overtime, reduce the need for manning overall and mess with seniority opportunities for overtime, shift selection, opportunities like participating in sea trials and more.

For BIW’s part, though, the company stated in a June 9 letter that it needs flexibility to put the right people on the right work, and that an inability to do that has forced the yard to lay people off instead of allowing them to do other work that could have been helping the yard catch up on its backlog.

The yard argues these kinds of measures to catch up on its workload would make the yard more competitive for future work – which the yard is struggling to secure, after losing the last major competitions it’s entered.

BIW states that “the shipyard has continued to focus on common sense changes to legacy work-rules that restrict the company’s ability to efficiently assign employees with the right skills where they are needed. The company has also proposed changes that attempt to solve for unpredictable attendance on overtime shifts and limited availability of a few critical skill areas that disrupt the flow of work in the shipyard. For example, because of a lack of advance notice, the current process does not provide adequate time for the company to schedule replacements to cover a number of absences among small, but critical, groups of employees.”

“Smart changes to existing rules also will help the shipyard improve employment stability and avoid unnecessary layoffs as workers in one area wait for work progressing from other stages of construction. For example, in 2018 – under the current contract – Bath Iron Works was forced to implement three unnecessary layoffs because of restrictions within the current bargaining agreement while there was existing work for employees to voluntarily do in another area of the shipyard,” the BIW letter continues.
“These and other factors continue to drag operations behind schedule, which was a major factor in the Navy’s recent decision to award a new shipbuilding contract, FFG(X) to a competing shipyard in Wisconsin.”

Additionally, the union complained in its summary sheet that BIW “will have a right to bring subcontractors in whenever they want; they will be stealing your work; (BIW) can choose to shut down a specific machine and choose to subcontract it out; … they can have layoffs in every production trade and still have subcontractors in our shipyard.”

BIW counters that it is hiring to fill union jobs as fast as it can but that sometimes other workers are needed to supplement that workforce – sometimes in critical shipbuilding skills in short supply at the yard, and sometimes for non-shipbuilding jobs like capital improvements at the yard and even shoveling snow.

“There are limits to the number of people we can bring in and effectively train simultaneously. In the meantime, there is work to be done. Sometimes we face a temporary shortage of a specific skill. Other times we simply need more arms and legs to get the job done. Subcontracting is one temporary way to directly plug critical skill shortages or to free our own shipbuilders from non-production tasks like shoveling snow. We need efficient access to both,” according to a BIW fact sheet on subcontractors.
“Today, Local S6 represents more than 4,000 employees inside the shipyard. BIW engaged with the union to introduce subcontractors in production areas last year. After almost four months of talks, only about 50 people have been brought in on production work as subcontractors. The existing process even took three months before a local Maine contractor could be engaged to shovel snow allowing shipbuilders to continue building ships. We are seeking a more streamlined approach because the process is broken and we must be able to respond quickly to needs in one area before they ripple throughout the shipyard, causing further delays.”

In a June 11 letter to the local congressional delegation, BIW President Dirk Lesko wrote, “We value our people. … We prefer our own people and invest in them, spending in excess of $13,000,000 in training employees in 2019. Our own proposal restricts our ability to subcontract in a trade where people are on layoff. We continue to hire. BIW hired more than 1,500 employees into represented areas of the shipyard in the last year and we are trying to hire 1,000 more. There are times, however, when the work in the shipyard exceeds the capacity of our workforce and additional help is required. This was a point communicated to both of you directly by Rear Adm. William Galinis” – then the program executive officer for ships, now the head of the Naval Sea Systems Command – who “noted that the other shipyards with which the Navy does business, our competitors, regularly use subcontractors to address shortfalls in skilled labor or to overcome schedule challenges.”

“We have the right to subcontract today. Subcontracting is not part of a broader plan to shift work normally done by BIW employees away from the bargaining unit on a permanent basis,” Lesko’s letter to the lawmakers continues.
“We seek only efficient access to all available resources to improve our ability to deliver to the U.S. Navy on time. Restrictive and archaic language in our current collective bargaining agreement has left us with idle workers and periodic layoffs at times when we have more than enough work for those employees in other areas. The contractual process is broken in this regard.”

Despite the yard’s needs to get the right workers at the right place at the right time to get destroyers through the construction process and delivered to the Navy, the yard’s proposal to the union was rejected by the negotiating committee last week and then rejected in a full member vote, with 87.34 percent opting to strike, according to the Local S6 Facebook page.

The Local S6 negotiating committee wrote in a June 18 letter that they would get back to negotiating with the company as soon as BIW approached them with a better path forward. But the signatories made clear they did not think they were dealing with a fair player, accusing Lesko of misleading the Maine state lawmakers and using the media to “spread fictitious versions of the truth.”

“We believe for BIW, to tell the truth, is almost as difficult as getting BIW’s management team to build as hip on schedule. The last time BIW built a ship on schedule, this ringleader and his circus of clowns were not the decision-makers. We believe this alone speaks volumes on the current state of affairs. … The Union’s opinion is that if BIW’s President spent more time on correcting his managerial staff, and less time on Union busting, we would be more proficient at building ships.”