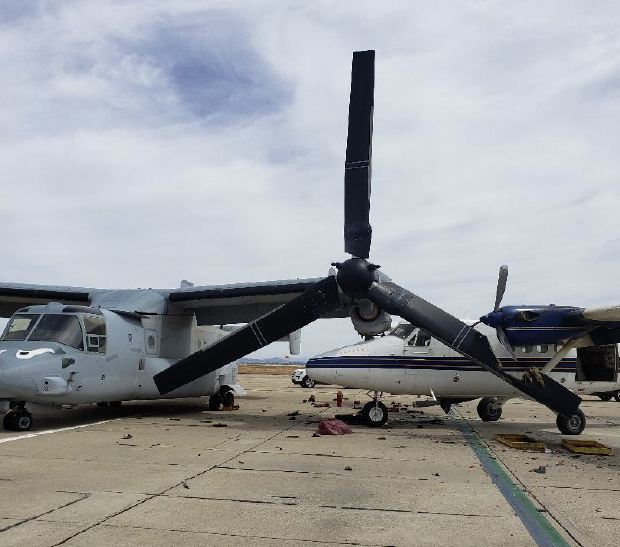 Marine MV-22B Osprey after being struck by a Twin Otter skydiving plane on May 30, 2020. City of San Diego Photo obtained by USNI News

SAN DIEGO, Calif. – A civilian Twin Otter airplane rolled and crashed into a Marine Corps MV-22B Osprey parked on a ramp at an airfield and caused extensive damage to both aircraft, according to officials and an incident report.

No one was injured in the May 30 mishap at Brown Field Municipal Airport, a San Diego city-run general aviation facility near the U.S.-Mexico border.

The Marine Corps is investigating the incident, which involved an Osprey belonging to Marine Medium Tiltrotor Squadron (VMM) 163, based at Miramar Marine Corps Air Station in San Diego. Marines had been conducting routine training in the area and had parked the Osprey at the airfield. “No Marines were present at the time of the mishap,” 3rd Marine Aircraft Wing officials said in a statement to USNI News.

The Marine Corps classified it as a “Class A” mishap, meaning the estimated damage is at least $2 million. The Osprey suffered damage mostly on its left side, to the engine compartment, wing and landing gear, as well as to both the left and right propellers, according to an incident report compiled by the city of San Diego.

The Federal Aviation Administration is investigating the incident and “likely will take a few weeks to complete,” spokesman Ian Gregor said Thursday. The National Transportation Safety Board initially looked into the mishap, but the agency is not investigating because it didn’t involve “an incident of flight,” spokesman Peter Knudson said.

The Twin Otter airplane – a 1967 De Havilland DHC-6-100, tail number N52FW – is registered to Kapowsin Air Sports, according to FAA records. The twin-engine plane, which carries two pilots and up to 22 passengers, is operated by Kapowsin, a skydiving center based in Shelton, Wash.

The Twin Otter arrived at Brown Field on May 8 after a short hop from a small private airstrip in nearby Otay Lakes, Calif., according to the live flight tracking website FlightAware.

The airplane, which Kapowsin leases for use by Skydive San Diego, recently “was under a routine maintenance program” and was going to be moved to another airstrip for skydiving operations, Jessie Farrington, a veteran skydiver and co-owner of Kapowsin Air Sports, said Thursday. “That shop had been doing all of the maintenance on that airplane for four or five months.”

Farrington declined to comment on what happened, adding, “we are just waiting for release of everyone’s findings.”

Jorge Rubio, San Diego’s deputy director for airports, told USNI News that “we had staff on the field and we responded. The situation was contained.”

An incident report compiled by San Diego provided details about the collision.

According to the report, pilot Christopher Sanders “was picking up the Twin Otter” to fly it to a nearby airstrip for skydiving operations after a maintenance crew “worked on the aircraft the last two weeks on several issues.” 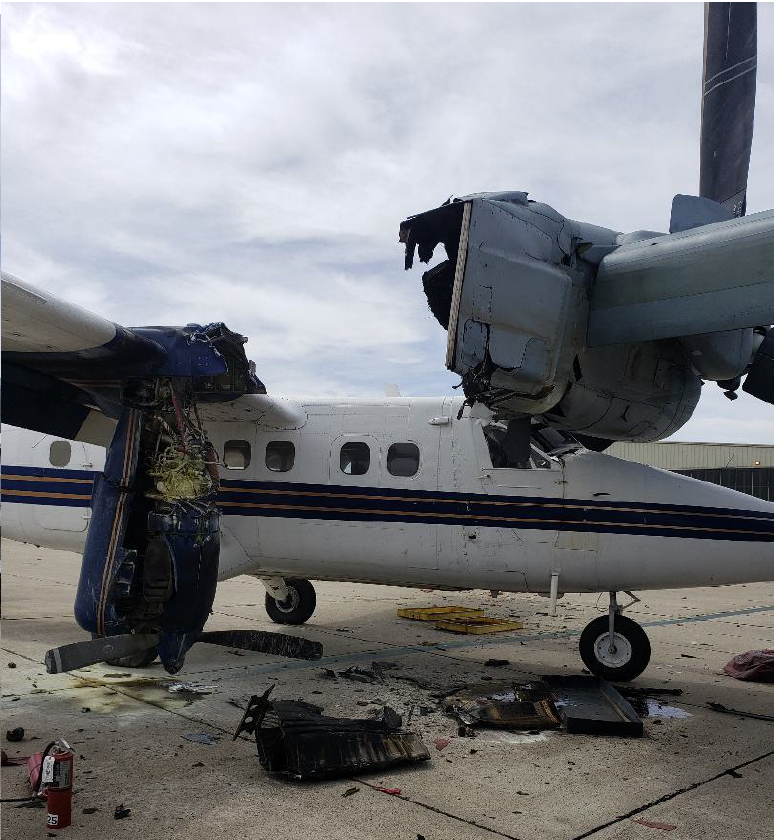 Marine MV-22B Osprey after being struck by a Twin Otter skydiving plane on May 30, 2020. City of San Diego Photo obtained by USNI News

“The maintenance service sheet was still in the aircraft,” the report continued, and a maintenance worker “released the aircraft. Right engine was turned on first and there were no issues. Left engine also started without incident. Then the aircraft began to roll forward. Mr. Sanders checked the parking brake, and pressed on the brakes and the brakes were not responsive. Mr. Sanders pulled back power as the aircraft moved to left and impacted the Osprey.”

According to the incident report, two airport employees who were conducting a ramp inspection nearby responded to the scene, using fire extinguishers and checking for leaks and debris that could damage other aircraft.

Rubio said the Twin Otter was “under power” at the time but declined further comment, citing the ongoing investigations.

“Aviation in general is very safe,” he said, noting procedures and measures are in place to ensure safe operations and “maintain our aircraft separation.” During ground operations – such as when aircraft are getting inspected or maintenance – “it’s basically up to the person in command to keep that aircraft separation,” he added.