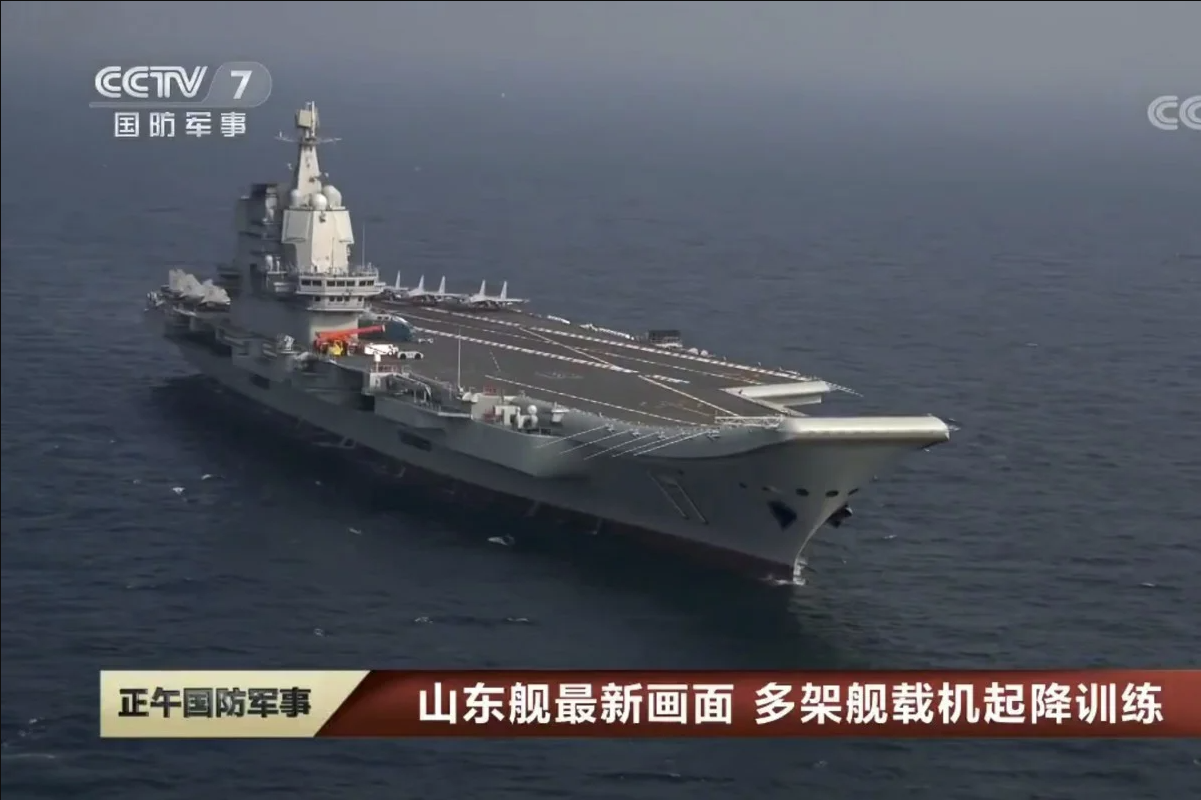 China’s newest aircraft carrier, Type 001A Shandong (Hull 17), is conducting sea trials at a time Beijing’s military leadership criticizes the pace and scope of U.S. Navy operations in the region.

Shandong departed the Dalian Shipyard on May 25 to test the ship’s weapons and equipment, to train crew members and enhance the carrier’s ability to conduct missions, Senior Col. Ren Guoqiang, a spokesman for China’s Ministry of National Defense, confirmed on Friday during a media briefing.

Footage of Shandong, released by the ministry, shows the carrier launching and recovering Shenyang J-15 fighters. Shandong is China’s People’s Liberation Army Navy’s second aircraft carrier, but the first one built domestically. China’s other carrier is Liaoning, which was initially built by the Soviet Union. China spent years refitting the carrier before putting it into service in 2012.

“The PLA Navy is conducting sea trials and training exercises for aircraft carrier Shandong in accordance with the annual training plan,” Ren said.

The carrier was reported operating in the northern region of the Yellow Sea, according to an account in The South China Morning Post, which first reported Shandong’s sea trials.

China started constructing Shandong in November 2013 at Dalian Shipbuilding, a subsidiary of China State Shipbuilding Corp, according to China’s Ministry of National Defense. Shandong has a displacement of at least 49,000 tons and a conventional propulsion system.

In comparison, two nuclear reactors power each of the U.S. Navy’s new Ford-class carriers, which have displacements of 100,000 tons.

Shandong left for sea trials just days after the White House released a report criticizing China’s expanding use of economic and military power to coerce nations to adopt China’s world view. The report, United States Strategic Approach to the People’s Republic of China, was released on May 20 and was required by the National Defense Authorization Act of 2019.

“Beijing contradicts its rhetoric and flouts its commitments to its neighbors by engaging in provocative and coercive military and paramilitary activities in the Yellow Sea, the East and South China Seas, the Taiwan Strait, and Sino-Indian border areas,” the White House report states.

“The current situation in the South China Sea is generally stable. The United States sent warships and aircraft to the South China Sea to carry out the so-called freedom of navigation operations to conduct close-in reconnaissance against China’s islands and reefs and hold targeted military exercises. These operations are the real drivers for militarization of the South China Sea. China urges the U.S. side to respect the efforts made by the countries in the region to safeguard peace and stability in the South China Sea and make more positive and constructive efforts,” Ren said, according to the briefing’s English language transcript released by the ministry.

China sent Shandong through the Taiwan Strait in December, shortly after its commissioning and just weeks before Taiwan’s presidential election. At the time, Taiwan’s President Tsai Ing-wen, from the pro-independence Democratic Progressive Party, was vying for re-election. She won the election with a comfortable margin.