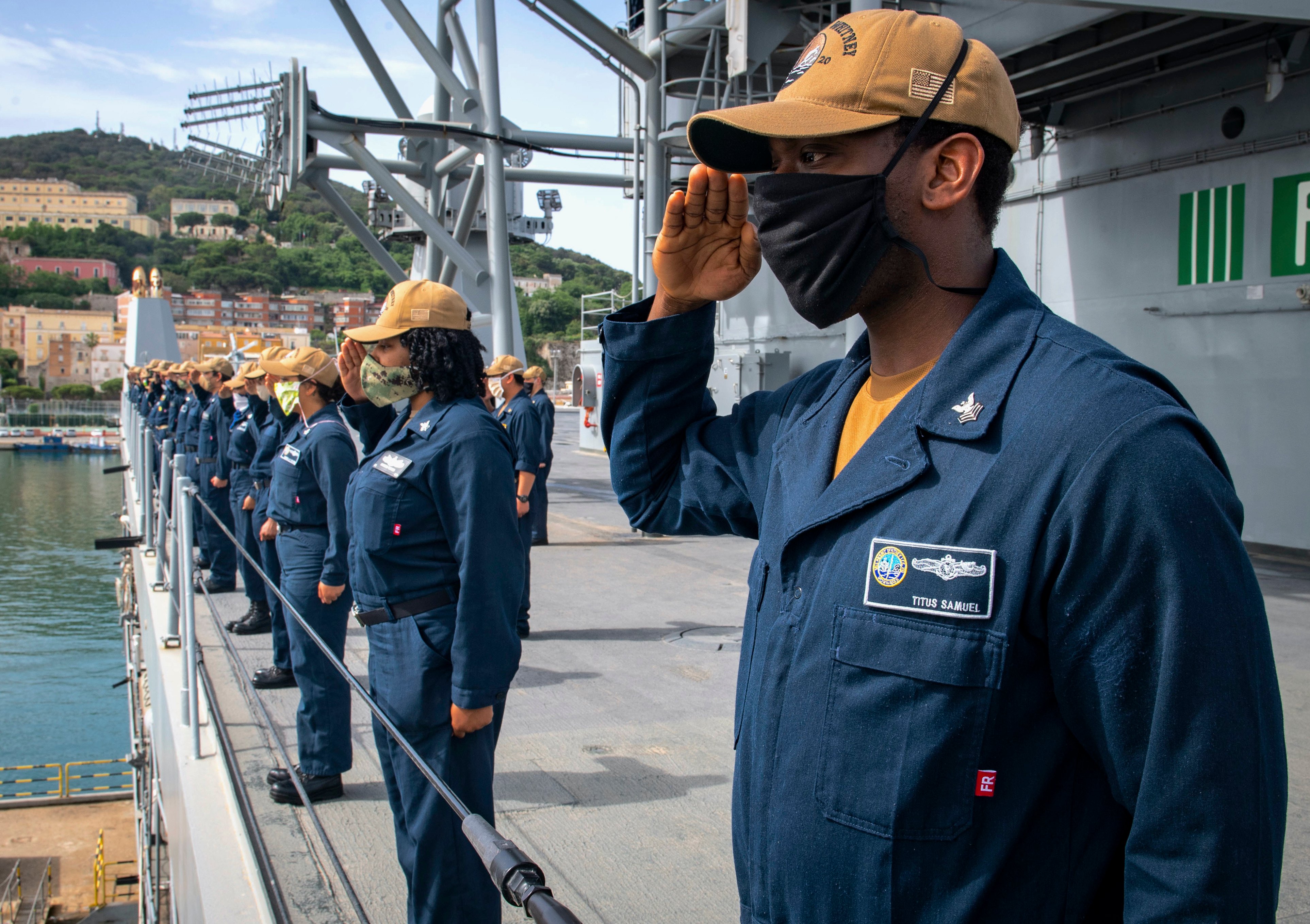 Naval operations are proceeding unimpeded by the COVID-19 pandemic, top leaders say, but there could be readiness challenges next year if the virus continues to affect the output at maintenance depots and at the suppliers who make spare parts.

Chief of Naval Operations Adm. Mike Gilday said today that current operational plans were written by the joint force 18 months ago “uninformed by COVID math” and that the Navy would find a way to meet its obligations. In fact, he said, the service has about 15 percent more underway assets today than its normal operating pattern in recent years, with more than 100 ships and submarines at sea today – including seven aircraft carriers and two amphibious ready groups (ARGs).

Citing recent increased presence and operations with allies and partners in the South China Sea, the Persian Gulf and the Barents Sea, Gilday said, “we want to basically show that COVID is not going to affect us in terms of being able to pivot where we need to be, when we need to be there.” 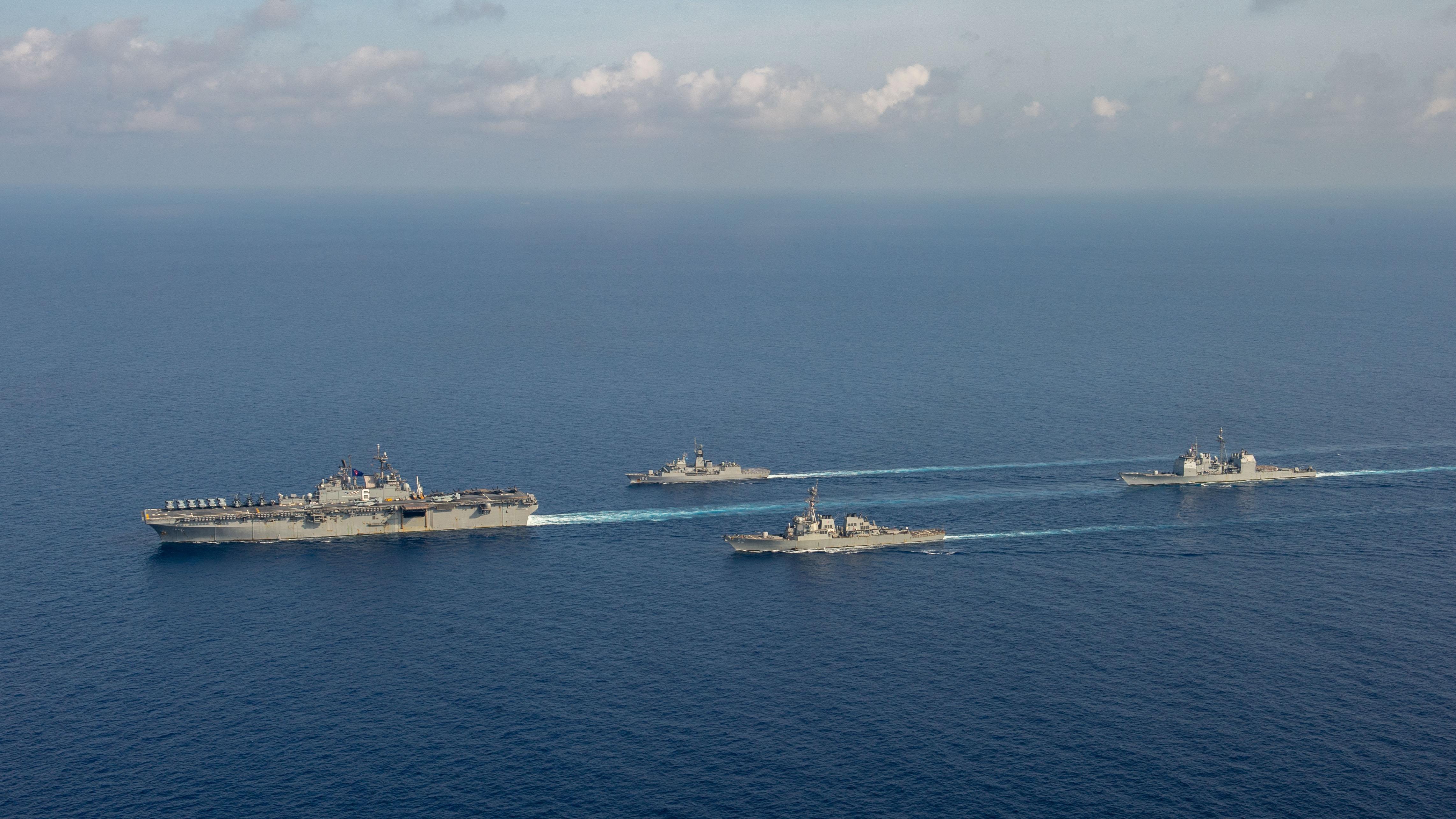 Still, “we are both looking into ‘21 and ‘22 in terms of force generation, and so all the things that have to be in place with respect to manning, training and equipping the fleet to meet the secretary of defense’s requirements out though ‘21 and into ’22. We’re beginning to look at that based on what we’ve experienced so far with COVID impacts with the industrial base, and to begin to make some projections – as well as pulling on some levers, including things like overtime at shipyards, including bringing back some reservists into the shipyards, in order to make sure we are at close to full capacity,” he said while on the phone with a small group of reporters this morning.

Gilday said the shipyards saw productivity drop to about 70 percent during March and April because many of the workers there are older and more vulnerable to the COVID-19 disease. The Navy and its industry partners were “conservative” in taking measures to protect workers’ health, he said, but now workforce attendance is coming back up as yards implement measures to distance workers, disinfect spaces and otherwise prevent the spread of the disease. 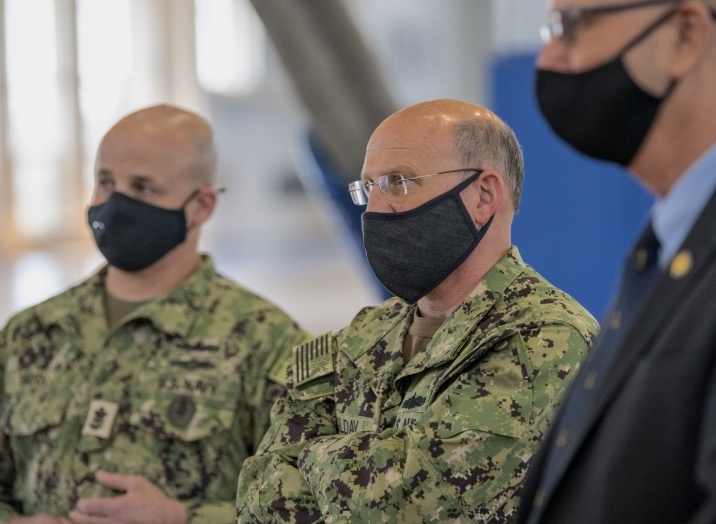 But, it’s unclear if the virus will peter out or if it will come back in subsequent waves.

Assistant Secretary of the Navy for Research, Development and Acquisition James Geurts told USNI News this week that “the challenge we’re going to have in this situation is just the impact will kind of depend on the severity, the length and the severity, and how it hits a little bit geographically. And so we’re running, I would say, a couple of different models depending on, do we largely get to a steady state kind of operation here say by the end of May and into June, or is it going to be one that is going to have some follow-on periods of disruption?”

Geurts added that the team at Naval Sea Systems Command (NAVSEA) “has done a really good job protecting the near-term availabilities” and that, as the workforce comes back up to full capacity, “now what we’re really looking at is prioritizing work downstream, understanding where we may have some flexibility, and then working closely with the fleet to align that.” 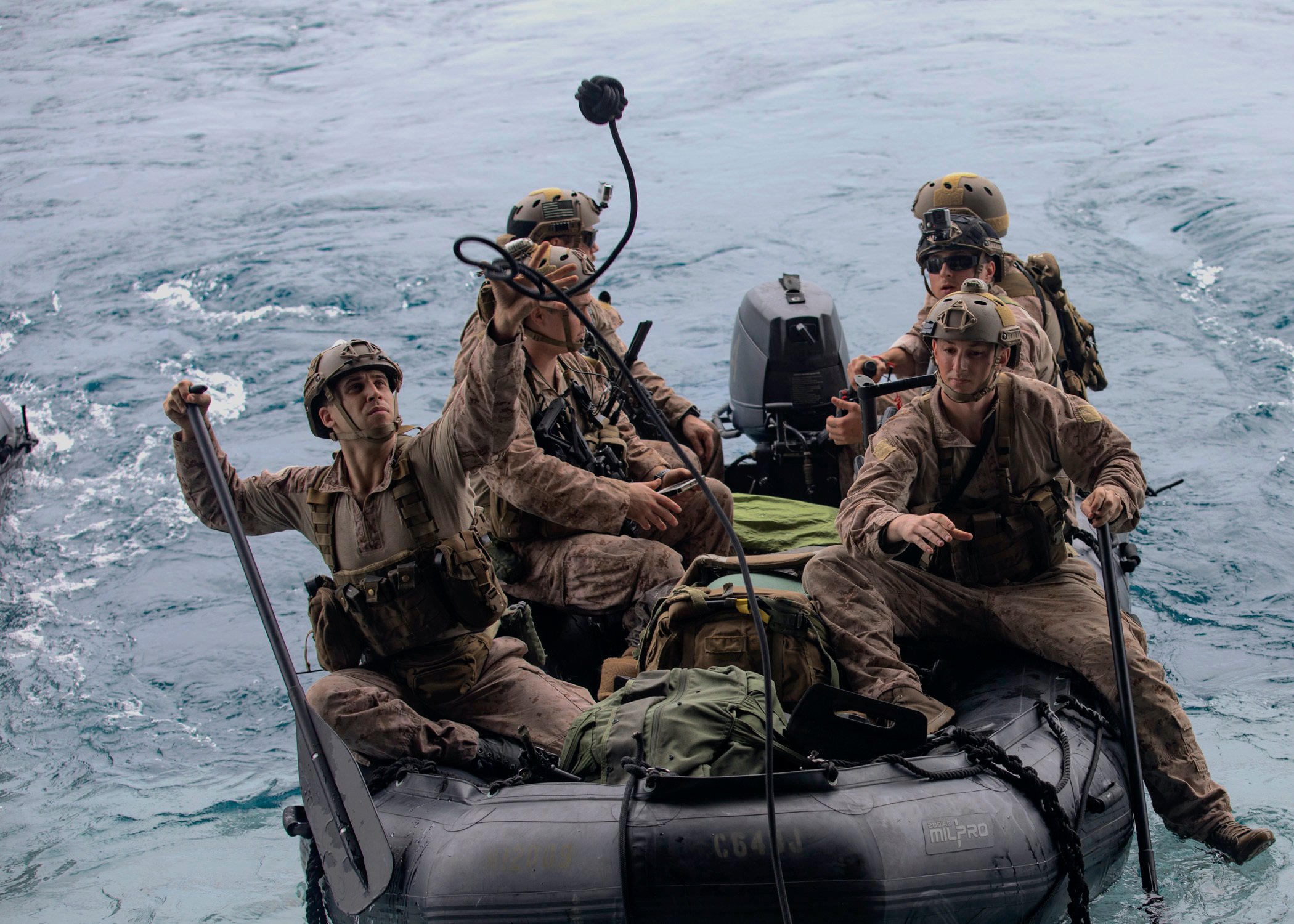 Gilday told USNI News that he was eyeing 14 CNO availabilities or major work periods on ships – looking at what work remains on those ships compared to shipyard capacity based on workforce attendance, and then coming up with plans to de-scope work that can be postponed with acceptable risk, or prioritizing work that must get done as a precursor to other work in the availability.

“Based on what we’ve seen so far this year with COVID, we are beginning to take a look at how that bow wave of potential delays might impact in ‘21, and then how do we prioritize nuclear-powered ships, strike groups, ARGs, SSNs, SSBNs – we want to make sure we get the prioritization right so that we can optimize those ships and their path through the shipyards, through the maintenance cycle and back out” into the fleet for operations, the admiral said.

Commandant of the Marine Corps Gen. David Berger said during the call that his service is facing a similar prospect.

“The impact to maintenance efforts this summer, for example like the depot work where weapons systems and vehicles and aircraft are sent for major maintenance – is there an impact? Yes, there is, because of the reduced” workforce productivity, he said.

“So is there an impact this summer? There is. Can we adjust training accordingly? We cannot, but we will factor that in in terms of where the flow of machinery is and equipment is through those depots. That will have an impact probably late this summer, this fall. That’s the near term. The long term, as the CNO hinted at, perhaps six, 12 months down the line, this is where the supply chain impacts come into play, because right now all those parts that would have been produced this summer for maintenance we’re going to need next summer are going to have an impact. So we need to work hard to try to forecast what those critical elements are, where we might be short parts next year, next summer, for maintenance that we do. We’re using parts right now that are on the shelf, but by next summer all those parts will be used up – so this summer’s impact on the supply chain, I think we’ll feel six to 12 months into the future,” he continued.

Geurts said during his May 20 media call that “as we have gone through the crisis, we have not had to shut down any of our shipyards, both private or public, and as I look at the (COVID-19) case count we are having a relatively flat number of cases and more folks coming back than getting infected.”

At the supplier level, he said, a couple hundred companies of all sizes were temporarily shut down at some point over the last eight weeks, but like employees at repair yards, more are coming back online now than are shutting down due to COVID-19 infections.

He noted that the conversations between the maintenance community and the fleet operators would have to go both ways – just as the maintainers might have some delays due to worker absences or parts shortages, the fleet too is adjusting its operations due to the pandemic and may throw off some ship repair schedules. For instance, instead of coming straight home after its deployment to U.S. 5th and 6th fleets, the Harry S. Truman Carrier Strike Group has been loitering off the coast of Norfolk, Va., to avoid exposing the crew to the virus until another carrier strike group is certified for tasking in case of emergency. Geurts said decisions like that could also affect maintenance schedules and that close coordination between both communities would be important to get through this difficult time. 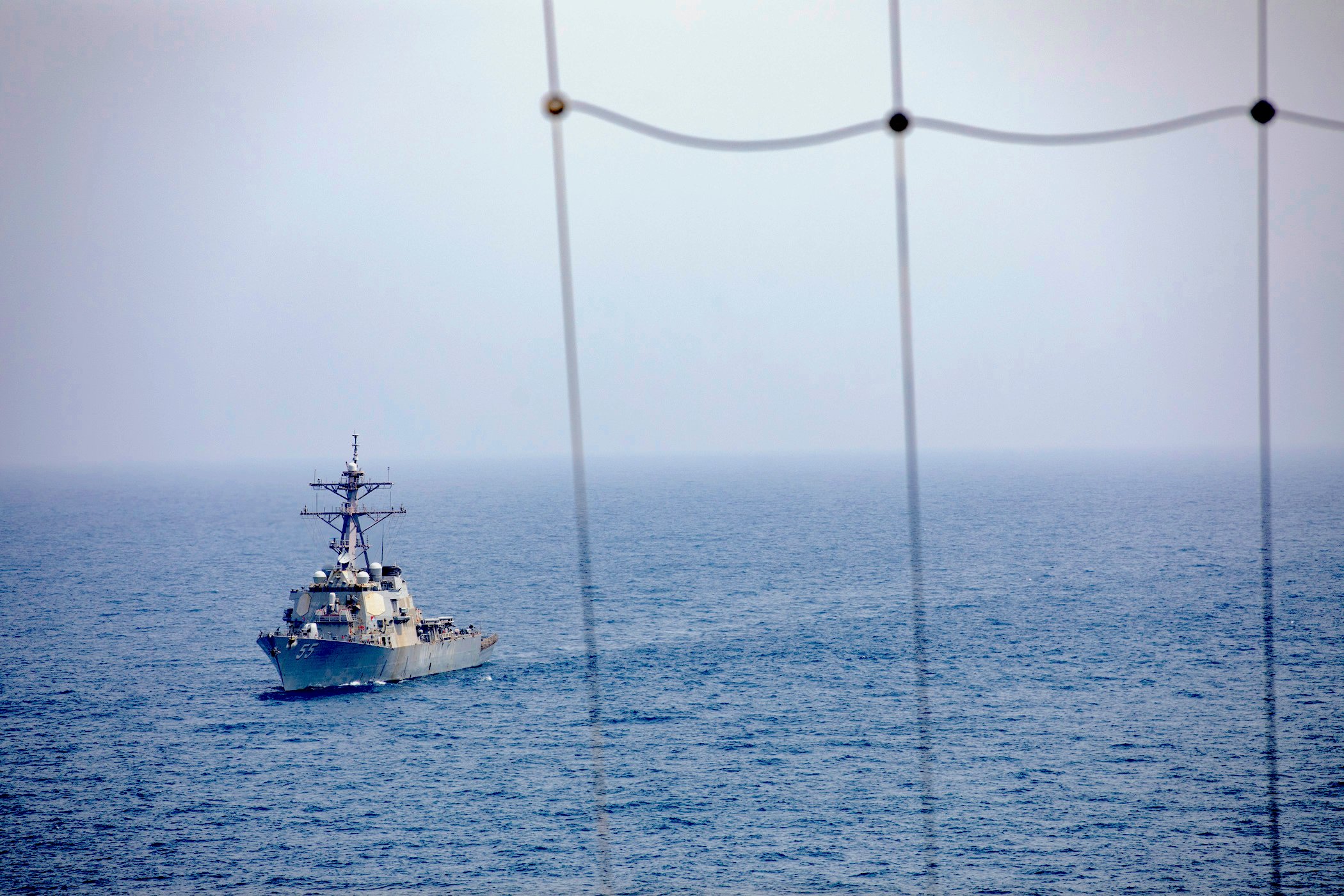 The COVID-19 pandemic in a way lays bare an ongoing struggle the services have had in recent history: balancing the need to preserve hard-fought-for readiness while also meeting Joint Force-tasked operational commitments.

Gilday said that, in the near term, the Navy would find a way to meet the commitments it’s been tasked well before the virus emerged. But, he said, the pandemic today will affect planning for 2021 and 2022 and may give additional considerations for planners to think about.

“We are having those discussions now so that we can plan better and set expectations better across the force,” he said.

Berger added that the joint force must be judged by its ability to do three things: how well can it deter aggression through presence? How well can it react to a disaster? And how prepared is it to take offensive action if called upon by the president? Berger noted that the military cannot sacrifice the last two capabilities, so routine presence operations must be de-emphasized under the National Defense Strategy instead of “running the machine so hard that we’re not in a position to react or not in a position to take action when we need to.”