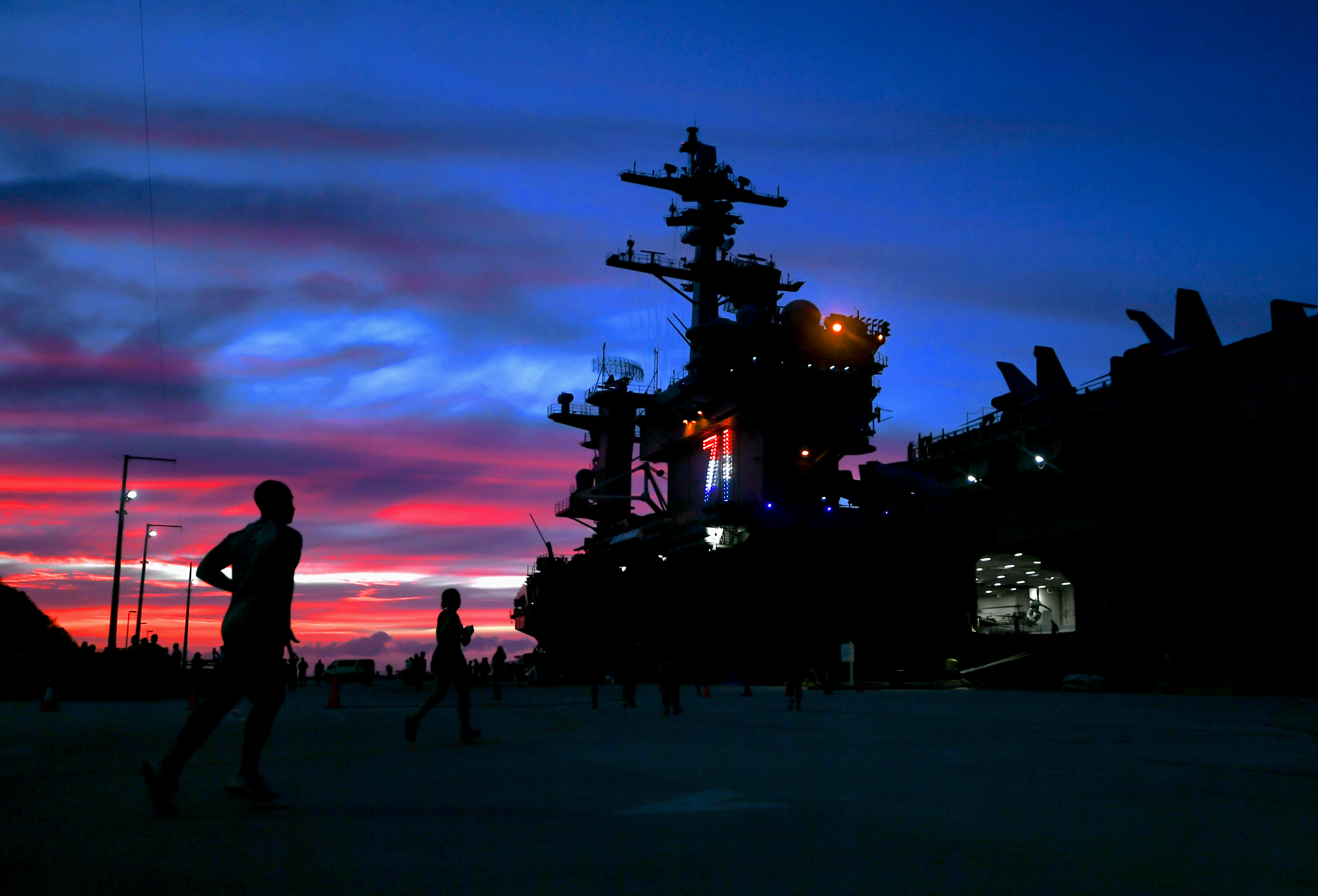 Sailors assigned to the aircraft carrier USS Theodore Roosevelt (CVN-71), run on the pier of Naval Base Guam, May 8, 2020. US Navy Photo

The five sailors were on the carrier after having already gone through a quarantine ashore and then a screening process that declared them safe to return. After 14 days in isolation on Guam, the sailors were required to test negative for the coronavirus twice before being allowed back onto the carrier, as part of the new procedures the Navy has put in place to screen sailors following the outbreak that has left the carrier sidelined in Guam since March 27. These five sailors reported influenza-like illness following their return to the carrier.

“While onboard, these five TR sailors self-monitored and adhered to the strict social distancing protocols established by the Navy,” reads a Navy statement provided to USNI News.
“The sailors were immediately removed from the ship and placed back in isolation, their close contacts were mapped, and they are receiving the required medical care.”

A Navy official told USNI News that contact tracing efforts identified 18 sailors who came in contact with the five sailors who tested positive for COVID-19, and they too were quickly removed from the ship. It’s unclear if the discovery of the cases will delay the return of the carrier to sea.

The cases are a setback for the service that has been developing methodology to purge its ships of COVID-19 outbreaks.

The Theodore Roosevelt outbreak resulted in more than a 1,000 positive cases of COVID-19 and forced the service to quickly craft procedures to keep its ships free of the virus. Since the initial discovery of the virus on the carrier, the Navy has kept port visits to the bare minimum across the deployed fleet and has sequestered sailors ahead of deployments for the Ronald Reagan and Nimitz Carrier Strike Groups.

To date, the only other deployed warship to suffer an outbreak is destroyer USS Kidd (DDG-100), currently pier-side in San Diego as the Navy works to purge the virus from the ship and the crew.

“If it gets on, it’s on the ship. And you can slow and arrest the spread, but at some point you start losing the battle, and that’s when you have to take more urgent and decisive action, and that’s what we did with Kidd,” Vice Adm. Richard Brown, the commander of Naval Surface Forces and Naval Surface Force Pacific, told USNI News in an interview earlier this month.
“If we had left her out there, I would say at some point the entire crew would have been infected in a number of weeks.”

On Monday, the Department of Defense Office of the Inspector General announced an evaluation into the Navy’s procedures to keep the virus off ships.

“The objective of this evaluation is to determine whether the Navy has implemented policies and procedures to prevent and mitigate the spread of infectious diseases, such as coronavirus-disease-2019 (COVID-19), on ships and submarines,” reads a Wednesday statement from a Pentagon spokesperson.
“In addition, we will determine whether mitigation measures that are effective in preventing the spread of COVID-19 were implemented across the fleet. We may revise the objective as the evaluation proceeds, and we will also consider suggestions from management for additional or revised objectives.”