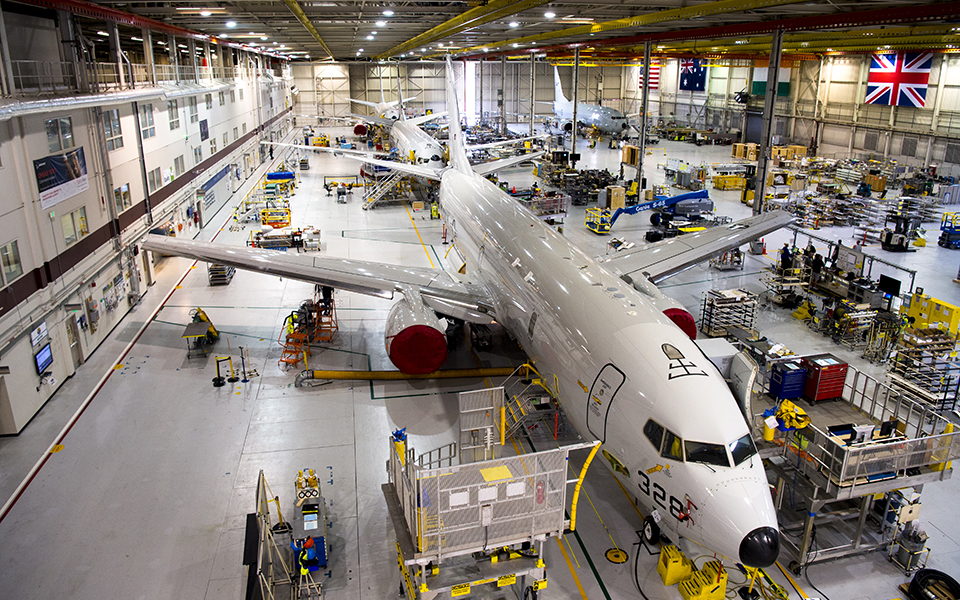 In the near term, Boeing’s leadership is counting on its defense programs to provide bottom-line stability as its commercial aircraft business buckles under pressure from COVID-19-related travel restrictions.

Commercial air traffic has all but ground to halt – down 95 percent in the U.S. from where it was a year ago – Dave Calhoun, the chief executive of Boeing, said during a Wednesday conference call with analysts to discuss the company’s first-quarter financial results. The airlines are dramatically cutting back services, grounding fleets, deferring airplane orders, postponing acceptance of new jets and even slowing down or stopping payments.

For Boeing, the global economic shutdown contributed to the company losing $1.35 billion from sales of $16.9 billion during the first three months of 2020. During the same time a year ago, Boeing earned $2.35 billion and on sales of $22.9 billion.

“Our government services, defense and space programs will provide critical stability for us moving forward,” Calhoun said. “In fact, our work in these areas accounted for 45 percent of our overall revenue in 2019. That will obviously increase in the year ahead.”

Boeing was already facing a severe financial climate while the global fleet of its 737 Max airliners remained grounded. The 737 Max aircraft were grounded after two deadly crashes in October 2018 and March 2019, killing a total of 346 people. Federal and international investigators linked the crashes to a flight control software called Maneuvering Characteristics Augmentation System or MCAS. Boeing suspended 737 Max production in January.

However, just two years ago Boeing’s commercial aircraft business was touted as being the company’s major breadwinner. Commercial jet sales provided Boeing the cash used to fund research and development projects that enabled the company to underbid rivals and land the Department of Defense contracts Calhoun now says will stabilize Boeing’s sales.

In 2018, the Navy awarded Boeing an $805-million contract to build the first four MQ-25 tankers. Earlier this month, the Navy exercised contract options with Boeing worth $84.7 million to buy three more MQ-25 tankers. Ultimately, the MQ-25 program could be worth $13 billion if the Navy follows through with plans to field a fleet of 72 Stingrays.

Also, in 2018, the Air Force awarded Boeing a $9.2 billion contract to build the T-7 Red Hawk trainers and a $2.38 billion contract for the fleet of Grey Wolf helicopters. Boeing underbid its competitors for these contracts because the company’s cash flow from operations allowed it to invest significant amounts of money into developing concepts before the contract awards, former Boeing Chief Executive Dennis Muilenburg said during an October 2018 conference call. Muilenburg resigned in December.

In February 2019, the Navy awarded Boeing $43 million to build four Orca XLUUVs. Boeing based its winning Orca design on its Echo Voyager unmanned diesel-electric submersible. The 51-foot-long Echo Voyager is launched from a pier and can operate autonomously while sailing up to 6,500 nautical miles without being connected to a manned mother ship, according to the Navy.

What’s not clear is how the current slowdown in Boeing’s commercial aircraft business will affect the company’s ability to continue funding research and develop programs. Boeing is planning to trim 10 percent of its total workforce of 160,000 employees. The company is also suspending dividend payments to shareholders and reducing non-critical spending.

“Reducing or deferring research and development and capital expenditures,” is part of this cost-cutting effort, Calhoun said. Boeing will continue spending on critical priorities and essential technologies to the company’s future, he added.

“We continue to see a healthy market with solid demand for our major platforms and programs, both domestically and internationally,” Calhoun said.