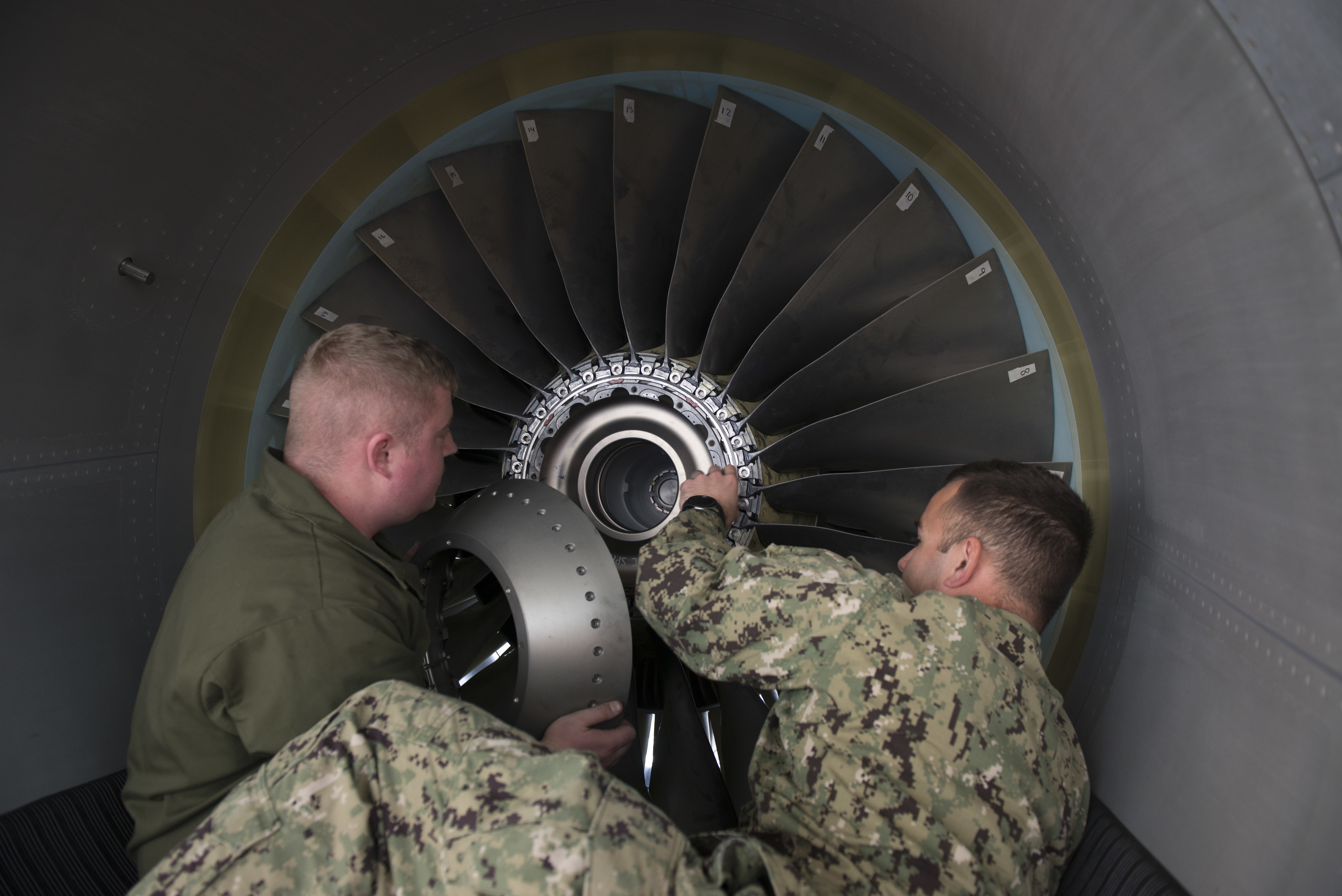 Aviation Machinist Mate 2nd Class Caleb Fisher, left, and Aviation Machinist Mate 1st Class Ricky Souza, both assigned to the Skinny Dragons of Patrol Squadron (VP) 4, install a spinner cone to the CFM56-7B engine of a squadron P-8A Poseidon aircraft as a part of a scheduled maintenance inspection on Feb. 4, 2020. US Navy photo.

The Navy is moving forward with its plans to take advantage of a commercial aviation slowdown by accelerating new orders, buying spare parts and conducting depot maintenance – all in conjunction with the other services, to get the maximum benefit of what the industry has to offer even while combating the COVID-19 pandemic.

Navy acquisition chief James Geurts told reporters today that, both because customers are avoiding commercial air travel and because aviation manufacturing sites are being hit by the coronavirus, “commercial aviation is still remarkably challenged, and remarkably important because we do get a lot of benefit in the DoD from commercial aviation sector, from those companies that work in both areas. So we’re working closely with them.”

Geurts had said two weeks ago that the Navy was early in the process of identifying what opportunities might exist to keep aviation-related production lines moving despite limited commercial demand, while also building up Navy readiness by boosting the inventory of spare parts or getting ahead of schedule on acquisition or maintenance efforts.

After Geurts made those remarks, his counterpart, Defense Department acquisition chief Ellen Lord, said that aviation was the hardest-hit sector in the defense industrial base due to the COVID-19 pandemic and response.

Today, asked what opportunity there was to get ahead on aviation acquisition and maintenance even amid the sector’s great disruptions, Geurts told USNI News during a media teleconference that the effort is moving forward and that aviation propulsion would be a key focus.

“We’re working closely with our partners in the other services so we have a whole-of-DoD approach to those companies in those efforts,” he said.

He added that his focus would be less about awarding new contracts and instead looking at rephasing or accelerating work, connecting companies with grants and loans they might not otherwise have access to, and more.

“We’re looking at the full tools we have available and then trying to rapidly tailor those tools and the right mix to each individual sector and each individual situation,” he said.
“I don’t see a giant DoD-level contract. I think it’s more about synchronizing efforts and working closely with my counterparts in the other services so that we’re working together to get the maximum benefit, and I think that’s more an alignment of strategies and tools than in a large new kind of joint contract.”

For example, the Navy is looking at construction programs where “we may not have planned to buy the engine for three months, but maybe we can buy it now and gain some efficiency.” 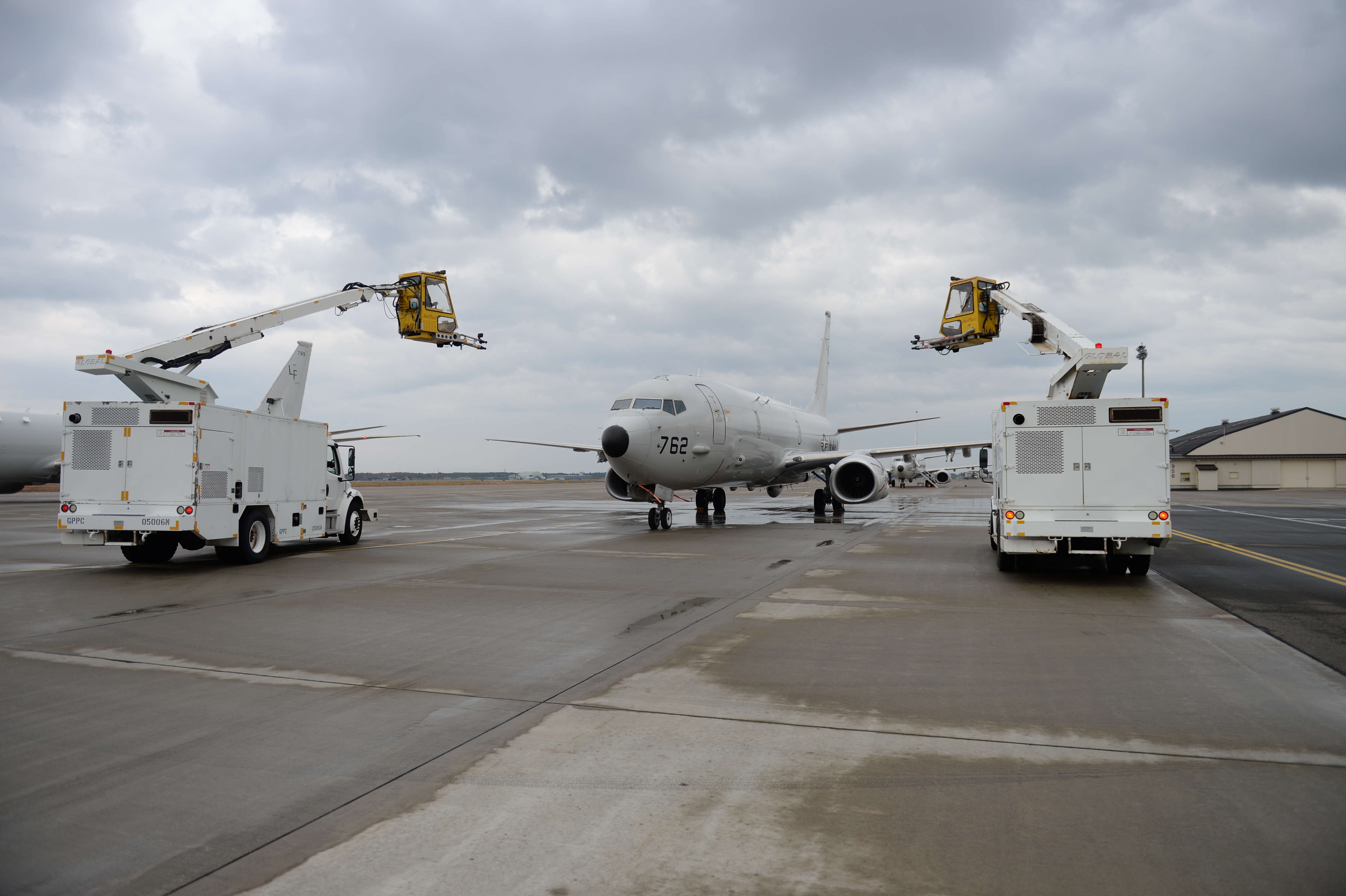 On programs like the P-8A Poseidon, a military version of the popular Boeing 737, the Navy could find money within the program to stock up on parts, or to leverage Boeing depot repair capabilities not being used by commercial planes.

“There will be a natural limitation of funding and whatnot, so we can’t do that infinitely, but we’re looking to leverage all the different toolsets we have,” Geurts said.

Outside the Navy budget, Geurts said the Navy has been trying to help its smaller suppliers get connected with the Small Business Administration to apply for loans so they can keep their production moving or even accelerate. And in the Navy’s own Small Business Innovative Research, the service has $250 million in awards that Geurts is trying to get out to industry as quickly as possible over the next couple months.

More broadly, Geurts said the Navy had already been taking a close look at its domestic and international supply chain and is in a good position now to be making informed decisions as the entire world faces disruptions from this pandemic.

In hard-hit Italy, for example, companies that make parts for the Marine Corps’ amphibious combat vehicle (ACV) – which BAE Systems builds in partnership with Italian defense contractor Iveco, which designed the vehicle for the Italian Navy – have had to shut down.

“Everybody is working very aggressively to manage around it,” Geurts said, adding “there’s nothing I would put in a crisis mode yet, we’re just keeping an eye on it.”

He said for ACV and other programs that rely on international suppliers, the program offices are looking to rephrase elements of construction to account for certain components being delayed, or may look at using spare parts for already-fielded vehicles to support construction. The latter move, though, would have to be done carefully to balance both production and sustainment needs, he said.