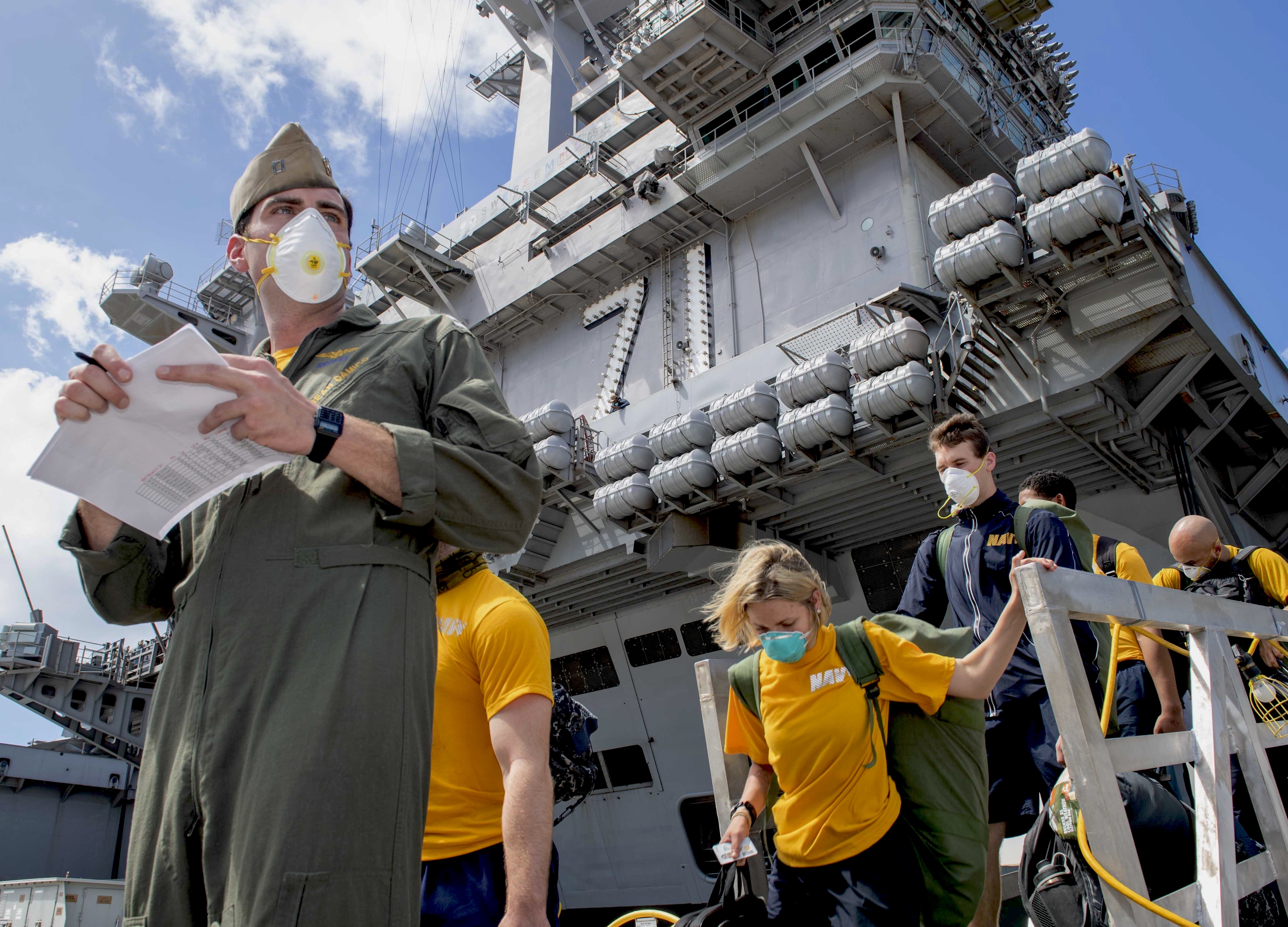 Sailors assigned to the aircraft carrier USS Theodore Roosevelt (CVN-71) depart the ship to move to off-ship berthing on April 10, 2020. US Navy Photo

To better refine how the Navy fights COVID-19, the service and the Center for Disease Control are mounting a study see how the virus spread aboard USS Theodore Roosevelt (CVN-71).

Starting Monday, the Navy is going to ask volunteers from Theodore Roosevelt for blood samples and swabs to begin a serology (pronounced: SIR-all-ah-gee) study into the outbreak on the carrier, Navy Surgeon General Rear Adm. Bruce Gillingham told reporters on Friday.

The serology tests will take the blood samples and look to see if a sailor developed antibodies for the virus.

“We’ll take anywhere from about five to seven days to collect those samples. Those samples will be then transported to the CDC in Atlanta and analyzed,” Gillingham said.
“Our goal is to try to complete that process in about a month or so.”

What the study isn’t going to answer is how the virus came aboard in the first place.

“We don’t know for sure how the virus got started,” Gillingham said.

He said the first cases aboard the carrier were discovered 15 days after Theodore Roosevelt’s port visit in March to Da Nang, Vietnam.

“We also know that those sailors were from the aircrew portion of the crew. It certainly suggests that it’s likely that it may have come aboard on the routine [Carrier Onboard Delivery] flights, the supply flights that come out to the ship,” he said. Later in the call with reporters, Gillingham downplayed the connection to the air wing as the source of the outbreak.

Two Navy officials told USNI News following the call that the first two positive cases found on the carrier were from members of Carrier Airwing 11 embarked on Theodore Roosevelt, not the two C-2A Greyhounds in the COD detachment from “the Providers” of Fleet Logistics Support Squadron 30 attached to the carrier. Unlike the embarked air wing, the C-2A detachment operates primarily from shore and follows the carrier on its deployment, basing itself at major airports to ferry mail and supplies. The third sailor aboard to have the virus was a member of the ship’s company.

Officials stressed to USNI News that, with the possible levels of asymptomatic transmissions the service is discovering as part of the outbreak, paired with the tight quarters of the carrier, there may be no way of knowing how the virus came aboard the ship.

The carrier has been pier-side at Guam since March 27 as the Navy has moved to test and isolate the crew in waves while also disinfecting the ship ahead of returning to sea.

“As of today, 94 percent of Theodore Roosevelt crewmembers have been tested for COVID-19, with 660 positive and 3,920 negative results,” according to Friday’s COVID-19 report from the service. “4,059 sailors have moved ashore.”