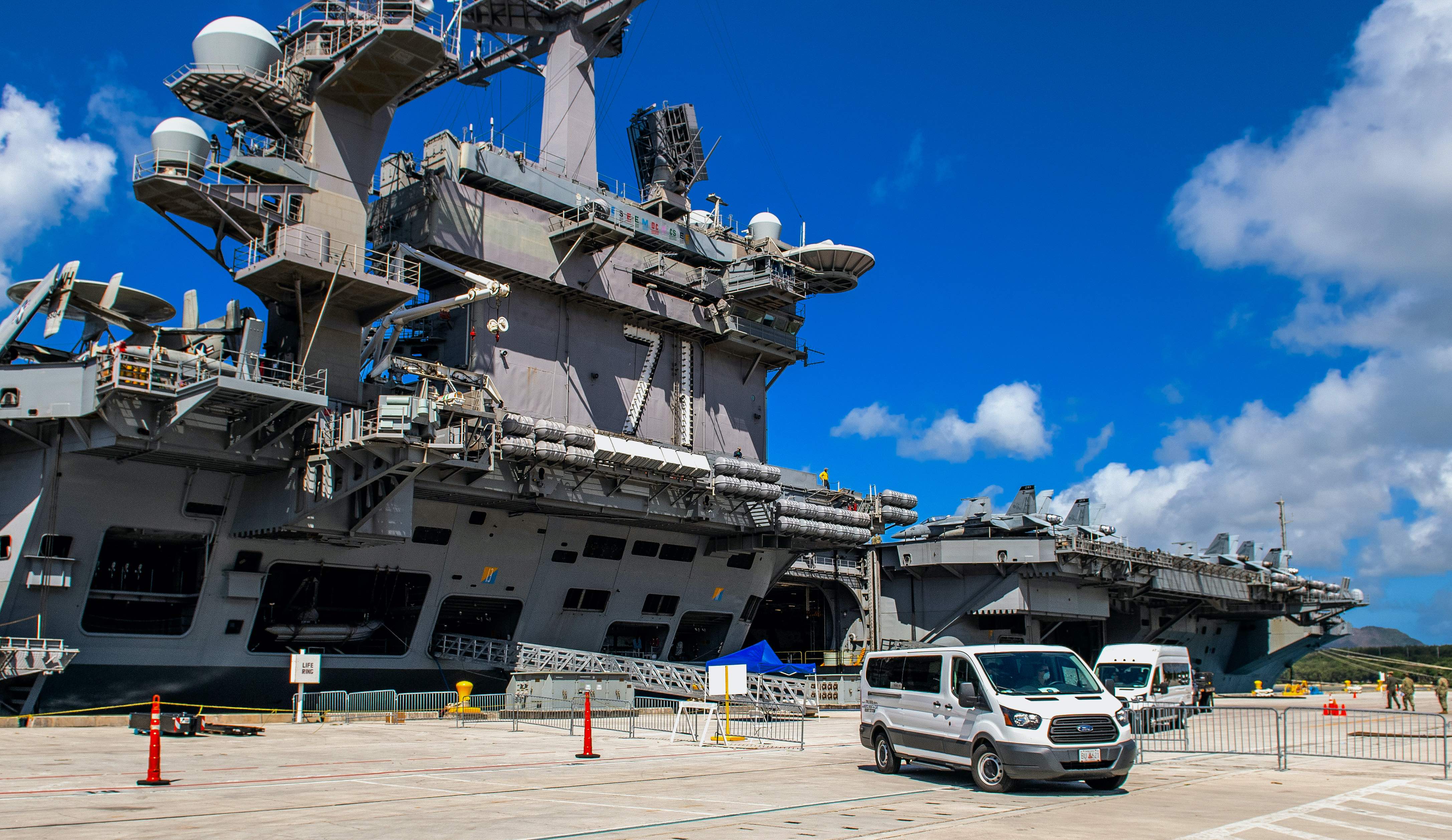 Seabees assigned to Naval Mobile Construction Battalion (NMCB) 1 and NMCB 5 coordinate transportation of sailors assigned to the aircraft carrier USS Theodore Roosevelt (CVN-71) who have tested negative for COVID-19 and are asymptomatic from Naval Base Guam to Government of Guam and military-approved commercial lodging on April 10, 2020. US Navy Photo

This post has been updated to correct how long a sailor, who has since died, was in the intensive care unit in a U.S. Navy hospital on Guam.

More than one out of ten sailors assigned to USS Theodore Roosevelt (CVN-71) have tested positive for COVID-19 as the Navy continues to isolate the infected sailors from the rest of the crew.

The service has tested 92 percent of the sailors assigned to Roosevelt and discovered 585 positive cases of the virus. 3,724 sailors have tested negative since the carrier pulled into Guam last month, the Navy announced Sunday.

In total 3,967 sailors have been moved to shore on Guam and are all in various stages of a 14-day isolation period in hotels and spare rooms across the island.

Two Roosevelt sailors have been hospitalized, one in the intensive care unit, from complications from the virus, a Navy official told USNI on Sunday afternoon.

Infections on Roosevelt account for 65 percent of the Navy’s 890 active duty COVID-19 cases.

In the last two weeks, about 230 sailors and Marines from the 3rd Medical Battalion, 3rd Marine Logistics Group, III Marine Expeditionary Force deployed to Guam to assist with the ongoing testing and treatment program for the crew.

“The team adds to the professional medical care already available aboard Theodore Roosevelt, including more than 70 embarked officers and corpsmen and a team from the Biological Defense Research Directorate, Fort Detrick, Md., which has been on board Theodore Roosevelt conducting early-warning surveillance testing for sailors who present with influenza-like symptoms,” read a statement from III MEF provided to USNI News.

The situation has served as a backdrop for last week’s resignation of former acting Navy Secretary Thomas Modly and the removal of the carrier’s former commander Capt. Brett Crozier.

The outbreak on Roosevelt has been a warning for the service on how quickly the virus can tear through the close quarters of a U.S. warship. On any given hull, sailors often work elbow to elbow and up to 40 sleep in berthing spaces with bunks stack three to four high making social distancing measures largely impossible.

The Navy and the Pentagon are studying the circumstances around the Roosevelt outbreak and applying the lessons across the service.

“We put out some detailed guidance right in the beginning and have refined it over time just in terms of the preventative measures that we need to take in ships, submarines, aircraft squadrons in our installations. And then we learned a lot from [Roosevelt],” Chief of Naval Operations Adm. Mike Gilday told reporters last week.

In particular, leaders are paying close attention how the service is preparing for the upcoming West Coast deployment of the Nimitz Carrier Strike Group.

Carrier USS Nimitz (CVN-68) in Washington state and Carrier Air Wing 17 in California are in their 12th day of a so-called 14-day restriction of movement (ROM) period with the crews subjected to daily medical evaluations.

For example, last week a sailor aboard Nimitz came down with COVID-19-like symptoms from the screenings and was separated from the crew.

Still, the service is assuming that at some point it will have to suffer through the virus while at sea.