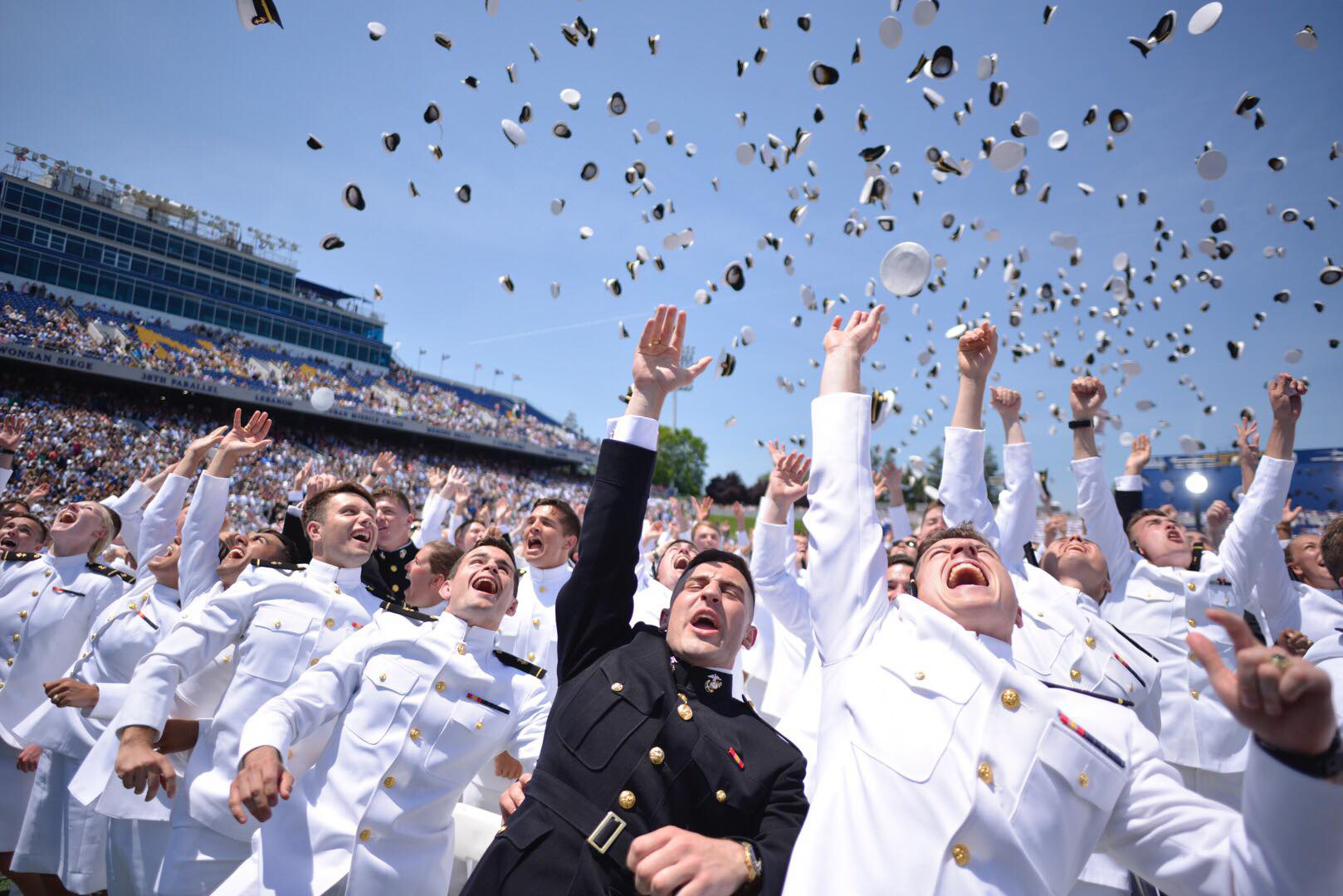 U.S. Naval Academy midshipmen from the Class of 2018 toss their covers in the air during the graduation and commissioning ceremony at Navy/Marine Corps Memorial Stadium.US Navy photo.

The U.S. Naval Academy announced Friday all public events associated with Commissioning Week 2020 were canceled because of the worldwide COVID-19 outbreak.

As of now, it’s not clear how the class of 2020 will graduate and commission into the Navy and Marine Corps. However, Vice Adm. Sean Buck, the superintendent of the Naval Academy, and 1983 graduate, issued a statement vowing to figure out a way to honor the class.

“I still intend to accomplish my second strategic priority, which is to graduate and commission each member of the Class of 2020,” Buck said in a statement. “My team is diligently planning on how, when, and where this special event will virtually occur. It won’t, unfortunately, be the traditional event we’ve all grown accustomed to witness. The Class of 2020 has worked tirelessly for nearly four years for this milestone — I believe we owe it to them to exhaust all efforts in our decision-making and planning process to make this special for them, within the guidelines we’re operating under.”

During the Naval Academy’s 175-year history, there were been 26 early graduation and commissioning ceremonies to support various war efforts including the Civil War, Spanish American War, World War I and World War II, according to the Naval Academy.

Commissioning Week 2020 was scheduled to start May 15 and end with graduation on May 22. Other events during the week were to include a Blue Angels flight demonstration and a concert by the Naval Academy Men’s Glee Club, Women’s Glee Club and Gospel Choir.

However, midshipmen did not return to Annapolis from their Spring Break. The entire Department of Defense is currently operating under a stop movement order limiting travel. The current order is due to expire Memorial Day weekend, after the scheduled commissioning week events.

“This was a very difficult decision to come to,” Buck said in his statement. “But due to the national impact of the coronavirus, I have canceled our traditional Commissioning Week public events in order to safeguard the health and welfare of the entire Naval Academy family and local community, which has been my number one strategic priority since the onset of this pandemic.”

Also postponed indefinitely are other milestone events associated with commissioning week. The Ring Dance, signifying the advancement of second-class midshipmen to being first-class and the Herndon Climb, will not occur as scheduled.

“There are certain rites of passage unique to the Naval Academy that every graduate reflects positively upon and thus helps to define and strengthen the Naval Academy experience,” said a statement from Capt. Thomas Buchanan, the commandant of the midshipmen. “Even if not held this May, our midshipmen still deserve the opportunity to enjoy those milestone events.”