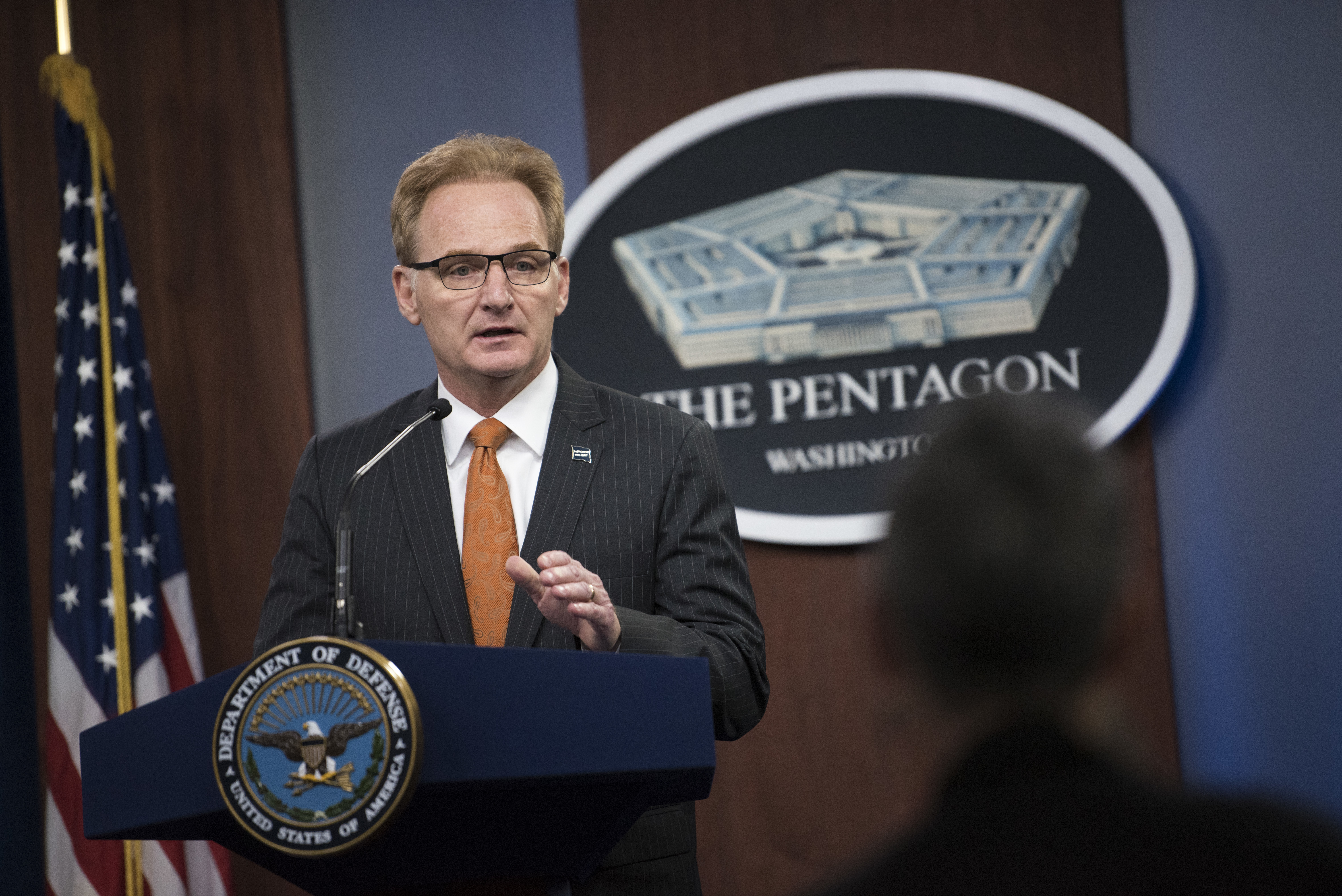 Acting Secretary of the Navy Thomas B. Modly speaks at a Pentagon press briefing, Washington, D.C. on April 2, 2020. DoD Photo

The acting Secretary of the Navy Thomas Modly said the former commander of the USS Theodore Roosevelt (CVN-72) may have broken the law in how he sent a March 31 message warning leaders of a COVID-19 outbreak on the carrier.

In remarks to sailors on the carrier, Modly told the crew the email which Capt. Brett Crozier sent to Pacific Fleet, Naval Air Forces leadership and more than 20 others contained sensitive information on the material condition of the carrier and if he sent the message with the intent that it would be public, that action would be a “serious violation of the Uniformed Code of Military Justice,” he said in an audio recording and transcript of the remarks obtained by USNI News.

“That email went out to a broad audience of people. I know that I mentioned that is was over 20 and I believe it was forwarded to far more than that. It was immediately. It was picked up by The San Francisco Chronicle which published sensitive information about the material condition of a naval warship,” Modly said.
“[If] he did this on purpose. And that’s a serious violation of the Uniformed Code of Military Justice which you are all familiar with. That message and all the contents of that message was perfectly fine for him to send to people in his chain of command in a confidential way so they could get acting on it.”

Modly didn’t specify the violation Crozier had committed but it would likely be a violation of Article 92, failure to obey an order, Rob “Butch” Bracknell, a former Marine and military lawyer told USNI News on Monday.

“[Croizer] arguably committed an offense under Article 92, UCMJ, charged as a dereliction of duty,” he told USNI News via email.
“To charge him, the Navy would have to prove that he had a certain duty, i.e. to forward his readiness concerns up the chain of command and not to the media, that the accused knew or reasonably should have known of those duties, and that the captain was willfully or through neglect or culpable inefficiency (incompetence) derelict in the performance of those duties.”

Alternatively, Modly said if Crozier thought the information wasn’t going to go public in the way he sent it he was, “too naïve or stupid” to command the carrier.

Modly also addressed Crozier’s comments that the U.S. was not at war and should focus on the well-being of sailors rather than keeping the ship ready to fight.

Capt. Brett Crozier, then-commanding officer of the aircraft carrier USS Theodore Roosevelt (CVN-71), addresses the crew during an all-hands call on the ship’s flight deck on Nov. 15, 2019. US Navy Photo

“The only reason we are dealing with this right now is a big authoritative regime called China was not forthcoming about what was happening with this virus and they put the world at risk to protect themselves and to protect their reputations,” Modly said. “We don’t do that in the Navy. We are transparent with each other using the proper channels and that’s what we’re supposed to do and that’s what we’re expected to do.”

In a statement on Monday, Modly said, “the spoken words were from the heart, and meant for them. I stand by every word I said, even, regrettably any profanity that may have been used for emphasis. Anyone who has served on a Navy ship would understand. I ask, but don’t expect, that people read them in their entirety.”

News of the remarks on the carrier, currently pier-side in Guam, follow comments Modly made Sunday to The Washington Post in which he told columnist David Ignatius he dismissed Crozier on April 2 ahead of an anticipated order to do so from the White House.

“I didn’t want to get into a decision where the president would feel that he had to intervene because the Navy couldn’t be decisive,” Modly said. “If I were president, and I saw a commanding officer of a ship exercising such poor judgment, I would be asking why the leadership of the Navy wasn’t taking action itself.”

Over the weekend, President Donald Trump also weighed in on the removal of Crozier.

“I thought it was terrible what he did, to write a letter. This isn’t a class on literature. This is a captain of a massive ship that’s nuclear-powered,” Trump said. “The letter was all over the place. That’s not appropriate. I don’t think that’s appropriate.”

The Navy is wrapping up a preliminary investigation into the climate surrounding the sending of the memo with results reporting to the Chief of Naval Operations today, officials told USNI News over the weekend.

Vice Chief of Naval Operations Adm. Robert Burke was ordered to, “conduct a preliminary inquiry into the events surrounding the disembarkation of USS Theodore Roosevelt (CVN-71) sailors in response to a COVID-19 outbreak,” Lt. Cmdr. Beth Teach told USNI News.
“The preliminary inquiry will consider command climate and circumstances surrounding the response, including communication throughout the administrative and operational chains of command. The recommendations and findings are expected to be submitted to the CNO on April 6, 2020.”

The service has tested 50 percent of the crew of Roosevelt for COIVD-19 resulting in 155 positive cases, as of Sunday.

“1,825 Sailors have moved ashore. As testing continues, the ship will keep enough sailors on board to sustain essential services and sanitize the ship in port, read the Sunday COVID-19 report from the Navy. “There have been zero hospitalizations.”