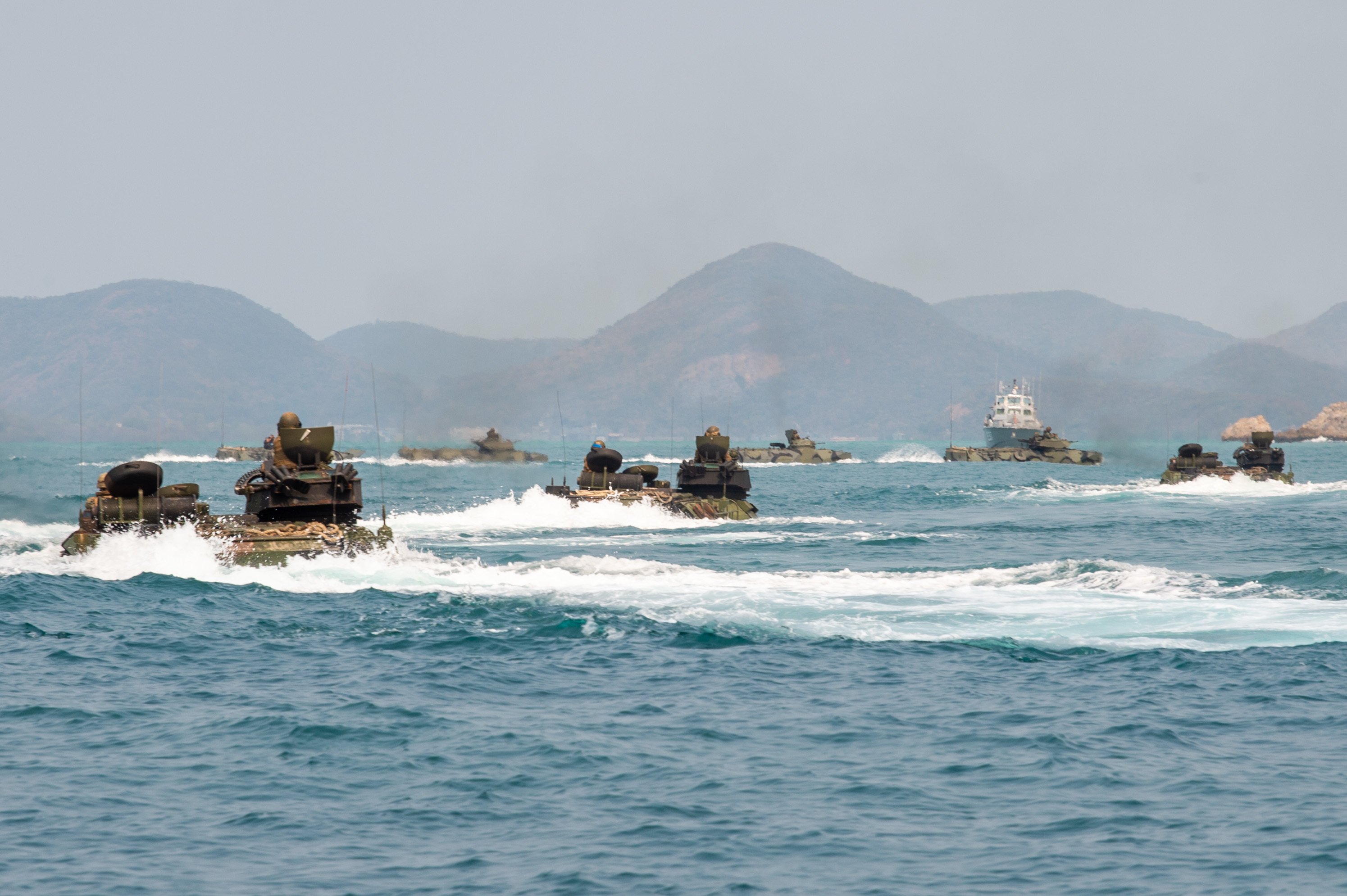 The Marine Corps’ new force design may allow East Coast expeditionary units to look much different than West Coast or Japan-based units, a nod to the complex but different environments they’ll operate in and threats they’ll face in the future.

Commandant of the Marine Corps Gen. David Berger recently released his Force Design 2030 plan, which calls for the creation of new Marine Littoral Regiments, as well as redesigned Marine Expeditionary Units (MEUs) that would be optimized for the Expeditionary Advance Base Operations concept that has driven much of the Marines’ planning in recent months.

The overarching idea of the force design is to embrace what is unique about the Marine Corps and divest of capabilities that are already resident in the joint force, Berger told reporters this week. If the service is to act as an expeditionary and amphibious crisis response force, rather than a second land army, then it needs to change how it equips and organizes itself. In the case of heavy tanks, short- and medium-range artillery, bridging companies to support sustained land campaigns and more, Berger wrote in his report that he is confident the Army has the right capabilities and that the Marine Corps does not need to duplicate that.

However, he notes he is not confident in the MEUs and Marine Littoral Regiments, which would be the formations most responsible for carrying out EABO – a concept that was reinvigorated in 2016 and signed out in 2018, and that falls under the Littoral Operations in a Contested Environment (LOCE) concept, the Marine Corps offering that pairs with the Navy’s Distributed Maritime Operations concept. 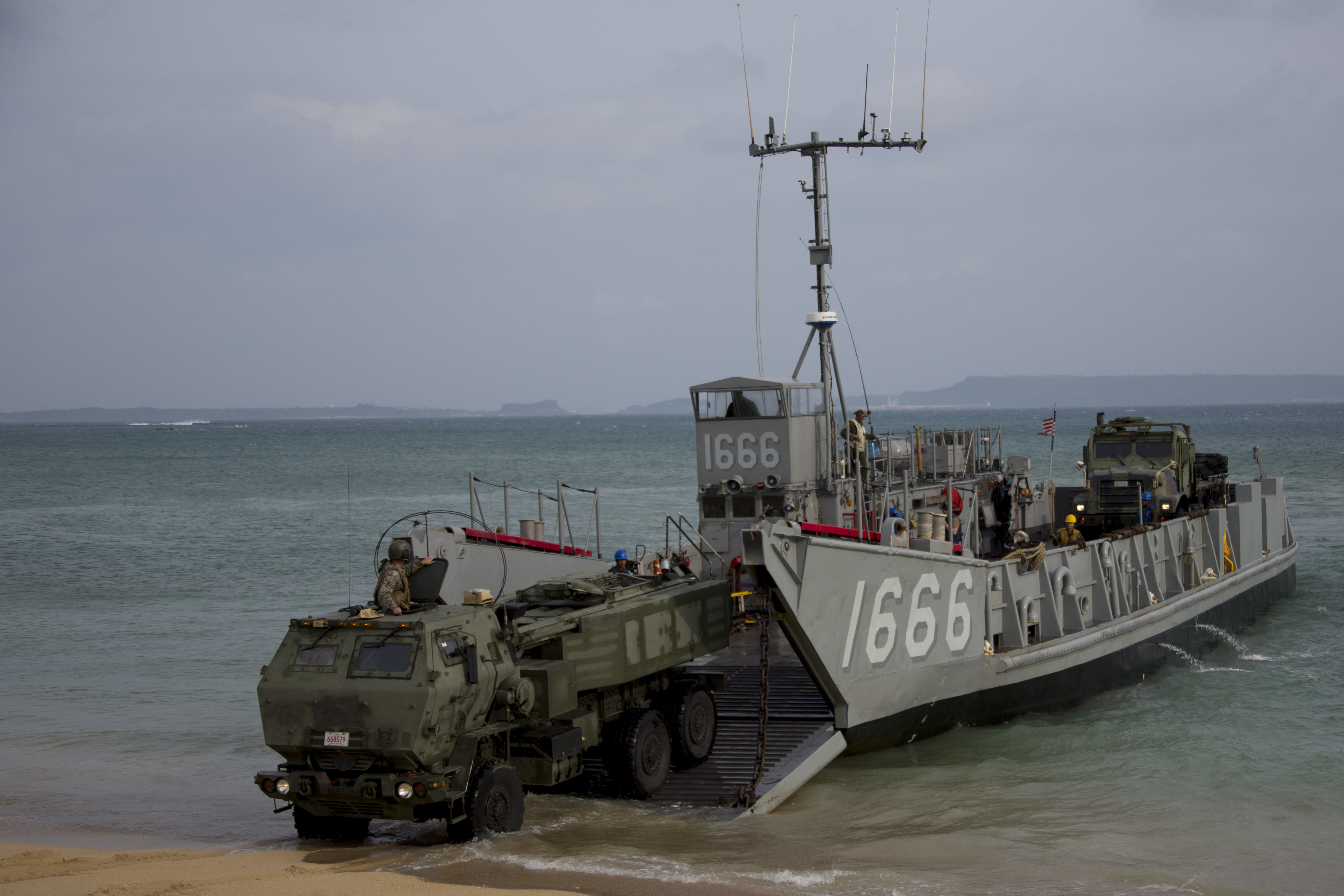 Asked by USNI News what made him confident in EABO but not confident in the formations that would execute it, he said he had a fair understanding of what a Japan-based MEU or MLR might look like, but that California- and North Carolina-based Marines would need to craft their own kinds of units too to support EABO operations in the environments they’d most likely deploy to.

“I fully embrace the concept of Distributed Maritime Operations the way that the former CNO laid it out and the current CNO embraces it. I think that Littoral Operations in a Contested Environment is something that we have to embrace and be prepared to operate in. Within that, Expeditionary Advance Base Ops, EABO, is a method, is a technique, and it has proven so far in the wargames to be very effective – if you can pull it off. And it’s not easy to do,” Berger told USNI News during the media roundtable.
“So that concept, that method, that technique of EABO poses a number of challenges for an adversary: it complicates their ability to find you and to track you, complicates their ability to engage you, and it also reassures the partners and the allies that you’re trying to work with, because you’re very dispersed among them, you’re with them – not in a standoff mode, you’re in a stand-in mode.”

“So how does that tie in to where we’re not as confident in the construct of a MLR and what the MEU of the future ought to look like? First thing I would ask you to just take onboard with us is just, we are at the point where we’re learning. We are already convinced based on wargames and modeling so far that we have a fairly good idea of what an MLR in III MEF in Japan, based out of Japan and operating in the Pacific, could look like. We have a lot more to learn there and we may absolutely adjust the framework of that in the future. What we’re not as confident in is, what is II MEF in the East Coast, what is I MEF in the West Coast, what should they build? Do they have to be mirror image? Should they look exactly in the same template and the same model? And I’m of the mode at this stage in the learning, no. Our learning should be, what is the best construct that makes sense for their operating environments?” the commandant continued.
“Same with MEUs. We have had one framework, one construct for a MEU: all seven of them had to be mirror image for the last couple of decades because they were largely flowing to the Middle East to do a mission in Central Command. Going forward, what they were originally designed for, where they’re global, now we should have the latitude for a Marine Expeditionary Unit in one place may look different than another Marine Expeditionary Unit. So when I say less confident, what I’m trying to communicate is, A), they don’t have to all be mirror image, we should be able to tailor them to their operating environment, and B), we don’t want to create all looking one way and then undo that two years from now when we discover that that’s not the best way to construct it in Camp Lejeune, it should be a little bit different. So we’ll use the ones in Japan as kind of the test bed, we’ll learn from that. The other two parts of the Fleet Marine Force will watch, will observe, and then we’ll figure out how they ought to be constructed, and it could be the same or it could be different.” 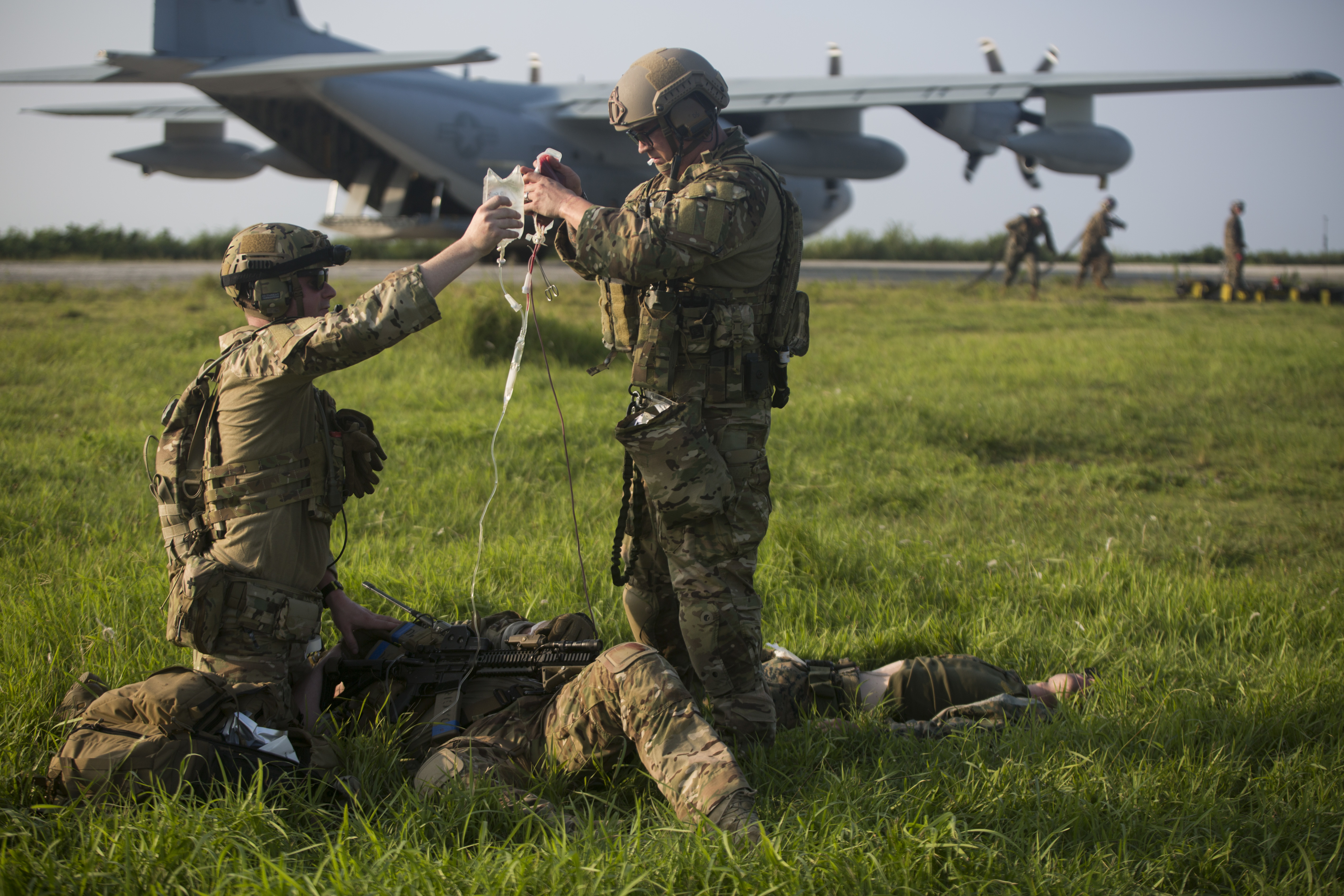 Last year III MEF Marines tested out a couple pieces of EABO in live exercises. In one, according to 31st MEU Commanding Officer Col. Robert Brodie, reconnaissance Marines conducted a high-altitude jump onto Ie Shima island near Okinawa, paving the way for a raid force being flown in to seize the island. Once the island was secured, CH-53E heavy-lift helicopters flew in fuel bladders and ordnance to conduct a forward arming and refueling point (FARP) operation with the F-35B Joint Strike Fighter jets that were experimenting with how they could contribute to island-hopping operations in the Pacific.

Later last year, a similar operation was conducted to establish a FARP for the KC-130J cargo and tanker plane – which is much larger than the F-35 and needs a more established runway, whereas the F-35B variant has short takeoff and vertical landing capability. Though setting up a FARP for the larger fixed-wing plane is more complex than for the F-35, in this exercise the KC-130Js were used as part of a casualty evacuation exercise that smaller planes couldn’t have conducted.

Shortly after the FARP set-up and CASEVAC exercise, the Marines tested another scenario, taking a beach from an amphibious ship and pushing the HIMARS rocket system ashore by LCU surface connectors. They simulated firing the HIMARS using data from an F-35B flying overhead, “demonstrating the capability for long-range precision fire support during expeditionary operations,” USNI News reported at the time. “This was the first time that a HIMARS insert by LCU has ever been completed in the Indo-Pacific region after a simulated amphibious raid, rehearsing naval expeditionary combined-arms maneuver from amphibious shipping.”

Berger said these exercises showed the artillery fly-in capability and the FARP capability, but that EABO could also call for small teams to move in and out of a piece of land to conduct intelligence collection, logistics, command and control, or other missions.

“We have to experiment with all of that to find out what the best way to build those forces are, and what kinds of equipment they need, all in the mindset of, they have to be capable but they also have to be able to displace, to be able to move, and we can’t make them so big and heavy that they can’t get out of their own way,” he told USNI News during the roundtable. 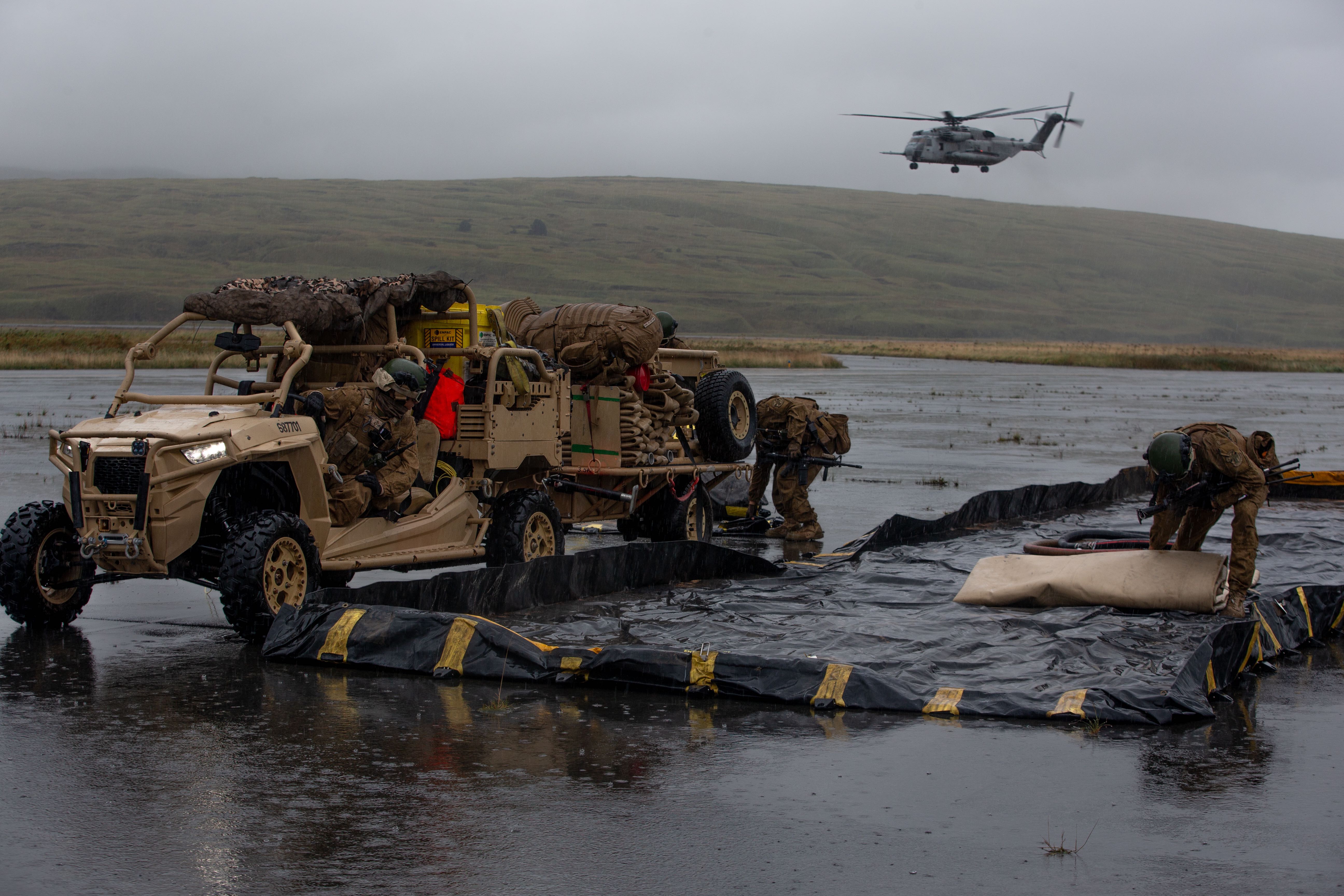 He said more modeling and simulation, wargaming and live exercises would be needed to continue to refine these ideas and to understand what the MEUs and MLRs would look like if applied to the Northern European theater, for example, or the Mediterranean, or any other area these forces may be asked to deploy to and operate in.

“In redesigning the Marine Corps, we’re more at the beginning than we are at the end. But the first step was a big step, and it began long before last summer, but the heavy part of the lifting was from last summer until now. And what we’ve learned is definitely some things we have to change in the Marine Corps to have the right Marine Corps 10 years from now. And some other things look like we might need to change them, but we don’t have enough information yet, we haven’t wargamed enough, we haven’t modeled enough to be sure of that. So some things we’re sure of and we’re going to start down that path, and other areas are going to take a lot more experimentation and more learning along the way. This isn’t the final report, the end state,” he said at the beginning of the media call.

Berger’s report expresses confidence in the areas he wants to begin divesting of, which the service can begin doing right away – and Berger noted during the call that Marines in these communities will not be handed a pink slip, but would have the chance to change specialties and continue to serve as the corps begins its decade-long transition period.

He is less confident in the investments the service will make and calls for more learning.

In calling for a redesigned and smaller infantry battalion, Berger writes, “I am not confident that we have adequately assessed all of the implications of the future operating environment on the proposed structure of our future infantry battalion. While I fully support redesign of the infantry battalion in principle, I remain unconvinced that the specific proposed new construct makes the force more capable of Distributed Operations. We must conduct more live-force experimentation to ensure our proposed design results in a truly DO-capable force.”

While he’s sure he wants to get rid of heavy ground vehicles, he admits he’s still struggling with the role of light armored vehicles as well, writing that, “while I have repeatedly stated that all-domain reconnaissance and counter-reconnaissance will be a critical element of any future contingency, I remain unconvinced that additional wheeled, manned armored ground reconnaissance units are the best and only answer – especially in the Indo-Pacific region. We need to see more evidence during Phase III (of the Force Design 2030 effort) to support this conclusion before engaging in an expansion of our existing capacity, or committing billions of dollars in procurement funds towards the acquisition of an Advanced Reconnaissance Vehicle (ARV).”

And while Berger made a big splash right after taking over as commandant last summer by saying he wanted to get away from the long-standing requirement for 38 traditional amphibious ships and instead pursue alternate amphibious and logistics ships to better support EABO, he wrote in the force design that, “I am not confident that we have identified the additional structure required to provide the tactical maneuver and logistical sustainment needed to execute DMO, LOCE and EABO in contested littoral environments against our pacing threat. While not an afterthought by any means, I do not believe our Phase I and II efforts gave logistics sufficient attention. Resolving these two areas must be a priority for Phase III.”