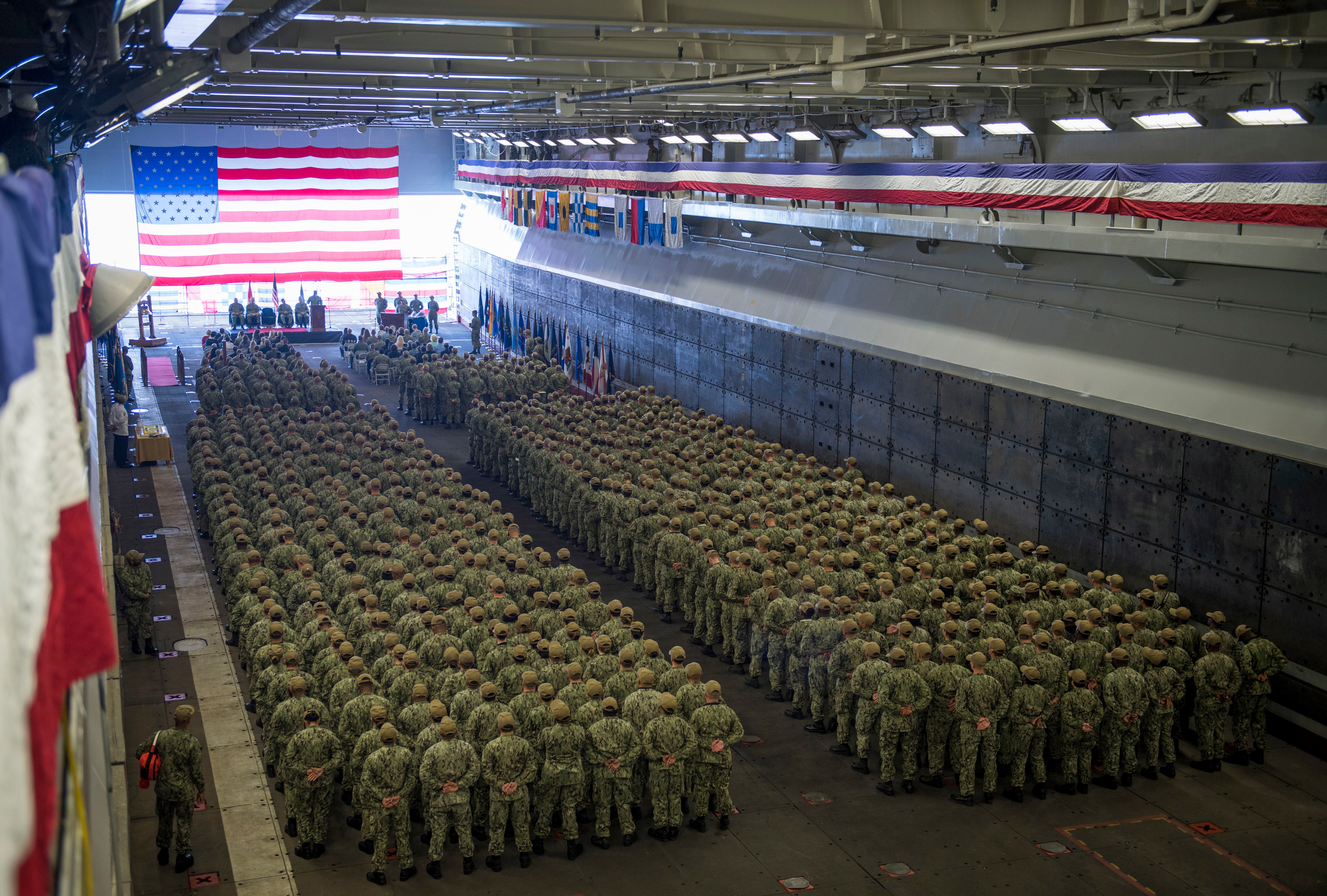 Sailors assigned to the amphibious assault ship USS Makin Island (LHD-8) stand in formation during a change of command ceremony in the ship’s well deck in 2019. US Navy Photo

The 1,900 sailors of the San Diego-based Makin Island Amphibious Ready Group will be sequestered to their ships for 14 days pier-side ahead of a planned training underway amidst fleet-wide COVID-19 concerns.

In line with new procedures to halt the spread in the submarine force, 3rd Fleet commander Vice Adm. Scott Conn ordered sailors on three-ship ARG remain aboard during a pier-side period ahead of leaving San Diego.

The order for the crew to remain on USS Makin Island (LHD-8), USS Somerset (LPD-25) and USS San Diego (LPD-22) will go into effect on Thursday afternoon, USNI News understands.

“On March 24, commander U.S. 3rd Fleet directed ships assigned to Makin Island Amphibious Ready Group to conduct fast cruises in preparation for getting underway,” 3rd Fleet spokesman Cmdr. John Fage told USNI News on Thursday morning.
“The direction was given as a mitigation effort to ensure the continued health of sailors assigned to USS Makin Island, USS Somerset and USS San Diego and to preserve the combat readiness of those ships.” 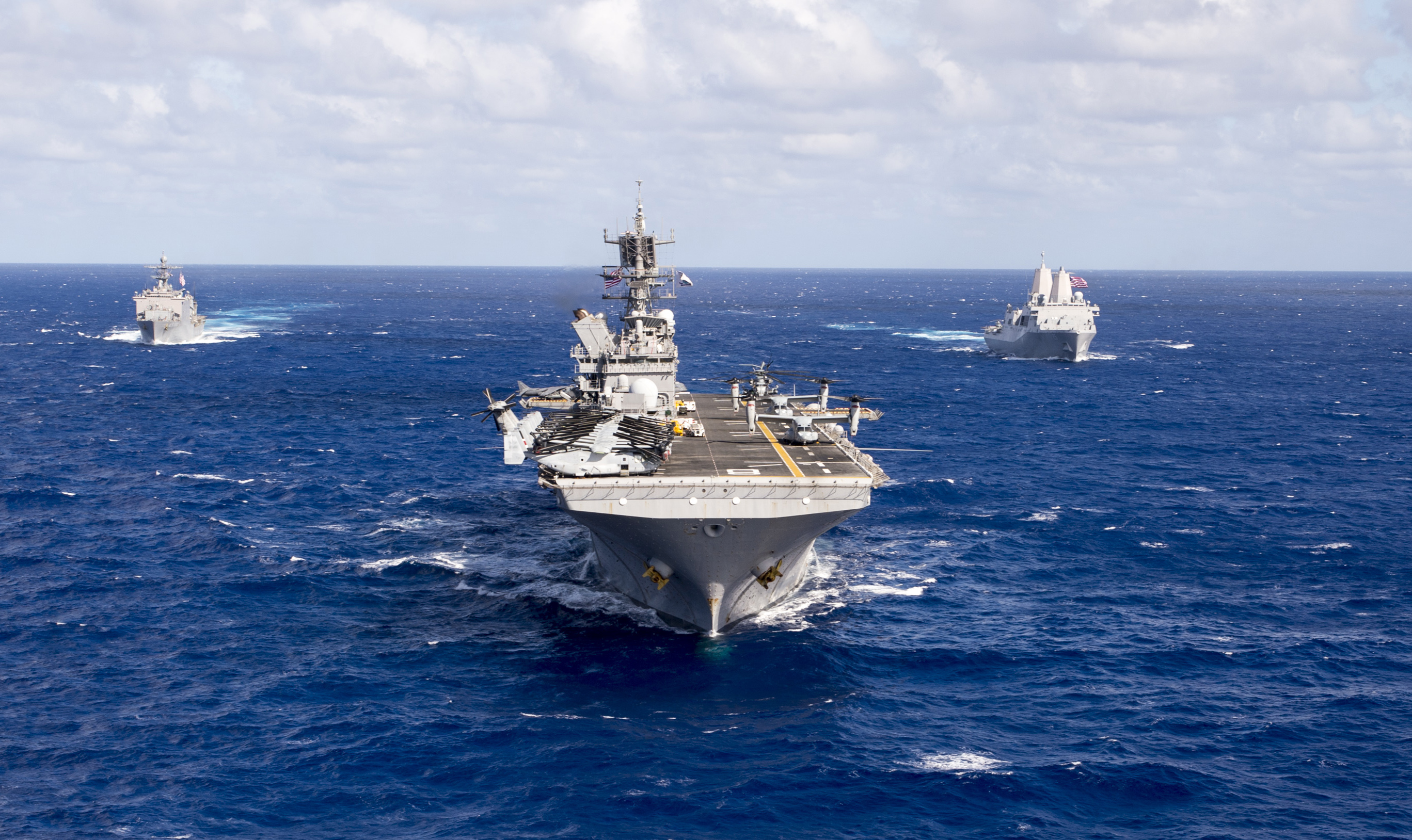 A fast cruise is typically a three to five-day training event where the ship’s systems and crew are tested at the pier ahead of heading out to sea.

The ARG isn’t expected to deploy as part of the training underway and two defense officials told USNI News the crew had been given orders with a day’s notice to report to the ship.

The move is similar to how the Navy has been handling the deployments of submarine crews — keeping the sailors confined to their boats for 14-days to ensure the crew is symptom-free before getting underway.

“For crews that are getting underway for training or deploying, we are — specifically with seaborne leg of the nuclear triad — those [14-day] provisions are in place. And so in terms of the submarine force, we’ve not seen a single case yet,” Chief of Naval Operations Adm. Mike Gilday told reporters this week.
“I think we’re doing the best we can to maintain social distancing. In an operational environment, sometimes it’s very difficult, but people are very mindful of the environment that we’re operating in right now with COVID, and they’re trying to take those precautions as best we can.”

The Makin Island ARG last deployed in 2017 with the 11th Marine Expeditionary Unit. The 11th MEU was a key support unit against the ground fight against the Islamic State in Iraq and Syria..

The order to keep the sailors at the pier comes as the Navy has been among the hardest hit across the U.S. military for COIVD-19 cases. Out of about 280 cases across the Defense Department, the Navy has reported more than 100 cases in sailors as of Thursday morning.

In the Navy, California has been the epicenter of the COVID-19 outbreak with the bulk of the cases centered in San Diego, officials have told USNI News.

“We’re managing every event on a case-by-case basis,” U.S. Pacific Fleet commander Adm. John Aquilino told USNI News on Wednesday.
“We don’t comment on operational schedules, and we don’t put out information that might give any adversary an understanding of our readiness.”