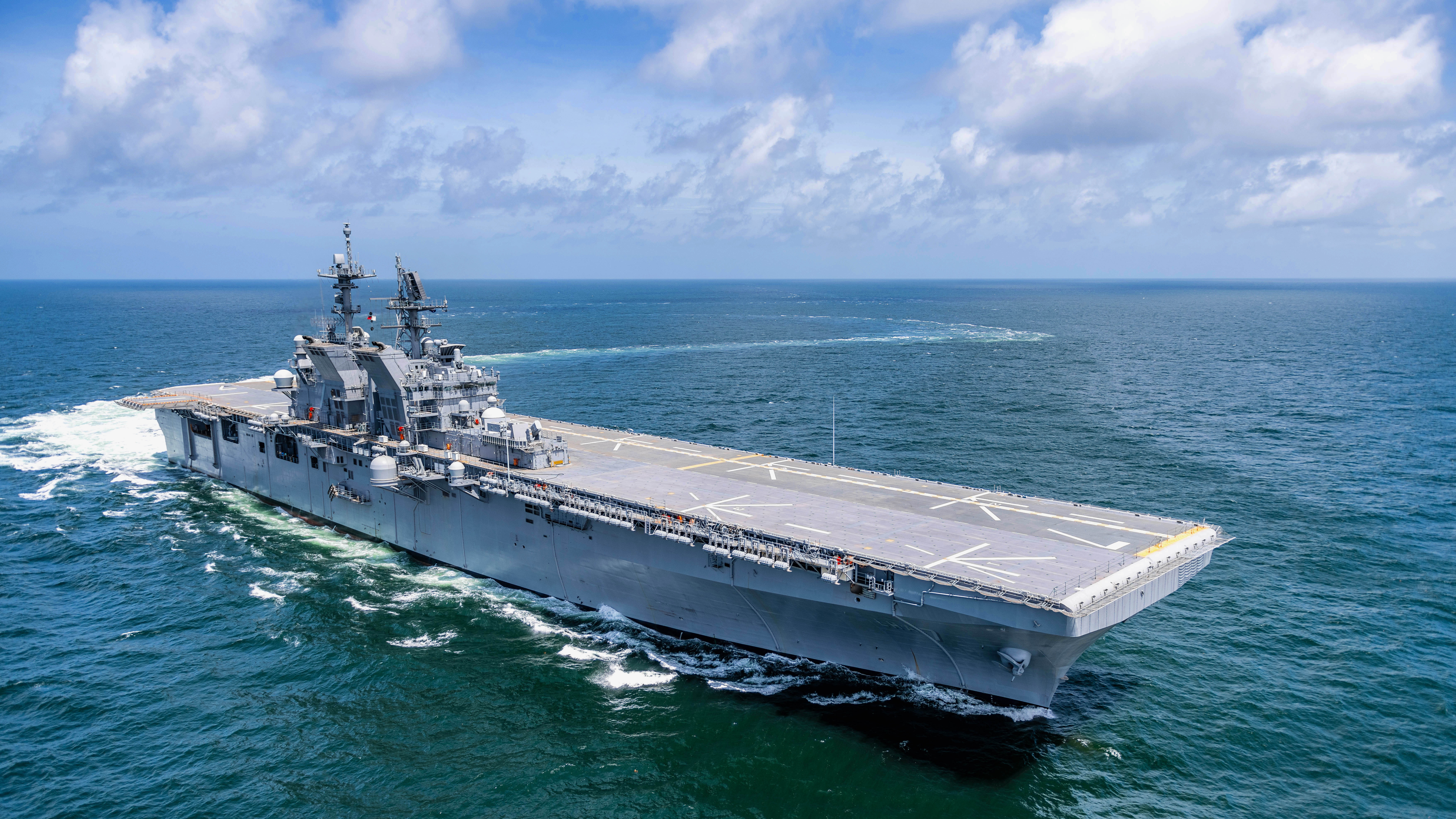 This post was updated to include a statement from a Navy spokesperson.

THE PENTAGON — The Defense Department justified redirecting shipbuilding funds to pay for border barrier construction by saying the yards don’t currently have the capacity to spend the money, a Pentagon spokesman told reporters. At least one shipbuilder disagrees.

Last week, the Department of Defense unveiled a plan to reroute $1.5 billion from two major shipbuilding programs and aircraft purchases for the Navy and Marine Corps to help pay for the estimated $3.8 billion bill to build physical barriers along the southwest U.S. border, according to a copy of a Fiscal Year 2020 reprogramming request obtained by USNI News.

Programs identified to have funds routed for border wall construction were selected because they were things Congress overfunded or where the funding was approved ahead of the Pentagon’s need or ability to sign contracts, Jonathan Hoffman, the Pentagon’s chief spokesman, said during a media briefing Wednesday.

“An example of that would be, the first one would be aircraft, more aircraft than what we requested, and the second would be shipbuilding,” Hoffman said. “We were funded to complete construction on an additional ship, and we don’t have the capacity, the shipbuilding capacity, the contracting to do that for a few more years.”

Under the reprogramming plan, the Navy will lose $650 million in early procurement for the yet-to-be-named amphibious assault ship LHA-9 and $261 million for a new Spearhead-class Expeditionary Fast Transport ship. Naval aviation will lose $233 million for two F-35B Lightning II Joint Strike Fighters and $155 million for one P-8A anti-submarine warfare aircraft.

“There is absolutely capacity at Ingalls to build LHA-9, and the most efficient and affordable way for Ingalls and the supply chain to deliver these ships to our nation’s fleet is to build them on four-year centers,” Beci Brenton, a spokeswoman for Huntington Ingalls Industries, told USNI News in an email.

In March, Congress debated adding the LHA-9 funding to start construction ahead of its anticipated 2024 start date to keep the shipyards operating at that efficient level. Otherwise, there were fears a gap between LHA-8 and LHA-9 would occur and would affect the cost or quality of LHA-9.

LHA-8 was procured in 2017, meaning that the optimal time for the shipyard to begin LHA-9 would be 2021. Though the Navy didn’t try to include full funding for the ship that early, the service and Congress were hoping to provide advance procurement funding as early as 2020 to allow Ingalls Shipbuilding to begin working with suppliers for whom a seven-year gap would put their business at risk, or to begin activities at the yard where a seven-year gap would mean laying off experienced personnel.

“We’re working closely with stakeholders and [the office of the Secretary of Defense] OSD to ensure these impacts are minimized with the LHA,” Capt. Danny Hernandez, a Navy spokesman, told USNI News on Wednesday. “We plan to build the LHA in 2023 and plan to fund this later in budget closer to when we build the ship.”

Funding availability was cited as the only reason the Navy proposed waiting until 2024 to start LHA-9, James Geurts, the Navy’s acquisition chief, said last year during a Senate Armed Services seapower subcommittee hearing.

“We’re concerned with it in ’24; it was there from an affordability standpoint. We’re going to look hard in the ’21 budget at potentially moving that to the left as funding allows because I’m also concerned with the seven-year break in that ship and I do not want to lose the excellent workforce we have cranking out LHAs right now,” Geurts said, referring to the seven-year gap between buying LHA-8, the future Bougainville, and buying LHA-9.

The Pentagon is still interested in building the amphibious warship, just at a later date, Hoffman said.

“We still intend in 2023 to continue that shipbuilding, but the funds were better used for a different purpose now than to be sitting there for two years,” he said.

Also, during Wednesday’s briefing, Hoffman confirmed John Rood, the undersecretary of defense in charge of policy, was resigning effective at the end of the month.

Earlier this month, Rood released a statement confirming a U.S. Navy submarine was carrying at least one W76-2 low-yield SLBM. Rood did not name the boomer, but the Federation of American Scientists published a report stating USS Tennessee (SSBN-734) left Kings Bay Submarine Base, Ga., carrying at least one low-yield ballistic missile when it departed for a strategic defense patrol at the end of 2019.

James Anderson, the deputy undersecretary for policy, will assume Rood’s role until a permanent replacement is nominated by the President and confirmed by the Senate.

“Secretary Esper thanks John Rood for his service to the department and the critical role he played implementing the National Defense Strategy. John worked on a range of issues from modernizing nuclear deterrence capability, our missile review and efforts to increase burden sharing among our allies, including NATO,” Hoffman said. “We thank him and wish him the best in his future endeavors.”