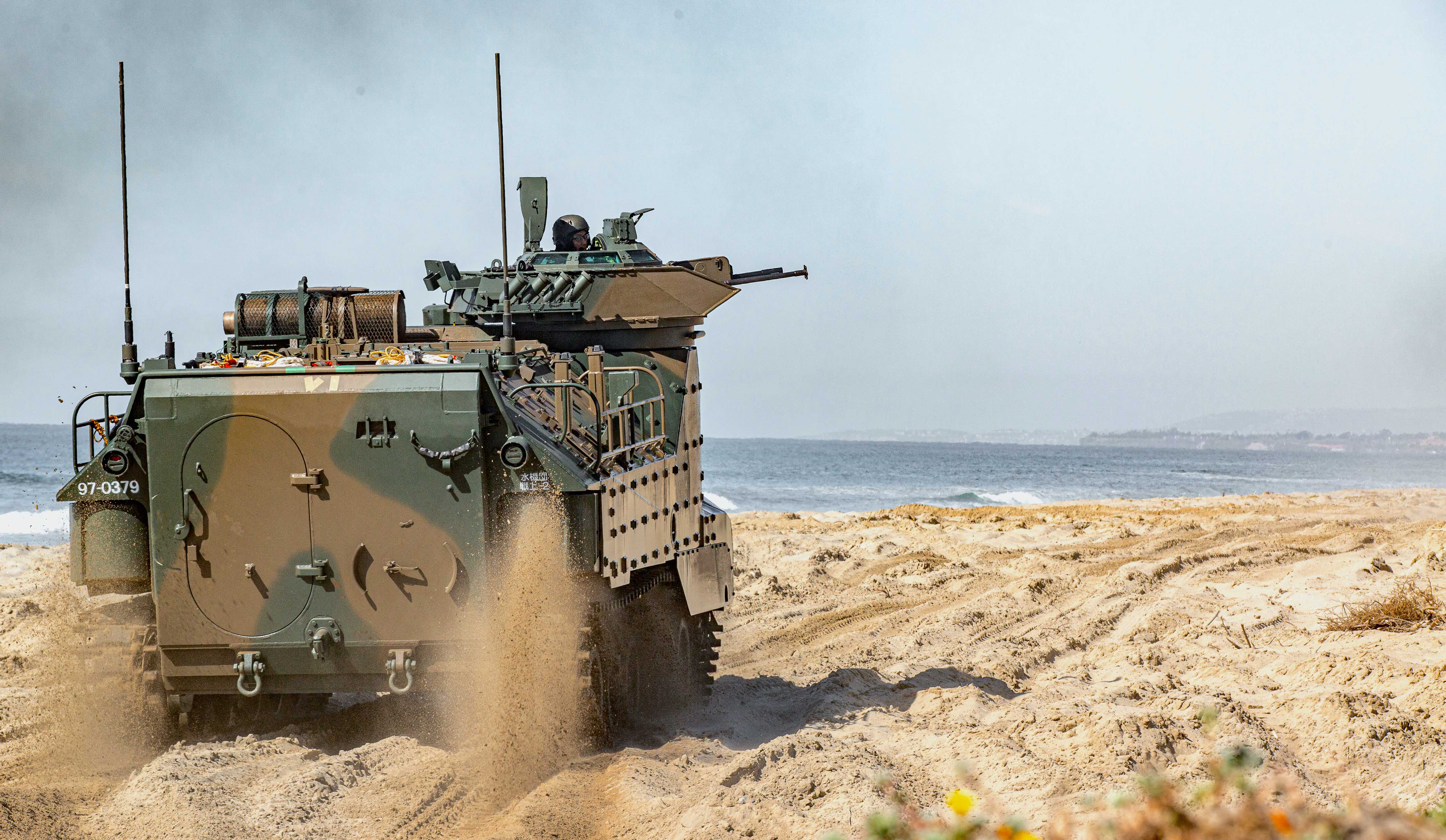 A Japan Ground Self-Defense Force assault amphibious vehicle drives on the beach during an amphibious assault as part of Exercise Iron Fist 2020 on Marine Corps Base Camp Pendleton, Calif., on Feb. 12, 2020. US Marine Corps Photo

The Marines had quieted an opposing “enemy” force holed up in a coastal village after their beach assault aboard a platoon of 3rd Assault Amphibian Battalion amphibious landing vehicles. By late afternoon on Wednesday, the nine AAVs – all driven by and carrying soldiers with Japan Ground Self-Defense Force’s Amphibious Rapid Deployment Brigade – had pushed their way through Marine Corps Base Camp Pendleton’s dirt roads to their toward several training objectives. They are among 1,200 Marines, sailors and soldiers participating in the annual, U.S.-Japan bilateral amphibious exercise Iron Fist 2020, which runs Jan. 17 to Feb. 21.

Amphibious assaults and beach landings aren’t uncommon during training exercises at this coastal base. But this year’s Iron Fist exercise marked the first time this group of 310 Japanese soldiers – 3rd Company with 2nd Amphibious Rapid Deployment Regiment Landing Team – launched from a ship and landed ashore in a coordinated mission alongside Marines, who earlier had launched their AAVs from the San Antonio-class amphibious transport dock USS Portland (LPD-27).

“We wanted to pursue the concept with them of ‘separate but synchronized,’ so headquarters and staffs working together and synchronizing,” Capt. Coleman Fuquea, an artillery officer and exercise planner with the 15th Marine Expeditionary Unit, told USNI News. “But on the tactical level, U.S. and our Japanese allies would fight in separate battle spaces.”

While a platoon of Marines and Japanese soldiers wouldn’t clear a building together, they would operate together with “separate objectives, separate battle spaces,” Fuquea said. Planners designed the scenarios with two main battle spaces – one Marine, one JGSDF – but with “a synchronized mission and synchronized staffs to facilitate that.”

The JGSDF light-infantry troops spent several weeks training with various I Marine Expeditionary Force units at Camp Pendleton’s ranges. Then they embarked their AAVs and trucks onto Portland and Pearl Harbor at Naval Base San Diego, Calif., and trained and rehearsed beach landings at the offshore training range on San Clemente Island before the Camp Pendleton beach landing.

“They’re a very capable military force,” noted Fuquea, who’s worked with the JGSDF to develop the concepts for the exercise and has previously served tours in Japan. 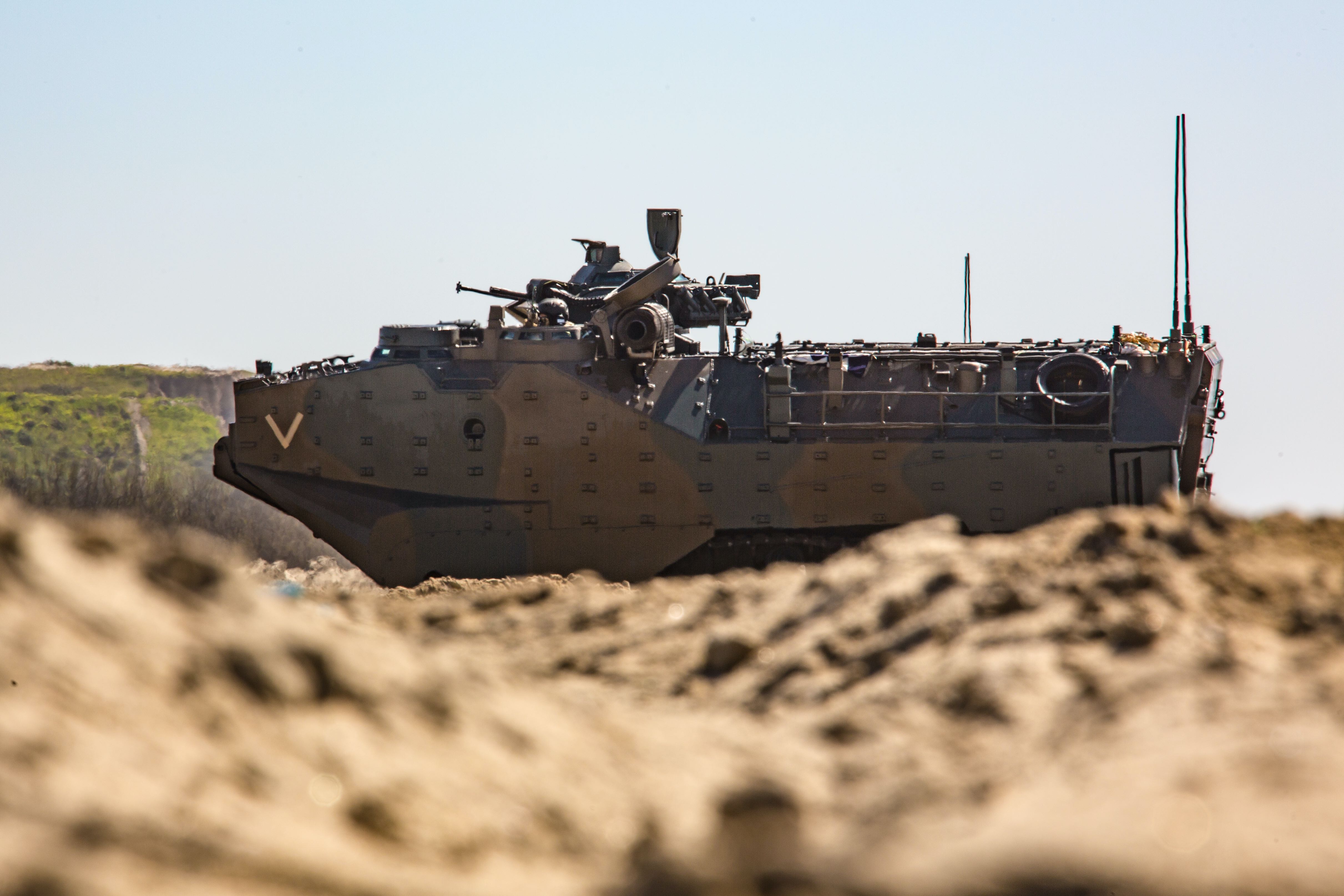 A dozen Japanese officials, including Maj. Gen. Takanori Hirata, ARDB’s commander, observed last week’s Red Beach landing and watched as the soldiers headed to their follow-on objective, a fictional target they’d clear before proceeding inland for night-time training as the Marines moved onto a separate series of simulated targets to the south. “The scenario is the seizure of an island, built into our larger scenario,” Fuquea said.

The Japanese force wasn’t training to seize an island – Japan’s constitution prohibits offensive military operations – but rather is building and strengthening its capabilities for maritime security, including defending islands from an invading force. The scenario is a real and ongoing threat to Japan, an island-nation whose 3,000-plus islands include contested claims by China and other countries, including the disputed Senkaku Islands in the East China Sea.

Island defense is critically important, JGSDF officials said at the Jan. 21 opening ceremony, as activities along other fronts including North Korea and Russia threatens Japan’s security. Senior military leaders have been vocal, especially in recent years, over the seriousness of the threats that Japan faces, and particularly from China’s recent expansive operations across the region that have rattled its neighbors.

Maj. Gen. Takanori Hirata echoed those sentiments of regional security and “uncertainty” at a press conference held Feb. 10 on the Harpers Ferry-class Pearl Harbor, off the coast of Camp Pendleton. “The importance of island defense is more and more key,” said the two-star general, according to the Orange County Register. He praised the side-by-side training with Marines and sailors and called the U.S.-Japan alliance and mutual security treaty “a pillar safeguarding peace in Asia.”

Along with infantry, AAV and reconnaissance training, medical training remains an integral part of Iron Fist exercises, which in its early years emphasized humanitarian and disaster operations. This year’s exercise included trauma care, and both Marines and JGSDF shared their standard operating procedures in classroom instruction and practical applications and during en-route care training with Combat Logistics Battalion 15, including aboard flights with MV-22 Osprey aircraft. Japan is moving ahead with purchasing AAVs as well as Ospreys to equip its forces.

Soldiers also worked alongside Marines and sailors with 1st Air Naval Gunfire Liaison Company during call-for-fire training at the offshore live-fire ranges on San Clemente. “The ARDB is very interested in San Clemente Island, because that’s a great range complex. There’s a lot of restrictions they have in Japan for live-fire maneuver,” Fuquea said. “They’re getting a lot of unique training opportunities here, and it’s really great for us to teach them (standard operating procedures) and for us to learn from them.”

Like in prior years, San Diego-based Expeditionary Strike Group 3 is providing the logistical L-class ship lift for the soldiers, since no Japan Maritime Self-Defense Force vessels have participated in Iron Fist, although several JMSDF officials observed the exercise.

“It would be great in the future if we could get a Japanese L-class ship here,” Fuquea said, adding “what we’d really like to see in the future is force-on-force training and have the U.S. and the Japanese more of a sparring-partner relationship. That allows unit leaders… to get a thinking adversary.”

Incorporating that into Iron Fist training in coming years as the Japan continues to build and strengthen its ARDB working with the U.S., he added, “I think it would have radical benefits to us both.”