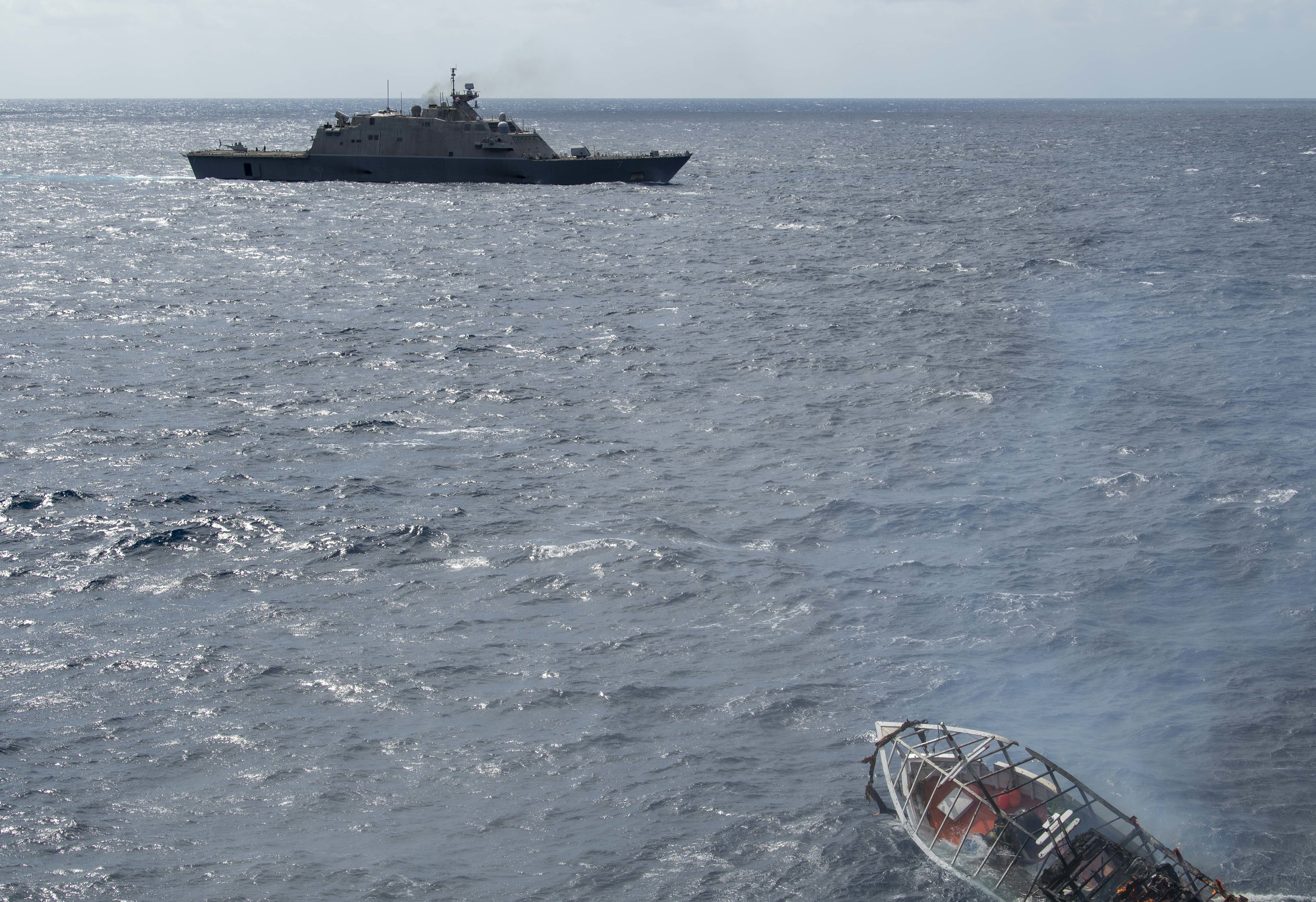 Adm. Craig Faller lauded the ongoing deployment of the Littoral Combat Ship USS Detroit (LCS-7) to U.S. Southern Command while at the same time calling for more Navy support in the region.

The Freedom-class LCS has been operating in U.S. 4th Fleet since November with an embarked Coast Guard law enforcement detachment (LEDET) as part of the SOUTHCOM-led international anti-trafficking effort centered on Central and South America.

“Counternarcotics operations demand platforms for the endgame working with law enforcement to take both the detainees we gain intel from and drugs off the street here in the U.S.,” the SOUTHCOM commander told the Senate Armed Services Committee on Wednesday.
“USS Detroit had success in that endeavor. They have an unmanned aerial vehicle – Fire Scout – embarked along with a helicopter. That’s a great force package. We’ve also used the Detroit in a freedom of navigation operation off the coast of Venezuela in waters Venezuela claims that international law does not recognize.”

While Faller was high on Detroit, he said his command needed more hulls to help stem the flow of narcotics from South and Central America that come to the U.S. over water.

“We depend on ships,” he said.
“Our Coast Guard performed brilliantly supplying more ships than they’d even promised through the allocation process. And our Navy stepped up this year with the USS Detroit. We need more ships. We think the number of Navy ships would be about three to sustain the presence and pressure.”

For years, the Navy contributed to the ongoing Operation Martillo through its aged fleet of Oliver Hazard Perry-class frigates (FFG-7). The frigates were a consistent platform for Coast Guard law enforcement detachments that had the legal authority to interdict and detain drug runners.

However, since the Perrys left service 2015, the Navy’s presence in the region has been inconsistent, with the Coast Guard National Security Cutters serving as the primary platform for interdiction missions.

The high speed and low draft of LCS make it ideal to operate in and around South and Central America. Its smaller size than a guided-missile destroyer make it easier to operate with foreign navies and coast guards that have significantly smaller ships.

“Detroit’s performance since November has been above standards in all manners of reliability. And we welcome the deployment of next Littoral Combat Ship to the region,” Faller said. “We could use more of these ships. They’re well-suited for the kind of missions in this hemisphere.”

In addition to the anti-trafficking operations, Detroit has operated with destroyer USS Gridley (DDG-101) and deployed with U.S. Marines and special operations forces.

Faller’s testimony to the SASC comes as the Pentagon is reviewing the combatant command in light of the new National Defense Strategy and competition with China and Russia.

“Everybody always assumes that when we talk ‘reviews,’ it means reductions. Not necessarily. That’s one of the notions I’ve been trying to dispel,” Secretary of Defense Mark Esper told reporters while visiting SOUTHCOM headquarters in Miami, reported Defense News.
“While it may mean right-sizing, it may mean additional forces into the region. We talked about that, and capabilities and any other type of resources needed. That’s how I’m looking at this. It doesn’t mean reduction everywhere.”

In addition the counter-trafficking report to the SASC, Faller did highlight the growing Rusian and Chinese influence in the region.