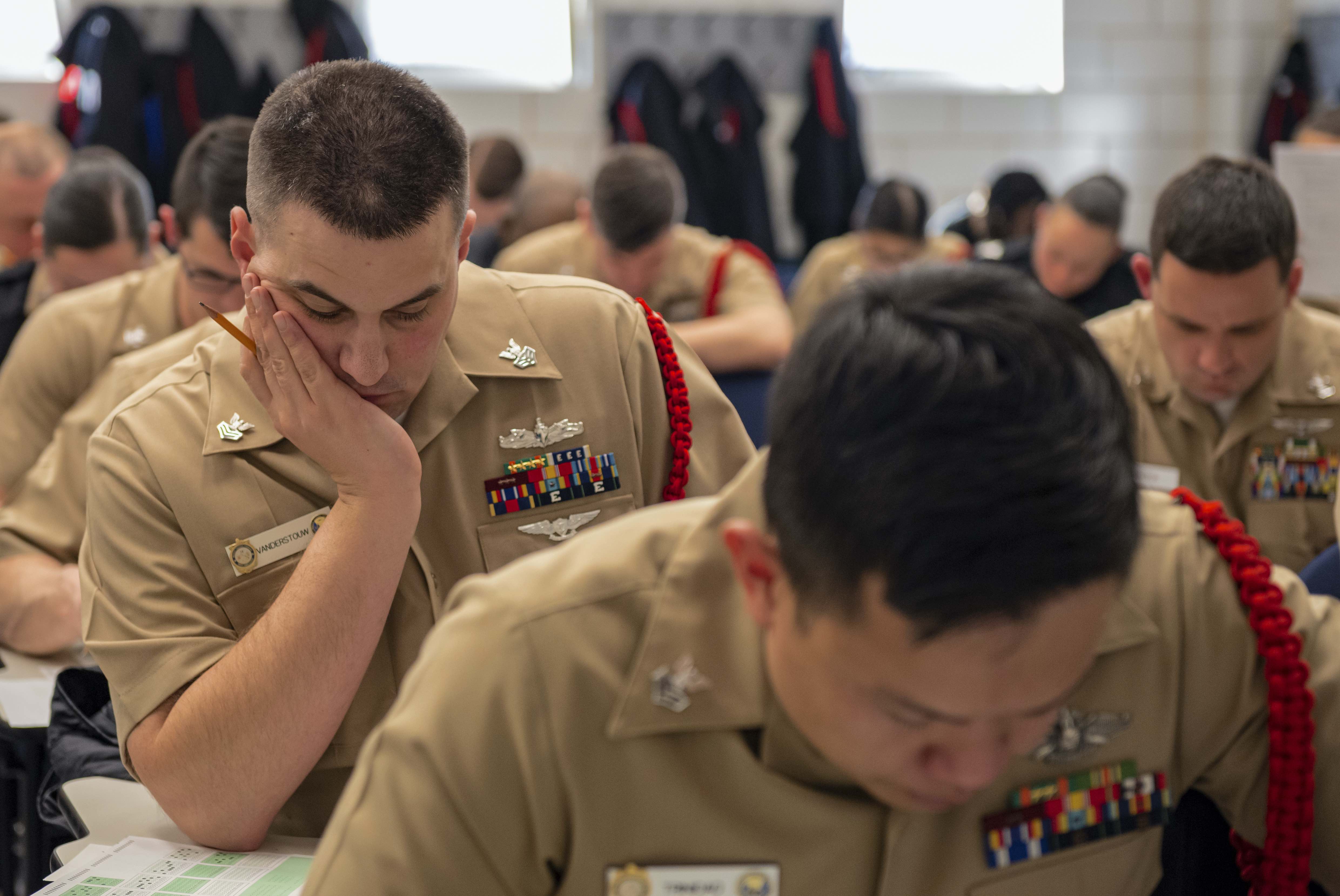 TYSONS, Va. – The Navy’s community college will begin teaching its first cohort of students a year from now, with several hundred students studying engineering and information technology as a proof of concept of the value of providing technical education to enlisted sailors and Marines and civilians.

Kroger told USNI News after speaking at a National Defense Industry Association event that the community college would likely have no more than 10 majors, focused on areas where technical knowledge would improve fleet performance. He said the Department of the Navy recently surveyed enlisted sailors and Marines and their commanders to help finalize the list of majors the college will offer.

That cohort will consist of 300 to 600 students – and a good chunk of those students will be Marine Corps civilians and enlisted Marines who fall under Deputy Commandant for Information Lt. Gen. Lori Reynolds, who Kroger said was one of the DoN leaders who has been most excited about the potential the community college could have to help her workforce.

“The feedback we’ve gotten from sailors and Marines are that they’re excited about this. The feedback we’ve gotten from commanders is really interesting: they’re not really sure what a community college can do until we explain it, and then folks like Gen. Reynolds are early enthusiastic adopters because they recognize the transformative impact this can have on their ability to achieve their missions.”

These Marine Corps students will sit in classes alongside enlisted sailors from the Navy’s U.S. 10th Fleet, which oversees cyber operations, to ensure common education across the naval enterprise.

Kroger said during the event that the Naval Community College would be located at Marine Corps Base Quantico in Virginia and would sit next to the Marine Corps University. The DoN is in the process of interviewing applicants for the president and provost positions, and this spring a request for proposals will go out to industry, who will deliver at least 90 percent of the educational content, he noted.

The importance of bringing industry in comes down to helping train sailors, Marines and civilian employees with the most advanced techniques and the best equipment available, even if the services aren’t currently using them. Chief Information Officer Aaron Weiss said during the same event that the Navy is about 15 years behind industry when it comes to IT, and so getting warfighters into classrooms with their industry counterparts could help them see what better practices and tools are out there and then bring that knowledge back into the service to hopefully drive a culture change.

Kroger said that, for the IT students, for example, they get trained by the Navy or Marine Corps to be able to begin service in their occupational specialty or rating. As soon as that basic job training is done, though, he wants to get them into continuing education programs because the IT field evolves so rapidly. His idea is that the community college could allow them to earn a world-class associate’s degree in IT with industry certification, led by companies such as Google, Amazon or Microsoft so that “they’re getting the very most up-to-date training” from leaders in their fields that also have an existing relationship with the military.

On the engineering side, Kroger noted that sailors who go through nuclear school are “two thirds of the way to an associate’s degree, if they got the college credit for what they’re doing. What we’re going to do is create through the community college, they’ll get college credit for that, and have an immediate pipeline to finishing up an associate’s degree in engineering that will develop that deeper intellectual capability in the nuclear force.” The engineering program is also likely to kick off as part of the proof-of-concept start a year from now.

More broadly, Kroger said trends in the education field will help the Navy incorporate learning throughout career paths, rather than force officers to be diverted from their occupations to take a year or two to devote solely to higher education. He said institutions such as Harvard have turned their business models to focus on executive education programs and low-residence programs that may require just a couple days a month on campus.

Kroger said his wife, who serves as the vice provost for student affairs at Portland State University, wanted to earn a doctorate but didn’t want to step down from her job to pursue the degree full-time. She enrolled in a program at the University of Pennsylvania that required her to be on campus three days a month, and despite the limited in-person requirement, Kroger said she’s found the education to be “transformational” for her career.

His wife’s experience “made me realize how much power there is in this low-residency model,” he said, and he’s applied that experience to how he talks to fleet leaders about changing how they educate the fleet. For example, a conversation with the aviation community in previous years wouldn’t have gone well if he proposed taking 10 percent of pilots and putting them into master’s programs. The aviation community spends a lot of money to train pilots and doesn’t have enough of them to send so many off to school.

Instead, thanks to these new kinds of programs tailored to working adults, “what I told Air Boss is, if you give me three days, I’ll take your F-35 pilots that are currently in the desert in California, and we will take them for a couple days a month, they’ll be going to graduate executive programs at Stanford and Berkeley and UCLA and the Naval Postgraduate School. They will get the education they need, and we will maintain their operational tempo. And the response was, my guys would love to be at Stanford or UCLA for three days a month, it would get them out of the desert.”

Modly noted during the event that online education is also much improved compared to the early days of online degrees, which allows the Navy to pay to educate a much greater number of servicemen and women than would be possible at brick-and-mortar schools. Additionally, the tools that exist to support online education could be applied to military-specific schooling, something Modly said he was excited to pursue.

The acting secretary pointed to the MasterClass platform that boasts more than 75 kinds of classes, each with about 20 10-minute lessons. Classes cover topics from science and technology to music and entertainment to culinary arts, and are taught by the best of the best – Misty Copeland teaches ballet, Danny Elfman teaches music for film, Gordon Ramsay teaches cooking, Steve Martin teaches comedy, and more.

“Ten years ago you couldn’t do that and deliver that kind of content,” Modly said.
“Think about what we could do – a course for young Marines on ethics and leadership taught by” former Commandant of the Marine Corps Gen. Alfred Gray, who was sitting in the audience.