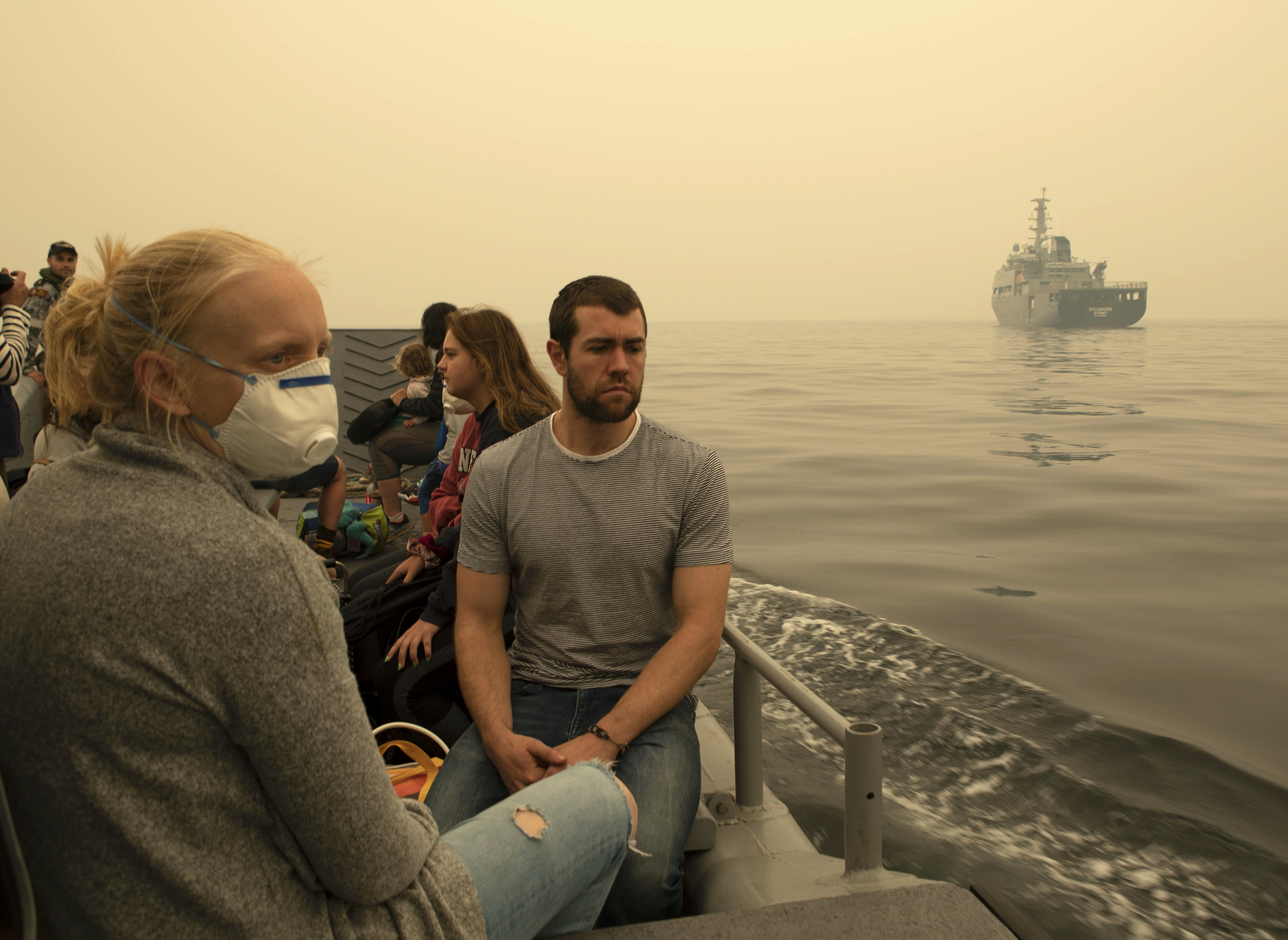 Evacuees from Mallacoota are transported by landing craft to M/V Sycamore on Jan. 3, 2020. RAN Photo

The wildfires in Australia have damaged significant parts of the country on an unprecedented scale and put large numbers of people at risk in remote locations as well as in population centers.

So far, the role of the military under Operation Bushfire Assist has been limited to a support role as the Australian Defence Force (ADF) is not specialized in fighting fires.

The ADF is “not trained, equipped or certified to undertake ground-based or aerial bush firefighting and does not get involved in the direct act of fighting bushfires outside defense property,” the force said.

But as the extent of the disaster has unfolded the role of the ADF has expanded with land, sea and air services providing more support to the emergency services where necessary using two Joint Task Forces (JTFs): JTF 646 in Victoria and JTF 1110 in New South Wales. 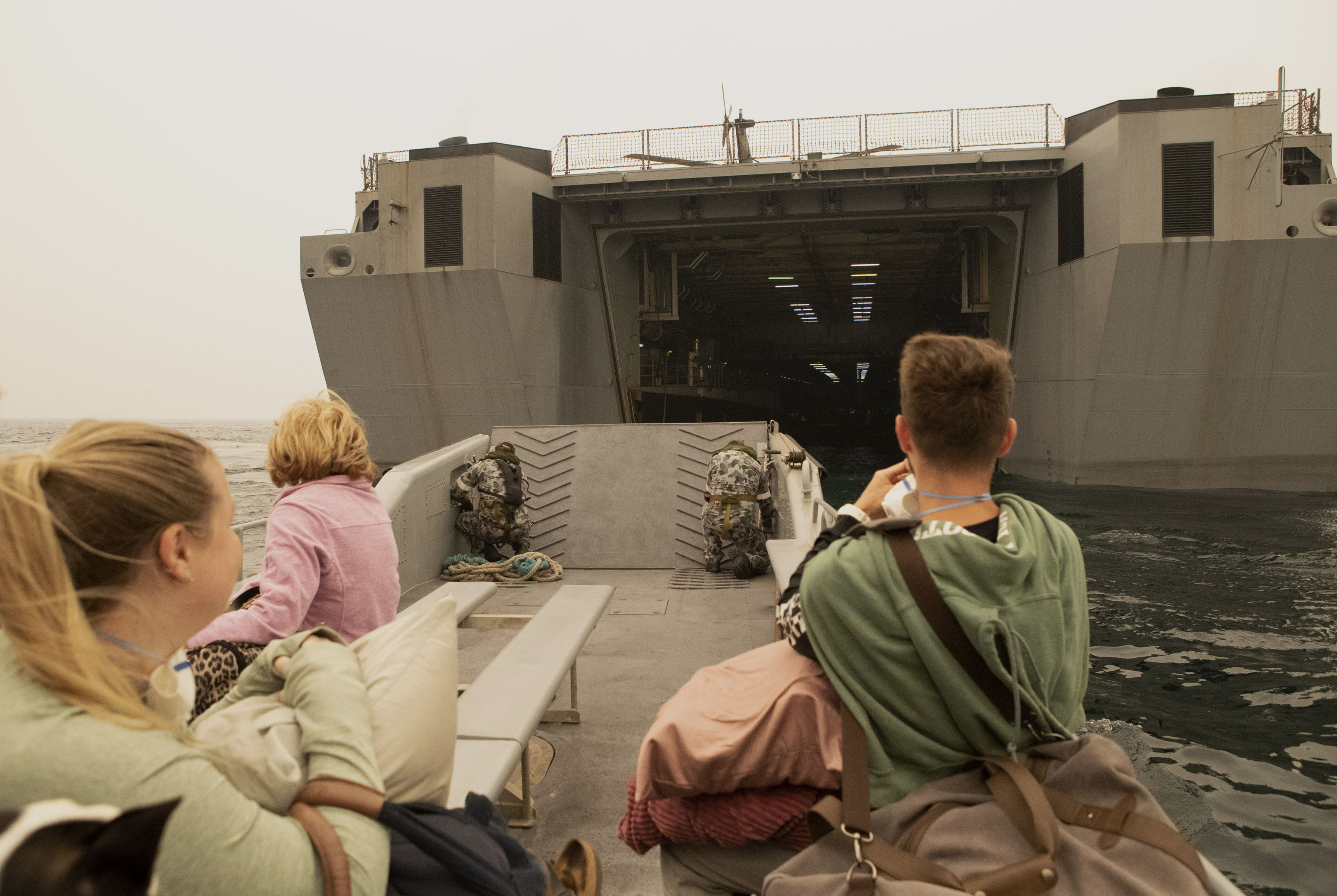 Evacuees from Mallacoota are transported to HMAS Choules on Jan. 3, 2020. RAN Photo

On Jan. 1, the RAN deployed an amphibious ship HMAS Choules (L400) and the multi-role aviation training ship MV Sycamore to assist in the evacuation of the large tourist resort Mallacoota on the southwest coast of the state of Victoria.

Choules is a former U.K. Royal Fleet Auxiliary Bay-class landing ship dock sold to Australia and commissioned into the RAN in late 2011. Sycamore entered service in 2017 and is operated by marine services company Teekay Australia.

Both ships departed Fleet Base East in Sydney on New Year’s Day and arrived in Mallacoota on the second of January. In the preceding days the fires had crept towards the town and as the winds changed it eventually cut off access over land. Supplies were running low and the emergency services were unable to sustain deliveries of enough food and water using police boats and helicopters. 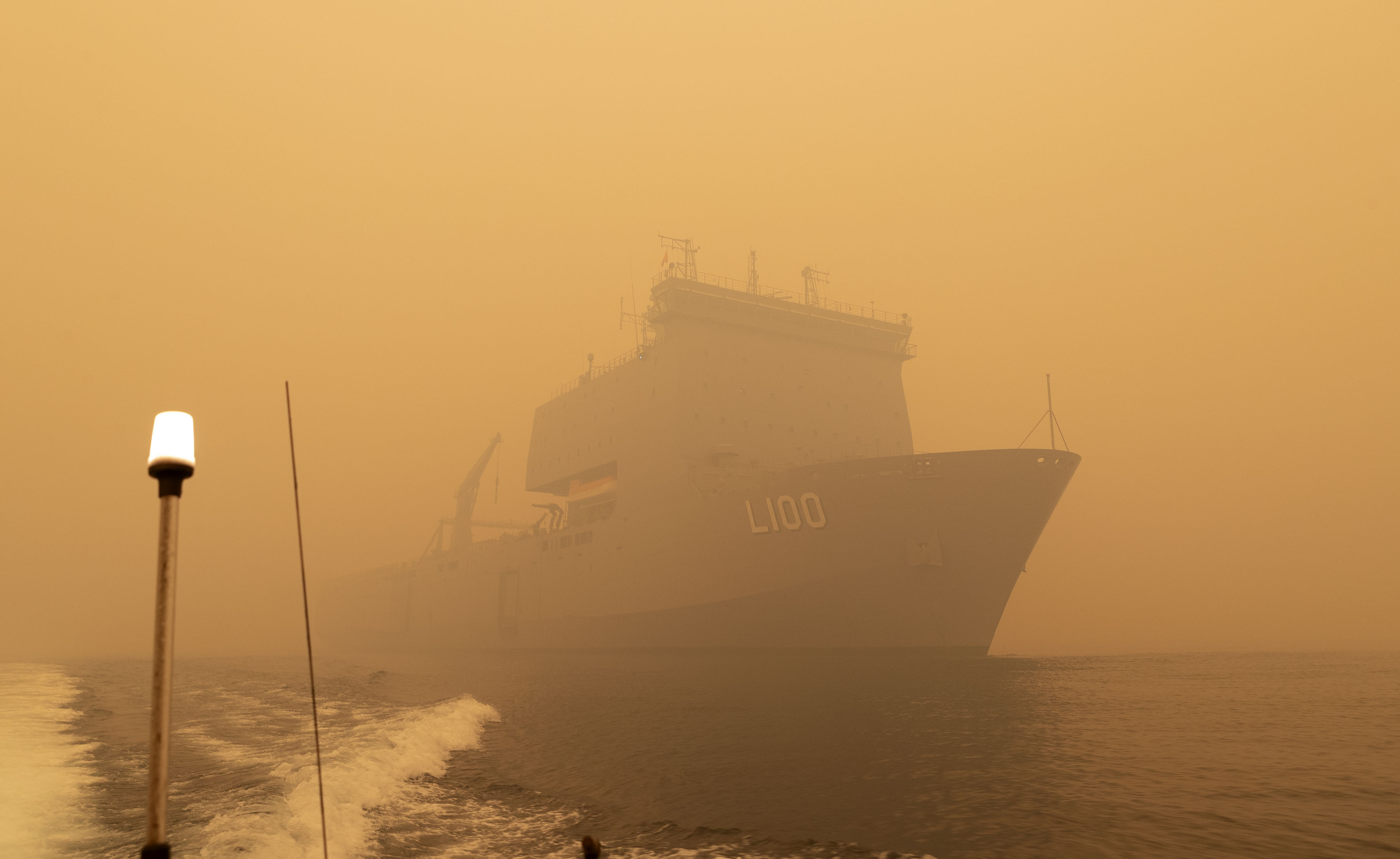 HMAS Choules off the coast of Mallacoota, Victoria during the bushfire crisis on Jan. 3, 2020. RAN Photo

Choules has a crew of 179 and substantial storage and transport capacity. Its deck space would normally be used to house the Australian Army’s Abrams tanks, trucks and its 200-ton of cargo capacity for ammunition and weapons. It also has accommodation for up to 700 personnel. Choules also has a well dock that can host landing craft, including two seven-ton Landing Craft, Vehicle and Personnel (LCVP), which can sail straight out of the stern to the landing zone as well as a flight deck that can receive helicopters as large as a Chinook.

For this rescue scenario, the ship was instead used to deliver food, water, humanitarian supplies and engineering services to the town and its LCVPs were deployed to bring evacuees from the shore to the ship. ADF officers have been liaising with state authorities and officials on the ground in Mallacoota and over the course of Jan. 3, a total of 1,100 evacuees boarded the two LCVPs and the Australian Army’s amphibious Light Amphibious Replenishment Cargo vehicle (LARC V) to be taken to Choules, where they were received by the ship’s crew to be given medical assistance and any care required. 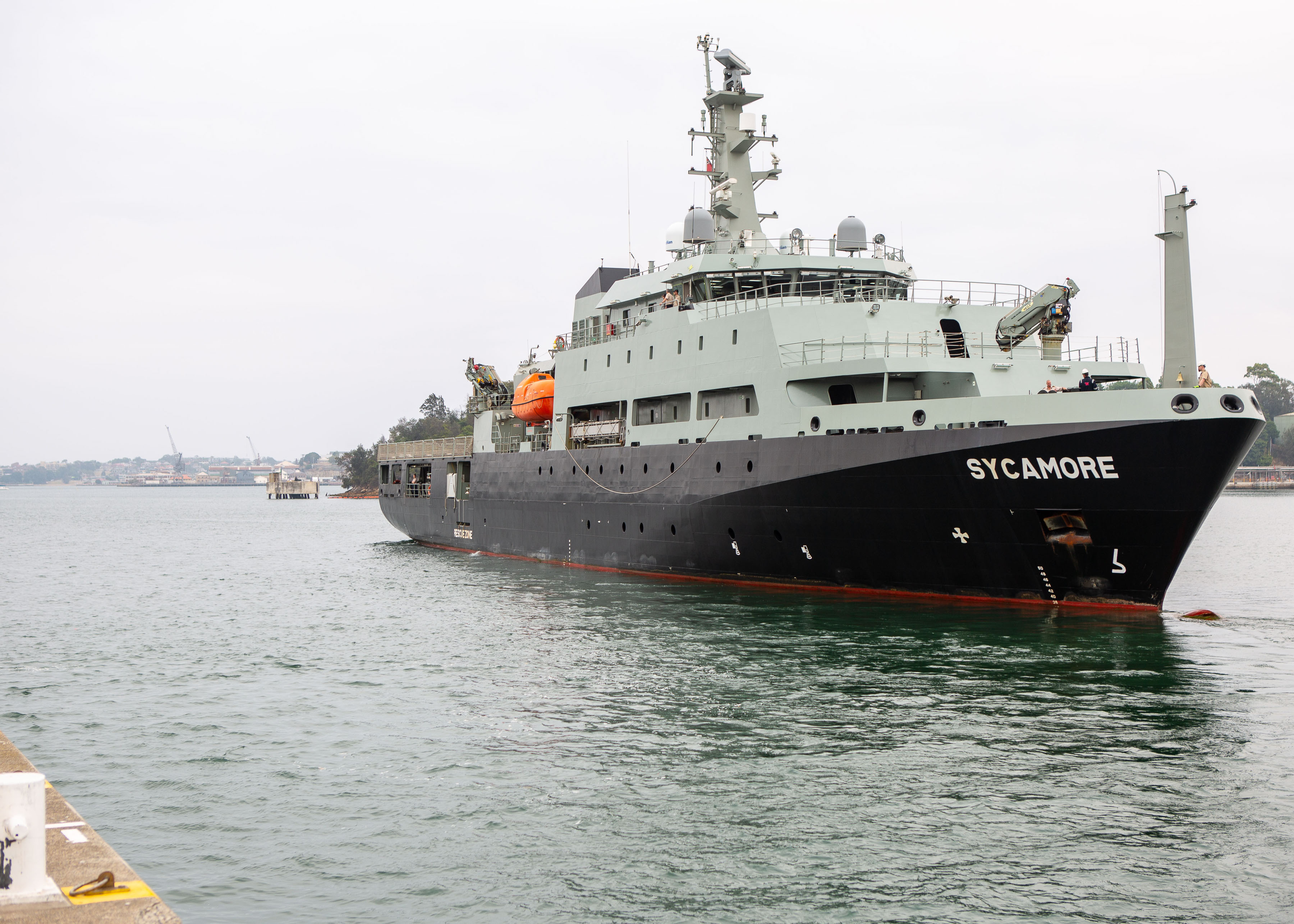 Meanwhile Sycamore assisted with the rescue of an additional 60 people. The ship is 94m-long and is based on the OPV 2400 design from Damen with a displacement of 2,400t. It has a hangar and flight deck as part of its aviation training role, it is equipped to operate unmanned aerial vehicles and has a multi-mission bay that can be tailored for disaster operations as well as accommodation for 70 personnel.

Over the next 20 hours these ships delivered the evacuees to safety in Westernport further south in Victoria. The ships will return to Mallacoota to continue to support the relocation of vulnerable and high priority evacuees.

Meanwhile, on Jan. 5, the ADF announced its naval support to Bushfire Assist would be increasing with the deployment of its largest amphibious ship HMAS Adelaide is to begin relief and evacuation operations under JTC 646 off the coast of Eden in NSW just north of Mallacoota. 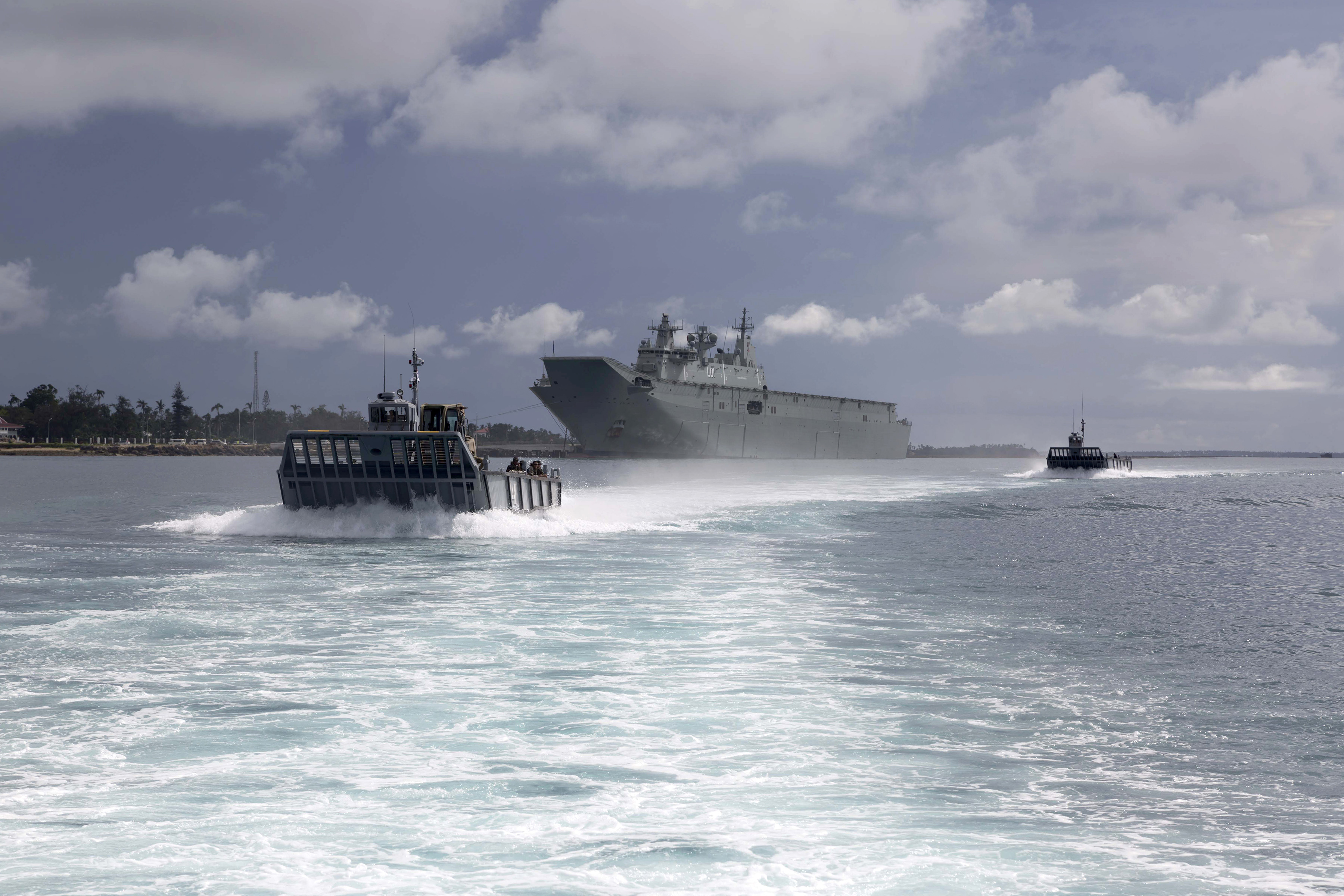 Adelaide is a 27,000-ton, 230m-long amphibious landing helicopter dock (LHD) ship that entered RAN service in 2016. Its facilities are even more extensive than Choules with two vehicle decks providing accommodation for over 1,000 personnel, hangars with the ability to carry up to 18 helicopters and a well deck that can carry four landing craft.

Adelaide is carrying “400 personnel, including the crew, logistics and engineering capabilities as well as 300 tons of relief supplies” that will be used in areas that become inaccessible by land.