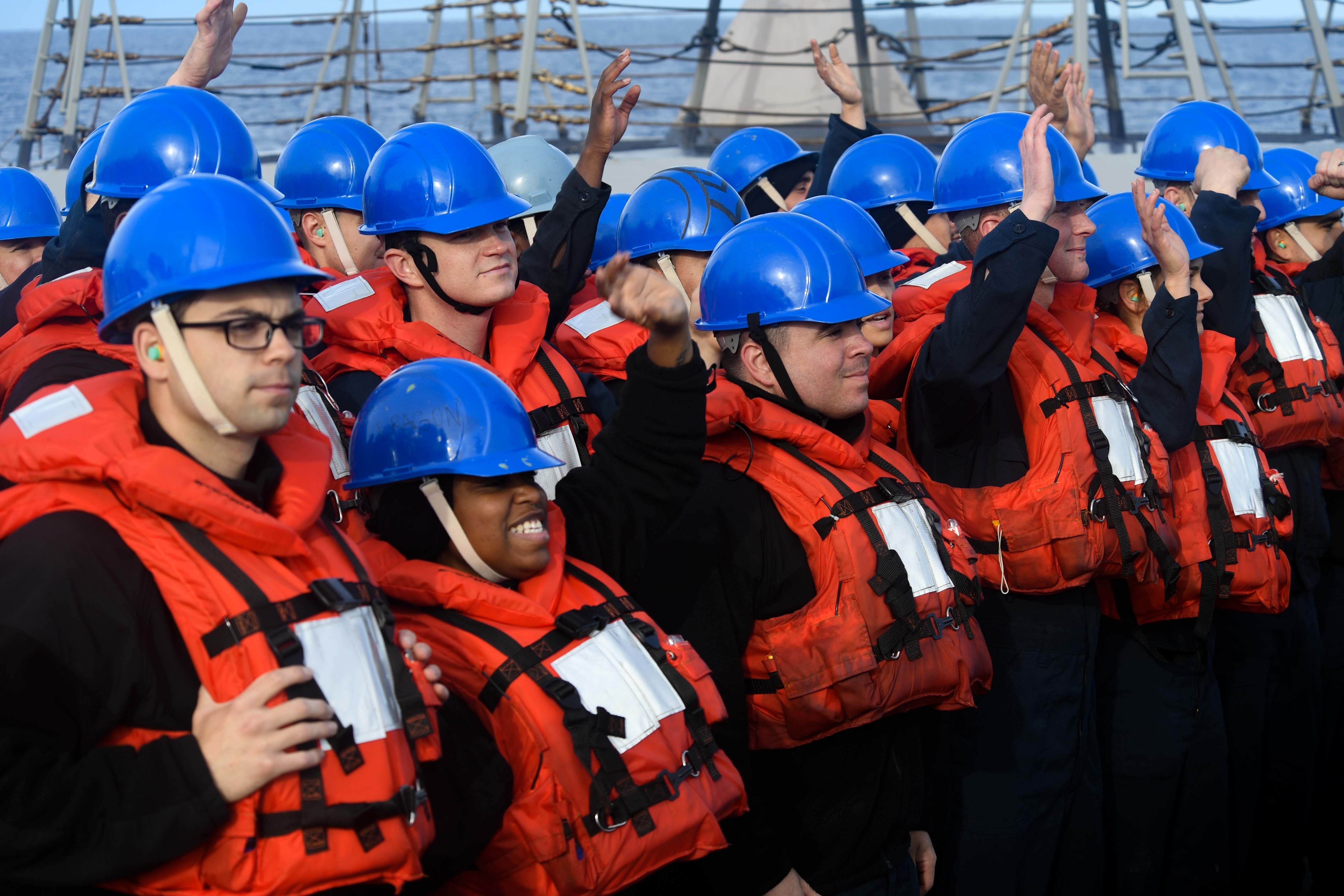 Sailors aboard the Arleigh Burke-class guided-missile destroyer USS Pinckney (DDG-91) wave to sailors aboard the aircraft carrier USS Theodore Roosevelt (CVN-71) after completing a fueling at sea on Dec. 6, 2019. US Navy Photo

The Navy launched a new online detailing program to bring more transparency, choice and control to the process that places the service’s more than 277,000 enlisted sailors in their next billets, officials told USNI News.

MyNavy Assignment, the online detailing tool that went live last week, represents the most significant update to the Navy’s enlisted detailing process in more than a decade.

The system’s first big detailing test comes on Dec. 27, when more than 18,000 enlisted sailors nearing the end of their current orders enter their detailing window to apply for their next jobs, according to the Naval Personnel Command.

However, all active-duty enlisted personnel can explore the site now, see when billets will open, bookmark jobs to review later and discuss jobs with their detailers. Until now, sailors could only see job openings when they were inside their detailing windows.

“We believe by being more transparent with sailors … there’s more things we can tell about that sailor just by looking at the way they are applying, the preferences they put in there,” Force Master Chief Scott Rossiter, from Naval Personnel Command, said during a media briefing.

Among the improvements, sailors using MyNavy Assignment can see an expanded list of all available vacant jobs and soon-to-open jobs. The new system increases to seven from five the number of jobs sailors can apply for during detailing and uses expanded job search filters such as the following categories: “all jobs,” “my preferences,” “bookmarks,” “saved searches,” “by qualifications” and by “rate.”

“We continually strive to make the process easier for sailors to select their next assignment and better manage their careers. More than ever, we need our fighting force to focus on developing and maintaining the skills necessary to win the high-end fight and believe the release of MyNavy Assignment is a critical initiative that will help achieve this goal,” Vice Adm. John Nowell, the commander of naval personnel, said in the NAVADMIN announcing the site.

MyNavy Assignment replaces the Career Management System/Interactive Detailing (CMS/ID). The old enlisted detailing process traced its history back 13 years when the Navy moved away from an older version of the detailing system, according to the Navy.

The new detailing system does more than make the detailing process easier for sailors, Rossiter said. Ultimately, Navy officials plan to use data about easy- and hard-to-fill billets to better match sailor preferences with the needs of the Navy.

For example, under the “my preferences” job search filter, sailors prioritize up to five job preferences. Sailors can let their detailers know what they consider most important about their next set of orders, such as location, platform type, rating, command and sea or shore duty.

“We can better help overlap what the sailor wants and what the Navy needs,” Rossiter said. “We’re hoping to make a bigger overlap of those two things and then hopefully steer people to where they’re most qualified. And that benefits both the sailors, keeping them happy, and keeping the jobs filled.”

The “bookmarks” – where sailors highlight jobs they’re interested in considering in the future – are important for two reasons, Rossiter said. Sailors can keep track of future openings and work toward earning the proper qualifications to be competitive. Also, detailers can get a sense of what jobs interest their sailors. Plus, if there’s a situation where a job needs to be filled immediately – a hot fill – detailers can access the resumes of every sailor who bookmarked the job and contact those sailors to ask if they’re interested in applying.

The new commands also will benefit from the new system, Rossiter said. The new command’s personnel officer now has more information about who is applying for jobs, their backgrounds, their skill sets and credentials. Sailors also have space to enter what amounts to a sales pitch, to highlight achievements that a listing of past jobs and qualifications may not make obvious to personnel officers or detailers.