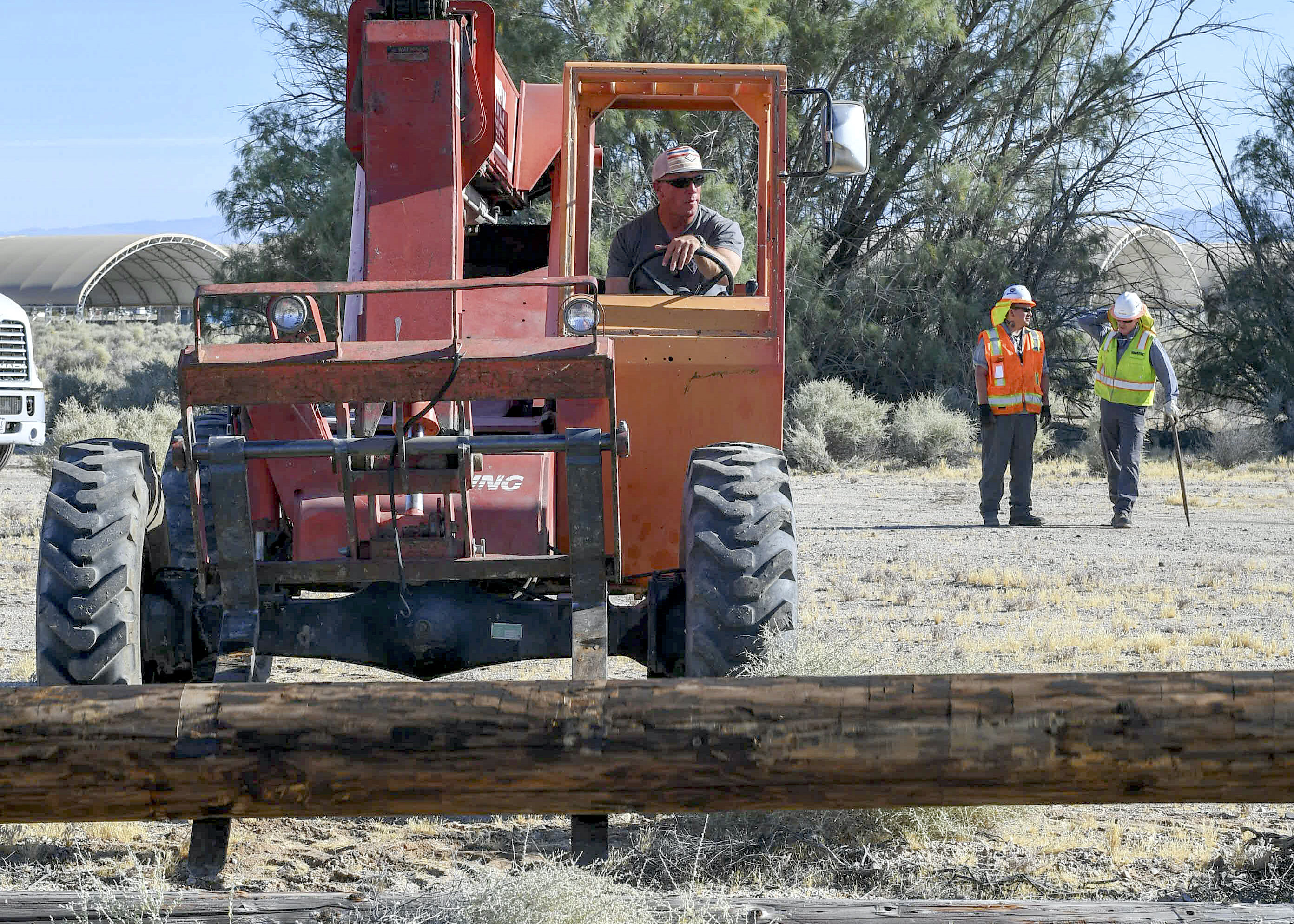 The service got its hands-on 33,096 acres of public lands that abut South Range, which houses the NAWS Weapons Division’s electronic warfare range complex that is a critical part of China Lake Land Ranges. The expansion includes the former Air Force Cuddeback Air-Gunnery Range, federal public lands that through congressional actions in 2015 and 2016 were transferred to the Navy to support a decision to boost operations at China Lake’s vast land range complex by 25 percent. The Air Force had returned the 2,800-acre gunnery range, 20 miles southeast of the city of Ridgecrest, to the U.S. Bureau of Land Management in 2012.

In late July, Navy Region Southwest officials in San Diego determined the Navy’s planned uses for the Cuddeback Range lands would have “no significant” environmental impacts and decided there was no need to do a more extensive environmental impact statement review. The expansion lands are adjacent to public recreation and conservation lands, including Grass Valley Wilderness Area and critical habitats for the endangered desert tortoise and the protected Mojave ground squirrel. 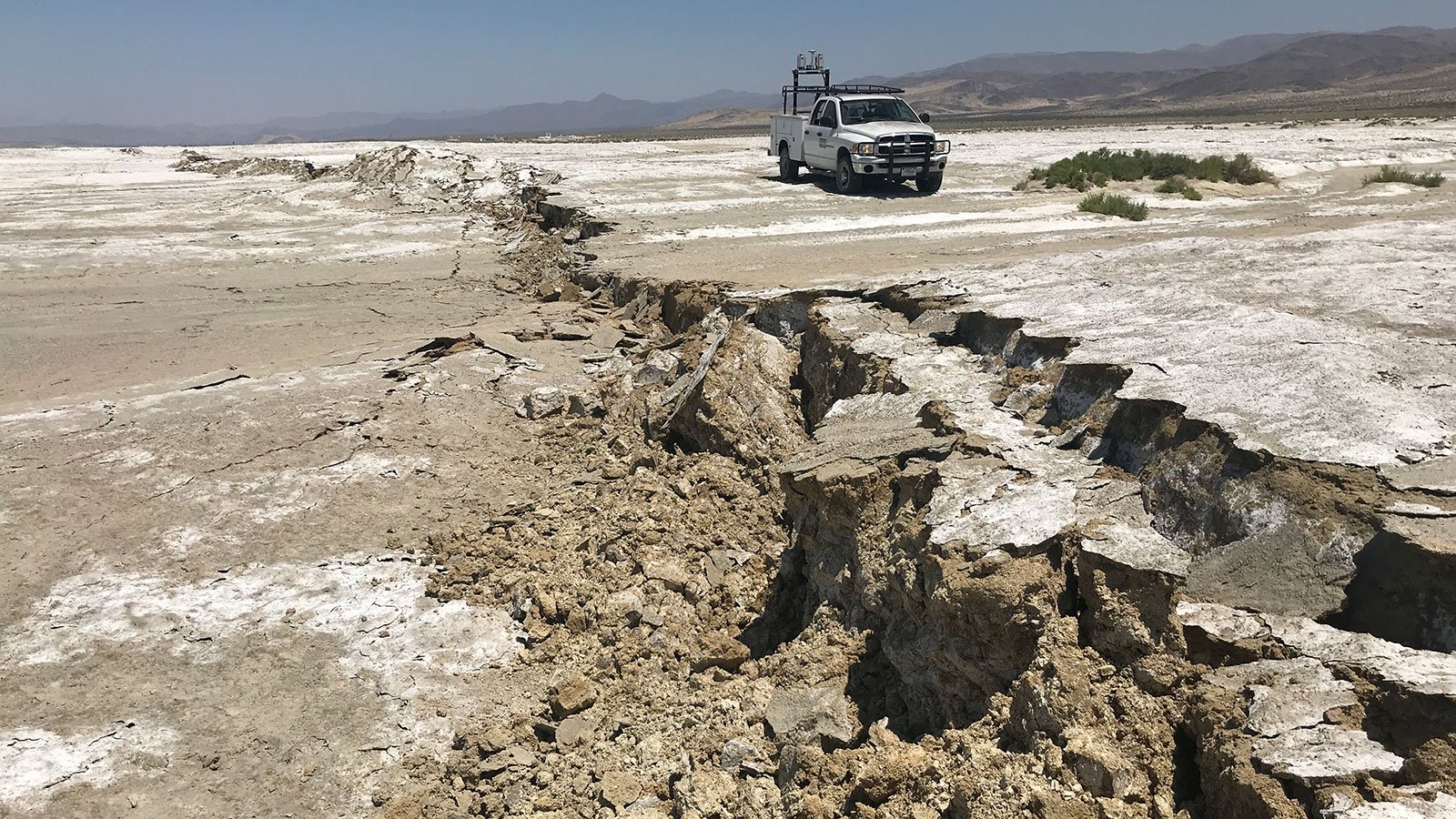 Faultline on China Lake on Oct. 17, 2019. US Geological Survey Photo

The finding of no significant impact, FONSI, decision opens the door for the Navy to expand limited activities at Cuddeback Range, Rear Adm. Bette Bolivar, the Navy Region Southwest commander, wrote in the July 30 decision the Navy announced in mid-August. The move is needed to “expand and improve the Navy’s capacity to execute full-spectrum weapons and warfare systems… to be responsive to theater-relevant warfighting requirements and capabilities, and to ensure necessary training readiness, while meeting safety and security requirements.”

Those activities, according to the FONSI, include: “test and evaluation of unmanned systems, miniature munitions, expeditionary/irregular warfare, ground troop training (GTT) and integrated warfighting capabilities at test sites located within the Cuddeback Range at NAWSCL, adjacent to existing research, development, acquisition, test and evaluation (RDAT&E) operations” at the South Range.

To accomplish that, officials wrote, the Navy plans to construct perimeter fencing and build a new access road that links the Cuddeback Range to the South Range, as well as install or provide mobile structures, generators, communications equipment and connectivity to instrumented targets at Cuddeback.

China Lake, next to the desert town of Ridgecrest 150 miles north of Los Angeles, is the Navy’s largest single landholding. Its vast, instrumented ranges and laboratories support a significant amount of military weapons research, development, testing and operations.

It’s also in a seismically active region. The major earthquakes that struck – registering magnitude 6.4 on July 4 and magnitude 7.1 on July 5 – caused more than $4 billion in damages to facilities and infrastructure that affect some operations and will take years to restore. Both quakes’ epicenters occurred on the North Range, near the Skytop propulsion facility for rocket motor testing, according to U.S. Geological Survey data maps.

Officials have said little publicly about how damage to buildings, laboratories and other facilities including instrumented ranges are affecting or limiting scheduled operations, training, testing and evaluation at the large weapons station. Some operations have continued, including explosive operations this week slated to occur during several days at the North Range, according to a weapons station’s Facebook posting.

Among the reported impacts is a delay in an initial flight demonstrating an air-launch-and-recovered swarming drone concept that had been planned for last month at China Lake. Dynetics, Inc., a science and technology firm based in Huntsville, Ala., expected its initial flight test of the Gremlins Air Vehicle (GAV) to occur in September at the weapons stations’ air ranges. The test of the small, reusable unmanned vehicles operating with a C-130 transport aircraft is part of the Defense Advanced Research Projects Agency’s Gremlins program under a $38.6 million contract for the demonstration phase. 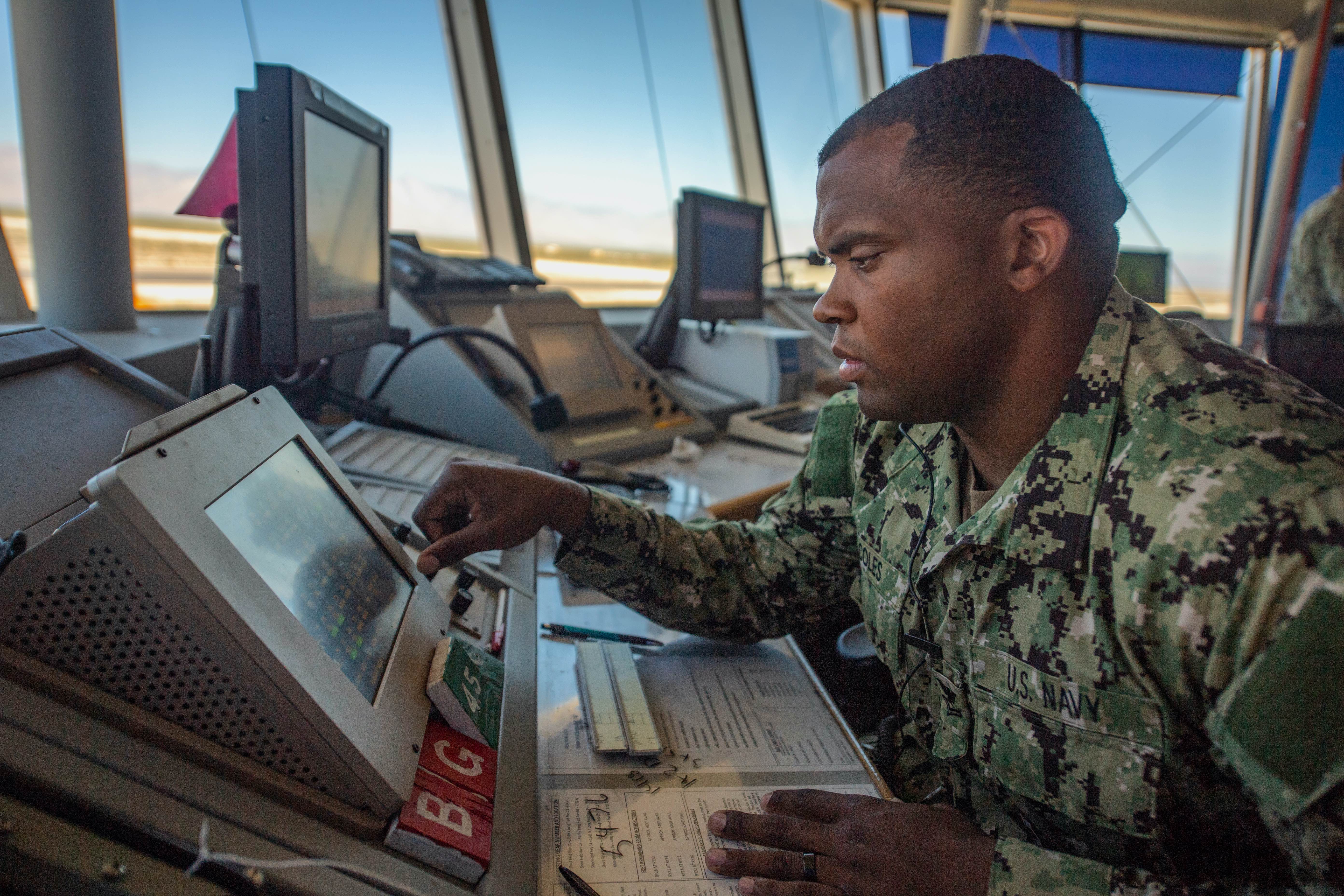 Dynetics’ Gremlins program manager, Tim Keeter, told Air Force Magazine last week the September test instead might be done at the Army’s Dugway Proving Ground in Utah before year’s end. The earthquake damage at China Lake has “limited range access,” Keeter told the magazine. “They’ve got a lot of damage that’s been done. They’ve got a lot of things to take care of in terms of infrastructure before they can support a flight test … like this.” Damage to flight termination system equipment used for testing at China Lake prompted the delay, he told FlightGlobal last month.

Hangar 3, the largest at the weapons station’s Armitage Airfield, sustained damage, and an initial set of contracts worth nearly $778,000 will tackle immediate repairs, hazards and water damage, according to NAVFAC Southwest. Another $830,531 will fund repairs to Hangar 1 and the Navy Exchange and commissary. A $855,075 contract will help in shoring the buildings at the famed Michelson Laboratory complex, which sustained much damage.

About $816,000 is slated for road repairs, which include damage to G2 Tower Road, Randsburg Wash Road in the South Range and roads at the weapons station’s magazine area, which was near the epicenter and sustained heavy damage. The Navy also issued $1.07 million for temporary facilities to support air operations, the main magazines and the base gym, $693,447 for minor repairs to 25 buildings, and another $600,000 to cover emergent electrical service calls.

Included in the contracts listing was $3.87 million for renovations at Murray Middle School, $939,232 for new athletic field lights and $312,519 for “Schoeffel Field light demo.”

The proposed Fiscal Year 2020 defense appropriations budget would send $585 million to the Navy for repairs at NAWS China Lake, according to Sen. Dianne Feinstein, (D-Calif.). The money is among some $1.17 billion in emergency funding to cover repairs to Department of Defense facilities damaged or destroyed by the earthquakes, two major hurricanes and Midwestern spring flooding that struck that all occurred within the past year. It wasn’t immediately clear which China Lake projects would get funding.

“These funds are a much-needed first tranche of what will ultimately be needed to repair the nearly $4 billion worth of damage the base sustained,” Feinstein said in a statement last month announcing the funding. The money would “repair existing structures and replace specialized equipment damaged by the disaster.” 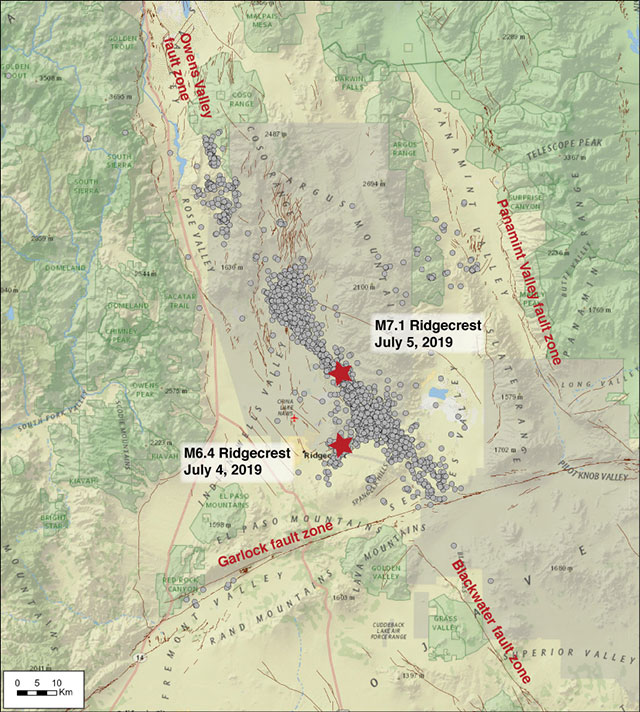 The China Lake base “is a one-of-a-kind facility that’s crucial to the Navy’s mission. I am told there are no other options but to rebuild China Lake,” she said. “A total of 230 buildings were damaged, of which 84 need to be rebuilt completely. These initial funds will start repairs while we work to secure additional funds for the buildings that need to be rebuilt.”
Swarms of smaller quakes continue to shake the region, including along two faults that crisscross through NAWSCL land. The temblors confound seismologists studying the quakes – the strongest to hit Southern California in two decades.

On Thursday, geophysicists from the California Institute of Technology and NASA’s Jet Propulsion Laboratory expressed concerns about further quakes along the major fault lines, including the previously inactive Garlock Fault zone that runs across the north part of the South Range. “The Ridgecrest sequence involved about 20 previously undiscovered, smaller faults crisscrossing in a geometrically complex and geologically young fault zone,” officials said in announcing findings of a study into the Ridgecrest quakes and published in the journal Science.

International satellite data provided in-depth, detailed analysis of the aftershocks – more than 100,000 have been recorded since the July 5 quake – and surface ruptures. The scientists reported that the Garlock fault “has slipped 0.8 inches (2 centimeters) at the surface since July, according to the announcement.