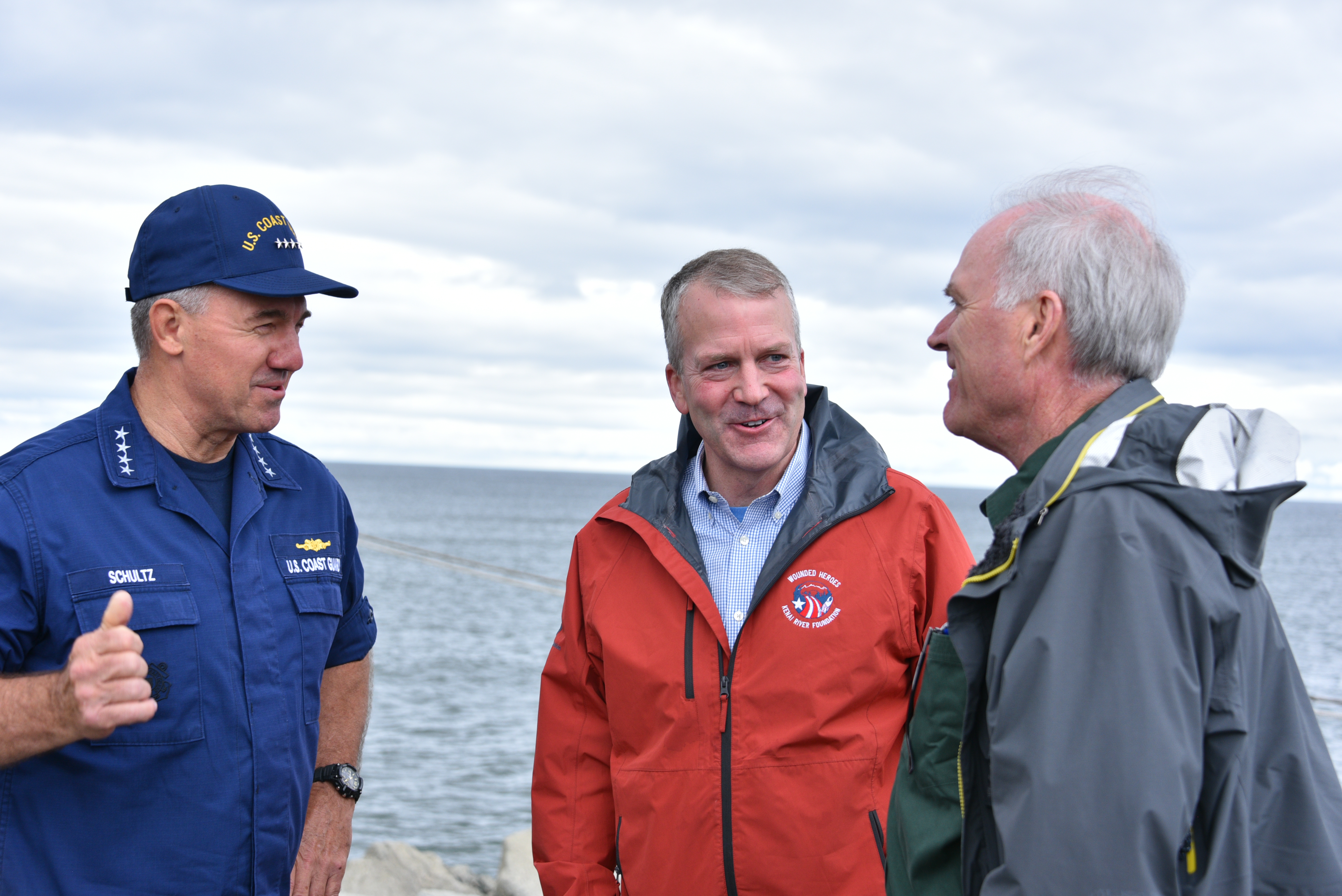 WASHINGTON, D.C. – For now, the Coast Guard is focused on being sea-based in the high latitudes even as talk of building a deep-water Arctic port gains support in Washington.

On Capitol Hill, Alaska’s lawmakers have for years highlighted the attributes for building a deep-water port in the Arctic. Retreating ice in the region is causing maritime traffic to increase as mineral resources are newly accessible. Lawmakers also cite an uptick in Russian Arctic activity as increasing the strategic need for such a facility.

For the Coast Guard, a proposed fleet of six heavy icebreakers will provide the service with the resources needed to fulfill its Arctic missions, Adm. Karl Schultz, the commandant of the Coast Guard, told USNI News after an speaking at an event co-hosted by the Center for Strategic and International Studies and the U.S. Naval Institute.

“Karl Schultz’s view, as 26th commandant: we will sea-base our Alaska operations moving towards the Arctic,” Shultz said.

The idea of establishing a deep-water Arctic port is something Schultz said merits discussion. However, he explained such discussions should involve several government entities, including Congress, the U.S. Army Corps of Engineers, the Department of Defense, and Alaska state agencies.

Deep-water Arctic port proposals have circulated around Washington for at least two decades, according to a U.S. Army Corps of Engineers 2015 draft report. A deep-water Arctic port is needed to accommodate predicted increased commercial maritime traffic, the report states. The report also spells out strategic reasons for the military to support the proposed port. 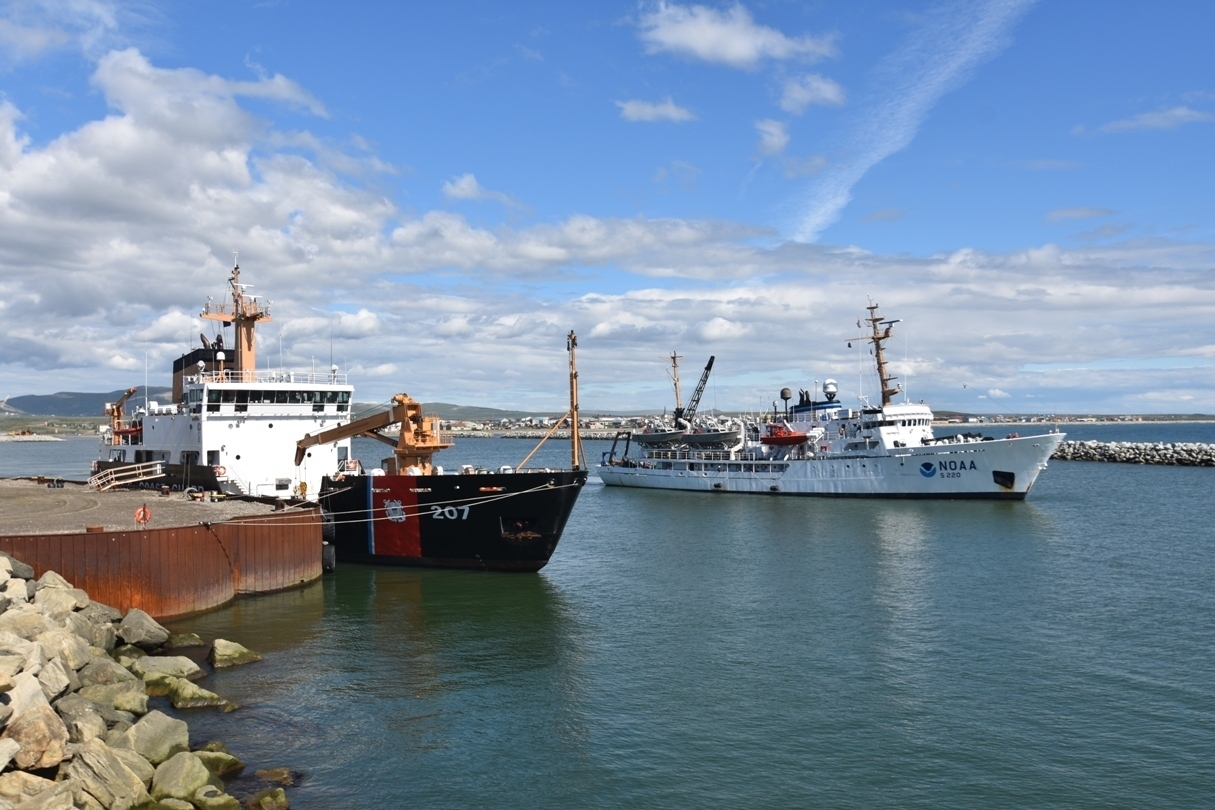 The Coast Guard Cutter Maple (WLB 207) moors up at the Port of Nome during a brief logistics stop in Nome, Alaska, during the cutter and crew’s voyage up through the Northwest Passage, July 18, 2017. Coast Guard photo

“The U.S. Coast Guard anticipates commissioning four new icebreakers during the course of this study’s analysis period, none of which could access Nome (in Western Alaska, near Russia) under current conditions,” the Army Corps of Engineers report states.

On Capitol Hill, Sen. Dan Sullivan (R-Alaska), a long-time proponent of building an Arctic port, is often the lawmaker facilitating such discussions. For example, during Mark Esper’s Senate confirmation hearing to become secretary of Defense, Sullivan asked Esper to commit to considering support the Arctic port. Sullivan’s reasoning was strategic.

“Putin’s talking about the Arctic as the new Suez Canal, and that they’re going to control. And we had a provision in this year’s NDAA that just said America should have a port, which it doesn’t have right now, that could handle resupplying a destroyer – not even an aircraft carrier in the Arctic,” Sullivan said during the July hearing.

In the summer of 2018, Sullivan hosted Secretary of the Navy Richard V. Spencer and Schultz, who had just become Coast Guard commandant, on a trip to visit Nome’s current port facility. Nome is one of the most likely locations for building a deep-water Arctic port, according to the Corps of Engineers report.

Following the trip, Spencer started working support of a deep-water Arctic port into his public speeches. The strategic value of the port is his reasoning for Navy support of the project.

“We need to have a strategic Arctic port up in Alaska. We need to be doing FONOPs in the northwest – in the northern passage. We need to be monitoring it. We have cruise ships going up there,” Spencer said during a December 2018 appearance at an event co-hosted by CSIS and the U.S. Naval Institute.

The Coast Guard has more pressing needs, such as fielding its long-planned heavy icebreaker fleet. The service has one working heavy icebreaker, USCGC Polar Star (WAGB-10), which is primarily used to lead supply convoys to the National Science Foundation’s research facility in Antarctica. For Arctic missions, the Coast Guard leans on its medium icebreaker USCGC Healy (WAGB-20).

The new fleet of icebreakers will enhance the Coast Guard’s ability to accommodate more science missions, run search and rescue operations and provide a sustained presence in the Arctic, according to a September Congressional Research Service report.

In April, the Coast Guard awarded VT Halter Marine a $745.9-million contract to build the service’s first heavy icebreaker in more than four decades, the Polar Security Cutter. Delivery is expected in 2024. The Coast Guard keeps Polar Star working by cannibalizing parts from a second heavy icebreaker, USCGC Polar Sea (WAGB-11), which suffered a catastrophic engine failure that cannot be repaired. Once a second PSC is delivered, the Coast Guard plans to retire Polar Star.

The Coast Guard is part of the discussion on building a port, but Schultz said, “right now, we’re focused on building capability.”