The Navy’s next-generation attack submarine program may cost $69 billion more than the service is planning to spend, according to a Congressional Budget Office estimate released this week, creating a major delta between the Navy’s long-term shipbuilding cost estimates and CBO’s.

In what appears to be the first public cost estimate for the SSN(X) program that would follow the Virginia-class SSNs, the Navy pegs SSN(X) costs at $3.4 billion per boat while CBO estimates $5.5 billion apiece. If the CBO estimate were correct, the Navy would be spending more than 60-percent more per hull than initially planned. Some of this comes down to the size of the future sub: CBO argues the Navy will need a bigger boat to meet the mission it has outlined for SSN(X).

According to documents accompanying the Navy’s Fiscal Year 2020 budget and associated long-range shipbuilding plan, CBO notes, the Navy “envisions a submarine that would be more capable than the Virginia in many respects but without the [Virginia Payload Module that adds more missile tubes]. Specifically, the Navy indicates that the next-generation attack submarine should be faster, stealthier, and able to carry more torpedoes than the Virginia class—similar to the Seawolf-class submarine. CBO therefore assumed that the SSN(X) would be a Seawolf-sized SSN, which displaces about 9,100 tons when submerged, and would have an all-new design in keeping with the Navy’s description of it as a ‘fast, lethal next-generation attack submarine,’” according to the report.

In comparison, the Virginia class without the VPM displaces about 7,800 tons and costs about $2.8 billion apiece; the sub with VPM will cost about $3.2 billion, though the contract is still being negotiated. This means the Navy is assuming SSN(X) will cost just marginally more than its Block V and beyond Virginia-class SSNs despite the increased capability they plan to add to the design.

“On the basis of those assumptions, CBO estimates that the average cost of the SSN(X) would be $5.5 billion per submarine, whereas the Navy estimates the cost at $3.4 billion per submarine. That difference amounts to $69 billion and accounts for more than a third of the difference between CBO’s estimate and the Navy’s estimate of shipbuilding costs” between Fiscal Years 2020 and 2049, the report continues.
“The large difference between the Navy’s and CBO’s estimates under the 2020 plan suggests either that the Navy’s cost estimates may be optimistic in light of the SSN(X)’s proposed capabilities or that the two estimates relied on widely different assumptions about the submarine’s size, capabilities, and design. As a result, the SSN(X)’s final capabilities and costs are highly uncertain.”

The Navy is nearing the start of its fifth block of Virginia-class subs, which have become progressively easier and cheaper to build and maintain over time, and will be more capable with the Virginia Payload Module and the 28 additional missile tubes it gives the sub. However, Navy officials have acknowledged that they’re butting up against the limits of the hull design as they look to integrate unmanned vehicles, undersea and seabed warfare tools and more for the submarine community. The move to SSN(X) – coming as the Navy shifts from a focus on land-attack missions to a renewed focus on high-end blue-water warfare – would give the Navy a more capable and stealthy submarine that can also leverage these news unmanned vehicles, sensors, networks, weapons and more to set the Navy up for success in this new era of warfare. 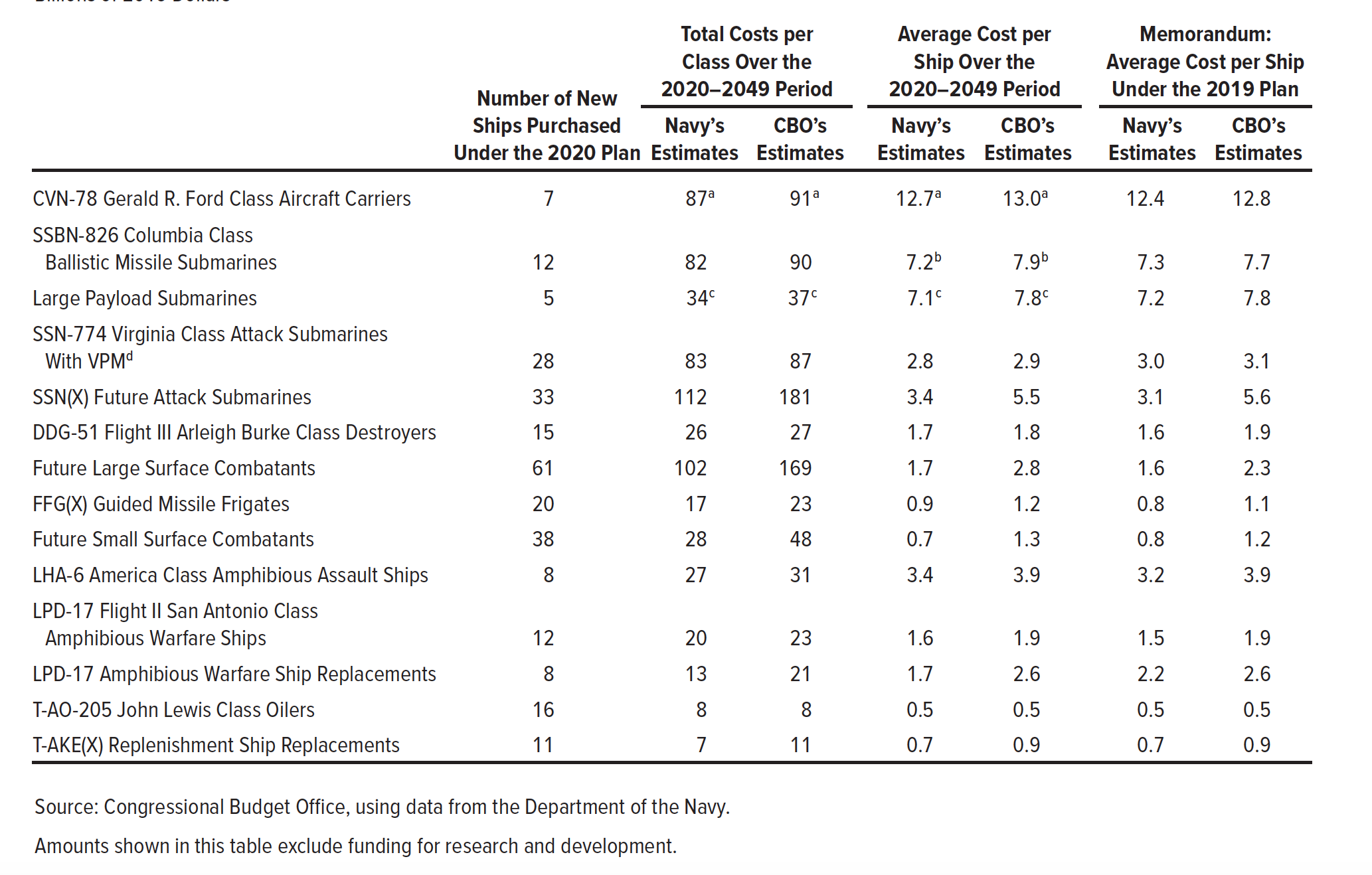 Another big question mark in the Navy’s long-term shipbuilding plans is the Large Surface Combatant. The Navy has also been vague on what it wants out of this ship, which will not be a direct replacement for a cruiser or a destroyer but will rather fit into a family of ships concept that includes a large manned combatant, a small manned combatant, and medium and large unmanned surface vessels. Service officials have told USNI News that they’re running out of margin to add new weapons, radars and other capabilities to the Arleigh Burke-class of DDGs and have also said they like the stealth capability of the Zumwalt-class destroyers, but they have not committed to using either as the parent design for the future Large Surface combatant.

According to CBO, “the Navy says that it would buy 61 of the new LSCs through 2049 at an average cost of $1.7 billion—the same price as the Navy’s estimate for the average cost of a DDG-51 Flight III ship. … That estimate implies that the new LSC would be either a destroyer-sized ship with capabilities that represent only a modest improvement over the DDG-51 Flight III or a smaller ship with significantly improved capabilities based on new design technologies,” neither of which fits with what Navy officials have told USNI News.

“Navy officials have said that although the new LSC would have combat capabilities equivalent to those of the DDG-51 Flight III, it would have a larger hull, substantially more power, more stealth characteristics, and a greater capacity to have new weapon systems and other capabilities installed in the future. Some Navy officials have indicated that the LSC would look more like the DDG-1000 Zumwalt class destroyer than an Arleigh Burke,” the report continues.
“The Navy’s cost estimate for the future class of LSCs suggests that it would be based on a modified version of the existing DDG-51 Flight III ship. By contrast, in CBO’s estimate the new LSC would have a largely new design and would displace 12,000 tons, or about 2,000 tons more than the DDG-51 Flight III. … Thus, CBO projects that the future LSC would cost an average of $2.8 billion, roughly 65 percent more than the Navy’s projection. Over the 2020–2049 period, CBO estimates, the Navy would need $169 billion in funding for the future LSC portion of the shipbuilding program—$67 billion more than the Navy’s $102 billion estimate. That amount represents another third of the $205 billion overall difference between the Navy’s and CBO’s estimates for the total cost of the 2020 shipbuilding plan. … The great uncertainty about the ultimate size and capabilities of the future class of LSCs suggests that the true cost could differ substantially from both the Navy’s and CBO’s estimates.” 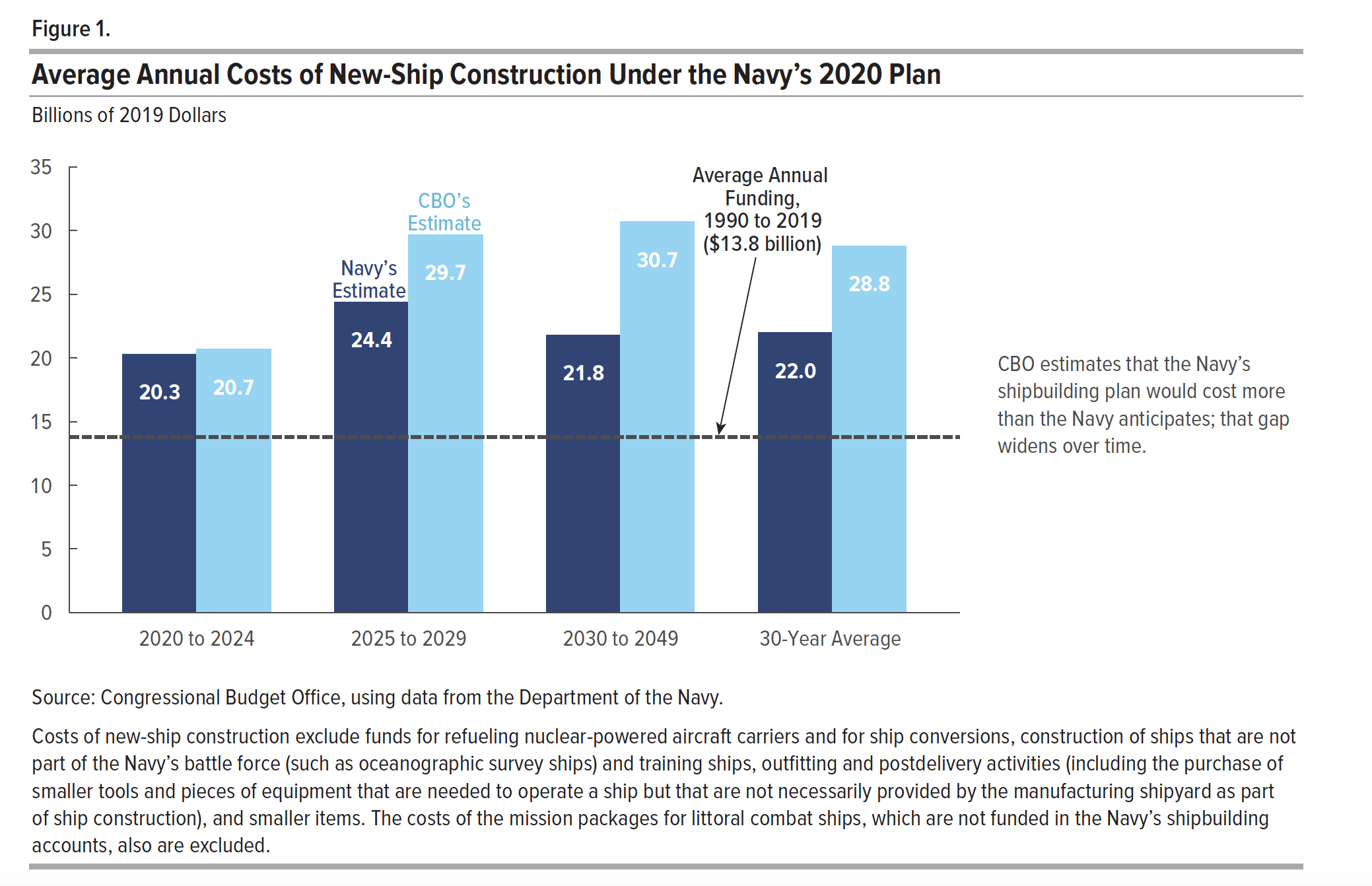 Overall, the CBO assesses risk in the Navy’s shipbuilding plans – risk in that the plans will require significantly more money than Congress has given the Navy in recent years, and risk in the potential to see costs increase even beyond what the Navy predicts.

According to CBO estimates, “the 2020 plan would require shipbuilding appropriations that are more than 50 percent larger than the Navy’s average funding for shipbuilding over the past five years. Including nuclear refueling and all other costs associated with the Navy’s shipbuilding budget, CBO estimates, the total shipbuilding budget would average $31 billion per year (in 2019 dollars), one-third more than the Navy estimates. Annual operation and support costs for the fleet over the next 30 years would grow from $60 billion today to about $90 billion by 2049.”

Much of this delta comes in later years, when the Navy will be buying fundamentally different submarines and surface combatants than it does today – meaning it can’t rely as much on current contract costs and historical data to accurately predict shipbuilding costs.

In 2019 dollars, the recent historical average of annual Navy shipbuilding costs are $13.8 billion. In comparison, between 2020 and 2024 the Navy predicts it will spend $20.3 billion a year, though CBO pegs the shipbuilding plan for those years as having a $20.7 billion cost. From 2025 through 2029, the Navy believes it will need $24.4 billion to implement its shipbuilding plan, compared to a CBO estimate of $29.7 billion. In the out years, from 2030 to 1049, though, the Navy expects to spend $21.8 billion a year compared to the CBO estimate of $30.7 billion, largely due to differing expectations of what an SSN(X) and a Large Surface Combatant will look like and therefore what they will cost.