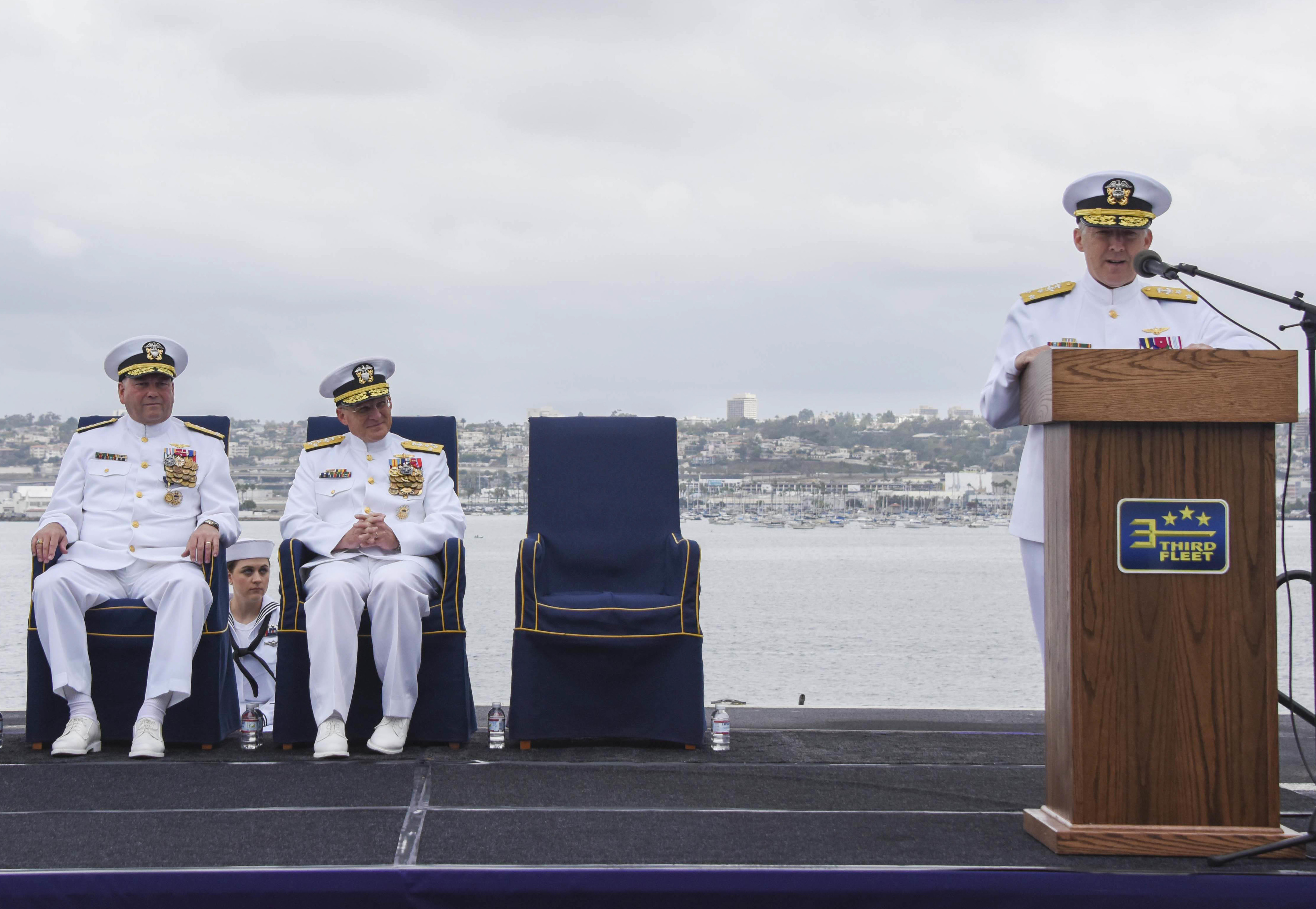 Chief of Naval Operations Adm. Mike Gilday, piled praise on Alexander, who wrapped up a two-year tour leading 3rd Fleet through a transition to bolster the fleet’s maritime warfighting capabilities. “His efforts to prepare our forces for a high-end fight… and sustain our ready force has focused the energies of a huge team towards maintaining a free and open Indo-Pacific,” Gilday said during the change-of-command ceremony, held under a haze-gray sky on the flight deck of the aircraft carrier USS Theodore Roosevelt (CVN-71).

“His high standards in certification and training ensured strike groups deployed from America’s West Coast performed at the absolute highest level,” Gilday told the crowd of several hundred. “And he was willing to think differently about the future security environment, pioneering annual operations in the Arctic in a way that we haven’t seen in a long, long time.” Those operations included Arctic Expeditionary Capabilities Exercise 2019 held this month in Alaska, the Aleutian Islands and Southern California.

Conn most recently served as the director of air warfare (N98) in the Office of the Chief of Naval Operations at the Pentagon. His leadership skills and experience from 34 years of service “make him exactly the right person to advance 3rd Fleet’s efforts even further,” Gilday said, noting that Conn’s most-recent assignment makes him “perfectly positioned to train our strike groups for employment at sea.” The CNO had promoted Conn to vice admiral earlier in the day.

“Scott is thinking differently about the future air wing and the human-machine integration that will be critical in any fight,” Gilday said, “and, as anybody knows, he’s not afraid to tell you what’s on his mind. We need candor and a clear-eyed approach to how we operate and fight.” 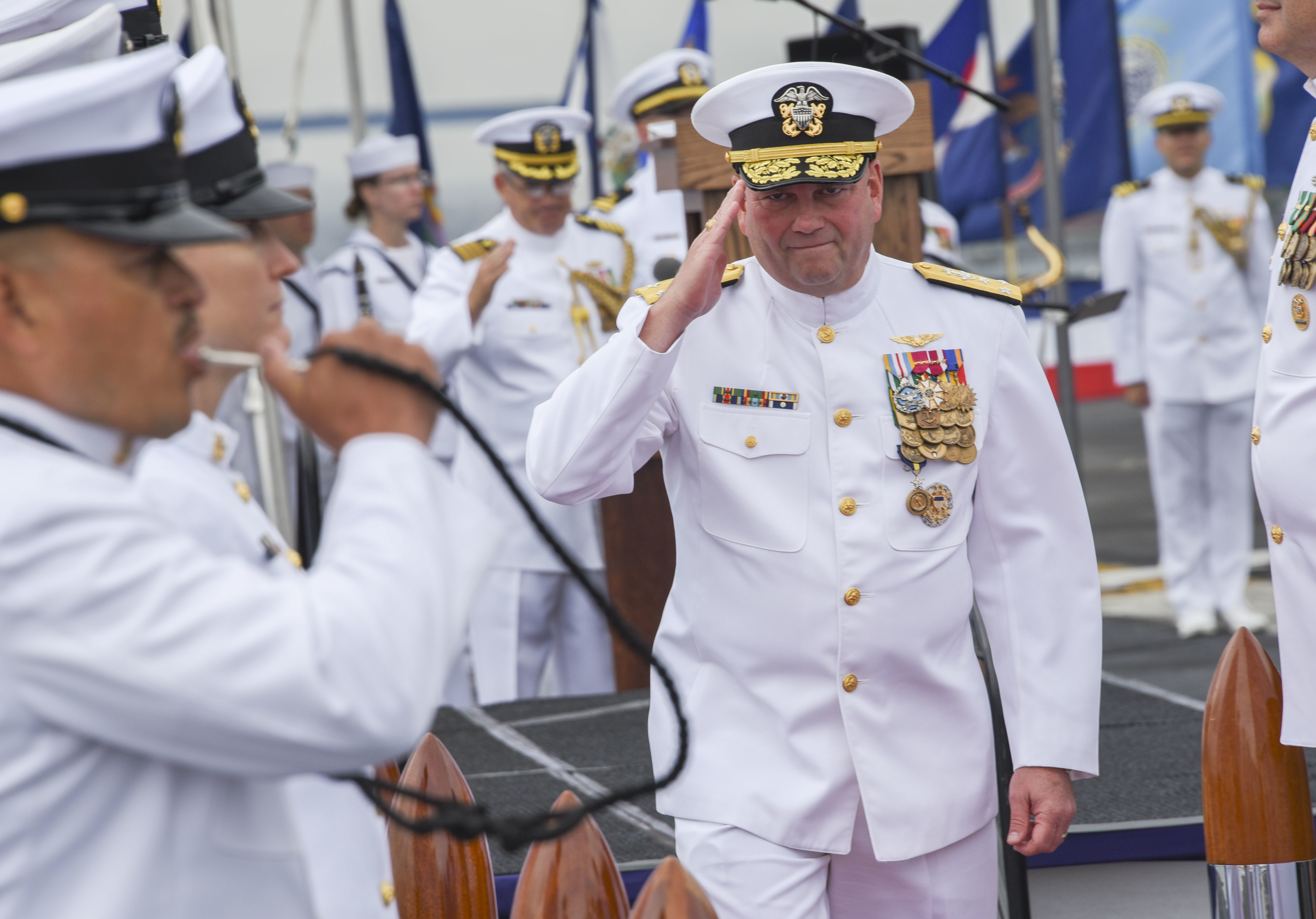 “The strategic environment will only demand more from 3rd Fleet in the future,” he added.

Alexander, a former A-6E bombardier/navigator, is retiring from the Navy after a career that included tours in command of Electronic Attack Squadron 135, amphibious transport dock ship USS Juneau (LPD-10) and aircraft carrier USS Abraham Lincoln (CVN-72). Gilday presented Alexander with a Defense Distinguished Service Medal that recognized those contributions and his 37-year career.

Alexander took command of 3rd Fleet at a time when the Navy was transitioning to a more warfighting focus. But it’s role also is one deeply rooted, since the nation’s inception, in ensuring trade that has remained the life’s blood of the United States and its economy, he told the crowd. That role continues even as the Navy has evolved over the years to provide a force that the nation needed at the time, he added, noting he’s seen “four navies” during his career.

The Navy he joined and first deployed, in 1985, was a post-Vietnam, Cold War-era force built with 1950s-1960s technology and with 600,000 sailors and a nearly 600-ship fleet. “We rode that technology into Desert Storm, and systematically disassembled the fifth-largest military in the world in a matter of, literally, weeks,” he said. Then came the post-Cold War and 9/11 Navy that shifted to support combat operations in Afghanistan and, in 2003, in Iraq with new technologies but with 200,000 fewer personnel.

The decade after 2003 saw continued Navy downsizing of another 67,000 personnel, Alexander said, and “we created a disaggregated, ground-based posture to support our Navy’s counter-insurgency strategy in the Middle East.” With the creation of Navy Expeditionary Combatant Command and a riverine force, at one point the Navy had 34,000 sailors engaged on the ground or in the littorals, more than the Navy’s entire submarine force, he noted.

By 2014, Alexander said, the Navy was transitioning again, into the service he left today. “Russia had invaded the Crimea, and nobody did anything about that. China started pouring sand into the South China Sea,” he said, “and now we are seeing a resurgent Russia and a rising China, with China being our greatest long-term strategic threat. Through excessive territorial claims that trap diplomacy, militarization of disputed geographic features, China aims to control world trade and finance and politics and, ultimately, the way of life in Southeast Asia. So the stakes are high. We have a fundamental divergence of values with two incompatible visions for the future.

“Let there be no doubt: Great power competition is back, and we must maintain the technological edge as we go into the future.” 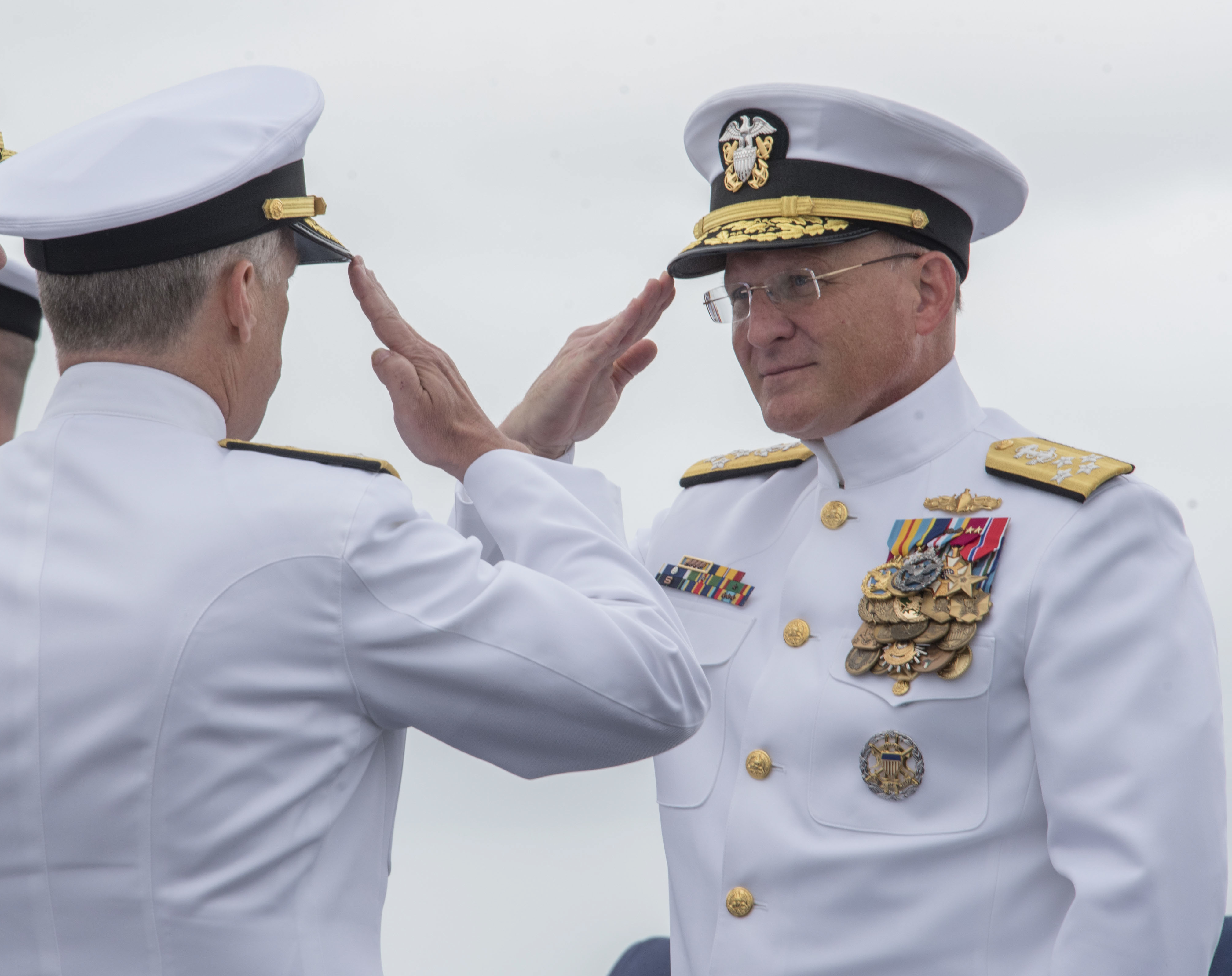 Alexander said the air wing of 1985 “looks nothing like what we have today,” with replacements of nearly all aircraft underway. The C-2 carrier onboard delivery airplane will be replaced by the MV-22 Osprey tiltrotor, he said, and the multi-mission, advanced F-35C Joint Strike Fighter will deploy aboard the aircraft carrier USS Nimitz (CVN-68) “later this coming year, bringing in a new age of lethality. It is that level of commitment that is necessary our dominance as a naval force across the globe.”

“Our first priority is to preserve peace by generating readiness of our equipment and our people to be able to employ forward as a deterrent first to anyone who should try to wish us harm,” he told the crowd. “And that is hard. But… in this environment, hard is authorized.”

“We will continue to build on the work” of Alexander’s tenure, he said, “and it’s up to the commanders to show results and to deliver those results.” Priorities include building partnerships, fostering trust and “being forward and being ready – day by day, night by night – on watch forward to preserve peace,” he added.

The military’s return to focus on high-end combat, with sustaining operations at sea against any adversary, mean “we must be ready to control the seas, the air, and deny any adversary the ability to threaten our homeland, our forces, our allies, our partners and our friends,” Conn said. He pledged to continue to “take a fully-certified Maritime Operations Center and make it expeditionary, capable of providing that one-two punch in conjunction with 7th Fleet.”

“We must continue to get better in all things we do. We will do so by continuing to operate outside our comfort zone… to challenge ourselves and challenge assumptions. We will send certified forces forward across the globe, and we will execute assigned missions professionally and boldly,” Conn said, adding,“we will work to uphold international rules and norms in the maritime domain, provide secure, safe and stable maritime environment and ensure continuing prosperity for all.”

Conn said he looks to continue to build and strengthen partnerships through multinational exercises like RIMPAC and the Oceania Maritime Security Initiative, adding, “we will strengthen each other by finding common ground while increasing our warfighting capability and capacity.”

“Our report card that will measure our success, he added, will be our ability to command and control integrated, distributed, disciplined and lethal combat fires at and from the sea that is synchronized with the joint force, at scale and with velocity. Our ability to maneuver to fire and fire to maneuver will be critical.”