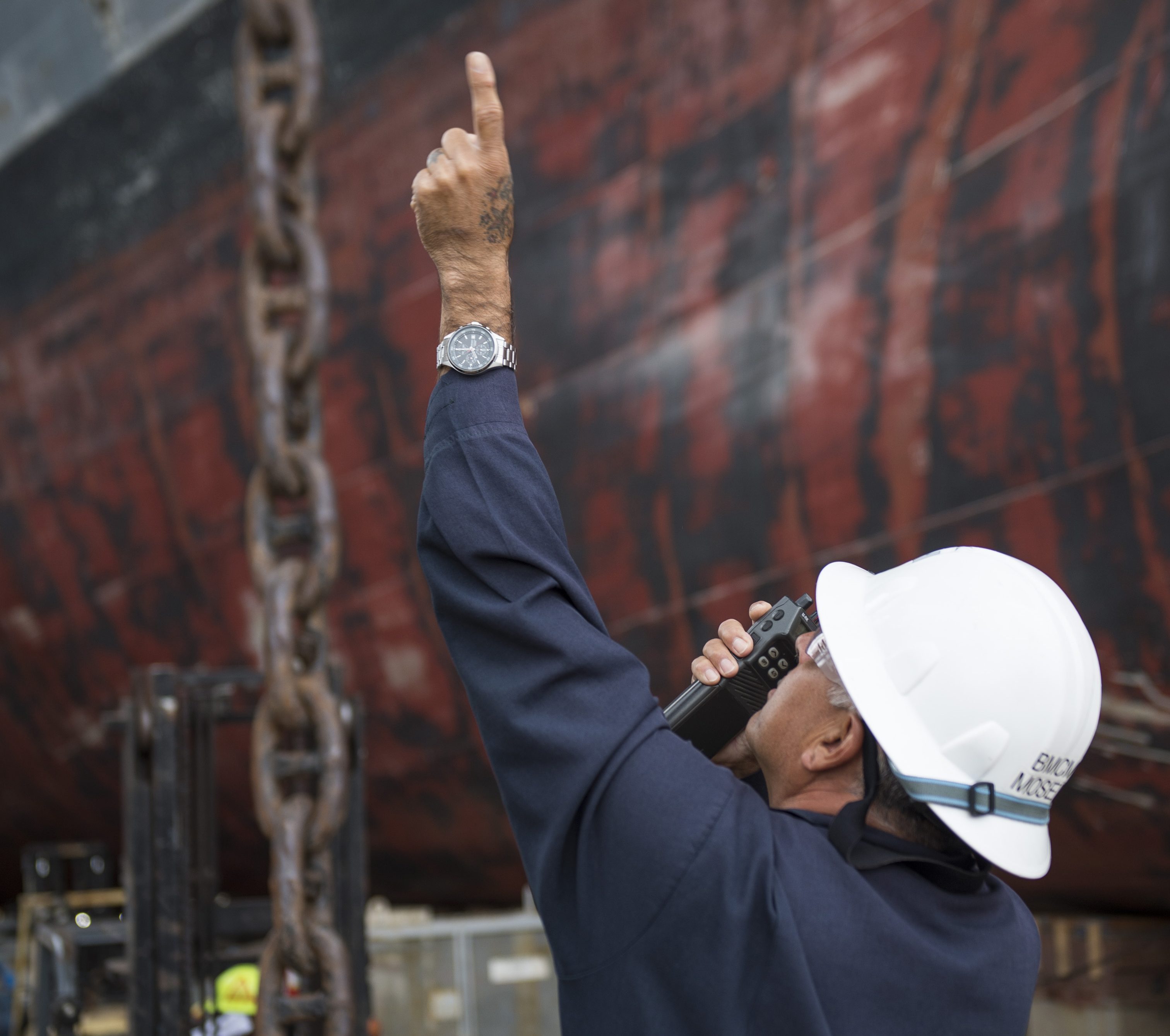 The Navy’s West Coast hub remains one of the most challenging fleet concentration areas for combatant and amphibious ship maintenance work: for the 45 ships homeported here, just four dry docks are available. Couple the limited space with delays due to poor planning, material not showing up on time, expanding work package scope and more, and the San Diego waterfront has the potential to create a lot of headaches for ships in repair and the fleet operators planning to deploy them.

Fleetwide, the Navy has about 46 ships in CNO availabilities right now, with more than 100 in the planning process. The Navy and its industry partners are only completing about 36 percent of maintenance availabilities on time, Rear Adm. Tom Anderson, the commander of the Navy Regional Maintenance Centers that coordinate this surface ship work, said last month at the American Society of Naval Engineers’ annual Fleet Maintenance and Modernization conference.

Anderson said there is “no shortage of work to do” to improve that on-time figure.

In San Diego specifically, there had been 21 concurrent availabilities recently, down to 16 now, Capt. David Hart, the commander of the Southwest Regional Maintenance Center in San Diego, told USNI News last month in an interview. The work is done by three prime contractors for complex work – BAE Systems, General Dynamics NASSCO and Huntington Ingalls Industries – as well as several small companies for non-complex work.

In this flurry of activity, the yards accomplished about 45 percent of work on time two years ago, but only 33 percent last year. This year is also tracking towards a 33-percent figure, Hart said.

Hart outlined a handful of barriers he and industry face to achieving on-time delivery of ships out of maintenance, as well as a handful of solutions he’s trying to put into play to make the situation on the San Diego waterfront more tenable to maintainers and operators. 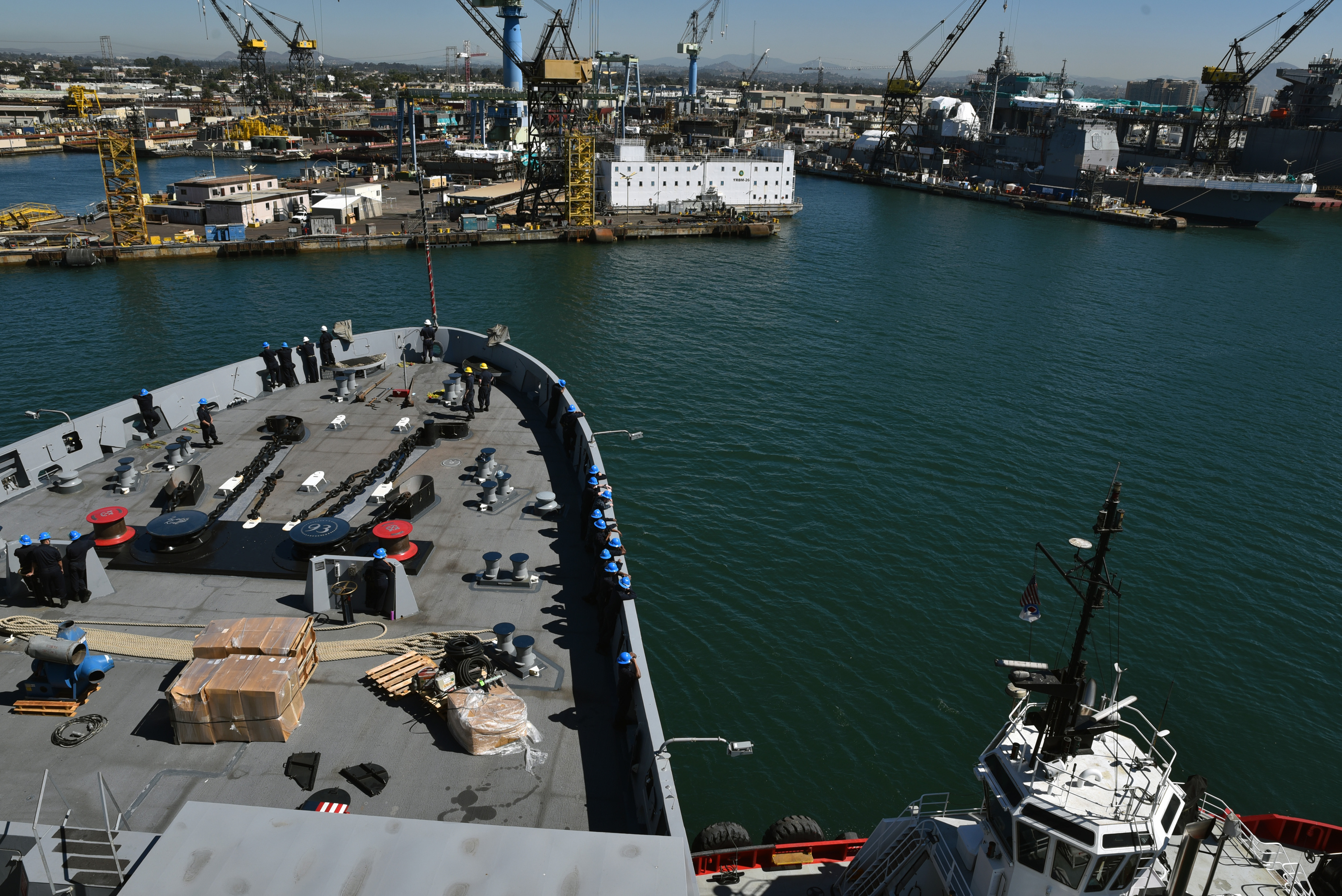 Hart, as well as his boss, Anderson, outlined ways the Navy is trying to do better planning on its part, and ensure the yards are doing the same, to increase that chance of being successful.

First, Hart said, is the need for a well-defined scope of work, that is finalized early, planned appropriately and has good work specifications.

To support that, Anderson said the Navy has acknowledged that it is awarding contracts too close to the start of work and now allowing enough time for planning; to address that, Naval Sea Systems Command and Naval Surface Forces signed out a revision to the process last month that moves milestones to the left – including awarding a contract 120 days ahead of the start of the availability – to help the industry team properly prepare.

Anderson noted that, with these changes, the Navy should see a higher percentage of material arriving ahead of the A-30 mark, or 30 days before the start of the work.

“We have lots of data, and we use that data as we’re evaluating progress toward starting an avail. And I have not come across an availability yet” that has fully met the goal of having material on hand at A-30, he said, noting that sometimes industry thinks it’s okay if the material arrives ahead of need, and sometimes the Navy simply awards contracts too late to support the A-30 material arrival.

As far as government-furnished materials go, Hart said he’s seen improvements from the Defense Logistics Agency and Naval Supply Systems Command in getting material in on time for availabilities in San Diego. That figure had been sitting between 50 and 60 percent of material on hand at A-30. Now, that figure is between 85 and 90 percent, and Hart is committed to getting to 100 percent. 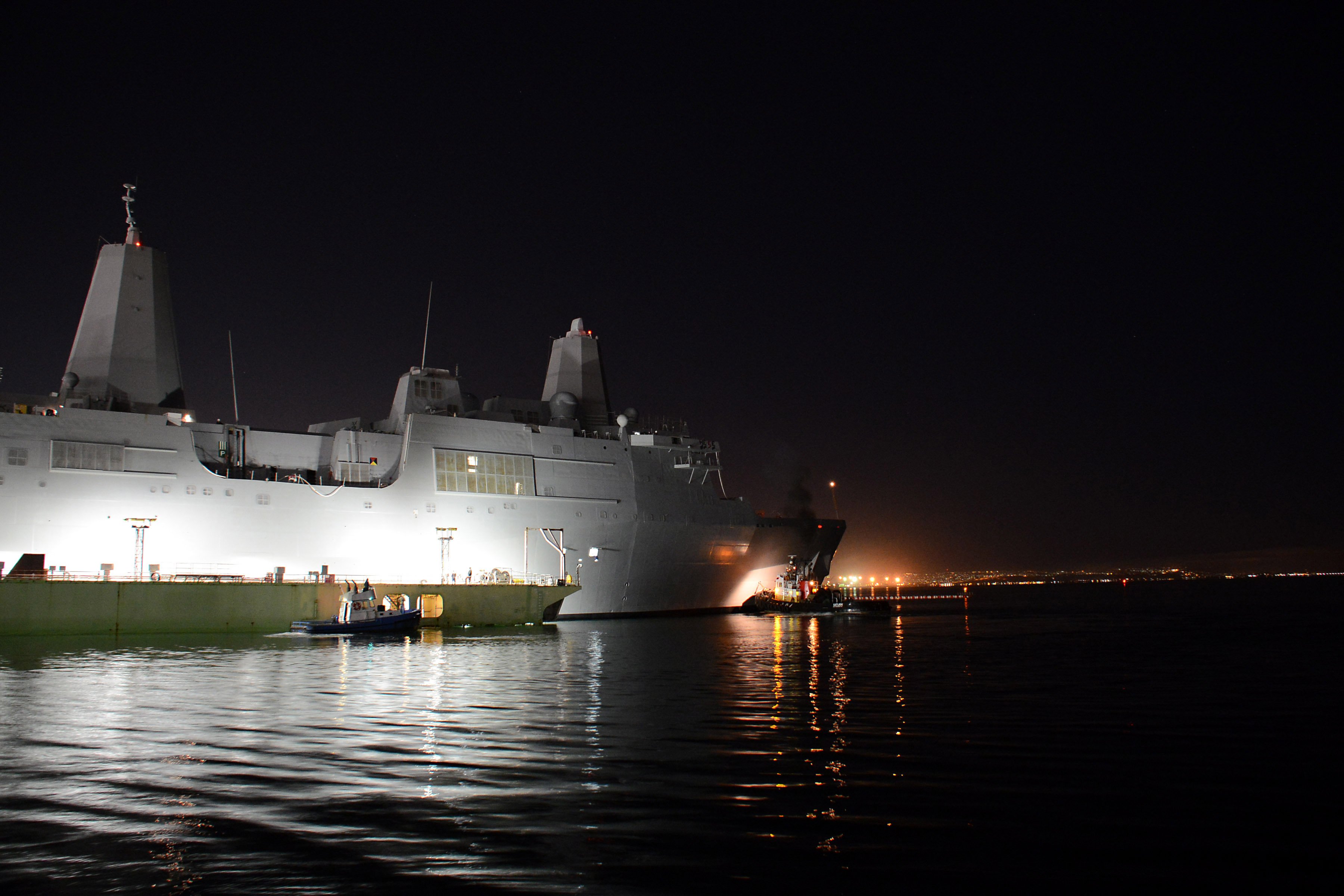 Another planning effort has to do with assumptions for how long the work should take: “you’re not going to make your schedules if you start out with availability durations that are unrealistic,” Anderson said.
“So at [U.S. Pacific Fleet’s] request, we went and took a look at how long we were scheduling availabilities for, took a look at the model we used to estimate those availability durations, and we found some areas that probably weren’t giving us very good estimates.”

An Availability Duration Scorecard 3.0 was created, which took into consideration port capacities and other current data to more accurately predict how long work would take and therefore to help the fleet commanders level-load the ports, rather than creating a backup of ships waiting to get work done.

Once the availabilities begin, Hart and Anderson said the Navy has a lot of requirements that bog repair workers down, further contributing to delays in the work and lengthier availabilities. A hard look at quality assurance checkpoints in particular highlighted to Navy leaders that redundancies and bureaucratic requirements were getting in the way of getting ships fixed up and returned back to the fleet for operations.

Hart said the number of NAVSEA requirements for industry has grown in the last decades. The maintenance community committed to achieving a 50-percent reduction in QA checkpoints while still ensuring that quality work was being performed.

After asking industry what requirements they’d like to see nixed, BAE Systems San Diego Ship Repair came back with a list of ideas that constituted a 67-percent reduction. Hart said that was “a little far a leap for folks from a risk perspective,” but BAE Systems and SWRMC working together compromised on a list of QA checkpoints that represented a 49-percent reduction from previous requirements.

“We think, based on just how long these checkpoints take, it potentially – again, potential, because we haven’t realized anything – it could save us about 20ish or so days. For the company to be doing blast and paint or something like that under the hull, to stop, to do a four-hour checkpoint callout … there’s a lot of impact to the schedule in wait time that that creates,” Hart said.

This agreement with BAE Systems is being tested with Arleigh Burke-class destroyer USS Shoup (DDG-86). Hart said he believes the outcome will be positive and will lead to more formalized changes in the QA requirements.

“What we noticed when we started going through it was, there was a lot of duplication of effort already in what we were doing, so that was pretty easy. We really pulled back on non-critical coded areas, we took a lot of risk in cutting back checkpoints … on non-critically coded areas,” he said.
“So I think there’s a lot more work we can still do there. I think we chiseled away at the low-hanging fruit.”

“It’s less about capacity. Frankly, I think there’s enough capacity if we just are smarter and more willing to look for that path to yes,” he said.

An example is this week’s announcement that the Navy will double-dock two destroyers – USS Stethem (DDG-63) and USS Decatur (DDG-73) – in the same dry dock at BAE beginning next month.

Thomas said tandem docking is a great idea the company pitched to the Navy and that “we’re transparent and willing to work with anything that they’re interested in trying.”

Hart told USNI News that there was some risk but not as much as one might think: both ships would have to be undocked at the same time, so a delay in one would delay both, but these two particular warships were chosen because the docking portion of their work scopes were almost identical. Stethem and Decatur may diverge in the work they need done once the under-hull portion is completed in the dry dock, but they should remain on similar timelines in the dry dock as long as something “extreme” doesn’t happen, Hart said.

Thomas said tandem docking helps increase the capacity of the San Diego waterfront – getting five ships into the four dry docks at any given time, if the Navy chooses to fully make use of capacity through double-docking the “Pride of California” dry dock at BAE, using the graving dock at the San Diego Naval Station, and filling the smaller “Pride of San Diego” dry dock at BAE as well as the dry dock at General Dynamics NASSCO.

“There’s all kinds of ways to leverage that capacity with innovative thinking and the willingness to find a path to yes,” he said.

Other innovative ideas aimed at shortening the duration of the availabilities – and therefore making better use of available capacity – are coming from BAE’s employees and subcontractors, he said, who are constantly looking for better and more efficient ways to pull shafting, do paint and blast work and more.

What Thomas said was most important, though – and what Hart agreed was also a top priority of his on the Navy side – was improving the relationship between Navy and industry. Hart said he came into the job with a lot of tension and finger-pointing happening, and he’s sought to “build a stronger partnership and how we work together to solve problems.”

Thomas, noting that USS Dewey (DDG-105) had recently come out of a docked availability on time and that Shoup was tracking towards an on-time undocking too, said “the innovation in our relationships and the discussions that have culminated in … two destroyers, two front-line ships getting ready to go back into the fleet, coming out on time and in great shape.” 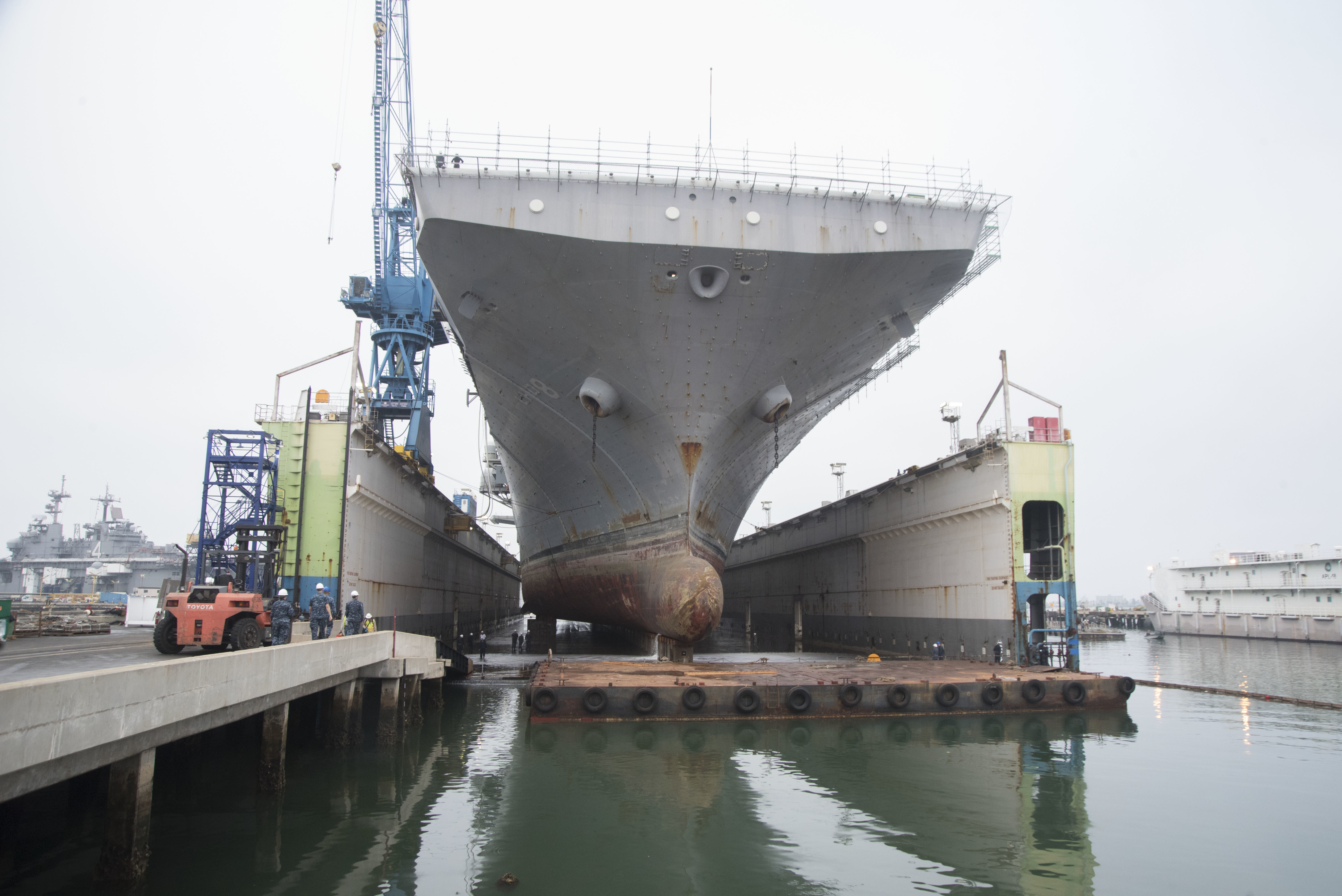 There is certainly room for improvement on the Navy and contractor side – and an imperative to improve, with operational pressures on the surface fleet increasing when more ships are stuck in port waiting for maintenance. Commander of Naval Surface Forces Vice Adm. Rich Brown has deemed that no ships will go out on deployment with material deficiencies, so the repair industry must figure out how to get the full scope of work conducted in a shorter timeline without sacrificing quality and safety, leaders have said.

Innovative ideas like tandem docking help, and new technologies and processes that shave days or weeks off of availabilities help.

But systematic challenges remain that the Navy/industry team will have to continue to tackle in the long-term.

“The scope of the work is getting much more complex, and I think that’s challenged some of our industry folks,” Hart said.

The contracting structure in San Diego has created three go-to companies for complex work – BAE, NASSCO and HII – and a myriad of smaller companies who do non-complex work. But many of those companies also subcontract for the Big Three, and there just aren’t enough workers to go around sometimes.

“There’s an excess of work in the port. We routinely – and as of this week – we’re seeing no bids on work, especially on some of the continuous and emergent maintenance availabilities. No one has the capacity,” he said.

He called small business contributions to ship repair one of the more positive successes he’s seen in his two years on the job leading SWRMC, saying “they have stepped up their game in supporting the Navy. But even they are over-extended at this point because they’re the subcontractors to the prime, and they’re the prime under the non-complex. So we have two different business models for them; they love the non-complex [multiple award construction contract], their destiny is in their own hands, they’re the prime contractor, and from my perspective, what I’ve observed over the past two years is … they’ve really stepped up their game and really provided a good service to the Navy, not only a good cost but also in most cases … have really delivered on time.”

Still, Hart said, the workload at San Diego is excessive and the companies will have to look at growing their workforce in particular trade skills to keep up. They are at times limited in taking on work because they don’t have enough welders – specifically aluminum welders – so the Navy needs to prove it can provide stable and predictable workloads over the long-term.

“We have to get to the point where we’re providing [industry] the incentive to go and hire the people and retain the people.”