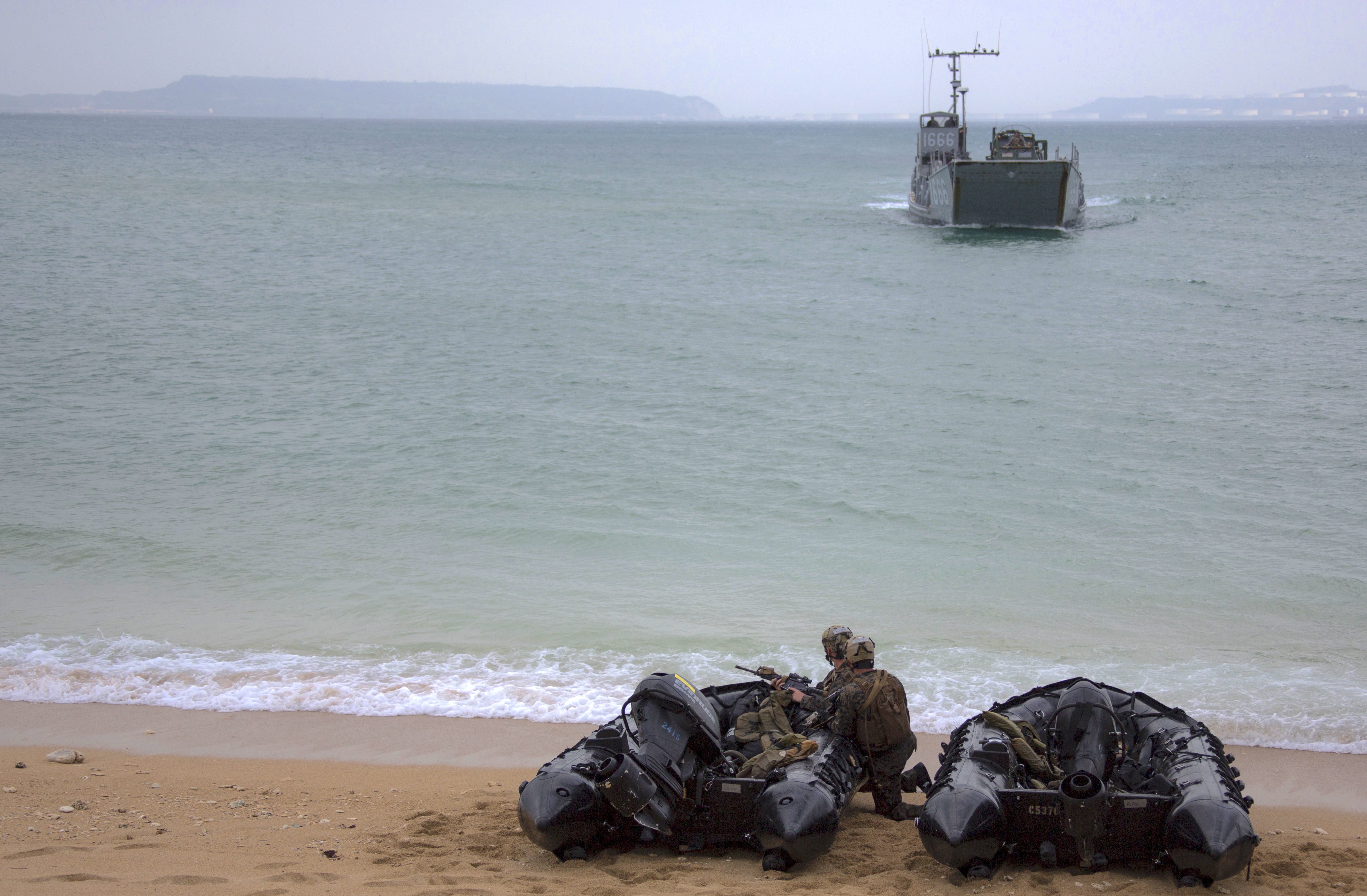 LONDON — Autonomous control systems developed for the Pentagon’s Sea Hunter unmanned ship could also help keep Marine Corps logisticians out of harm’s way during future amphibious landings, according to the company behind the technology.

Defense IT specialist Leidos is taking the kit it developed for the Sea Hunter medium unmanned surface vehicle, a 132-foot experimental wave-piercing trimaran, and applying it to the Marines’ Autonomous Littoral Connector program.

Leidos has already demonstrated the ability of a modified LCM-8 landing craft to run up a beach, stop for unloading/loading and return to sea without human intervention.

Now, with the elderly LCM-8s being phased out of service, the company is providing the same capabilities for the newer and larger Landing Craft Utility. The program is being overseen by the Marine Corps Warfighting Laboratory.

Addressing a naval seminar at the DSEI defense exhibition in London last week, Leidos Senior Vice President and Chief Technology Officer Tim Barton said, “the Warfighting Lab asked us to look at the autonomous logistics mission. When the Marine Corps attacks an objective on land from a sea base, what they’d like to do is have all the logistics come up on the beach fully autonomously.” 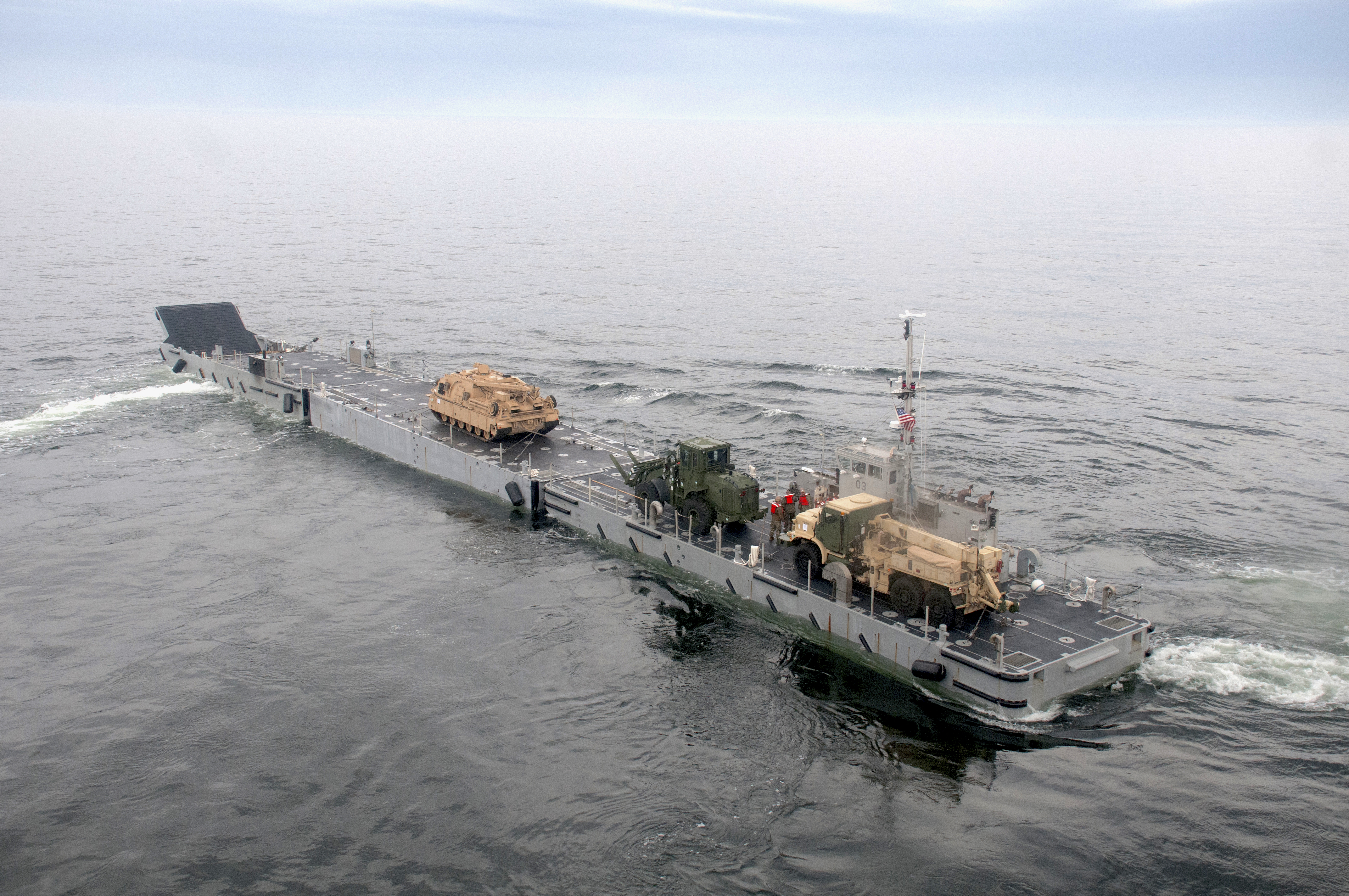 With seafloor mapping an essential precursor to any amphibious assault, Barton said that Leidos had also demonstrated an autonomous bathymetric survey capability using a 40-foot boat fitted with a multibeam sonar and moving vessel profiler.

If the quality of the bathymetric data was disrupted, he said, the boat would wait for the problem to be fixed before retracing its route and gathering fresh data. In addition, the platform had covertly launched and recovered an unmanned underwater vehicle from a submerged towed dock, also without human assistance.

The autonomous systems were developed by Leidos for Sea Hunter, which was conceived and built as a prototype for DARPA’s Anti-Submarine Warfare Continuous Trail Unmanned Vessel (ACTUV) program.

Fully complaint with obstacle-avoidance and collision regulations, the ship was transferred to the Office of Naval Research in January 2018 for general science and technology testing. Last year it became the first vessel to sail autonomously from San Diego, Calif., to Pearl Harbor, Hawaii, and back again.

With Sea Hunter due to transfer to the Navy’s new Surface Development Squadron One (SURFDEVRON 1) later this year, Leidos was awarded a $43.5-million contract in 2017 to provide a second ship for the ONR’s Medium Displacement Unmanned Surface Vessel (MDUSV) program.

Sea Hunter II is being built by subcontractor USMI in Long Beach, Miss., with delivery to ONR anticipated towards the end of 2020.

Leidos is also planning to integrate autonomous bridge decision aids onto a guided-missile destroyer, offering advice to crew members on the best and safest way to execute missions.

Barton emphasized that the intention is not to replace manned vessels. “It’s all about reducing risk and cost. It’s about increasing capability and capacity by augmenting the manned force structure.”

“The fleet are embracing [autonomy]. It’s coming, and it’s coming fast,” he added.

He suggested that missions “up close and personal with your adversary,” which until now have been judged too dangerous to contemplate, could now be conducted with minimum risk.

In July, the Navy issued a request for proposals for a Medium Unmanned Surface Vehicle (MUSV), and a contract award for a single vessel is expected towards the end of this year. However, options in that contract could take the figure to eight or nine vessels worth $350 million. A class of Large USVs is also being pursued by the Navy.

While the MUSV is intended for intelligence, surveillance and reconnaissance (ISR) roles, the larger variant “will be weaponized at some point,” Barton said. “It’s about being able to do that in a cost-effective way, getting distributed surveillance and distributed lethality to the fleet.”

“This technology is fairly mature. We’re moving away from things like platform safety and collision regulations, and towards payload integration and missions,” Barton continued.
“When you integrate a payload, you don’t just bolt it in, power it up. It has to be integrated into the autonomy infrastructure. Because sometimes that payload knows what the best position for the ship is, where to get the best signal-to-noise ratios on targets it’s trying to detect. Where should it put the ship to give that payload the best chance of operating properly. That’s what’s coming next.”