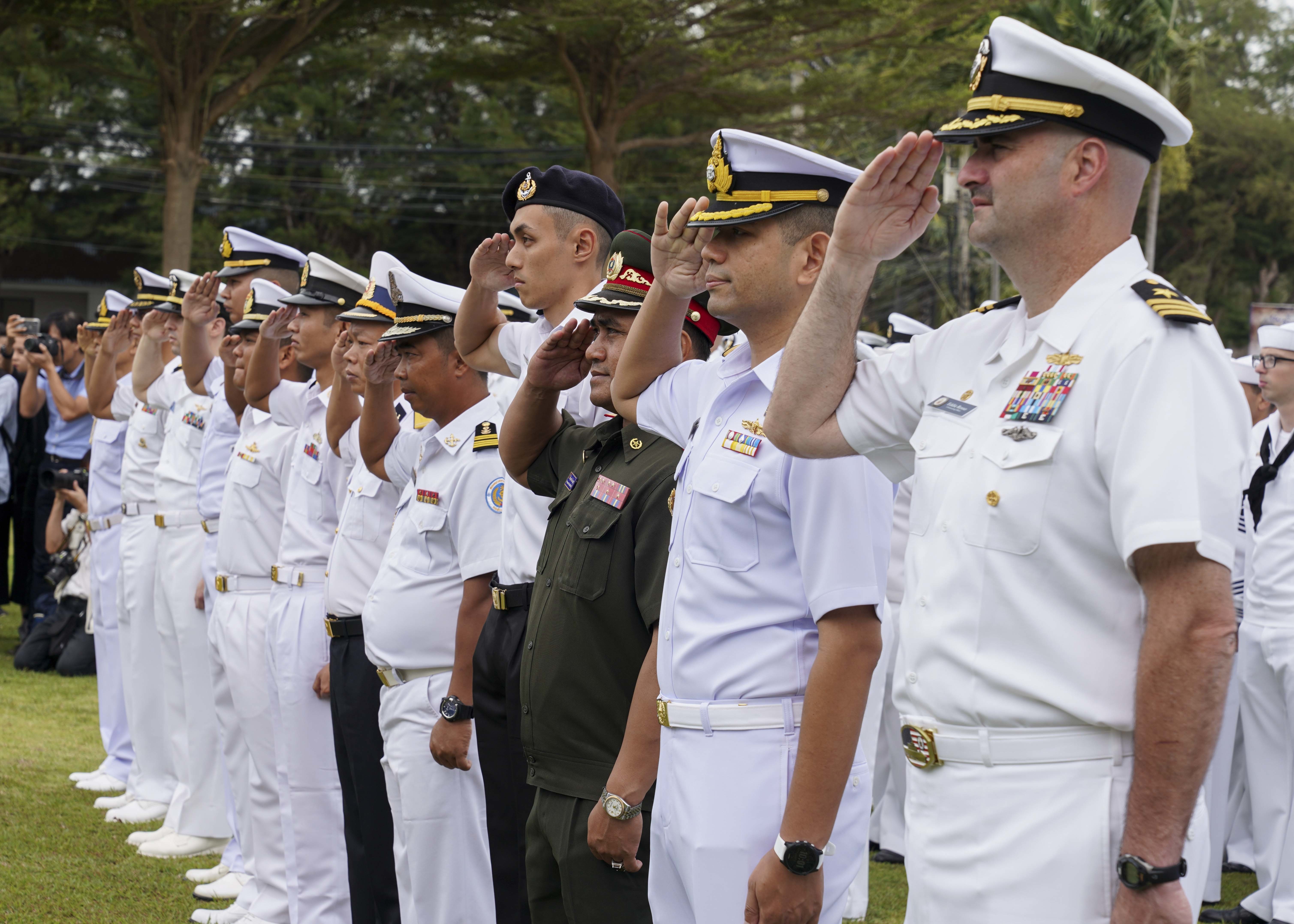 Sailors and maritime forces of ASEAN member states salute while standing in formation together during the opening ceremony for the ASEAN-U.S. Maritime Exercise (AUMX) at Sattahip Naval Base, Thailand. US Navy Photo

KUALA LUMPUR — The U.S. has kicked off a new exercise in the Western Pacific with participation of the maritime assets of the Association of Southeast Asian Nations (ASEAN). The ASEAN Maritime Exercise (AUMX) began on Sunday at the Sattahip Naval Base, Thailand.

This is a first for the U.S. to work with ASEAN as a whole, said Rear Adm. Joey Tynch, Commander, Logistics Group Western Pacific / Task Force 73, which oversees theater security cooperation for the U.S. Navy in Southeast Asia.

“When we kicked this off, we gave the planners a challenge – that this AUMX was not going to be a symbolic event, that we needed an exercise that would provide value for each of the countries,” he told reporters on Sept. 3. “One that would build capacity as well as relationships.”

While the Navy has been conducting exercises, port visits, and engagements in Southeast Asia for decades, Tynch added the AUMX represented a step forward in the trend of multilateral cooperation activities. For this exercise, the ships and aircraft taking part were organized in a combined task force structure. That’s exactly how navies structure themselves in real-world scenarios to work together and best leverage their forces, he said.

“The concept of AUMX this year is to enhance situational awareness and interoperability for all of ASEAN and for the U.S. as well. So, that’s the focus of this, really, on skills that are applicable throughout the world for maritime security”.

Responding to questions that asked if the exercise was related to China’s activities in the South China Sea, Tynch said, “the exercise is not focused or dedicated against or towards anyone else. It’s to enhance the skills of ASEAN and the U.S. working together.”

In October, China and ASEAN held a similar exercise, reported The Diplomat.

Taking place from Sept. 2 to Sept. 6, the AUMX exercise consists of pre-sail activities in Thailand, Singapore and Brunei, followed by a sea phase in international waters in Southeast Asia, including the Gulf of Thailand and the South China Sea before concluding in Singapore.

The task force headquarters will be located aboard the Royal Thai Navy (RTN) offshore patrol vessel (OPV) HTMS Krabi (OPV 551), and include representatives from each ASEAN member state. U.S. Commercial vessels were contracted by the U.S. to serve as the simulated target vessels for the VBSS portion of the exercise, which will focus on countering maritime threats. An ashore support element in Singapore, where the Republic of Singapore Navy (RSN)’s Information Fusion Centre (IFC) at Changi Naval Base, will use its Real-time Information-sharing System (IRIS), a web-based information-sharing system designed to enable rapid collaboration for maritime security, to support the exercise. The RSN’s IRIS was launched in May 2019.

Answering a USNI News question on the future of AUMX, Tynch stated it was too early to say.

“We have eight ships participating, four aircraft, over a thousand sailors, that are taking place right now, as well as three contracted vessels that we’re using to provide realistic training for our visit, board, search and seizure scenarios,” Tynch said. “Once the exercise is complete, we’ll take a look at what we have and make decisions moving forward.”