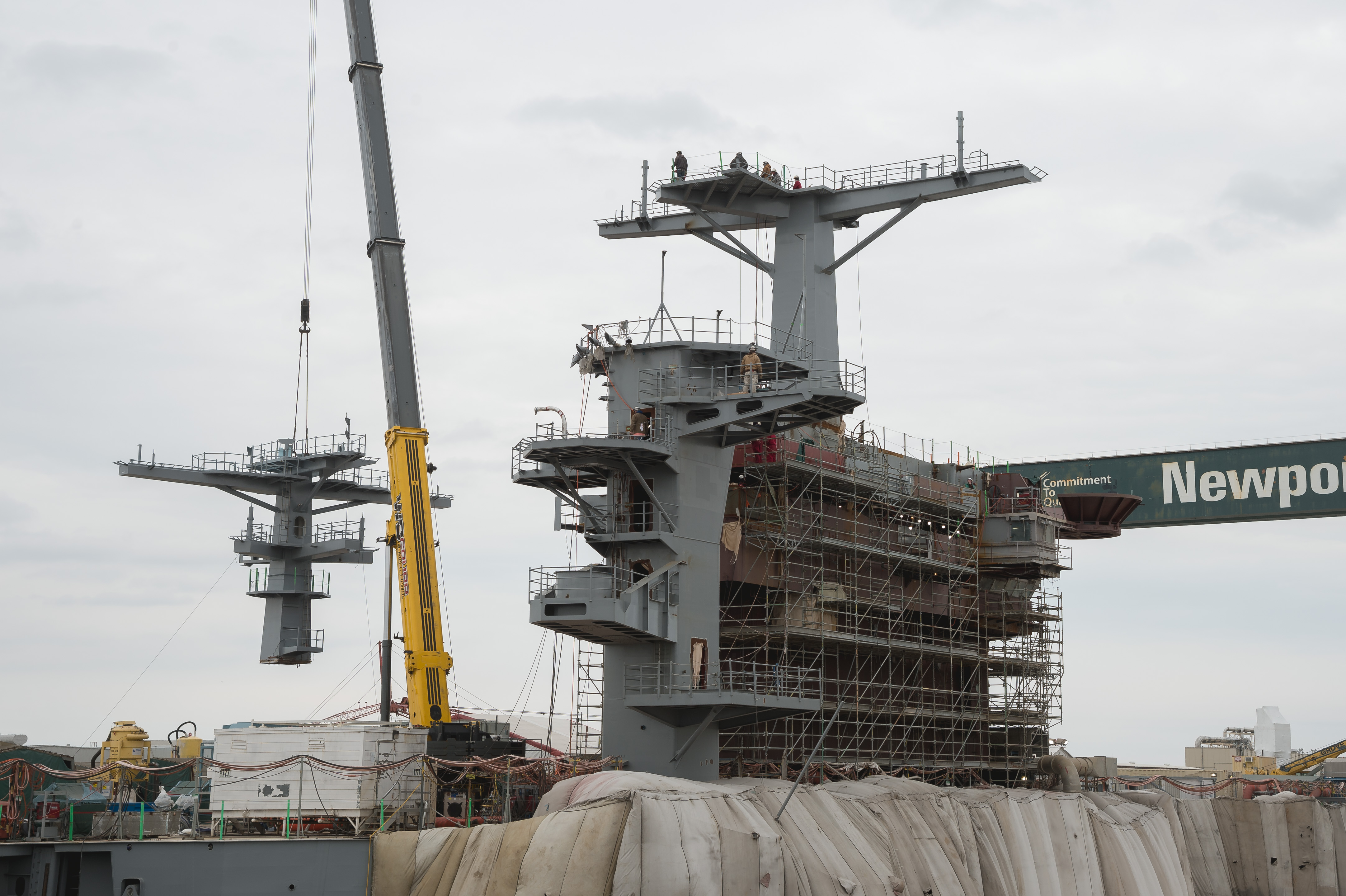 Aircraft carrier USS George Washington (CVN-73) is more than halfway through its refueling and complex overhaul and is set to leave the dry dock at Newport News Shipbuilding next month to begin the next phase of a four-year overhaul.

The ship’s crew announced this week it had reached the 50-percent completion mark in its portion of the carrier’s RCOH, with each department onboard working to restore their equipment and spaces to keep the ship ready to operate for another 25 years.

Each nuclear-powered aircraft carrier goes through a four-year refueling and complex overhaul (RCOH) at the midway point of its 50-year service life. Newport News Shipbuilding handles the most complex work, including refueling the nuclear reactor plant, tearing out the flight deck and catapults to repair corrosion and damage, and upgrading networks and systems.

“USS George Washington (CVN-73) currently is in our dry dock for hull and freeboard blast and paint; repairs to its propellers, sea chests, shafts, and rudders; and defueling and refueling of its power plant. The overhaul is more than 50 percent complete, and we are on track to flood the dry dock next month and transition to the next phase of the RCOH – final outfitting and testing. The RCOH is expected to be completed in late 2021,” Newport News Shipbuilding spokesman Duane Bourne told USNI News.

“We are pleased with the progress we are making on the USS George Washington (CVN-73), and continue to work closely with our Navy partners and more than 680 suppliers from 40 states on this extremely complex engineering and construction project,” he added.
“We look forward to starting our final outfitting and testing program to redeliver a fully recapitalized carrier capable of supporting current and future warfare doctrine for another 25 years.” 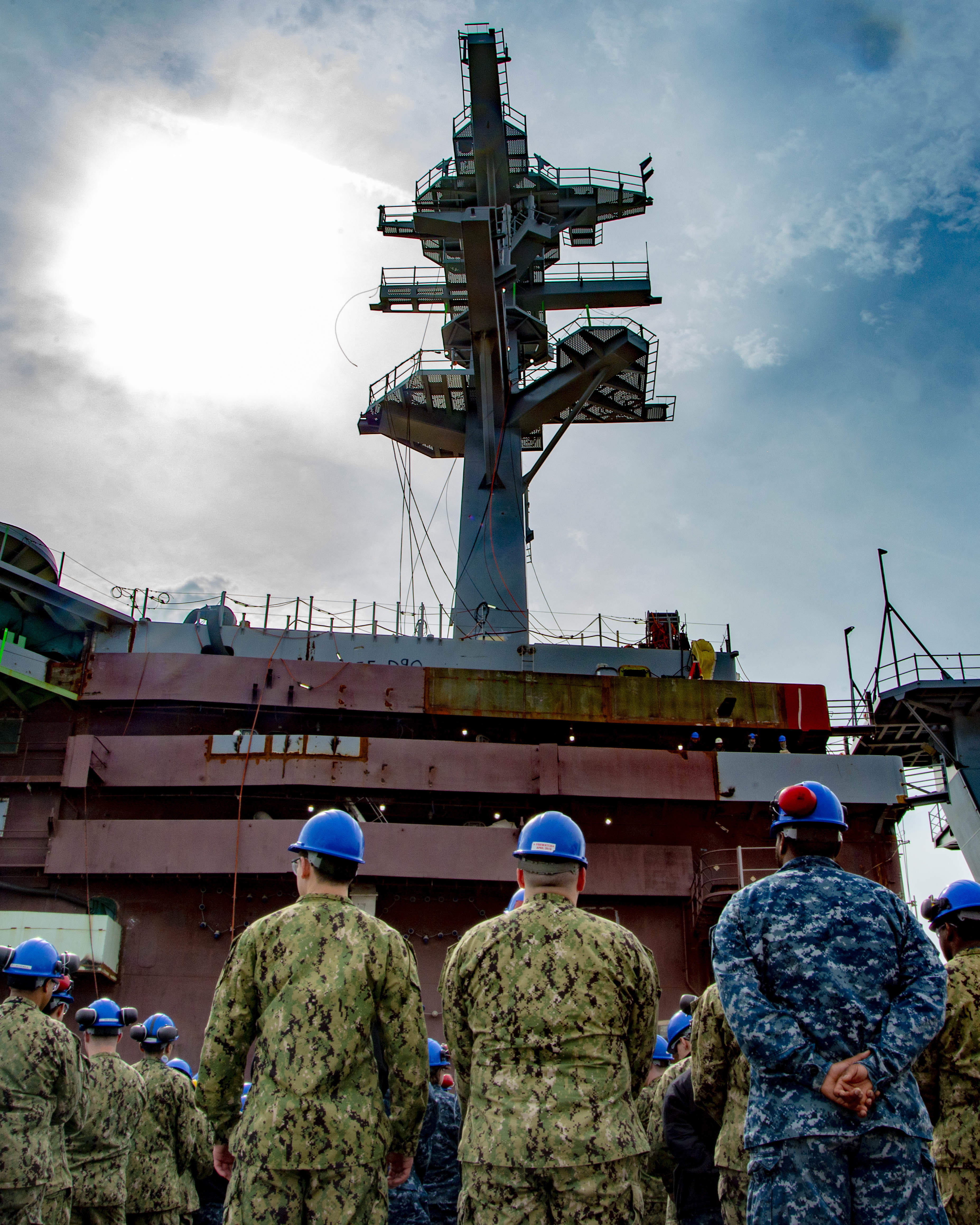 Sailors assigned to the Nimitz-class aircraft carrier USS George Washington (CVN 73) look up at the newly installed main mast during the mast-stepping ceremony on George Washington’s flight deck. Mast-stepping is an ancient Greek and Roman practice of putting coins at the base of the mast of a ship still under construction. US Navy photo.

The ship’s crew stays busy during RCOH working through their own ship’s force work package (SFWP), which the crew announced this week is halfway complete.

“During George Washington’s time in the shipyard, she will overhaul and upgrade the combat systems and other warfighting capabilities, improve the ship’s material condition, and refuel the reactors. The work put in for the SFWP during RCOH, with additional work completed by Newport News Shipyard, ensures that George Washington will leave the shipyard as the world’s most technologically-advanced capital warship, a validation of the type of work that can only be accomplished at one shipyard in the entire nation,” according to a Navy news release.

In addition to getting the work done faster, having the crew participate in the midlife overhaul gives sailors a chance to learn the ins and outs of their gear, which should help them better understand how to maintain and troubleshoot the equipment later on.

“Transitioning from normal operations to RCOH has given us the opportunity to completely disassemble our equipment and learn the proper way to rebuild it, in order to restore it to an operational state,” Machinist’s Mate 1st Class Larissa Pruitt, the auxiliary division’s leading petty officer, said in the news release.
“I wouldn’t do anything differently, as this shipyard period has made us better machinist’s mates and a stronger family.”

George Washington began its RCOH in August 2017 and is expected to wrap up in late 2021.

Ahead of flooding the dry dock and moving into the next stage of work, George Washington’s deck department in particular has been working closely with Newport News officials to ensure the ship is ready for that milestone, according to the Navy news release.

“The biggest challenge for us [so far] was coordinating with the shipyard and working together to get the anchors put on in a timely manner,” Chief Boatswain’s Mate Myren Fripp, a leading chief petty officer in deck department, said in the release.
“Making sure all of the equipment needed for this evolution was up and running and making sure we had all of the right people in the right places at the right times definitely helped the process run smoothly.” 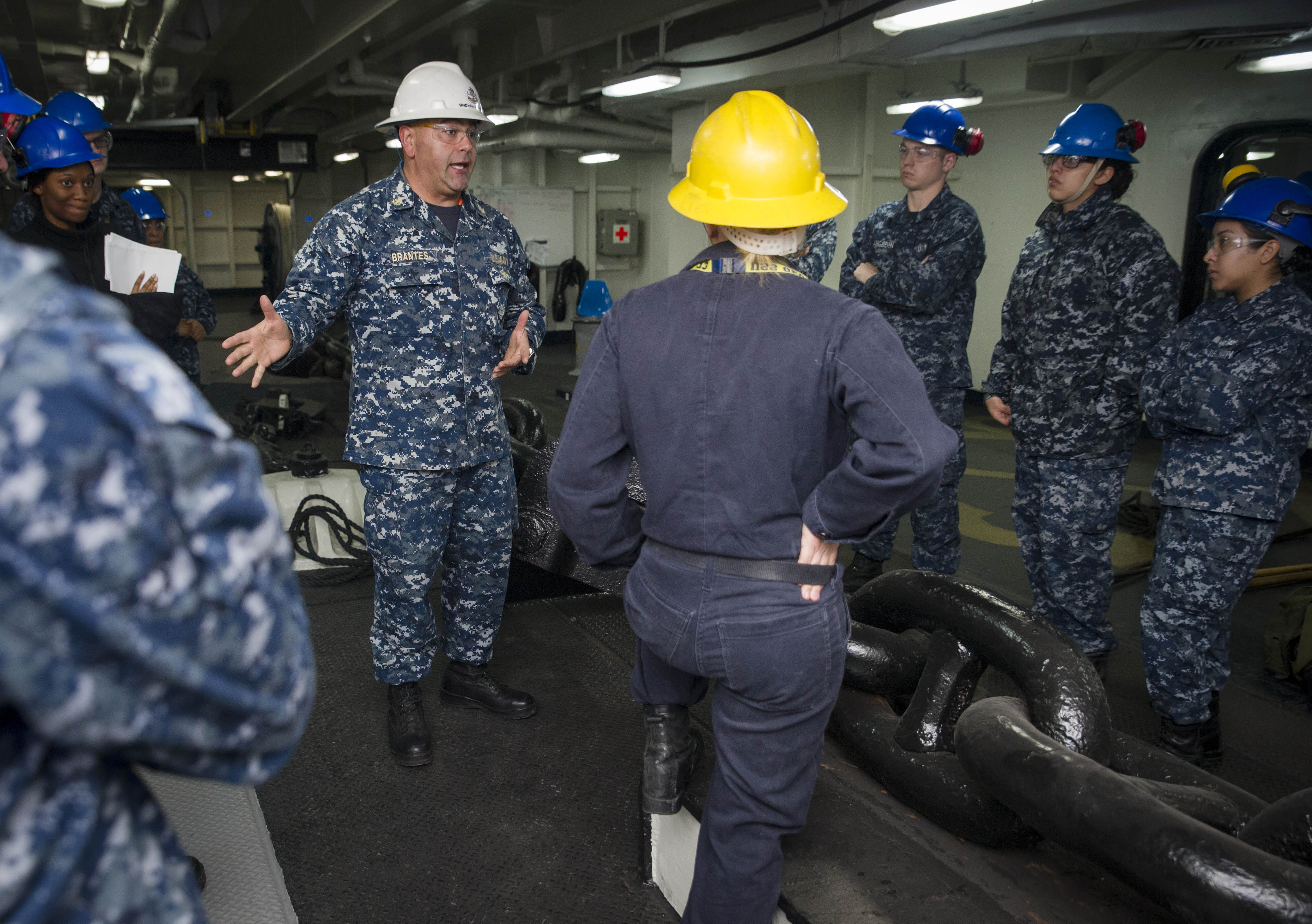 Chief Boatswain’s Mate Edmundo Brantes gives training to deck department Sailors before removing the anchor from the ship in the forecastle aboard the Nimitz-Class aircraft carrier USS George Washington (CVN 73) on Oct. 30, 2017. US Navy photo.

Even as final outfitting and testing on GW will span the next two-plus years, early work on the next RCOH is already underway.

Newport News Shipbuilding has been conducting advance planning for the RCOH on USS John C. Stennis (CVN-74) since last summer.

“As part of our planning, we have completed onboard ship checks using the latest laser scanning technology in preparation for the ship’s arrival at Newport News Shipbuilding in January 2021,” Bourne told USNI News.

Chris Miner, vice president of In-Service Aircraft Carrier Programs at the shipyard, told USNI News last summer that technologies such as laser scanning and digital modeling were being used on George Washington and would be applied to Stennis and future carriers as well to cut down on the cost and time of planning the work package.

“So a ship check: we used to send hundreds of people to go manually track systems, do drawings and everything. 73 – and it was a forward-deployed carrier, it was in Yokosuka – so think about the cost of sending hundreds of people to Yokosuka, Japan, to manually ship check all these systems,” Miner said in August 2018.
“So on 73 we used the laser scanning technology, sent a significantly smaller team, were able to use the scanners to scan systems and bring those back and use them to build our work packages. And between just the cost of scanning, the people we didn’t need, and the travel costs, we saved on the order of $2 million, a couple million dollars, just in the ship checking cost.”

He said those scans and the lessons learned would pave the way for planning for Stennis, which began around that time last year.