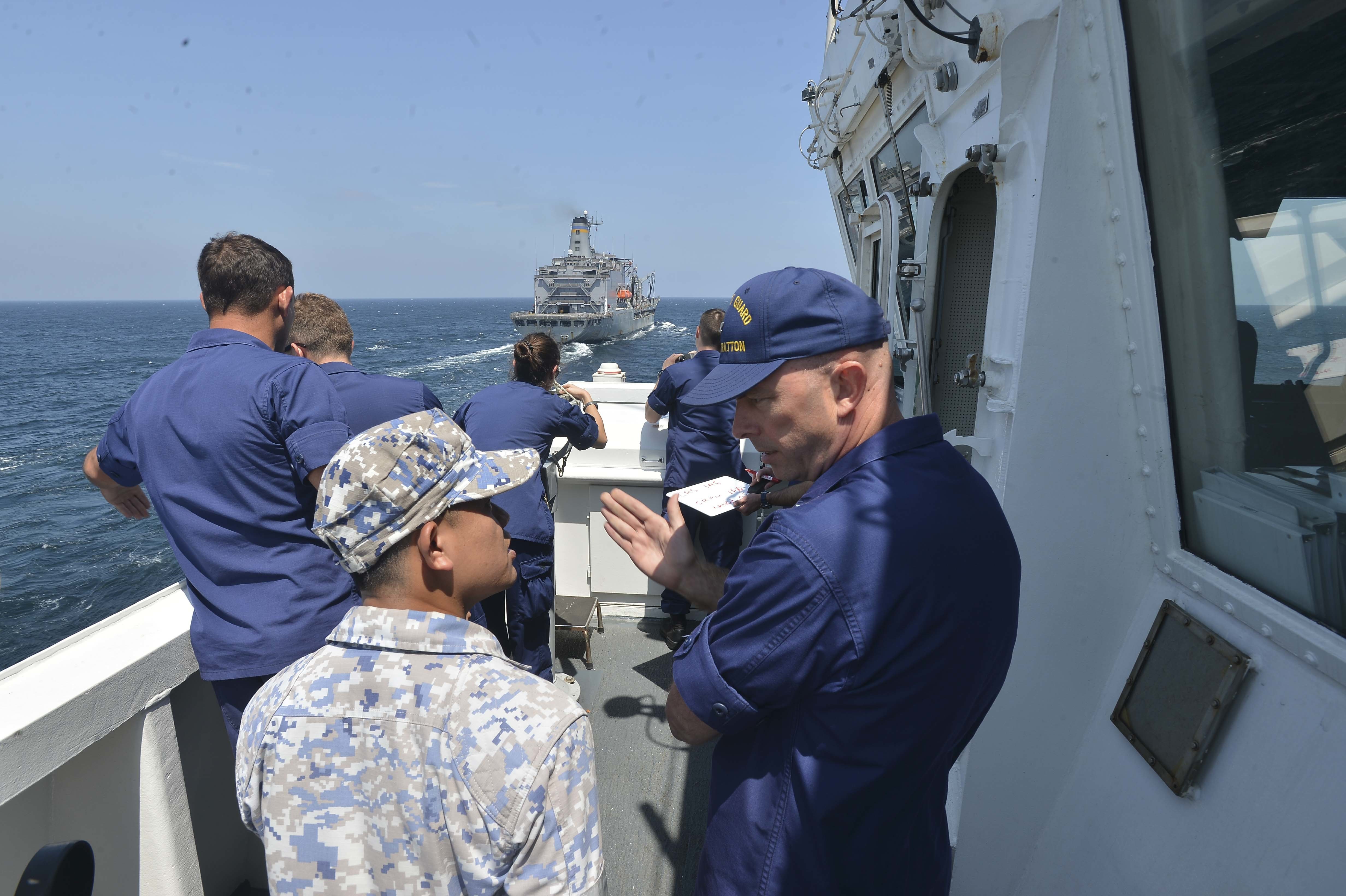 Capt. Bob Little, commander of the U.S. Coast Guard Legend-class cutter USCGC Stratton (WMSL 752), explains the process of a replenishment-at-sea (RAS) to a Royal Malaysian sailor as part of the at-sea phase of Maritime Training Activity (MTA) Malaysia 2019 on Aug. 17, 2019. MTA Malaysia 2019 is a continuation of 25 years of maritime engagements between the U.S. Navy and Royal Malaysian Navy serving to enhance mutual capabilities in ensuring maritime security and stability. US Navy photo.

The 50,000-member Coast Guard “is a force multiplier for our nation,” Throop told the Surface Navy Association West Symposium Thursday at Naval Base San Diego.

The Coast Guard falls under the Department of Homeland Security and has a wide range of law enforcement missions under federal law that the Department of Defense’s armed services don’t have. “To ensure maximum application of those authorities, the Coast Guard and Navy partner up to ensure that law enforcement actions can be taken, no matter what the situation,” Throop said.

“We bring to the fight unique authorities, dozens of bilateral and multilateral agreements with partner nations, unique capabilities from law enforcement all the way up until and to include lethal force,” he said. “It includes short-notice maritime response, taking control of a ship in a contested environment with an opposing force.”

This month, for example, the USS Tornado (PC-14), a 107-foot Cyclone-class patrol ship, is patrolling the waters of the Eastern Pacific, a major sea corridor for illicit, covert drug-smuggling operations. On board with Navy personnel is a Coast Guard detachment, a 10-member tactical law enforcement team stationed in San Diego, Throop said. “It’s that team effort that we’re able to get after some of these problems.”

Across the Pacific, the Coast Guard’s focus and the commandant’s “ready-relevant-responsive” guiding principles “have never been more important than they are today,” Throop told the audience. “In the far reaches of the world, presence equals influence – and that applies to the Western Pacific, the Arctic and the Antarctic.”

The extended deployment of National Security Cutter USCGC Bertholf (WMSL-750 ) provided the U.S. 7th Fleet and foreign partners in the region a credible force to enforce U.N. Security Council resolutions against the North Korean regime and enforce international maritime policies in the East China Sea. The USCGC cutter Stratton (WMSL-752) is two months into a six-month deployment to the Western Pacific with similar DoD-supporting missions, Throop said. China’s continuing expansion of its sphere of influence, and its military and economic footprint, across the South China Sea and Indo-Pacific is a major U.S. strategic concern in a region already home to potential hot spots.

The Coast Guard “shares a strong commitment with our Navy in pursuit of a free and open Indo-Pacific, governed by a rules-based international system that promotes peace, security, prosperity and sovereignty among all nations,” Throop said. 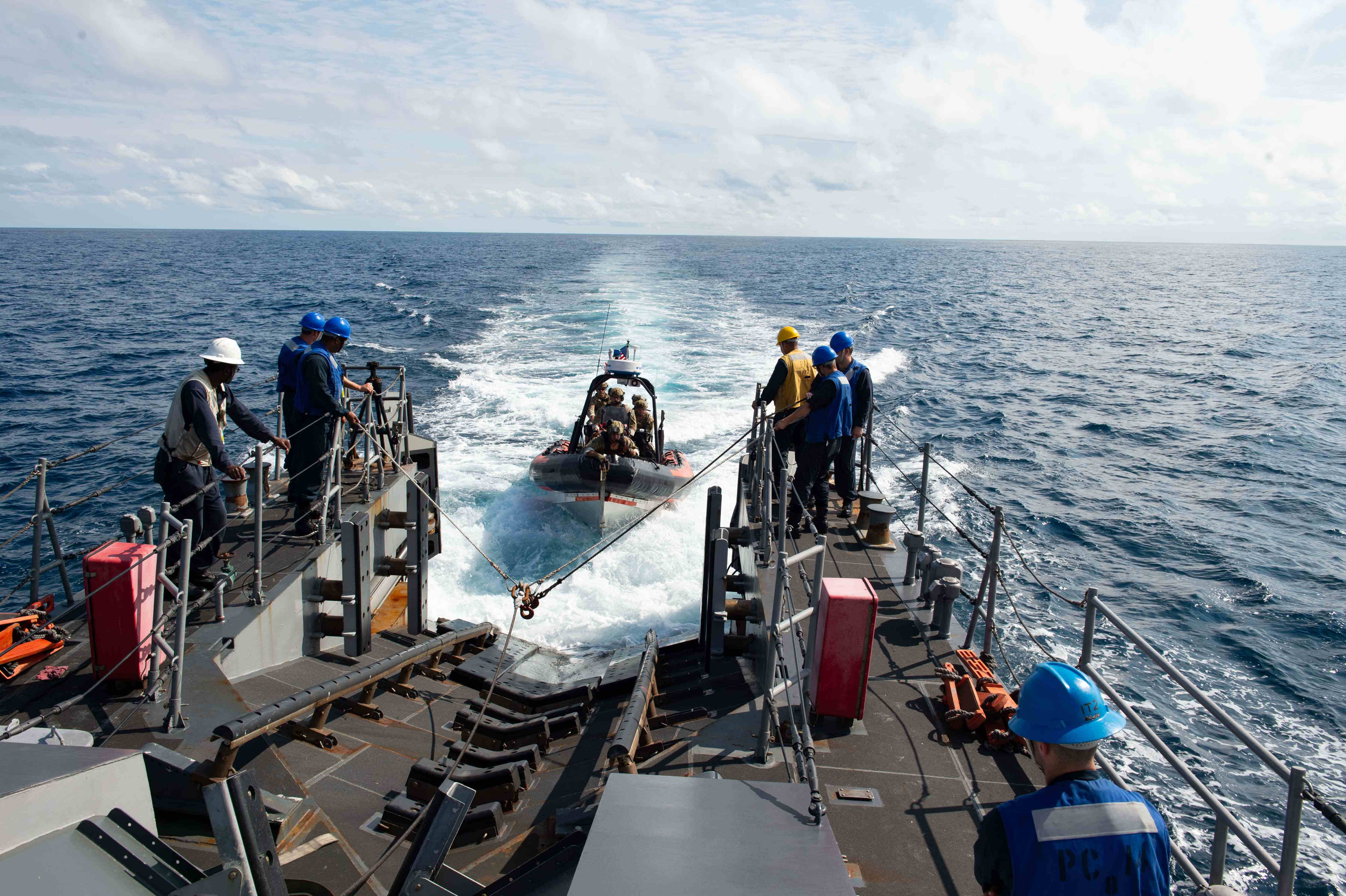 Coast Guardsmen aboard a rigid-hull inflatable boat (RHIB) return to board the Cyclone-class coastal patrol ship USS Tornado (PC 14) after a rite of approach (ROA) operation while underway in the Pacific Ocean on Aug. 18, 2019. Tornado is currently underway in support of Campaign Martillo, a joint operation with the U.S. Coast Guard and partner nations, in the U.S. 4th Fleet area of operations. US Navy photo.

In places like the South Pacific and Oceania, the Coast Guard’s “soft-power approach … allows for greater access where Big Navy would otherwise have challenges,” he said. Small island-nations, with local coastal patrol forces, dot the region, and “their naval forces look a lot more like your Coast Guard.”

The Coast Guard’s presence in the region, and in particular events like the Southeast Asia Cooperation and Training exercise held in Singapore, helps strengthen ties as Coast Guardsmen and women work with those forces in areas of law enforcement, maritime domain awareness and other missions. Earlier this summer, Independence-class Littoral Combat Ship USS Montgomery (LCS-8) and a Coast Guard law enforcement detachment team joined in a WESTPAC fisheries mission in Oceania, a region where small island-nations depend on security of local fisheries in their exclusive economic zones for sustainment.

“What we in America often don’t realize is the vast majority of the world relies on fish stocks as their primary protein source,” Throop said, noting the U.S. maintains 20 percent of the world’s fish stocks in its EEZs. “If the fish stocks crash, that’s food security for those nations. It’s also economic security, since most of their GDP is based on fisheries. When you have food insecurity and economic insecurity, it results in national security problems.

“That’s what we’re trying to get after, before they become to be a problem,” he continued. Illegal fishing “is a multi-billion dollar a year problem set, with very real consequences. Our services, together, must carry the banner for those nations.”

In the Middle East too, where Coast Guard forces have operated in U.S. Central Command since 2002, units continue to work alongside the Navy’s 5th Fleet in maritime missions in the Persian Gulf and along the Arabian Peninsula, where suspicious actions by Iran continues to vex U.S. and military officials. “The Navy and Coast Guard must remain vigilant and ready,” Throop said.

The Coast Guard is planning to replace its six Island-class patrol boats stationed in the region with some of its newest cutters. “We will soon be bringing over our Fast Response Cutters,” he said.

The FRC’s “are much more capable than a patrol boat,” he said, in response to a USNI News question. “We are still figuring out how to leverage those. We are having that internal conversation as a service: What should that concept of operations actually be? Are those assets that should be employed at the sector level, the district level or the area level?”

FRC’s “are extremely capable assets,” he added, noting their “longer staying power” at sea compared to the patrol boats. Currently, they operate in the Pacific with a 225-foot buoy tender for refueling. “They are basically a small surface action group in Oceania right now, taking care of some of that mission and building capacity with our partner nations,” he added. 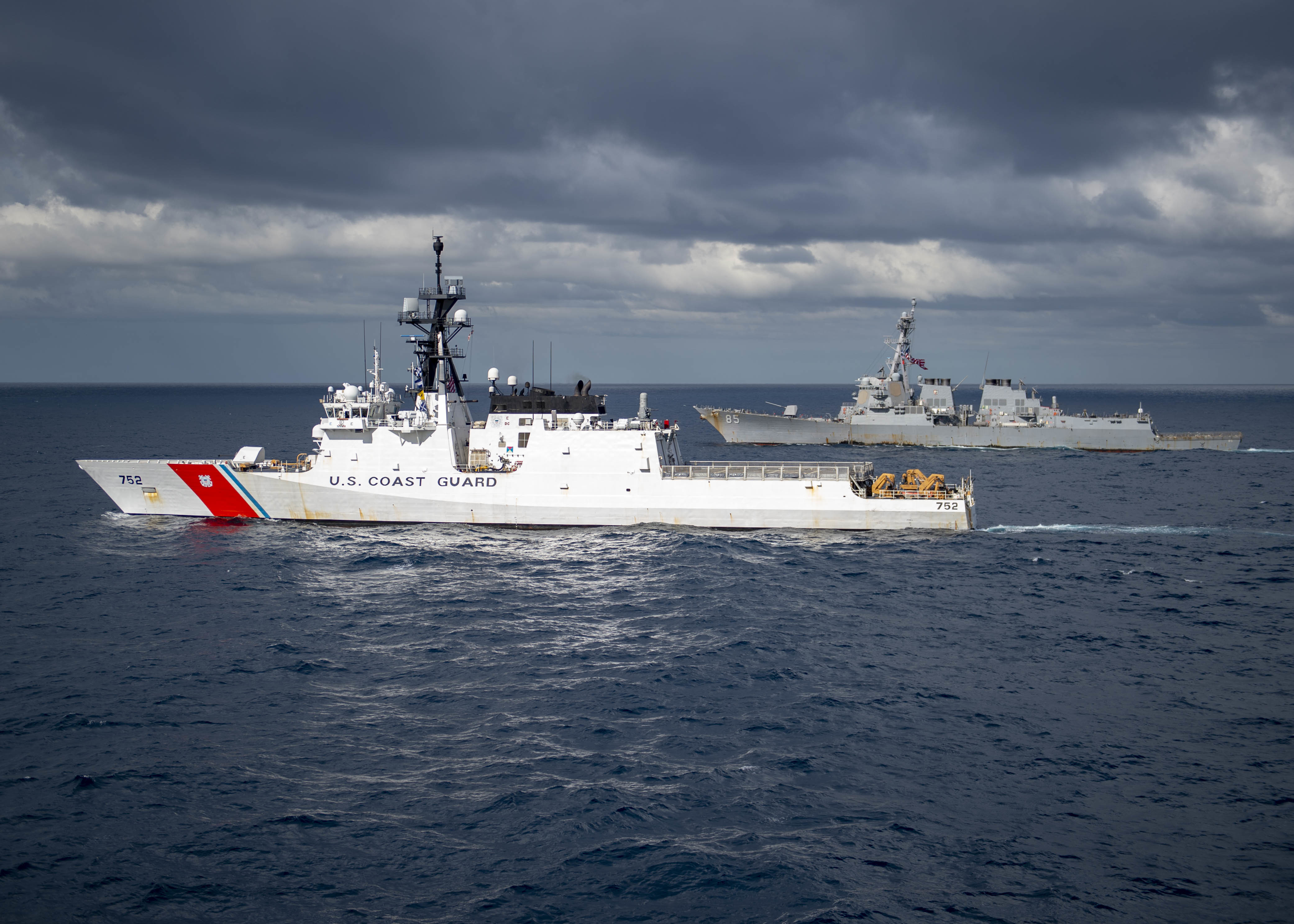 The Coast Guard’s aging icebreaker, USCGC Polar Star (WAGB-10) is undergoing a dry dock maintenance availability, and its replacement is slated to arrive sometime in the 2023 to 2025 time frame, Throop said – but the Arctic is a growing national security hot spot, driven by warming oceans and reduced sea ice coverage.

“If you pay attention to the news, everyone has a stake in the Arctic,” he said. “With the changing climate, there’s a new ocean up there.”

Last year’s crossing of a Maersk container ship through the Northwest Passage, saving 17 days of commercial transit, is sure to pave the way for a new, significant shipping route, and increased access for other maritime operations and forces across the polar region. The Russians have outposts along its northern coast, which “they say they’re for air defense – but they are militarizing the Arctic,” he said. “Canada, the Netherlands and Russia all have competing claims on territory because of the gas, oil and mineral reserves up in the Arctic.

“If the U.S. isn’t there, we are not going to have a say in the fight,” Throop noted.

At least three heavy icebreakers – or potentially as many as six – will be needed to get access to the Arctic as well as Antarctica, where the Coast Guard supports Operation Deep Freeze, “something where we have got to be there,” Throop said. Still, a half-dozen icebreaker fleet still would pale in comparison to Russian’s fleet of 40-plus icebreakers, he said. China’s declaration as “a near-Artic nation” will pose a challenge, too, Throop added.