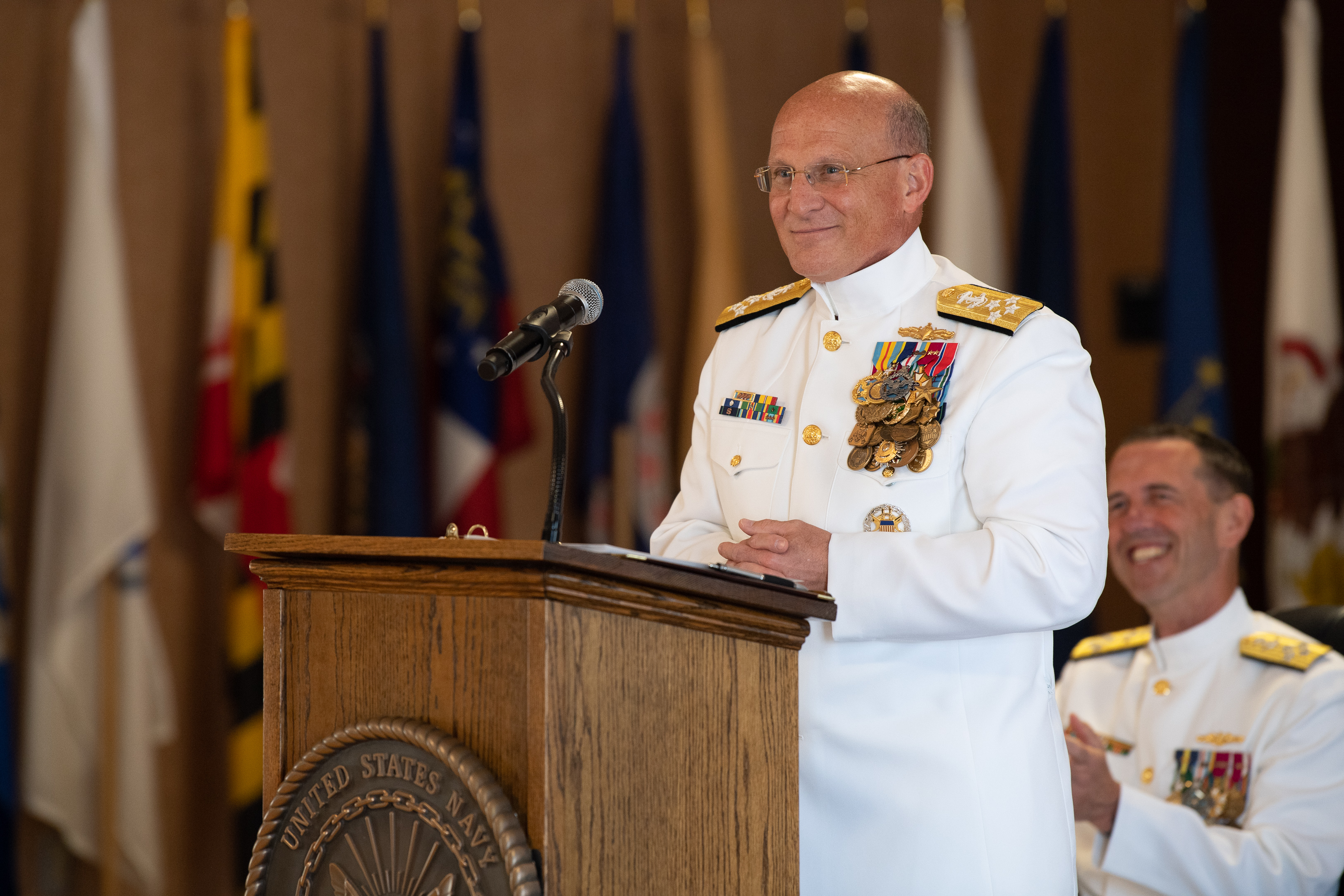 Chief of Naval Operations Adm. Mike Gilday delivers his first remarks as the 32nd CNO during a change of office ceremony held at the Washington Navy Yard. US Navy Photo

WASHINGTON NAVY YARD – The next head of the U.S. Navy promised to continue the service’s drive to reposition itself as a high-end fighting force with a “sense of urgency,” he said during a brief speech at his change of command ceremony on Thursday.

“My focus in the coming years is to move forward with a sense of urgency and sustaining our readiness and modernizing our force and taking care of our most important weapons system or sailors and their families,” said newly-minted Adm. Michael Gilday. “We will question our assumptions. We will think differently about the competition that we are now in. We will be the navy the nation needs now and we will build a Navy the nation needs to fight and win in the future.”

He relieved outgoing-CNO Adm. John Richardson in a modest ceremony at the Navy Yard.

Gilday takes over the service as the Navy’s 32nd chief of naval operations in the midst of a large-scale readiness drive and rethinking of how the Navy will grow and change to meet the goals of the 2018 National Defense Strategy.

“I do believe that our Navy strategic direction is rock solid and I think our Navy is in great shape. We are recruiting and retaining a high-quality force,” Gilday said.
“We are providing well-trained combat forces forward around the globe. We are modernizing our Navy and scope and a face that we have not seen in decades.”

Gilday, who previously served as the director of the Joint Staff, is the first three-star selected to lead the Navy since the Nixon administration tapped then-Vice Adm. Elmo Zumwalt to lead Navy in 1970.

“Adm. Gilday is a true cutting-edge warfighter, a surface warrior who, by virtue of his leadership at 10th Fleet, fully appreciates the challenges we face in the cyber warfare arena and the increasing pace of competition in new domains,” Richardson said.

Now Gilday, who has most recently served in the joint and cyber world, will now have to spin up to tackle the persistent maintenance and readiness bills the Navy racked up during the conflicts in Iraq and Afghanistan. The Navy is also in the midst of a force structure assessment that will chart out how the service will position itself for the potential peer conflict. Additionally, the service is at crossroads in how it will recruit and retain talent and train existing sailors for the anticipated tougher fights of the future.

Faced with a laundry list of challenges, “I know [Richardson is] leaving feeling secure and able to sleep at night because Adm. Mike Gilday is assuming the tiller,” said Secretary of the Navy Richard V. Spencer in brief remarks at the ceremony. “Gilday has already played a critical role in restoring readiness and he’s well-positioned to take over our integrated naval force as we march into the future.”

Gilday is a career surface warfare officer and a 1985 U.S. Naval Academy graduate.

Former Vice Chief of Naval Operations Adm. Bill Moran was originally nominated to serve as CNO but retired amidst an investigation into an ongoing professional relationship he maintained via email with a now-former public affairs officer who had been accused of mistreating multiple women at a 2016 holiday party.