As of late Monday, the Navy’s key research-and-development site for major aviation and weapons systems testing and evaluation remained off-limits to anyone but mission-essential personnel, as crews worked to inspect facilities at the sprawling installation complex.

China Lake, which covers 1.2 million acres of the Mojave desert, felt the brunt of the significant tremors, from the magnitude 6.4 earthquake that struck at the morning of July 4 to the scores of aftershocks and then a magnitude 7.1 earthquake on Friday evening.

U.S. Geological Survey experts identified the epicenters of the two largest tremors and countless others as occurring within the Navy installation. Navy personnel and California National Guard air crews assisted geologists in surveying the impacts of the tremors, which cracked paved roads, opened gashes across the desert area and shifted railroad tracks.

The weapons station, as well as nearby towns of Ridgecrest and Trona, saw scattered damage from the quakes but no deaths or major destruction.

As of Monday evening, China Lake officials had reported few details about effects to the weapons station and offered scant information in public updates posted on the weapons station’s official Facebook page. The installation’s spokesperson hadn’t responded to a USNI News query as of Monday night.

Basic services such as water and power have been restored in most areas of the base, China Lake officials wrote in a Monday post on Facebook. The weapons station’s Navy Exchange planned to reopen Tuesday, so mission-essential personnel could get supplies and other items. “The barbershop will also open, but patrons will need to be escorted inside the barbershop,” officials wrote in another post.

But the earthquakes damaged the installation’s All-Faith Chapel, which was established in 1944. “The NAWSCL Religious Ministries services are cancelled due to structural damage to the building. All personnel are encouraged to seek services out in town,” officials posted on Facebook. 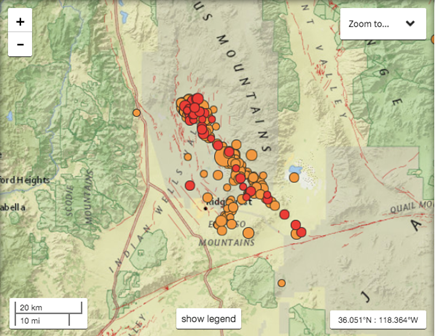 “The safety of our workforce is our priority. All are reminded to maintain high situational awareness,” installation officials wrote in a Facebook posting Monday afternoon

It’s unclear how many personnel and families opted to evacuate to Ventura County or other “safe haven” military installations, as the earthquakes happened over an extended holiday weekend for many military personnel.

“A diverse array of infrastructure and services exists on base and are spread throughout the installation’s approximate 1.2 million acres,” O’Rourke said. “Damage and structural assessment is a lengthy process after two major earthquakes and associated aftershocks.”

“Naval Air Weapons Station China Lake has completed assessments for 10 percent of approximately 1,200 buildings within the installation’s perimeter as of noon Monday,” he continued.
The installation’s “top priorities are safety of personnel, security of capabilities, reconstitution of infrastructure, and the systematic progression to full mission capability. The installation remains at Mission Essential Personnel (MEP) status,” he added.

Personnel looking for additional information can contact the Family Information Call Center at (844) 523-2025.

“Some essential facilities on the installation that service the city of Ridgecrest and surrounding area remain a top priority,” O’Rourke added.

The weapons station, about 150 miles north of Los Angeles, stretches northeast from Ridgecrest, a high-desert desert town of 28,000. The installation includes several significant cultural or archaeological areas, including the Coso Rocks, a national historic landmark.

The magnitude of Thursday’s earthquake is the largest to strike California since Oct. 16, 1999, when the Hector Mine quake, measuring magnitude 7.1, jolted Marines and other Southern Californians awake at 2:46 a.m. from the epicenter in the northwest portion of the Marine Corps Air Ground Combat Center at Twentynine Palms.