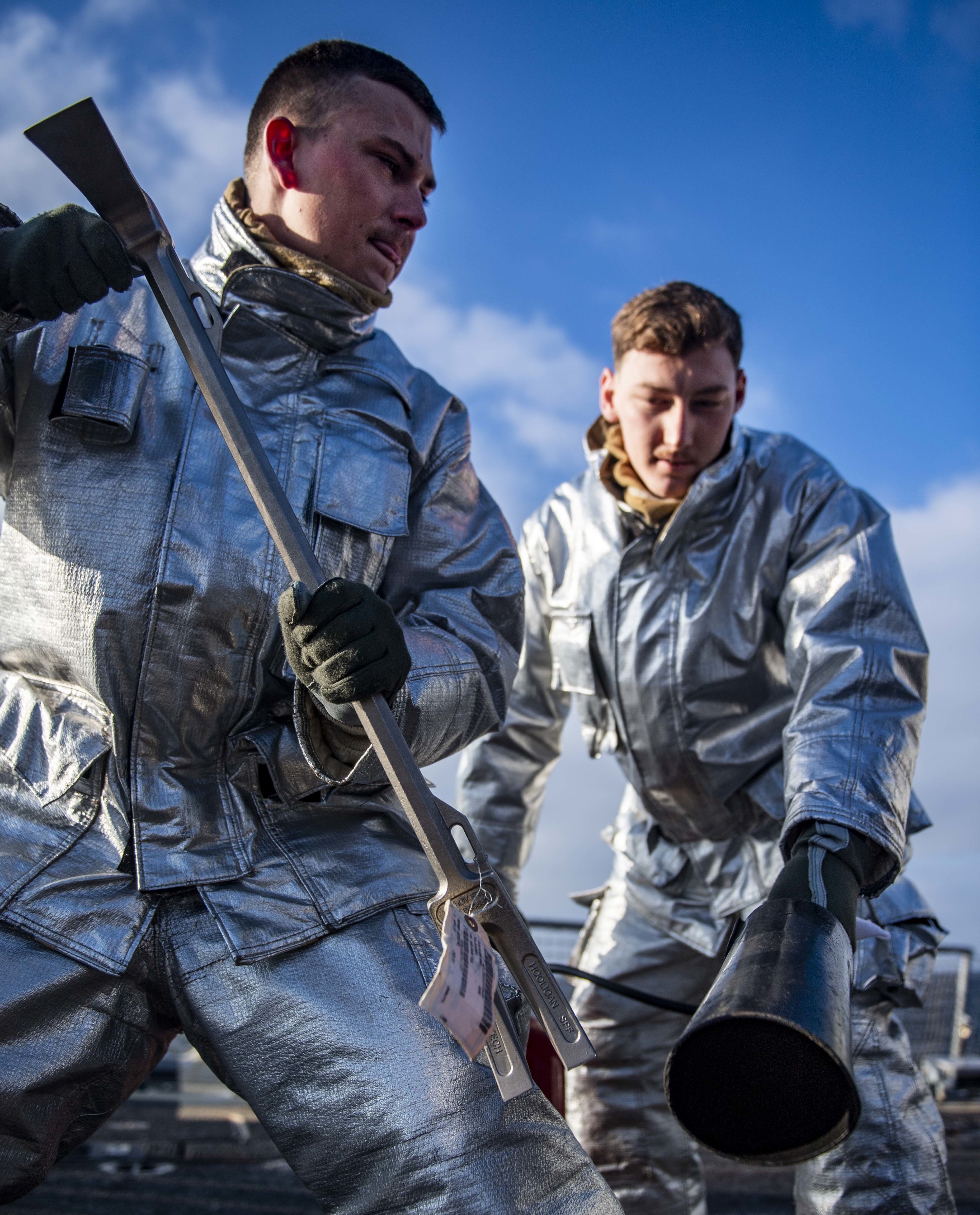 The U.S. Navy and its partners in Central and South America just wrapped up the UNITAS 2019 Pacific exercise, with a U.S. destroyer leading the 13-nation force through an anti-submarine and surface warfare drill.

In the 60th iteration of the annual exercise in U.S. 4th Fleet, the forces melded sea- and air-control skills with humanitarian assistance and disaster relief practice, to ensure the partners could come together if needed for a range of missions.

“For an exercise to be able to run for 60 years shows its value, I think, that the nations keep coming back every year because they get something back for it. What they get back is proficiency in their teams, the ability to come together in a crisis and already know how to connect on a human level and on a system level to work on harder problems,” 4th Fleet Commander Rear Adm. Don Gabrielson told USNI News on July 3.

The exercise included more than 1,800 people, including more than 600 from the United States and 600 from host nation Chile, which helped design the exercise based on its areas of interest and commanded a task force during the at-sea exercise, he said. U.S. forces included Arleigh Burke-class guided-missile destroyer USS Michael Murphy (DDG-112), P-8A Poseidons from Patrol Squadron (VP) 4, divers from Mobile Diving and Salvage Unit 2, Destroyer Squadron 40 staff serving as the warfare commander at sea, and 4th Fleet staff running the exercise overall. Gabrielson said Michael Murphy was the largest ship in the exercise, but he also oversaw a force that included “everything from small patrol boats up to corvette- and frigate-sized ships.”

Michael Murphy Commanding Officer Cmdr. Christopher Forch told USNI News in a separate July 3 interview that his crew had the chance to perform close-quarter shiphandling operations such as a photo exercise and gunnery exercises, personnel cross-decking and other activities with partners that the Hawaii-based destroyer typically doesn’t have a chance to work with.

He said the destroyer also got to practice hunting for diesel submarines – a unique opportunity, since the U.S. Navy has only nuclear-powered submarines and therefore the usual force-on-force exercises within the Navy can’t fully replicate hunting for a diesel-powered sub. 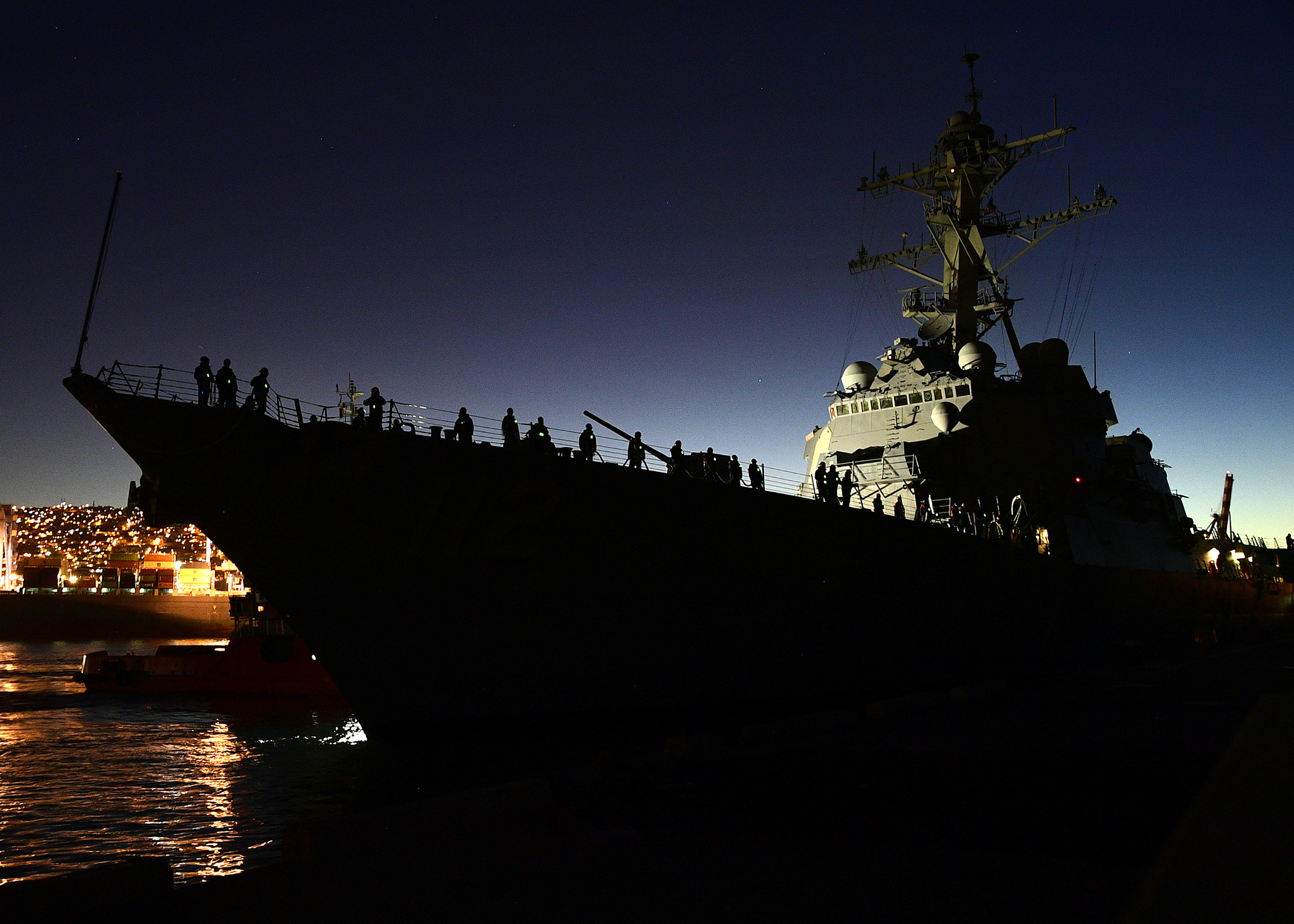 USS Michael Murphy (DDG-112) returns to port in Valparaiso, Chile after completing the execution phase of UNITAS LX on July 2, 2019. US Navy Photo

“The sailors of Michael Murphy are absolutely enjoying this UNITAS exercise. We’ve got to practice a lot of skills that we normally don’t get to, gotten to operate with the superb naval force that’s the Chileans,” Forch said, adding that the destroyer would also stick around for a week-long Teamwork South bilateral exercise with the Chilean Navy that would include anti-submarine, surface and air warfare activities. The DDG will begin making its way back home to Pearl Harbor later this month after the exercises wrap up.

Asked how the partner nations’ regional security concerns in 4th Fleet compare to those in Michael Murphy’s typical operating areas – U.S. 3rd and 7th fleets – Forch said the UNITAS 2019 Pacific partners were concerned with “protecting their sea lines of communications, protecting their natural resources. There are various countries at play throughout the world who are encroaching on those natural resources, and the U.S. providing a presence here definitely helps solidify our mutual goals to each nation so they understand we’re here to help you out, we’re here to make sure you can guard your resources, and if you ever are in need of anything the United States will come down and help you out.”

Gabrielson echoed those comments, noting the importance of the U.S. being now and into the future the preferred partner for Central and South American militaries to want to work with.

“In this complex world we need to be able to work together with other nations. Most of the problems we face today are not unilateral problems, they’re shared problems between different nations. So we come together to work on our ability to connect together out at sea and operate together,” he said.
“As I mentioned already, anti-submarine warfare, surface warfare, some air defense, the ability to control sea space and the ability to control air space, the ability to go out and help others in need – whether it’s search and rescue, whether it’s diving and salvage, whether it’s helping people ashore after a disaster or some other kind of condition that requires response. Those are all the things that people are interested in each year.” 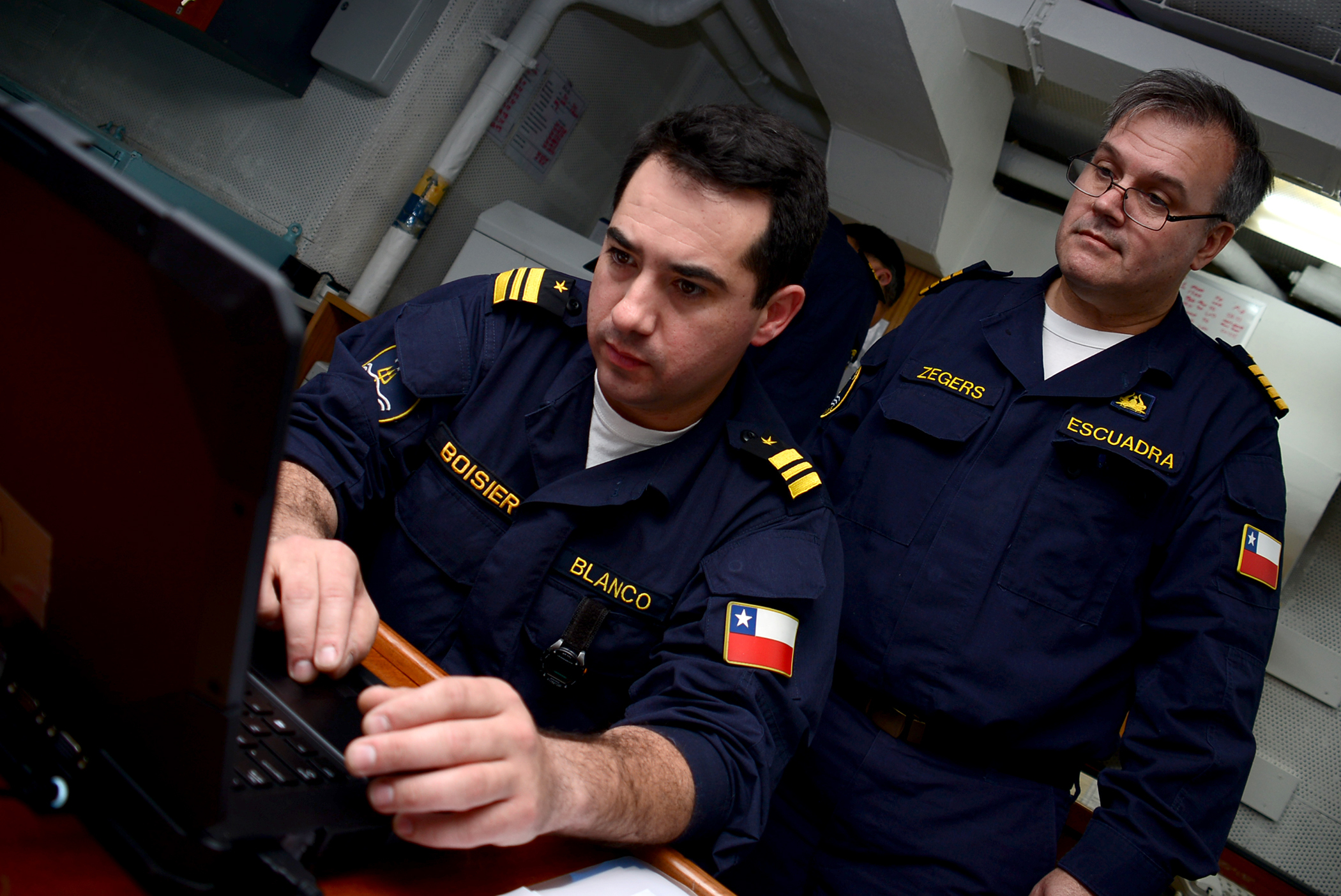 This year’s UNITAS Pacific exercise sought to incorporate all those operations together. During the free-play phase at the end of the exercise, Forch said, the scenario was that the fictional country of Orange had a humanitarian assistance/disaster relief situation brewing on its shores but didn’t want the U.S.-led forces to come ashore to provide aid. Michael Murphy led a force through submarine-hunting activities to ensure the waters were cleared for forces to go ashore and provide aid to those in need.

While the activities within UNITAS provided experience and lessons learned for the participating forces, so too did the sheer presence of a U.S. destroyer in the 4th Fleet area of responsibility (AOR). With 4th Fleet not having any ships forward-deployed to its waters or regularly cycling through on deployment, having a destroyer off the western coast of South America provided some lessons learned for future ships operating in the area.

On the logistics of operating there, Forch said, “there are only limited places where we were able to get fuel in this AOR. Luckily, Chile has got a reliable source: they’ve got oilers, we were able to do unreps with the oilers. We did an unrep with the Araucano (AO-53). … And we also were able get fuel in Panama, and we’re planning to get fuel in Peru when we pull in,” he said, but the limitations on where the ships can fuel up complicate planning efforts compared to some other theaters where the Navy is more accustomed to operating and has a more established logistics chain.
“Mail and those things are all basically taken to Florida, all of our parts and everything are routed through Florida into the AOR, and so there’s a time delay in getting those materials to us.”

The weather, too, is vastly different than operating in other theaters and took some adjustment for the DDG crew.

“We are operating in the Southern Hemisphere; there is not as much land mass in the Southern Hemisphere as there is in the Northern Hemisphere, so storms and distant weather phenomenon actually carries further than it does in the Northern Hemisphere. The seas are rougher, the winds and seas are a little bit more difficult to deal with,” Forch continued.
“The other thing you have to deal with is, due to the location of Chile, there’s the potential for earthquake, tsunamis; we’re on a 30-minute requirement to get underway at all times from Valparaiso due to the nature of the harbor and the way it’s designed and the potential for a tsunami.” 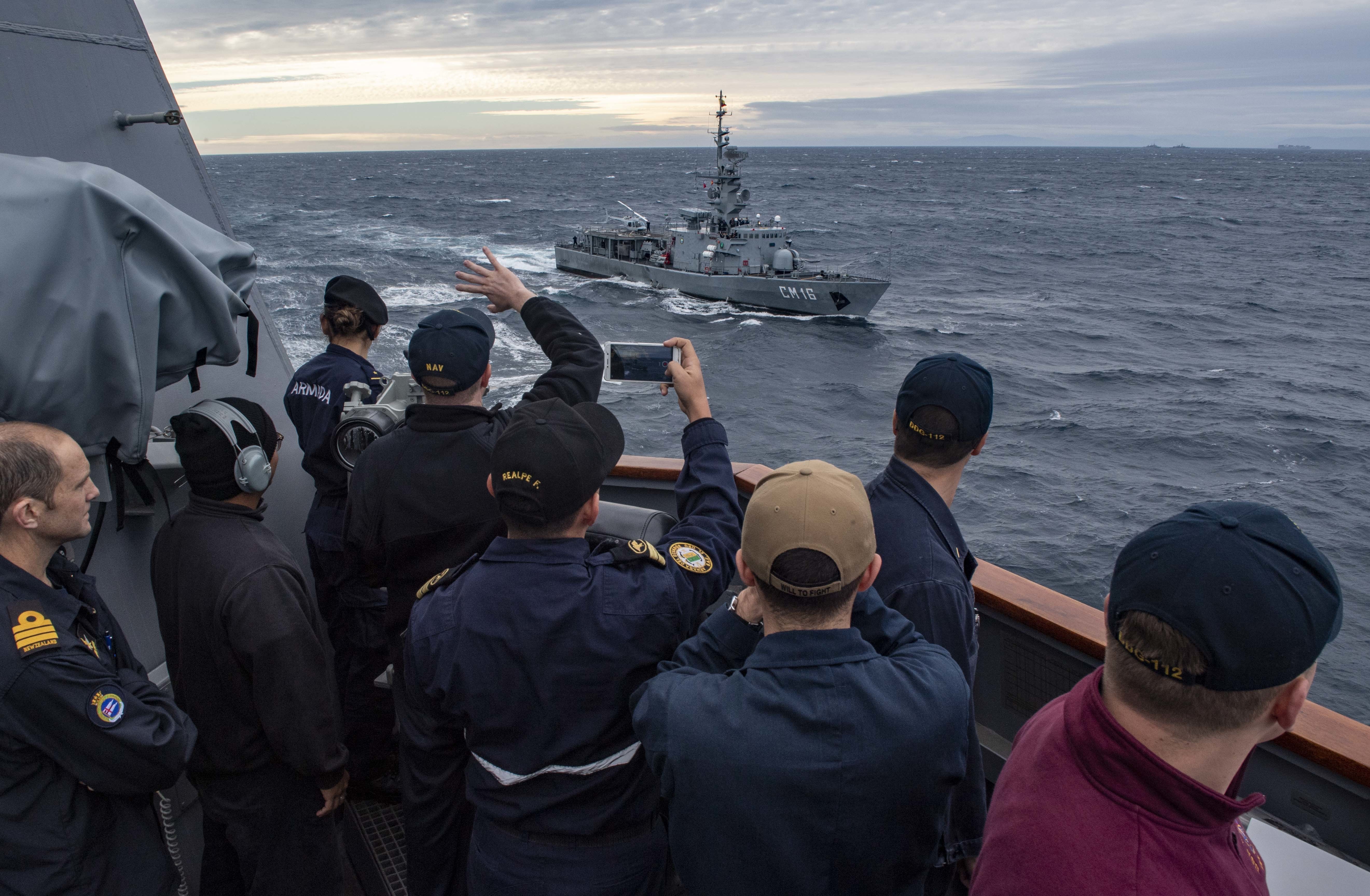 Forch said the weather cooperated for the free-play phase, but early on in the exercise the destroyer’s helicopters were limited in their operations due to the wind and sea states. Many of the sailors on his crew were also sea sick early on because “the seas were definitely rougher than what we normally operate in.”

Planning is already underway for UNITAS 2020 Pacific, which Ecuador will host for the first time. In the more immediate future, Brazil will host next month’s Atlantic portion of UNITAS 2019.

“They’re not the same exercise and they’re not the same operators within the exercise,” Gabrielson said, noting that the host countries help shape the goals of each iteration of the exercise.
“The Atlantic version we will be doing … will have an amphibious portion of the exercise because that’s what our partners wanted to take a look at, so we’ll include some other capabilities from the U.S. side, including our Marine Corps and other amphibious capabilities from ships and sailors.”