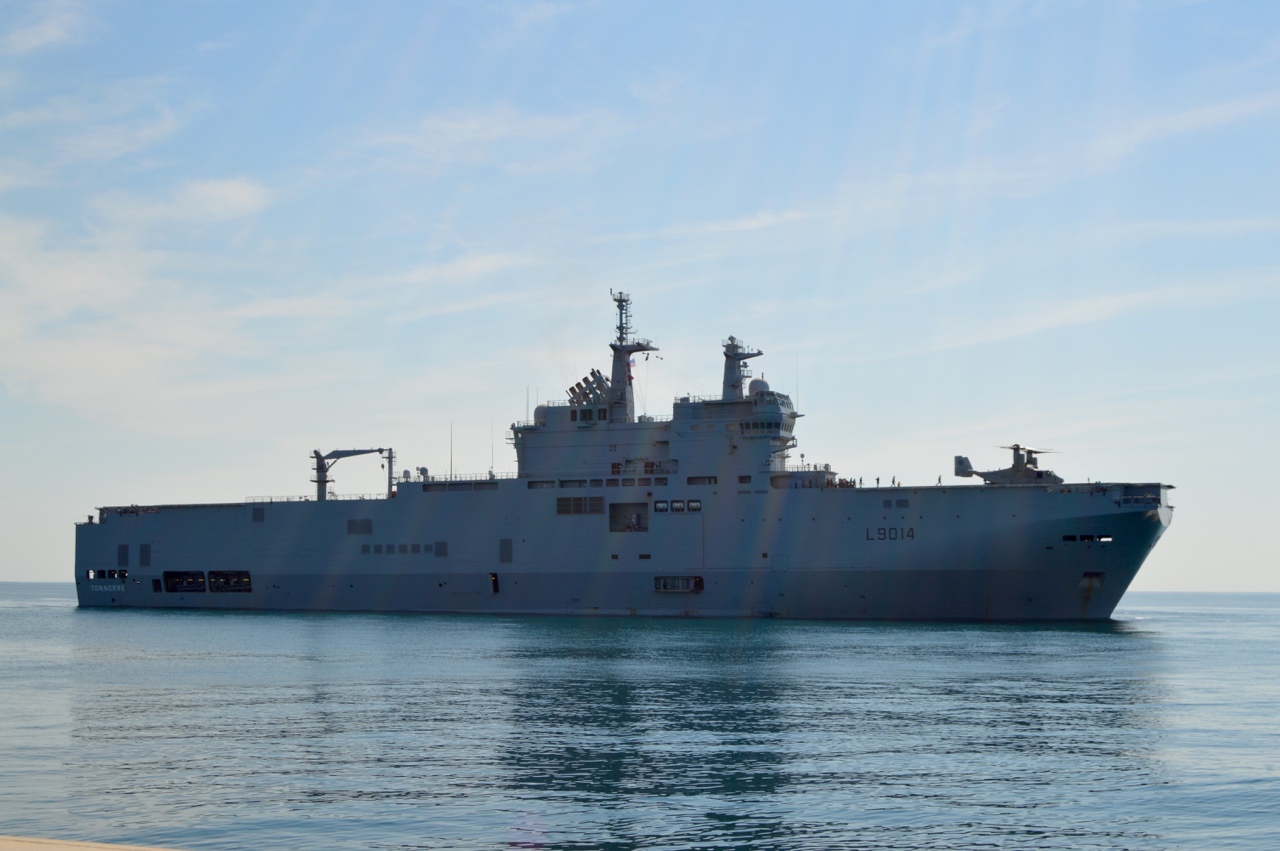 ABOARD FS TONNERRE, OFF CAMP LEJEUNE – A French task group on deployment with 130 officer cadets teamed up with U.S. Marines from the 26th Marine Expeditionary Unit in Camp Lejeune for a few days of at-sea amphibious operations in North Carolina.

26th MEU is in the early stages of its pre-deployment training, and the Amphibious Task Force Jeanne d’Arc 2019 is nearing the end of its five-month mission through the Middle East, around Africa and up the Atlantic coasts of South and North America.

Ahead of the Jeanne d’Arc task force’s return home to France, the ships and the cadets joined up with elements of the 26th MEU to practice skills that they ultimately could be called upon to perform together in real-world operations.

“This training opportunity is a great moment for us, for the United States Marines and French amphibious forces to integrate and build upon our interoperability for future exercises and operations. This is very important because you cannot build trust, confidence and interoperability at a moment’s notice for a crisis. That’s why we have historically conducted bilateral and multilateral exercises … and why we will continue to do so in the future,” 26th MEU commanding officer Col. Trevor Hall told reporters aboard landing helicopter dock FS Tonnerre (L9014).

“As we move forward and we look at future engagements, whether they be across the range of military operations, building a coalition – especially with our NATO partners – builds so much more capacity where we can operate globally in the world and be postured for any unforeseen crisis,” he continued.
“Moments like these, the ability to train together, build upon this integration, is what allows us to do that.”

During the exercise – dubbed Semper Thunder, to honor the U.S. Marines’ slogan and the translation of Tonnerre’s name – the forces first began by integrating parts of the 26th MEU with French navy and army counterparts. The MEU’s maritime raid force did much of the early work, working with French forces to conduct hydrographic surveys of possible landing zones and conduct small boat operations from Tonnerre’s well deck. 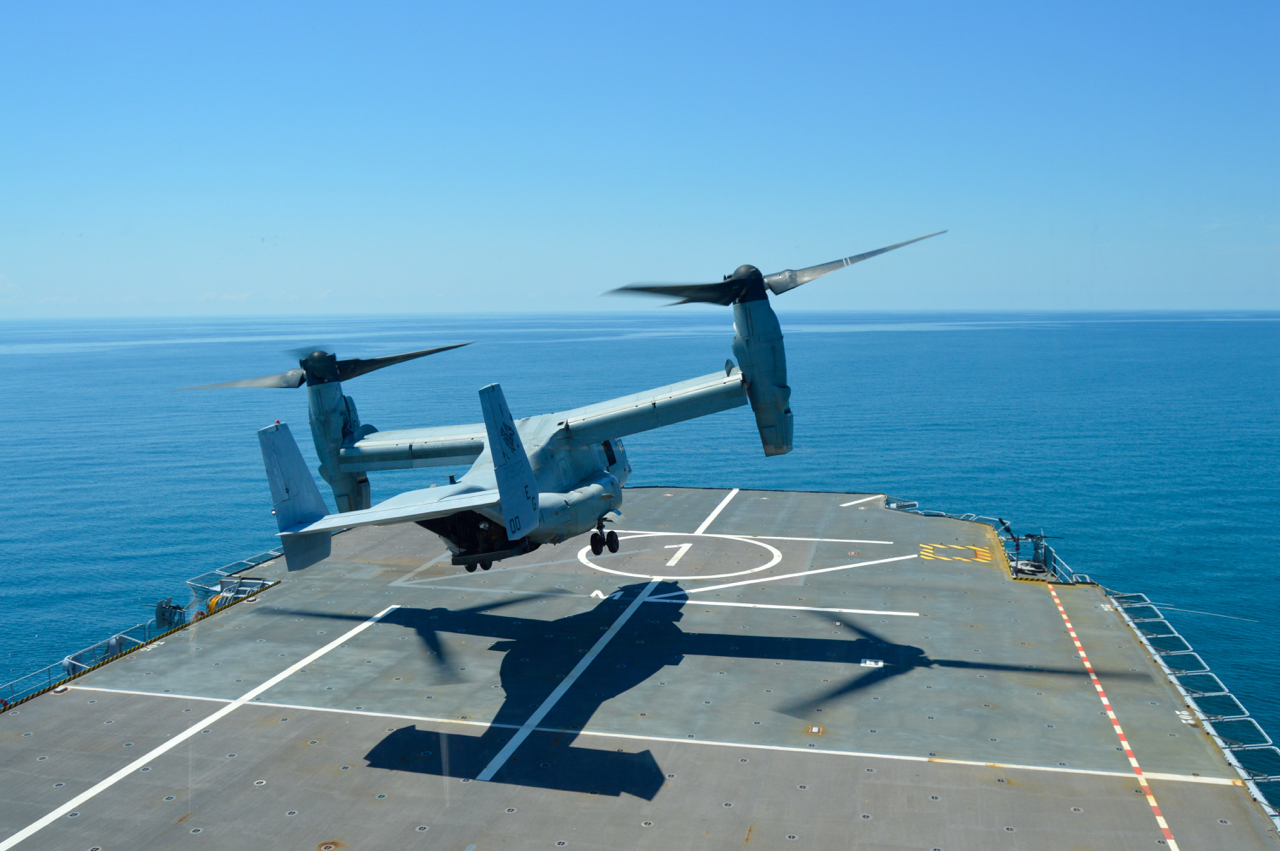 On June 28, Marine Medium Tiltrotor Squadron (VMM) 263 began conducting deck landing qualifications with two of its MV-22 Ospreys aboard Mistral-class amphib Tonnerre. VMM-263 tends to operate as a land-based detachment rather than on ships as part of a MEU, and so conducting operations at-sea from the French amphib was a unique opportunity for many of the pilots and aircrew involved, 26th MEU spokeswoman Capt. Melissa Heisterberg said. The opportunity was also unique for the French: whereas the French Army Aérospatiale Gazelle helicopter is about 39 feet long with a rotor diameter of about 34 feet, and the French Navy Aérospatiale Alouette helicopter is about 32 feet long with a rotor diameter of 36 feet, the V-22 is a whopping 84 feet wide between the wings and nacelles and is 57 feet long, making it by far the largest aircraft the Tonnerre crew has landed on its flight deck.

After those initial efforts to build familiarization with each other, the French and U.S. forces then planned to conduct a full amphibious operation: using the ship as a forward base, the landing forces would secure a beachhead, move troops ashore to secure a larger area, send forces farther inland to recover personnel to bring back to Tonnerre, and then pull all forces from the beach back to the ship, Tonnerre Commanding Officer Capt. Ludovic Poitou told USNI News aboard the ship.

“Our standard amphibious procedures are similar in that they all stem from the NATO procedures, which we all implement. Then we have our specifics that we will be exchanging throughout the exercise today and in the forthcoming days, whether we use air power or sea power to project forces from a ship towards the land,” he said when asked how the U.S. and French equipment and tactics are similar or different.
“So all these differences are really added forces, when you put them together, to complement each other.” 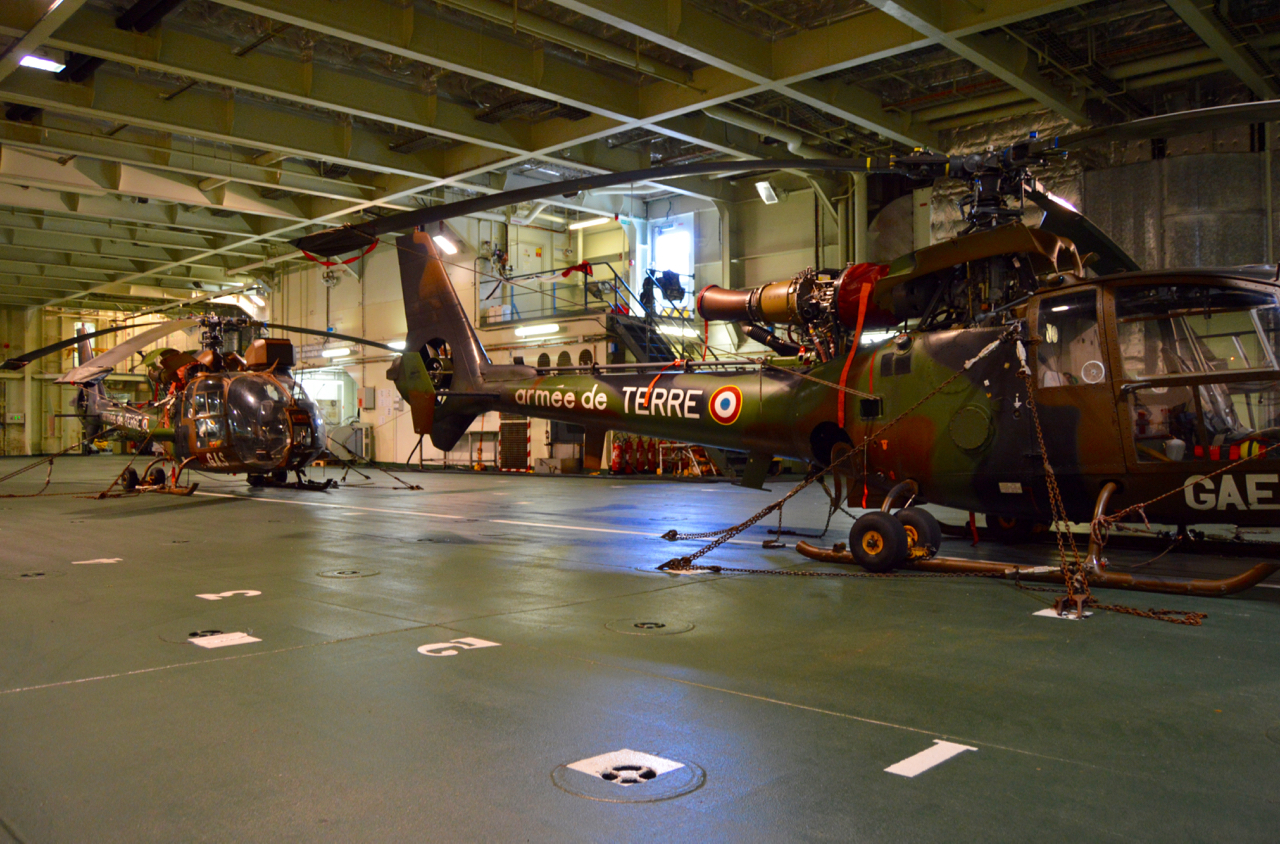 For the Americans, these few days at sea with a NATO ally is one piece of a larger demonstration of commitment.

“This exercise demonstrates a strategic-level commitment by the U.S. and France to the defense of Europe through a highly interoperable NATO,” Lt. Gen. Brian Beaudreault, commander of II Marine Expeditionary Force, told USNI News in a statement.
“At the tactical level, this was a great opportunity for U.S. Marines from II MEF and our French counterparts to conduct some practical application of our warfighting skill sets that will lead to greater integration of our forces. Engagements like this provide both countries an outstanding venue to learn from each other, to learn about each other’s capabilities, and ultimately enhance our long-standing relationship. We appreciate our French partners making the trip to train with us off the Carolina coast, and we look forward to training with them in the future.”

For the French, this was the last stop in a five-month voyage that sought to show young officers not only what life at sea was like, but also what it will be like to operate alongside or integrated with allies and partners in future operations.

A French landing catamaran (LCAT) approaches Onslow Beach at Camp Lejeune, N.C., on June 28, 2019, as a French LCU landing craft and amphibious ship FS Tonnerre operate in the Atlantic Ocean behind it. Tonnerre came to Camp Lejeune as part of its Jeanne d’Arc 2019 deployment, in an exercise with the U.S. Marine Corps called Semper Thunder. USNI News photo.

Nicolas, a cadet who is studying to become an aircraft maintenance officer, told reporters that, for the officers-in-training, “before going to the mission, we only had theoretical training, and so this mission here is our real chance to discover operations as they are in the real world. It’s a unique opportunity to discover inter-ally operations and maritime exercises.”

The French Navy does not allow the release of the full names of some of its personnel, including cadets.

Another cadet, Antoine, told USNI News that there were also young officers from the United Kingdom, Egypt, Morocco, Congo, Brazil and Australia onboard. Antoine is training to become a detection officer in charge of radars and electronic warfare, as well as an officer of the bridge in charge of navigation. During this deployment, he said he has tried to make the most of interacting with his foreign counterparts to understand their best practices and to share what he has learned in his two and a half years at the École Navale. 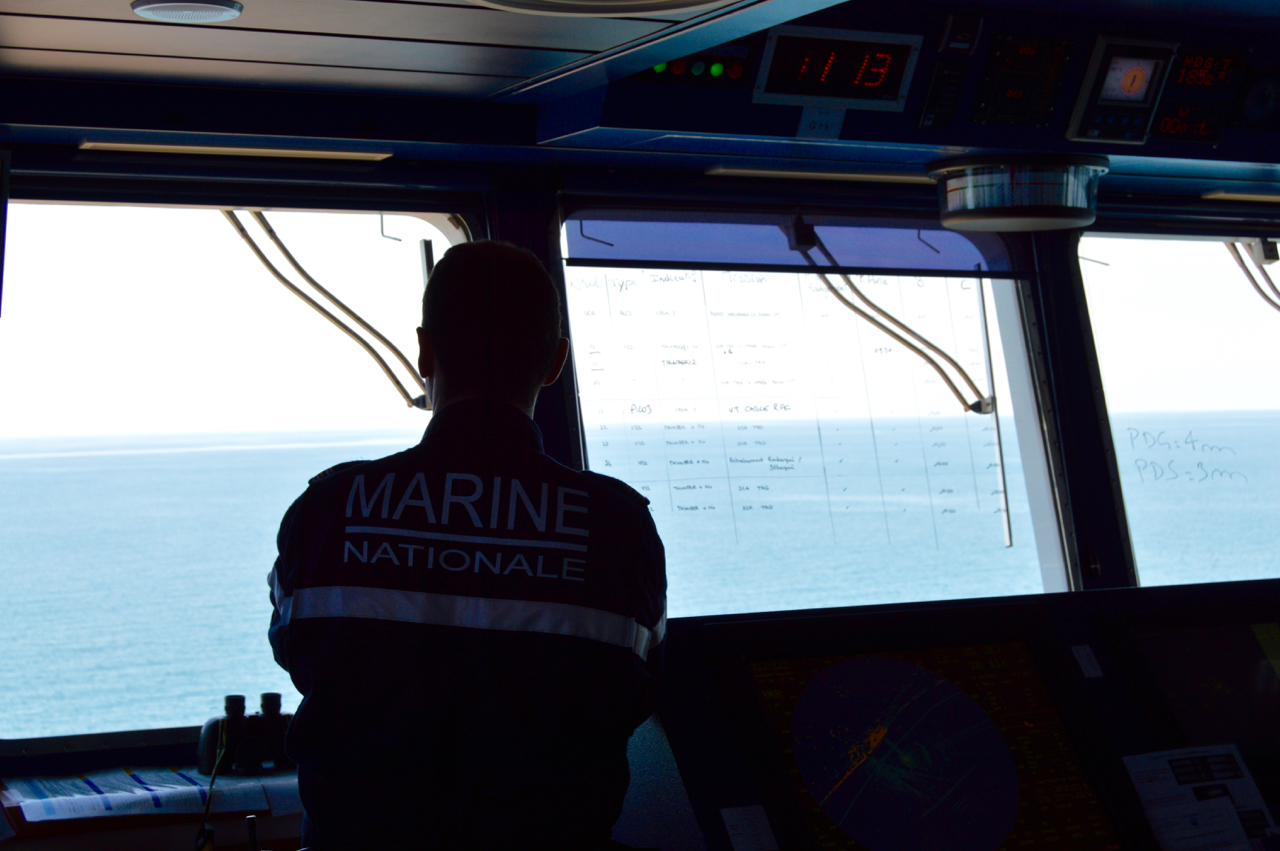 The Task Force Jeanne d’Arc 2019 includes Tonnerre and frigate FS La Fayette (F710), as well as 130 cadets and young officers, the ship’s crews to mentor them, 150 soldiers from a French Army tactical group, and two Gazelle helicopters and their crew. The task group departed Toulon, France, on Feb. 25 and conducted amphibious exercises in Egypt and then in Djibouti in March, a humanitarian assistance and disaster relief mission in Mozambique after a hurricane hit in April, an amphibious exercise in Brazil in May, a HADR bilateral exercise with the Dutch Navy in the West Indies, and then the Semper Thunder exercise at Camp Lejeune. The cadets will have a final exercise in France before their return home and their commissioning as officers.

The task force has four missions: on-the-job training for cadets and young officers; interoperability and international cooperation; naval support to diplomacy; and an operational deployment to areas of strategic interest to France, highlighted by the ability to integrate into existing operations in the Mediterranean and Arabian Sea that France routinely contributes to and the execution of maritime patrols to ensure the sovereignty of French territorial waters;

Poitou, the Tonnerre captain, said the melding of the operational missions and the focus on interoperability with allies and partners gives the cadets involved in Jeanne d’Arc 2019 a realistic view of what to expect when they enter the fleet.

“For the young officers who are onboard before they are commissioned in a few months, to be able to train with their future partners is paramount in their training and curriculum.”