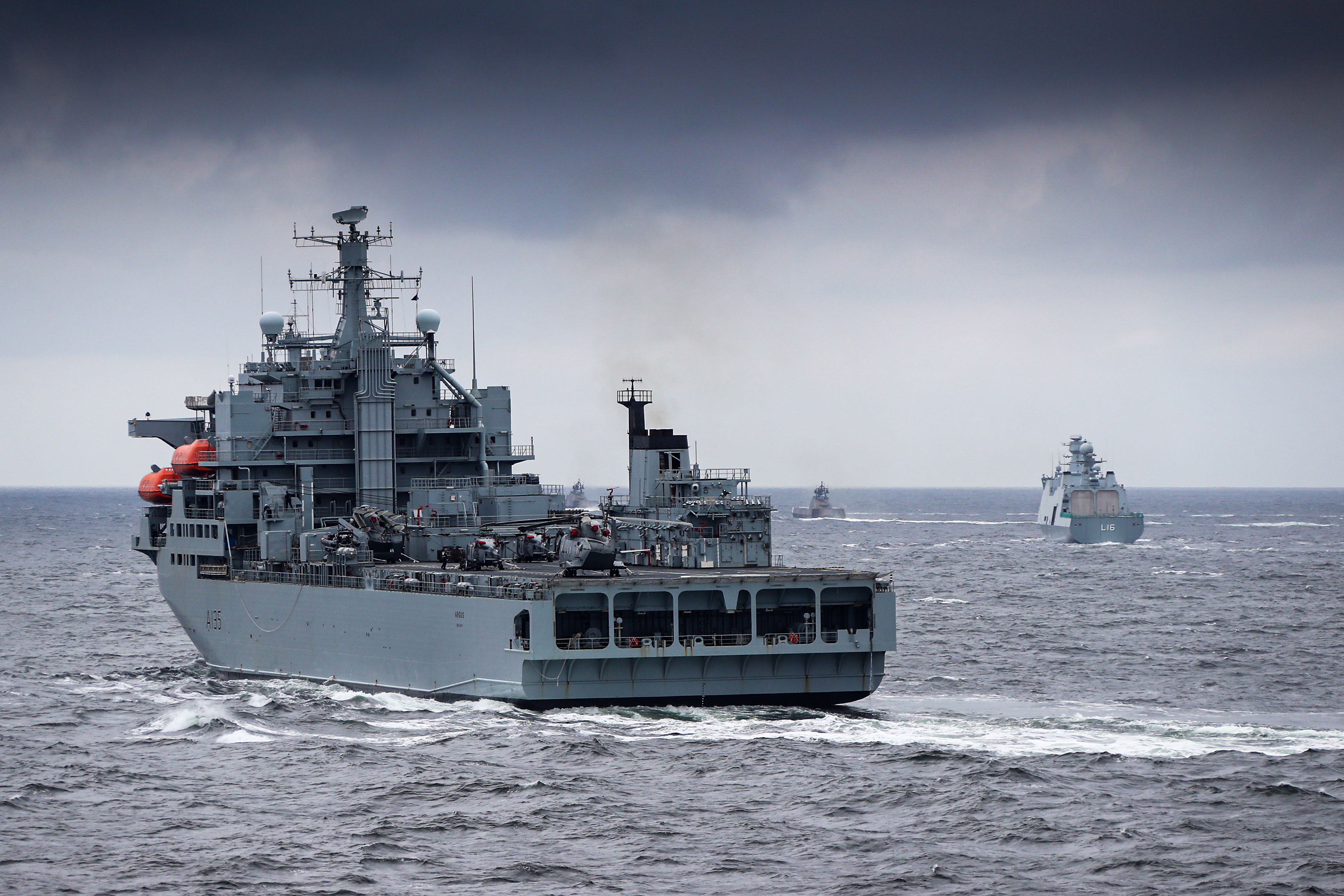 HMS Albion (L14) conducted officer of the watch maneuvers today (25th May 2109), in company with HNLMS Johan de Witt (L801), HDMS Absalon (L16), RFA Argus (A135), HNoMS Glimt (P964) and HNoMS Steil (P963). The maneuvers are a test for the bridge team, operating in such close proximity to the other ships in the task group. HMS Albion is currently deployed on Baltic Protector 19, the inaugural deployment of Joint Expeditionary Force (Maritime). Royal Navy photo

ABOARD HMS ALBION, IN THE BALTIC SEA – The U.K. and its partners are testing out a first-responder force that could beat NATO to the punch if a crisis were to occur in Northern European waters.

The nine-nation Joint Expeditionary Force (Maritime) was formally created a year ago and is being tested at sea for the first time this month, using the BALTOPS 2019 exercise as the second of three phases of the Baltic Protector Deployment 2019.

With increased Russian naval activity making some in Northern Europe feel less secure, this inaugural deployment is meant to show that “the JEF may be able to act before NATO can” and can be viewed as “a more immediate reassurance policy for them,” Royal Marines Brigadier Matt Jackson, commander of 3 Commando Brigade and the head of the land forces in this JEF(M) deployment, told USNI News while aboard flagship HMS Albion (L14).

The United Kingdom is the “framework nation” that spearheads this military effort. The idea to create a high-readiness force dates back to 2012 and was renamed the JEF during the U.K.’s defense review in 2015. Other nearby militaries showed interest in joining the group, and last year a memorandum of understanding was signed by the nine countries – the United Kingdom, Denmark, the Netherlands, Norway, Estonia, Latvia, Lithuania, Finland and Sweden – to state that “we are the Joint Expeditionary Force, and we exist to operate together from everything from low-end humanitarian aid up to high-scale combat operations,” Royal Navy Commodore James Parkin, the commander of the U.S. Amphibious Task Group, told USNI News in the at-sea interview.

Parkin said the key to the JEF(M) is that the participants all want to operate together to ensure the security of the Baltic Sea, North Sea and other waters in their areas of interest, but they are not obligated to act as a full nine-member group. If a crisis occurred and only some wanted to respond immediately, Parkin said, they would still view that as a JEF(M) task group.

“It’s a really useful way of producing a framework for a coalition of the willing without that being the equivalent of an Article 5,” he said, noting the collective defense obligations of NATO and the requirement for a consensus before taking military action.

“A JEF task group would probably be first on the scene because we’re already in the area where the crisis is in Northern Europe, wherever that may be,” he said.
“And then probably we would then fit into a larger task group when NATO were activated, if that were to happen. That’s really what we’re looking at now.”

Jackson put it bluntly: “the JEF can act while NATO is thinking,” he said is an oft-used phrase.

Jackson said with the U.S. Navy often focused on the Middle East or Pacific, “I think what we provide as European nations is the forward-deployed force into which the U.S. can plug. So I think we are a socket.”

The beauty of BALTOPS falling around the same time as the planned inaugural deployment of the JEF’s maritime component is that the JEF(M) task group could go to sea to work out its own internal command and control (C2) structure, then fall under a larger task force in BALTOPS – as would likely be the case in a real-world event, when follow-on forces flow in – and then return to operating on its own afterwards. The Baltic Protector deployment runs from May 24 to July 9 and includes a Phase 1 off Denmark, Phase 2 as part of the BALTOPS 2019 exercise, and Phase 3 reverting back to JEF(M) operations only off Estonia, Latvia and Lithuania.no

“The big thing it helps us test is the U.S./U.K. C2, and the JEF/U.S. C2, because I think if you’re talking about the world being a more contested place and the kind of arrangements that we may or may not have in the event of any crisis, what it does do, I think, is really allows us to test the command and control arrangements and the connectivity,” Jackson said.

That command and control issue is important, given the makeup of the JEF(M). Though Finland and Sweden often exercise with NATO, they are not NATO members. And the United States is a NATO member and often leads NATO exercises – as is the case now, with U.S. 2nd Fleet commanding BALTOPS 2019 – but the U.S. lingo, tactics and more doesn’t always match NATO’s.

Getting the JEF(M) task group together both with and without additional forces ensures that the JEF(M) nations can become comfortable working on their own and also working as a task unit under the command of a larger force. 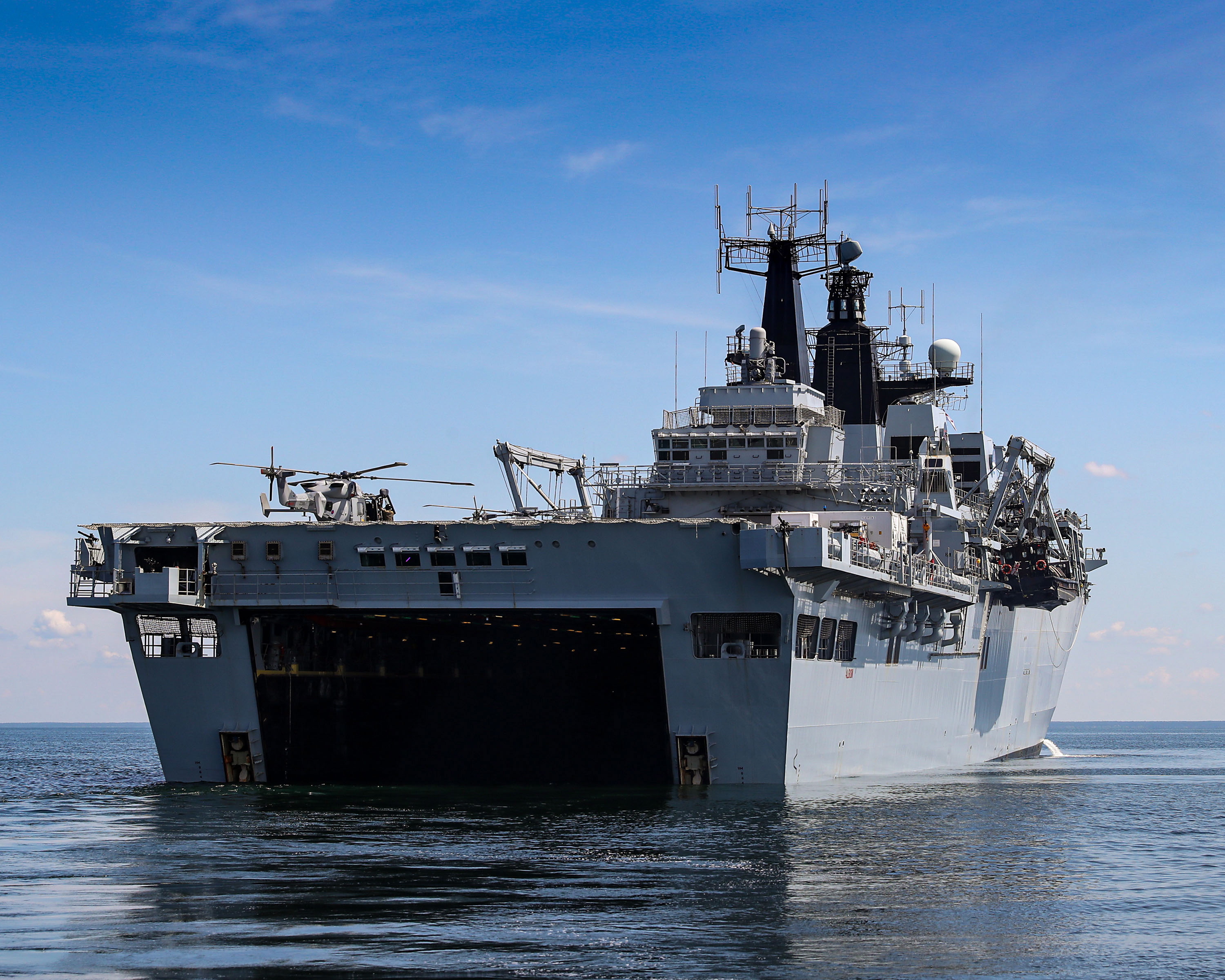 HMS Albion docked down on June 15, 2019, for the rehearsal for the DV Day (Distinguished Visitors) as part of the demonstration by partner nations on Exercise BALTOPS 2019, in Lithuania. Royal Navy photo.

Though the construct is new, the pride and camaraderie among the group is already clear.

Parkin, talking about various parts of the BALTOPS exercise, repeatedly referred to other countries’ assets as JEF(M) ships. In describing American destroyer USS Ross (DDG-71) having to pull out of its role protecting another amphibious task group in BALTOPS and being replaced by Danish ship HDMS Absalon (L16), Parkin talked about having a JEF(M) ship in that role.

Asked about that allegiance so early into the Baltic Protector deployment, he said, “because we’ve worked up together, I know the Absalon is one of the most capable ships in my JEF task group. Therefore, I’m proud I can allocate her to another unit, and she’s proud that she’s being trusted enough to go and work with a nation with whom she doesn’t routinely operate,” he said, referring to the other task group with American, Polish, Spanish and German ships.

Parkin said it was unclear what the next big JEF(M) deployment might look like. The exercise program is being written now and will depend on JEF members’ commitment and willingness to devote resources to exercises or deployments. But Parkin came back to the idea that gathering some of the nations together was beneficial, even if all nine aren’t present at the same time.

“We’re operating together off Norway in 2020, three of our nations; yep, that’s a JEF task group. I only had four in the first phase (of Baltic Protector) – so U.K., Netherlands, and Norway operating together off [Denmark], that’s great, that’s a JEF exercise. What I don’t know at the moment and what we are literally talking about this week is what the next big huge JEF-specific task group looks like, and that’s something we’re working towards,” he said.

Jackson added that “we need to get the periodicity defined,” but he offered that “Baltic Protector was designated the U.K. Defence’s main effort for this year, so I think that is a big indication of people’s interest in it.”

Though the U.K. is providing its Northern European allies a framework to plug into – and some of the logistics and command and control capabilities that perhaps not all navies have on their own – the JEF(M) isn’t totally altruistic on the Brits’ part. It is helping prove the importance of an amphibious force that just recently was being questioned domestically.

“We are in a period of regeneration of our own sovereign amphibious capability,” Jackson said, noting that three or four years ago people were questioning whether the U.K. really needed its own amphibious force.

“The U.K.’s Navy has very firmly stated that amphibious warfare is a part of the future, and this, now, therefore I think is a manifestation of that,” he continued.
“So we’re on our amphibious regeneration of our capability. We’ve done all sorts of first: we’ve integrated our pre-landing force with Norwegian fast patrol boats and inserted them covertly. We’ve done direct para-drops from the U.K. into the Oksbol Danish training area – that is a strategic insertion. We’ve done a huge amount in diving, covert diving, diving reconnaissance. We’ve done some key activity in this deployment that we haven’t done for a while. It’s significant.”

Asked if the JEF(M) would change how the U.K. trains or equips its own amphibious forces at home, Parkin said, “in theory, no, because the way in which the defense ministers and the armed forces have signed the agreement is, we’re using NATO doctrine even though two of the nations are not NATO. … We’re using the same tactics and techniques and procedures that we would anyway.

“But, what we are finding is, that’s really easy to say but particularly difficult to do. So we’ve never operated with a Norwegian fast patrol boat before doing amphibiousity. And we’ve changed what we’re doing today on the basis of what we learned two weeks ago, which is that if you want to put an under-the-radar special reconnaissance squadron ashore, don’t do it with an inflatable boat, do it in a Norwegian stealth corvette that goes at 60 knots – six zero knots. … And that’s what they’re doing right now off the coast of Ravlunda: the SRS, the surveillance reconnaissance squadron, are inserting stealthily by that,” Parkin continued.
“So I can read as many TTPs as I want, but unless you practice it and learn from each other. Another one is IT (information technology) – it took us a week to get the IT sorted. The Danish and the Brits have got the same crypto in theory, but in practice, they weren’t quite talking to each other and it takes senior enlisted personnel and IT experts to bang heads together. Now it’s working fine. But had the first week actually been a week of live action, that would have been really difficult. So we now know.”