This post has been updated with a statement from U.S. Air Forces Central Command and comments from President Trump.

A Navy high-altitude surveillance unmanned aerial vehicle was shot down by a surface-to-air missile in the vicinity of the Strait of Hormuz by the Iranian Revolutionary Guard Corps, the IRGC announced on Thursday.

The IRGC claimed the UAV was operating over Iranian airspace and that the shootdown was to send a “clear message” to Washington, said IRGC commander Gen. Hossein Salami, according to ABC.

“The message is that the guardians of the borders of Islamic Iran will decisively respond to the violation of any stranger to this land. The only solution for the enemies is to respect the territorial integrity and national interests of Iran.”

U.S. Central Command confirmed the shootdown of a Navy derivative of the RQ-4A Global Hawk in a follow-on statement but called the attack “unprovoked” and said the UAV was operating over international air space.

“A U.S. Navy Broad Area Maritime Surveillance (or BAMS-D) ISR aircraft was shot down by an Iranian surface-to-air missile system while operating in international airspace over the Strait of Hormuz,” CENTCOM spokesman Capt. Bill Urban said in a Thursday statement.
“Iranian reports that the aircraft was over Iran are false. This was an unprovoked attack on a U.S. surveillance asset in international airspace.”

In a statement, U.S. Air Forces Central Command commander Lt. Gen. Joseph Guastella said the BAMS-D was flying a surveillance mission over the Gulf of Oman and the Strait of Hormuz when an IRGC surface-to-air missile was fired from the Iranian coast.

“A U.S. Navy RQ-4 was flying over the Gulf of Oman and the Strait of Hormuz on a surveillance mission in international airspace in the vicinity of recent IRGC maritime attacks, when it was shot down by an IRGC surface to air missile fired from a location in the vicinity of Goruk, Iran,” Guastella said in a brief statement to Pentagon reporters on Thursday.
“At the time of the intercept, the RQ-4 was operating at high-altitude approximately 34 kilometers from the nearest point of land on the Iranian coast. This dangerous and escalatory attack was irresponsible and occurred in the vicinity of established air corridors between Dubai, UAE, and Muscat Oman, possibly endangering innocent civilians.”

Guastella did not take questions from reporters. 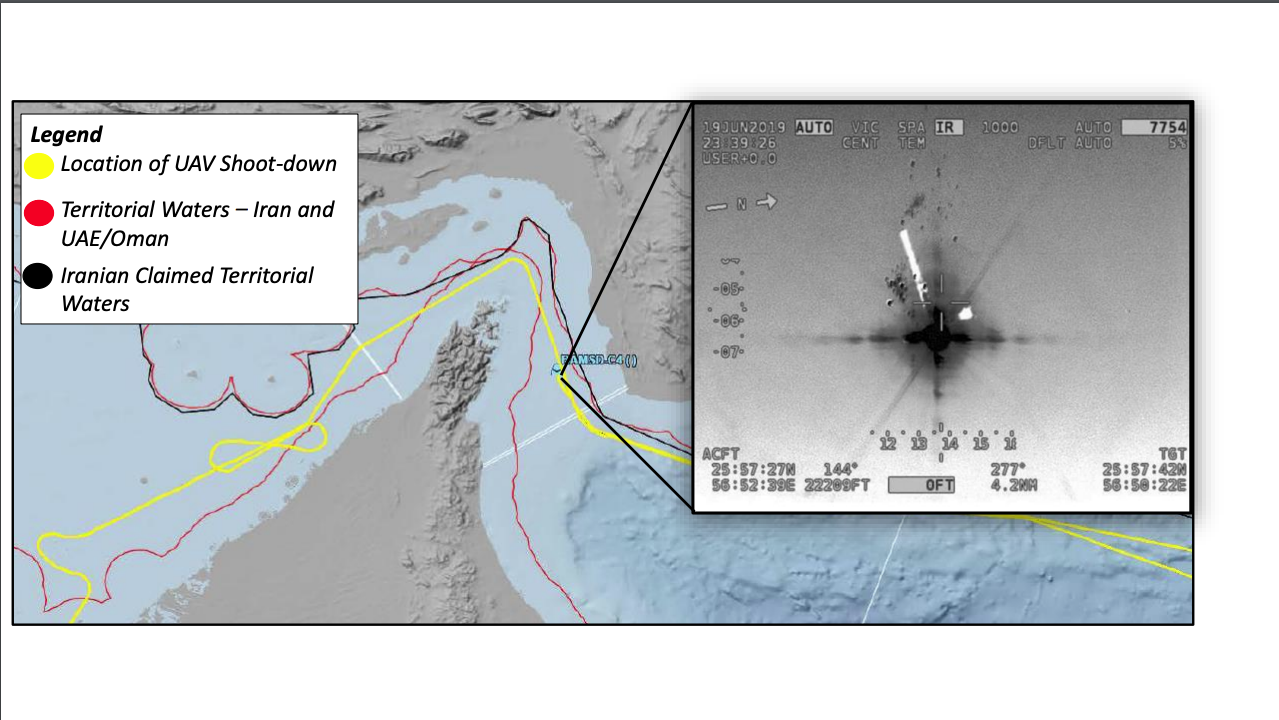 ISR flight path and grid plot for the RQ-4A shot down by Iran in the Strait of Hormuz. DoD Image

Starting in 2009, the Navy has deployed five BAMS-D for testing, primarily in U.S. Central Command. One crashed in 2012 and the status of the remaining aircraft is unknown. U.S. Naval Air Systems Command is responsible for the maintenance and operations of BAMS-D. Several messages left with Navy Program Executive Office, Unmanned Aviation and Strike Weapons spokeswoman Jamie Cosgrove by USNI News were not immediately returned on Thursday.

The shoot-down of the BAMS-D UAV follows two attacks on Air Force UAVs since tensions between Washington and Tehran rose in early May.

On Thursday, President Trump said the shootdown was “loose and stupid” and that Iran made a “very bad mistake.”

“I find it hard to believe it was intentional,” he said.

During the June 13 attacks of two petrochemical tankers in the Gulf of Oman, the U.S. claimed Iranian forces attempted to shoot down an Air Force MQ-9 Reaper. On June 6, a U.S. MQ-9 was shot down over Yemen by forces believed to be loyal to Iran.

The BAMS-D program is separate from the Navy’s effort in developing its own high-altitude UAV based on Global Hawk, called the MQ-4C Triton, which will start operating first from Guam and is set to achieve initial operating capability in 2021.

The first MQ-4Cs were supposed to be operating from Guam last year but the deployment was delayed following a September crash of one of the airframes in California.