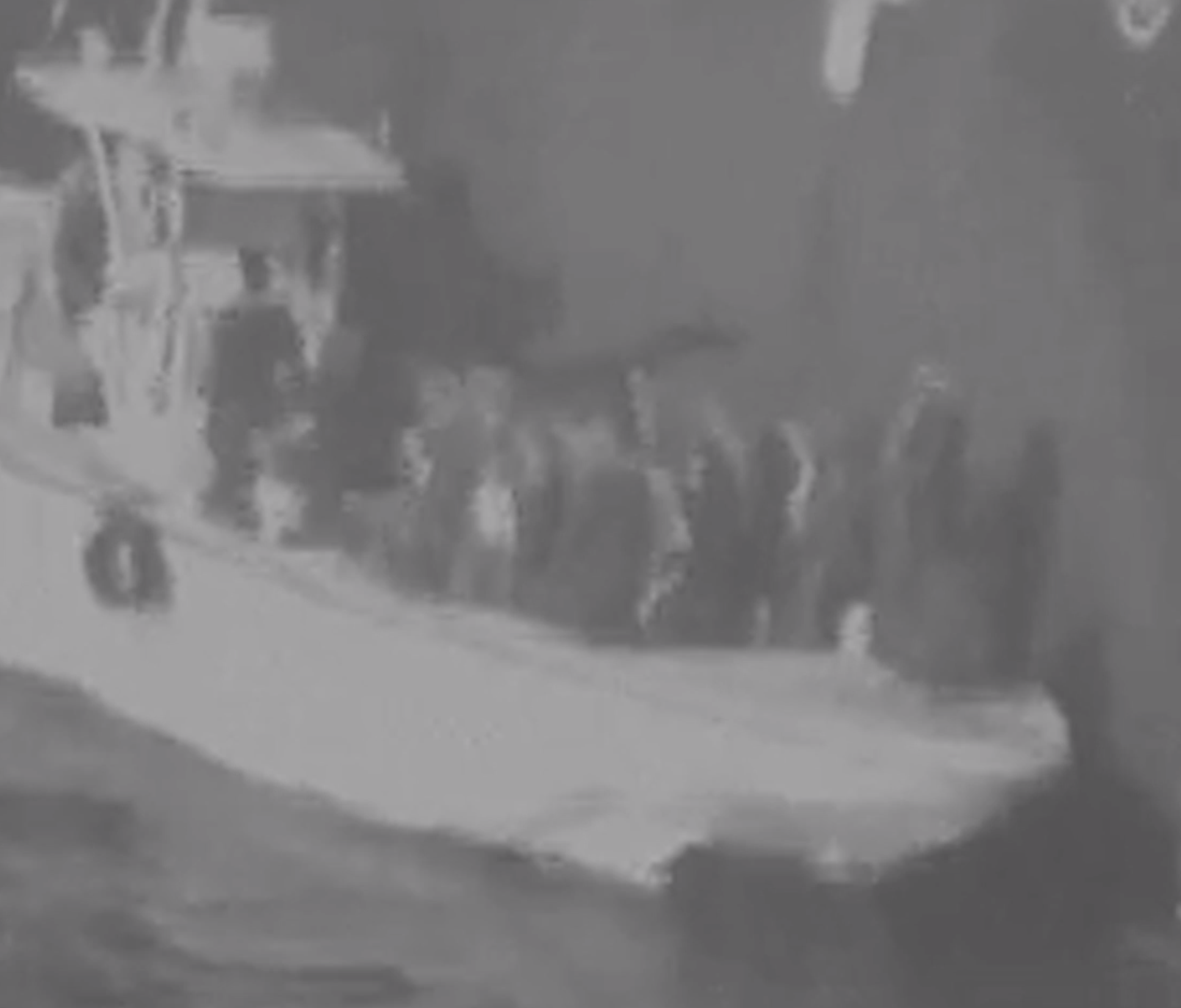 Screenshot of a US Navy video in which US Central Command claims Iranian forces are captured removing a limpet mine from Kokuka Courageous on June 13, 2019.

This post has been updated with a new statement from U.S. Central Command.

U.S. Central Command has released a video and photographs that officials say prove the Iranian Revolutionary Guard Corps Navy attacked two merchant tankers in the Gulf of Oman on Thursday.

As a result, the U.S. is sending a second warship to the vicinity of the two merchant vessels that were attacked in the Gulf of Oman on Thursday, U.S. Central Command said.

Guided-missile destroyer USS Mason (DDG-87) is joining U.S. forces assisting a merchant tanker that has been abandoned by its crew after suffering damage from what U.S. officials are calling a deliberate attack.

Earlier Thursday, the crew of destroyer USS Bainbridge (DDG-96) rescued the crew of a tanker that was allegedly attacked in the Gulf of Oman, officials told USNI News on Thursday afternoon.

“Twenty-one mariners from the M/V Kokuka Courageous, who abandoned ship, were rescued and are currently aboard USS Bainbridge,” according to U.S. Central Command spokesman Army Lt. Col. Earl Brown.
“Bainbridge remains in close contact with the M/V Kokuka Courageous and is the on-scene U.S. command authority. No interference with USS Bainbridge, or its mission, will be tolerated.”

Kokuka Courageous, had initially reported damage to its starboard hull in an unspecified security incident. Iranian state television issued video of Front Altair burning from a hull breach on the starboard side of the ship. 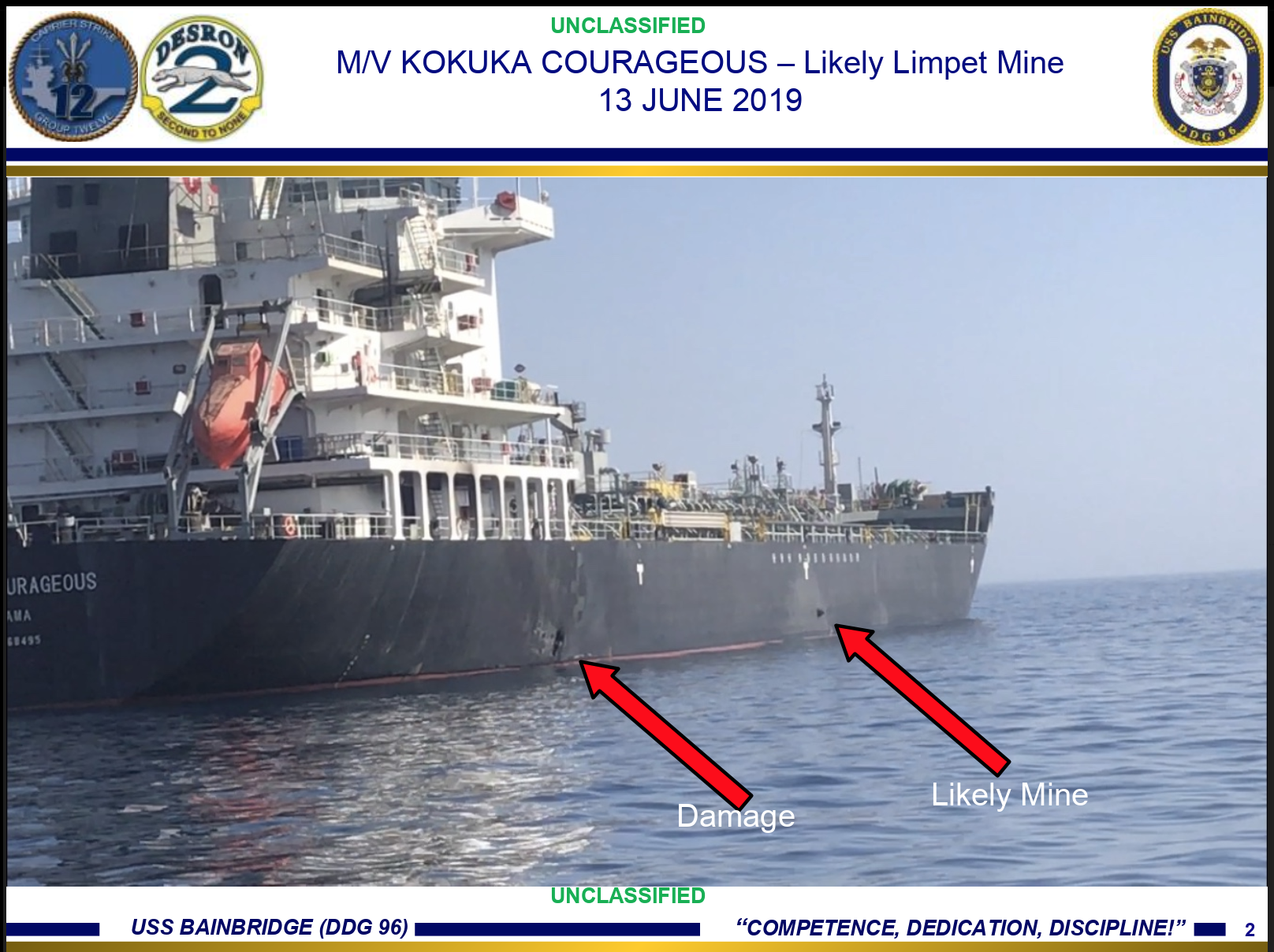 Late Thursday, U.S. Central Command released a timeline of events that officials say show Iranian involvement in the attack along with photos and a video claiming Iranian Revolutionary Guard Corps Navy units were responsible for limpet mine attacks on the two ships:

The Japanese owners of Kokuka Courageous said there ship was hit twice over a period of hours, according to a report in the Financial Times.

“Kokuka Sangyo said it had received a report that the Kokuka Courage was hit by two shells, three hours apart,” read the report. “A company official said: ‘The first shell hit to the rear of the ship on the port side . . . The second shell then hit port amidships.”

On Thursday afternoon, Secretary of State Mike Pompeo issued a statement blaming Iran for the attacks via Twitter.

It is the assessment of the U.S. government that Iran is responsible for today’s attacks in the Gulf of Oman. These attacks are a threat to international peace and security, a blatant assault on the freedom of navigation, and an unacceptable escalation of tension by Iran. pic.twitter.com/cbLrWNU5S0

“The Norwegian Maritime Agency said that three explosions were reported on board the Marshall Islands-flagged Front Altair oil tanker, which is owned by the Bermuda-based Norwegian company Frontline,” CNN reported. “The company said that a fire broke out after an explosion and that the cause of the blast was unclear.”

The 23 crew members were rescued by the South Korean cargo ship, Hyundai Dubai before being transferred to an Iranian naval vessel and taken to an Iranian port.

Japanese officials told The Wall Street Journal that the oil on both tankers was bound for Asia. During the attacks, Japanese Prime Minister Shinzo Abe was meeting with Iran’s sectarian leader Ayatollah Ali Khamenei in Tehran.

“We voice concern about the suspicious incidents which happened today for the oil tankers affiliated to Japan concurrently with a meeting between the Japanese prime minister and Supreme Leader (of the Islamic Revolution Ayatollah Seyed Ali Khamenei),” Foreign Ministry Spokesman Seyed Abbas Mousavi said in Twitter, according to Iranian state-controlled media.

Last month, the U.S. moved the Abraham Lincoln Carrier Strike Group early from the Mediterranean Sea to the Middle East based on intelligence “a number of troubling and escalatory indications and warnings,” Bolton said at the time.

Norfolk, Va.-based Bainbridge and Mason are attached to the Lincoln CSG. As of Thursday, USS Abraham Lincoln (CVN-72) was in port, USNI News has learned.