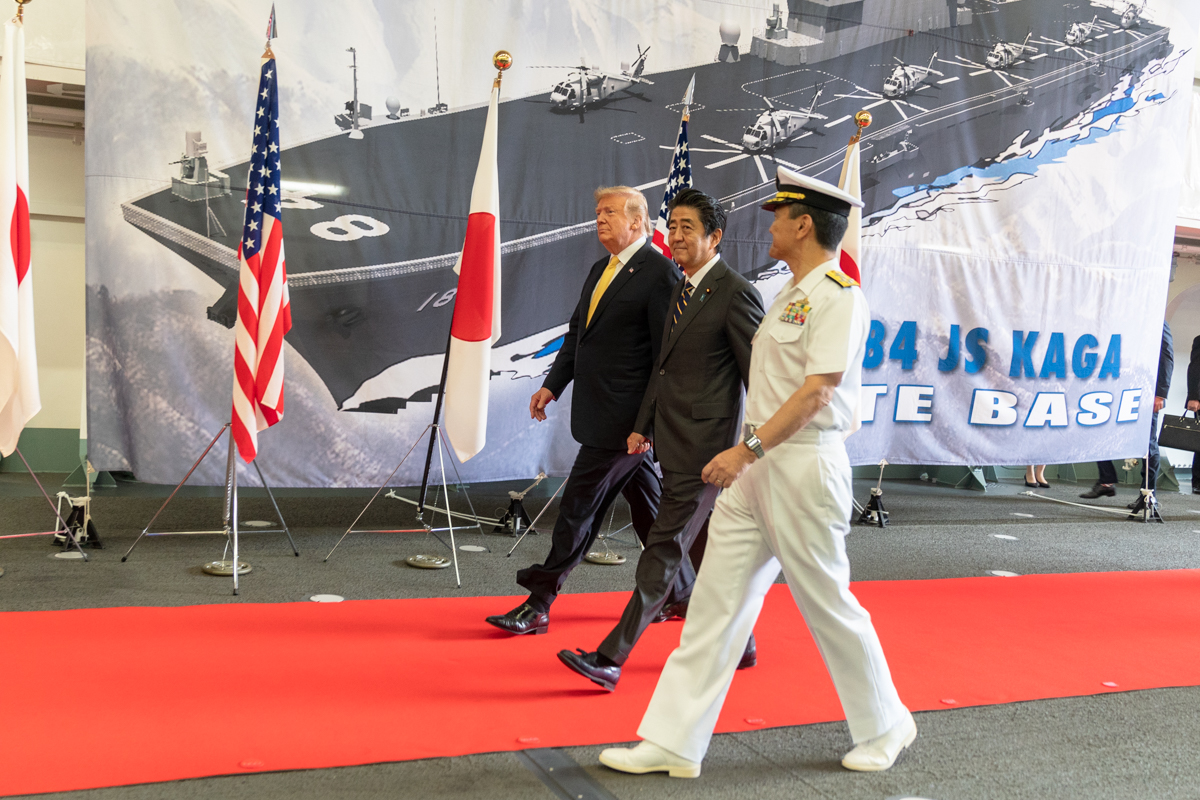 When President Donald Trump visited Japan this month, he was taken on board JS Kaga, one of a pair of new Izumo-class helicopter carriers built for the Japan Maritime Self Defense Force (JMSDF) set to be retrofitted to fly the F-35B Lighting II Joint Strike Fighter. The carriers represent a new approach to maritime security that is shifting to a more forward defense posture.

In March, the JMSDF took delivery of a new Soryu-class diesel-electric submarine (SSK). Named Shoryu, the SSK is the 10th out of an expected total of 14 boats of this class that will further enhance the submarine force’s already powerful sea-denial capability that can prevent adversary naval forces from approaching Japanese waters.

The JMSDF has a very specific role: to provide the full range of naval anti-air warfare (AAW) and anti-submarine warfare (ASW) missions and an intelligence, reconnaissance and surveillance (ISR) capability to defend Japan from the air and sub-surface threats presented by regional neighbors like China and North Korea. As such, the JMSDF has an inventory of powerful modern destroyers and submarines that can protect Japan and its maritime territory from any encroachment or attack.

Jim Schoff, a senior fellow with the Asia Program at the Carnegie Endowment for International Peace, told USNI News that, from the U.S. perspective, there is “a lot of praise” for the defense review that emphasizes jointness, interoperability and a focus on threats in new domains – and that has a sizable budget for five years.

However, he added that “some would like Japan to go further on the jointness in a way that might have taken some resources away from the Ground Forces and re-distributed them more to the maritime and air services, because overall the numbers don’t change that much in terms of the balance of where the budget is going.”

The issue is that the Japan Ground Self-Defense Force (JGSDF) still takes the lion’s share of the budget and resources compared to the JMSDF and Japan Air Self-Defense Force (JASDF) – about 60 percent of total Japan Self-Defense Force manpower is with the ground force. This is despite the lack of any land threat, and this has created resentment in the other services which are being asked to do more.

“There is some grumbling,” Schoff said. “The JMSDF is being asked to do a lot. They are deploying more, farther away, and they are a big part of the plan to deal with East China Sea contingency, but not necessarily getting a whole lot more resources.”

In addition, the Japanese services remain very stove-piped and rarely talk to one another, keeping to their traditional methods and lines of communication. This is severely limiting to Japan’s military. While most modern militaries have been breaking down service barriers to enhance capability across the sea, air and land spectrum and speed up information flow and response times by sharing resources, this has not happened in Japan.

“This was something Japan identified during after-action reviews of the 3/11 disaster response in 2010 after Fukushima crisis,” Schoff said. “They felt acutely the challenges, problems and inefficiency of the response in some areas because they lacked that element of jointness. They all were using different types of communications equipment and they had to route things through different nodes. The JMSDF couldn’t communicate directly with ground forces, even if they were very close to each other – it all had to be re-routed back through Tokyo.”

Although a joint staff had been created, the role of chairman was too large, being responsible for providing information to political leaders as well as running operations. The National Defense Program Guidelines did not create a new position of chief of operations position to split up these responsibilities, as was expected. Instead, Schoff said Japan has increased the capabilities of the Joint Staff, but it is still not a truly joint command.

“You still have the situation where the ground command is for ground, the maritime commander is for maritime; so although they coordinate, they don’t take orders from anybody else.”

One of the highlights of the National Defense Program Guidelines was the announcement that the two Izumo-class helicopter carriers (classed in Japan as destroyers) would be converted to launch and recover the F-35B fighter. Up to 40 of the short-takeoff and vertical landing variant of the aircraft are expected to be bought, in addition to the conventional F-35A variants already being bought by the JASDF. The F-35Bs will be operated by JASDF pilots, which means that the maritime and air defense forces will have to learn to work together to provide the carrier capability.

“I support it, and I think most in the U.S. agree with the idea of the F-35B in terms of deployment flexibility, but primarily as a land-based option because they have so many little runways and places they could stash them along the Ryukyu island chain,” Schoff said.

He added that there were concerns that the retrofit of the Izumo-class ships would be “more of a distraction and not worth the investment,” but he said the conversion of the carriers would not be too expensive.

The modifications will require strengthening of the flight deck with heat-resistant coating; a change in the internal layout of the flight deck to provide more space for the aircraft, weapons and stores; and a ski-ramp on deck. This capability would allow F-35Bs to be used in deployments to the Indian Ocean and in the more remote island chains to the southeast of Japan, such as Okinotori-shima and other more remote places with fewer land-based air defense options.

If an adversary like China wanted to pressure Japan’s outlying islands, “this was a solution, at least on paper, and at least it gives some supplemental options in refueling and maintenance,” Schoff said. “If you have deployed some F-35s and they land on some small islands in the Okinawa chain, it gives some additional flexibility.”

Meanwhile, the JMSDF is enhancing its surface fleet with the introduction of new destroyers and frigates, and it is expanding its submarine force from 16 to 22 boats. Felix Chang, a senior fellow at the Foreign Policy Research Institute, told USNI News: “The most important part of the new guidance, in my opinion, was probably the planned growth of its submarine fleet. While the GSDF and ASDF can help the MSDF counter Chinese surface combatants, only the MSDF’s submarines and (anti-submarine warfare) assets can counter China’s burgeoning number of diesel-electric and nuclear-powered attack submarines.”

Kawasaki Heavy Industries (KHI) and Mitsubishi Heavy Industries (MHI) have been building Japan’s latest Soryu-class SSKs on a steady annual drumbeat since 2009. The Soryu-class have an X-shaped rudder and are larger than the earlier Oyashio-class. The remaining four boats to be built will be equipped with lithium-ion batteries to increase the endurance of the SSKs. The first of these, Oryu, will be commissioned in March 2020, with the rest to follow through 2024. These will add to the existing Oyashio-class SSKs, at least eight of which will need to stay in service to achieve the 22-strong fleet demanded in the recent review.

“More challenging, however, will firstly be funding the maintenance of a larger fleet (of both submarines and surface combatants) with only a low single-digit percentage increase in the MSDF’s budget; and secondly, creating new crews for the larger fleet without increasing the overall number of MSDF personnel,” Chang said.

The newest ships to enter service are the two Asahi-class (25DD) ASW destroyers that were built by MHI and were commissioned in 2018 and 2019. The pair will accompany the four Akizuki-class (19DD) destroyers that entered service from 2012 to 2014, and a further class of two destroyers – referred to as 33DD – will follow. The new 33DD ships will be based on the Asahi-class design, and a procurement program is expected to be approved in 2021, with the first ship slated to be delivered by 2024. Construction is to take place at KHI, but a contract has yet to be signed.

In the anti-air warfare domain, the JMSDF is set to receive two Maya-class (27DD) destroyers that will be equipped with the latest Aegis combat management system baseline, cooperative engagement capability (CEC) and the full range of Standard Missile-2, SM-3 and SM-6 missiles and sensors that will provide an enhanced ballistic missile defense (BMD) capability and integration with the U.S. Navy compared to the earlier Atago-class destroyers. The Mayas are being built by Japan Marine United (JMU), with the first vessel due to enter service in March 2020 and the second following a year later.

The JMSDF is also recapitalizing its frigate fleet with its 30DX program to build eight ships that will replace the aging Asagiri-class and Abukuma-class light destroyers. Two ships are under construction at MHI and Mitusi Engineering and Shipbuilding (MES), with the first ship to be delivered by MHI in 2022. A contract for a second batch of two ships is expected that will be delivered from 2023. 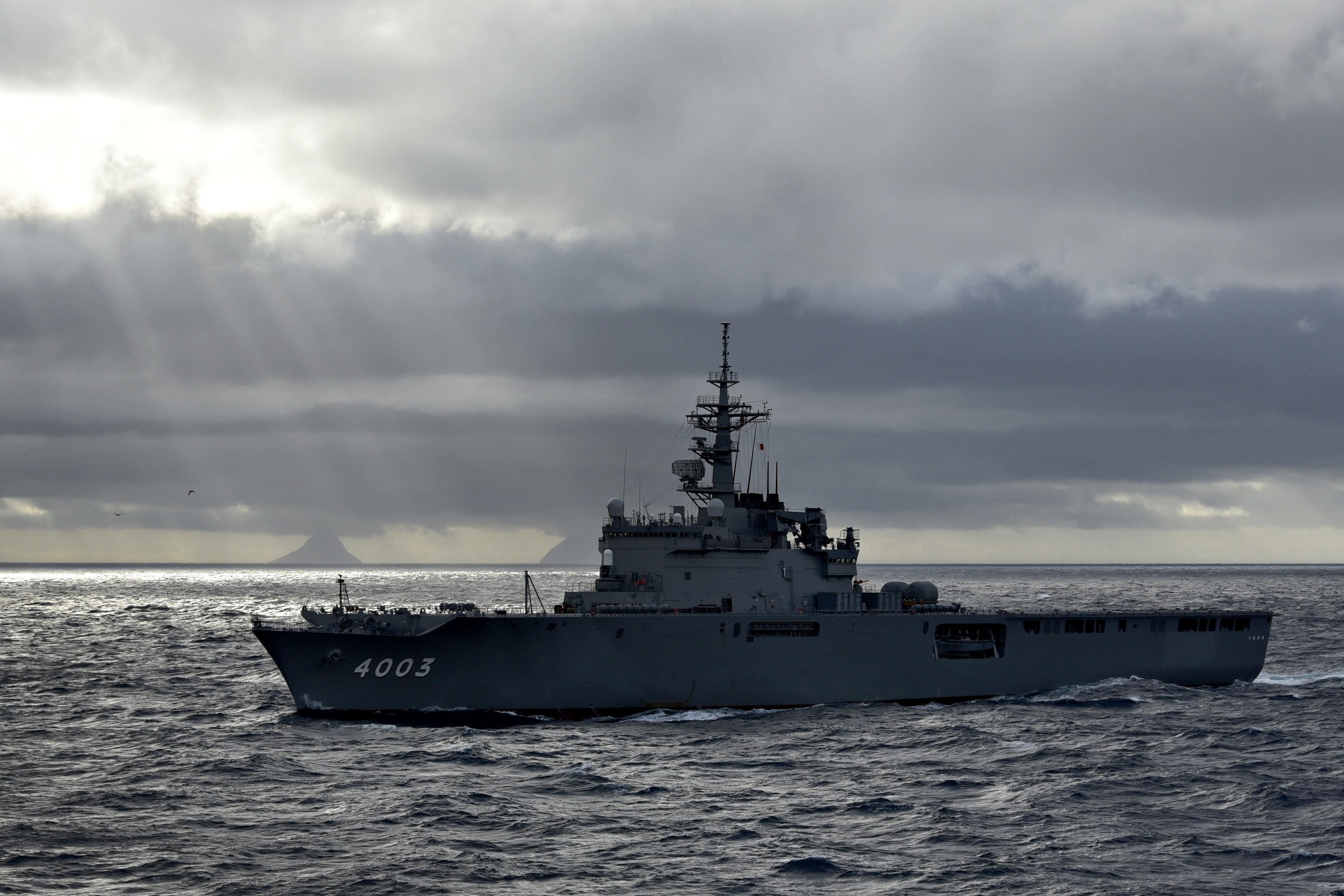 While some in Washington may be envious that Japan has a reliable five-year defense budget to work with, overall there are concerns in the U.S. about whether the Japanese defense budget can sustain all the demands put on it. The National Defense Program Guidelines and Medium Term Defense Plan are ambitious, but with spending pegged at just over one percent of GDP and unlikely to rise, there are questions about whether the JMSDF will get all the platforms it wants.

“Can Japan really buy all those F-35s and make investment in space and new domains and have missile defense improvement and other capabilities and keep it attractive to recruit soldiers, sailors and airmen to give the lifestyle and retain top quality people? That will cost money down the line,” Schoff said.

Although Japan may not achieve all the aims expressed in its defense plan, it pays to be ambitious. If in the future China and North Korea become more aggressive, the political support to increase defense spending would allow an expansion of the military and the acquisition of the capabilities the maritime service desires.