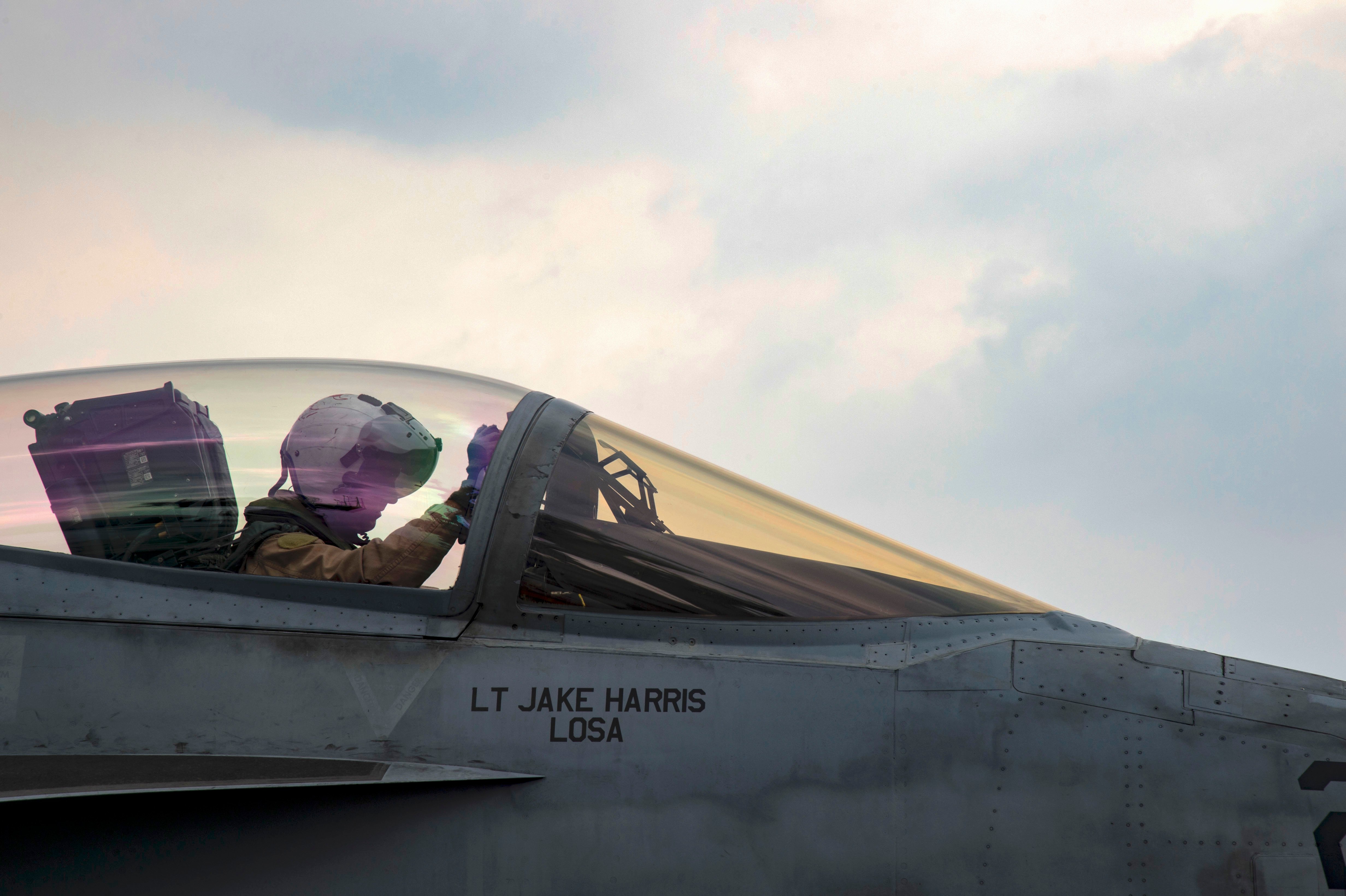 ARLINGTON, Va. – With the Navy ruling out contaminated air and focusing on air pressure fluctuations as the cause of many physiological events (PEs), the service is planning a major maintenance event on its jets to try to curb PE rates.

After rates of PEs spiked in 2017, the Navy conducted a four-star review of the problem and determined it needed a Physiological Episodes Action Team to coordinate cross-community efforts.

Luchtman said a key challenge in the early days of PEAT’s work was that these older aircraft are not digitized in the same way that a new Joint Strike Fighter is, for example, and so the team couldn’t pull all the data they needed related to the airplanes and the aircrew to understand what was happening. After an extensive effort to add sensors and monitors throughout the aircraft, PEAT has homed in on cockpit pressure fluctuations as the cause of many PEs – and premature failure of certain components as the cause of that pressure fluctuation.

“What we found is that, when components fail within the Environmental Control System … sometimes the air fluctuates within the cockpit, and sometimes those fluctuations lead to symptoms on the part of the aircrew within that cockpit,” said Luchtman, who has led PEAT since August 2018.

PEAT has “identified the components that are more likely to fail earlier than we anticipated originally, and those components are under redesign right now.”

Luchtman said a similar effort already happened with the legacy Hornets: seven components within that plane’s Environmental Control System were identified as being more likely to fail earlier than expected, and in Air Frame Bulletin 821 the Navy outlined an ECS reset program for squadrons’ maintenance crews to inspect those components and replace them if they exceeded the newly established life limits. 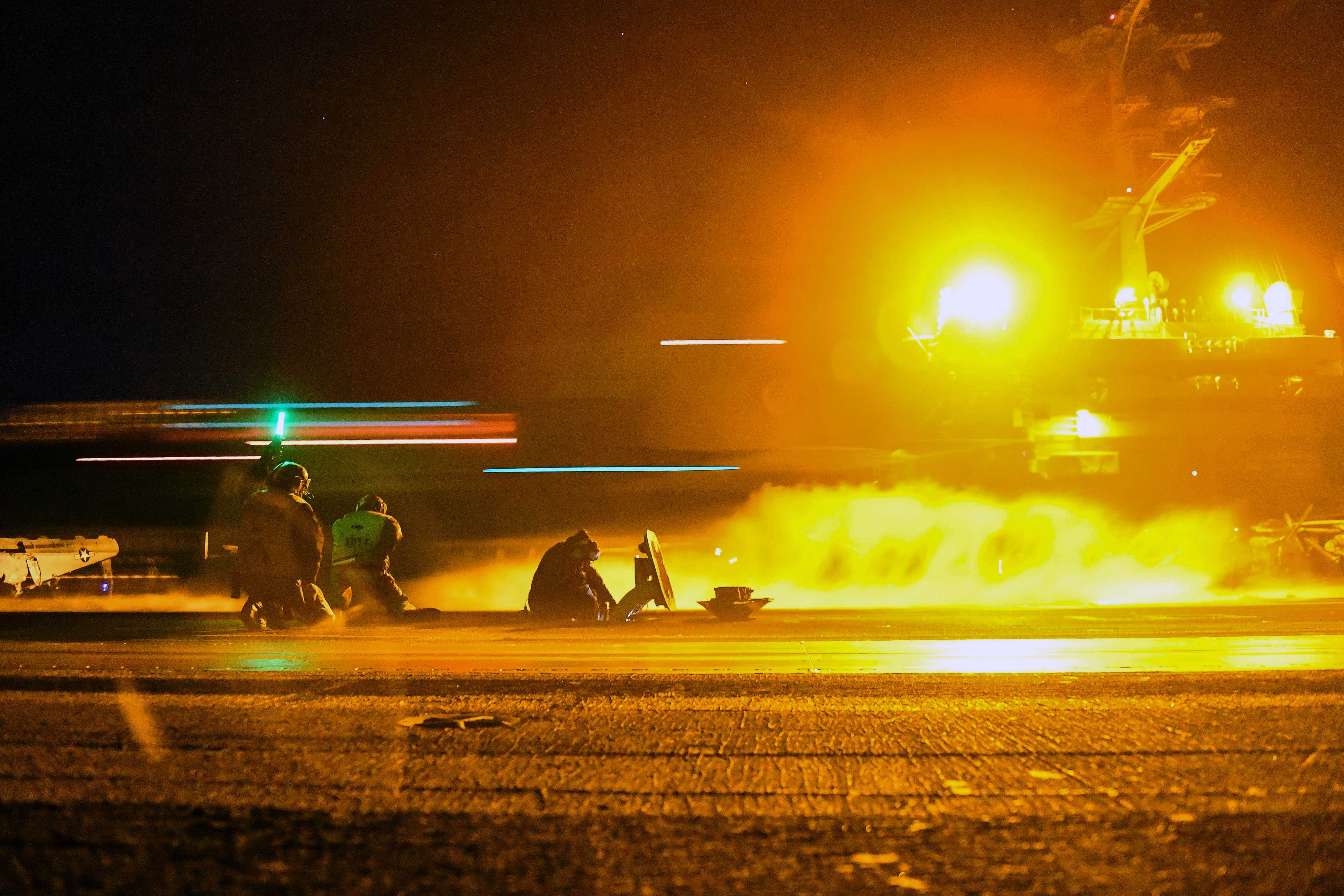 An F/A-18 Super Hornet launches from the flight deck aboard the Nimitz-class aircraft carrier USS Harry S. Truman (CVN-75) in the Norwegian Sea on Oct. 27, 2018. US Navy Photo

“That resulted in great improvement in the pressure stability within the F-18, at least the legacy,” Luchtman said.

According to Navy written testimony to the Senate, the ECS reset in the legacy Hornets led to a nearly 50-percent reduction in PEs. Overall, the testimony adds, “the F/A-18 Root Cause Corrective Action team has identified premature component failure as a contributory factor in almost 300 PEs.”

In addition to replacing more components whose failures may contribute to PEs, the Navy is about to undertake a massive effort to install the Cockpit Pressure and OBOGS Monitoring Systems (CPOMS) system in more than 1,000 Hornets, Super Hornets and Growlers.

CPOMS will add two key monitoring systems: it will measure the quality of the air coming out of OBOGS, even though the Navy has determined that air contamination is not currently an issue in its jets, and it will replace an analog pressure indicator with a digital system that monitors cockpit pressure, records fluctuations and warns the air crew if the pressure falls or rises outside of specifications.

“CPOMS involves some pretty significant engineering modification to the aircraft. That will be done by professionals from Boeing, and it’s going to take 10 to 14 days per aircraft, times over 1,000 aircraft. We’ve never done anything of that scale before,” Luchtman said, calling this a “significant” effort and the largest type/model/series modification the Navy has ever undertaken. But he stressed that safety is always the Navy’s top priority, and PEs have become naval aviation’s top priority, making this large effort worth it.

Boeing engineers will conduct the CPOMS installation at the planes’ home stations, in a separate area where the engineers can work on multiple jets from multiple squadrons at once. The overall effort will take about two years. Luchtman said the CPOMS system would eventually be designed into the Super Hornet Block III design so that new jets coming off the production line would have this monitoring system as well.

Luchtman said he was confident that the planes are safe for use and that, as long as failing components were replaced in a timely manner, the PE situation could be managed. 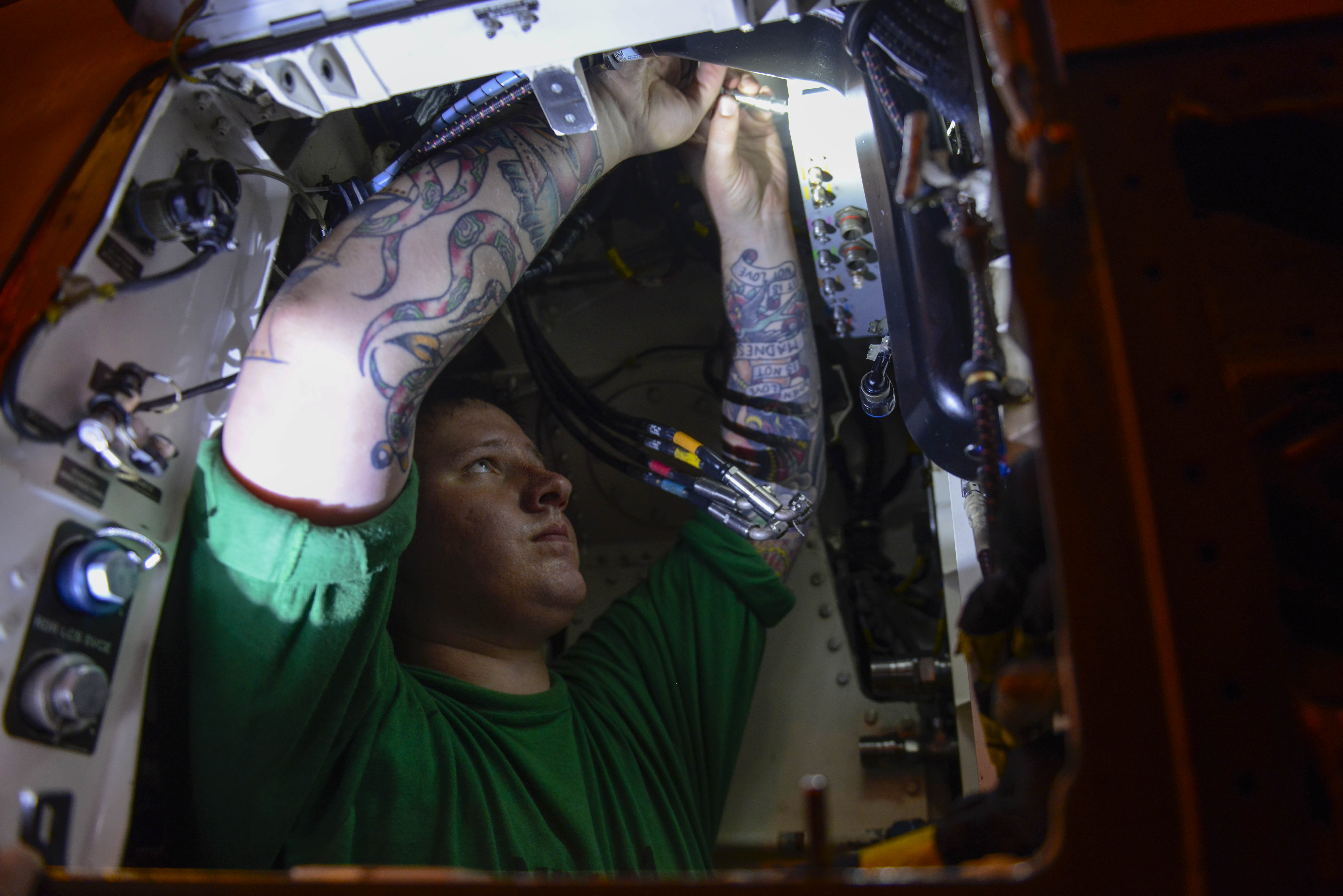 “There is no fundamental design change in ECS from Block I to Block II to Block III (Super Hornets). There are minor changes, but there’s no fundamental design change,” the admiral said.
“We should expect that system to function within specification all the time. The fact that it isn’t points to the fact that components fail, and that’s where we need to focus our effort.”

In fact, Luchtman and the PEAT are pushing a pilot program now that gets close to predictive maintenance on ECS, monitoring the performance of the system so closely that failing components could be identified just before they fail, allowing maintainers to replace them before they have a chance to fail, cause cockpit pressure disruptions and lead to air crew becoming sick.

The data coming off the CPOMS and off slam sticks that aircrew carry to record pressure during flights, in combination with data the planes record on their own system performance – “when you pair this pressure data with that data from the aircraft, you can do phenomenal things. … If you pair those two pieces of information, look at what the cabin pressure was doing at the time, look at what the aircraft was telling you with respect to the valves were doing at that time, you can identify specific behavior within the Environmental Control System and you can identify specific parts in that system that may be getting ready to fail.

“So in other words, what I’m telling you is, we are almost to the point where we can get predictive with our data analytics, to the point where we receive information from the fleet, we analyze that information, and then we can tell the fleet, hey this particular aircraft is exhibiting signs that this particular part may be needing to be replaced pretty soon,” Luchtman continued.
“We’ve actually seen that in work – that program is called Hornet Health and Readiness Tool (HhART). HhART is having great benefit in the fleet.”

Luchtman said the HhART pilot program only applies to the Super Hornet and is taking place at Naval Air Station Oceana now. If it continues to go well it will be rolled out to the whole fleet.

It is unlikely that PEs will ever go away – they result from a complex relationship between the machine and the human body that the Navy still doesn’t fully understand. Luchtman said a study at the Navy Experimental Diving Unit’s Fluctuating Altitude Simulation Technology Chamber in Panama City, Fla., put 70 people through pressure fluctuation profiles that had actually caused PEs in pilots in real life previously, and none of the 70 people in the test felt any symptoms. 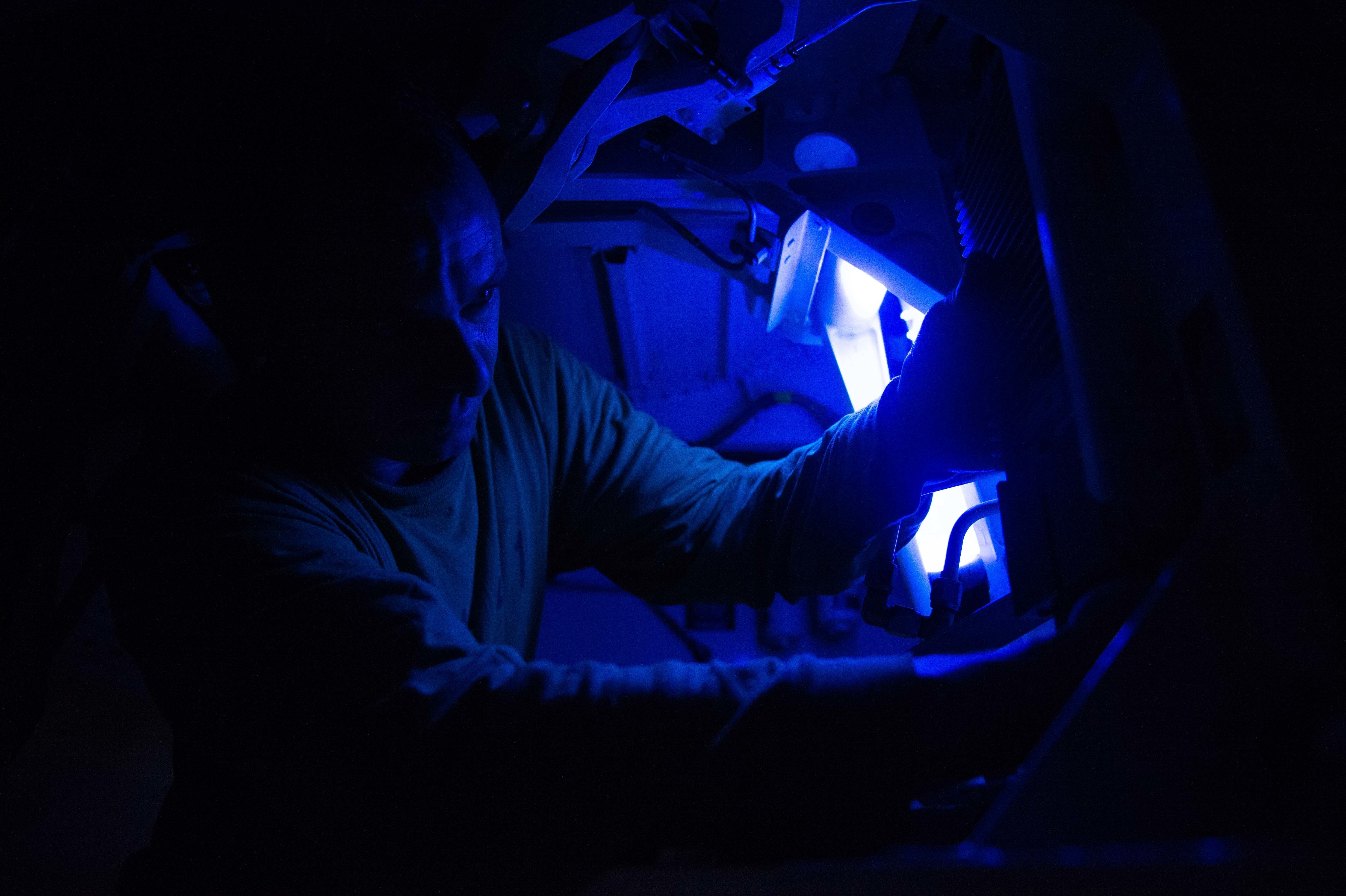 Though the relationship between the plane and the body is complex, the fixes the Navy is putting in place stand to have a noticeable impact on the fleet. Lt. Cmdr. John Supple, the spokesman for PEAT, told USNI News that, since the PE reporting process began in 2010, of those that are closed out – they were determined to be a physiological event, with symptoms in the aircrew and a problem with the aircraft – “about 37 percent fall into the category of Environmental Control System, about 31 percent fall into the category of Aircrew Oxygen System, and another 31 percent fall into the general category of ‘other.’ ECS could be something like the pressurization system not working properly, and AOS could be an instance where the air crew see the OBOGS degraded caution light. Other means it could be a mix, or a mix of other systems that is too complicated to just put in one of the other bins.”

Luchtman has been visiting squadrons to talk about PEAT’s research and upcoming changes, most recently visiting Japan to talk to the Navy’s air wing there and forward-stationed Marine Corps fighter squadrons. He told USNI News he always talks about each aviator as a weapon system, and while the Navy owes each aviator a fully functional plane, the aviators owe the Navy a well rested, well fed, well hydrated and well exercised human body to fight that plane. 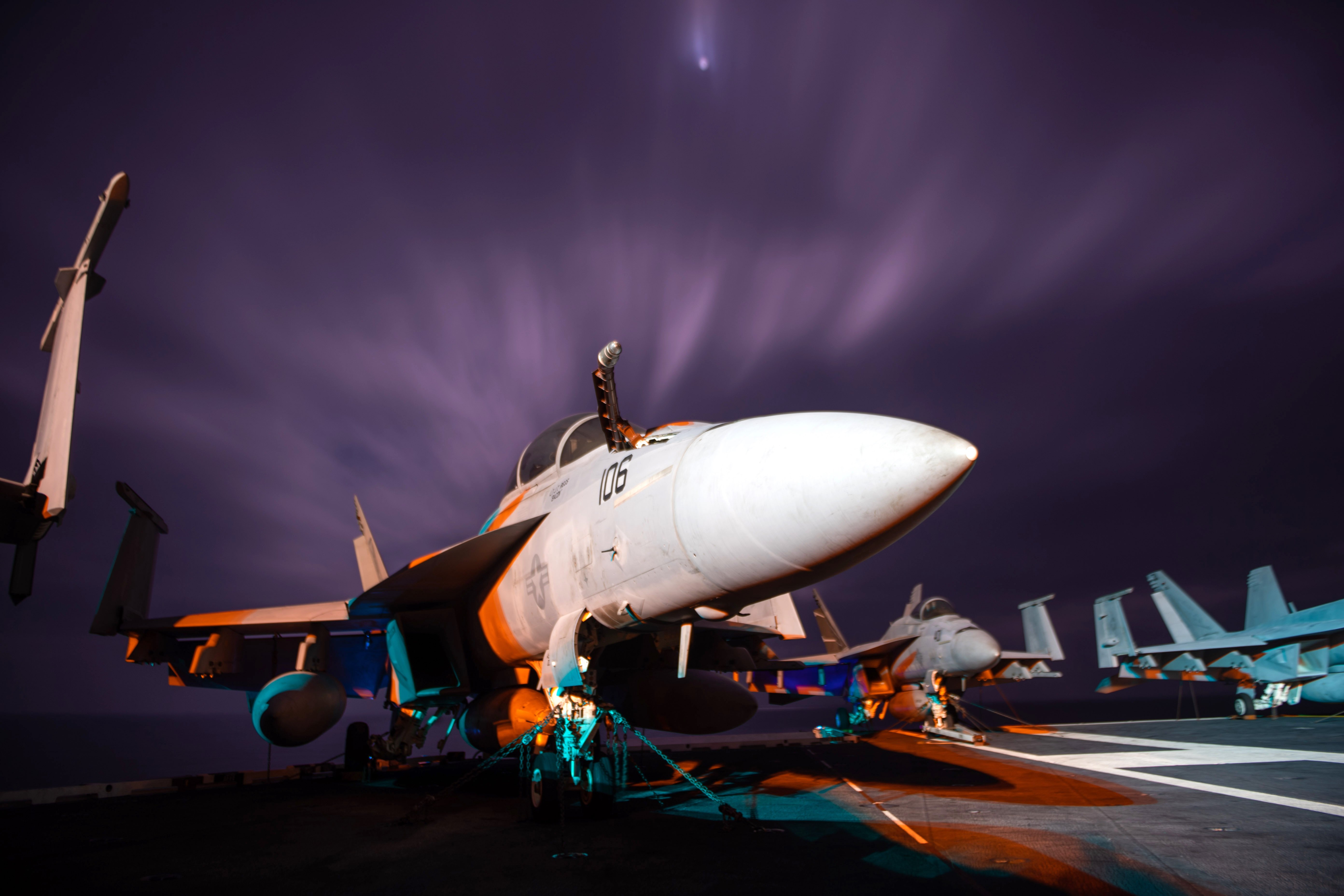 Luchtman said he’s been pleased with the backing PEAT has gotten from Navy leadership. He especially praised the service for not rushing to conclusions at the beginning, but rather taking a methodical approach to collecting and analyzing data and moving where the data tells them. For example, in 2017 a prevailing theory was that the OBOGS was proving pilots contaminated air – and while Luchtman said the engineering didn’t support that idea, there weren’t enough sensors providing data to disprove that theory. After adding in many kinds of sensors and testing more than 20,000 air samples, the Navy announced April 1 it had ruled out air contamination as a factor.

Luchtman praised the Navy as a whole, saying, “rather than pursue a chase for the smoking gun, recognize that this is a complicated problem and there is likely not going to be a single smoking gun, and allow time for the process to work, to gather the data, to analyze that data to point us to the areas where we think we can have the biggest impact. That patience on the part of our leaders has, I think, been the key to the success of our effort so far, because without that we would have been chasing shiny objects with no idea whether or not those efforts would have had any kind of success.”